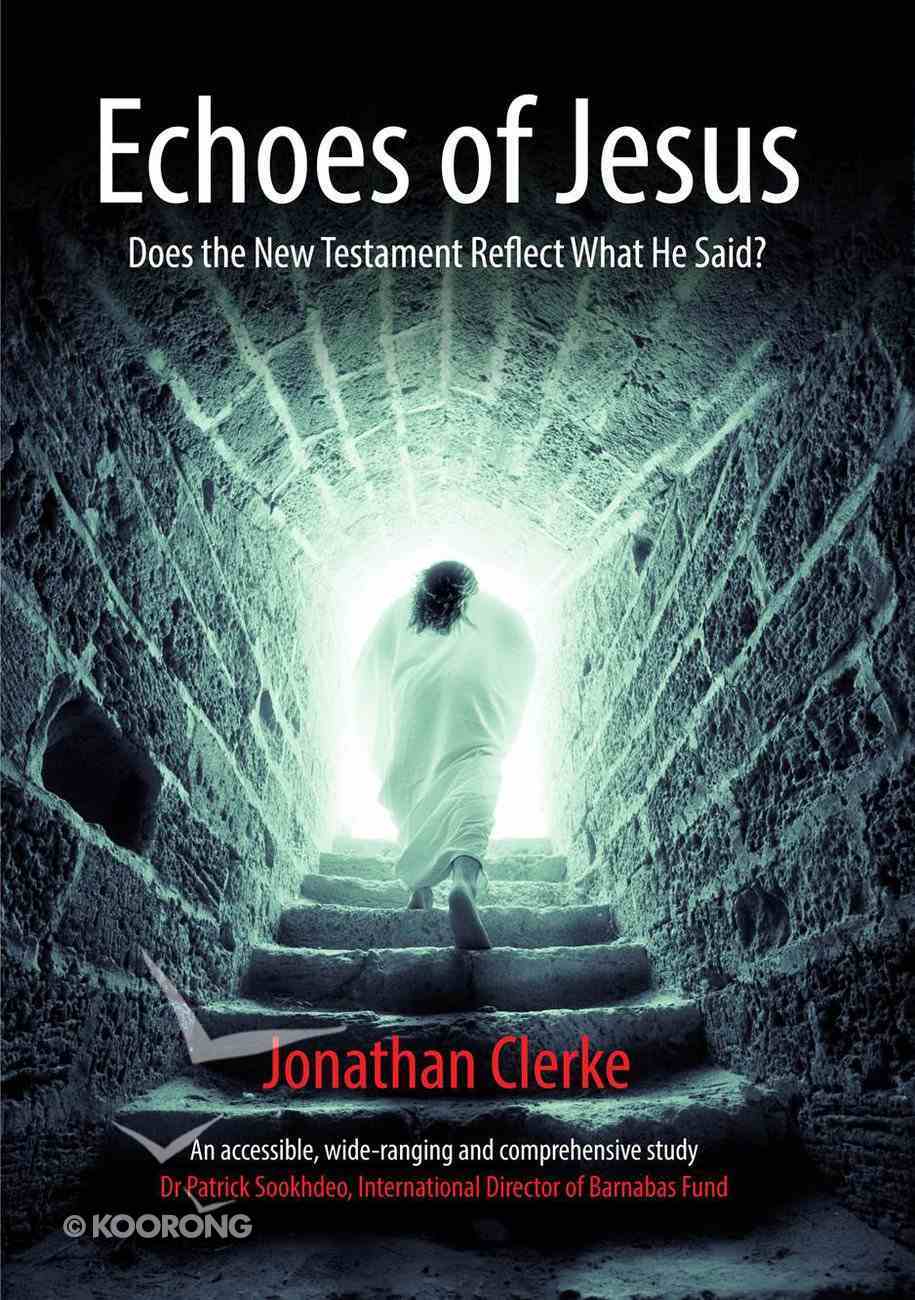 Echoes of Jesus: Does the New Testament Reflect What He Said?

Echoes of Jesus: Does the New Testamant Reflect What He Said? (2nd Edition)
Jonathan Clerke
Paperback

Echoes of Jesus: Does the New Testament Reflect What He Said?
Jonathan Clerke
eBook

Getting At Jesus: A Comprehensive Critique of Neo-Atheist Nonsense About the Jesus of History
Peter S Williams
Paperback

Are Jesus' words reflected in the pages of the New Testament?

Many find it impossible to believe Jesus' words were recorded accurately because he did not write the New Testament himself and there were no mechanical or electronic methods of recording his teachings. Furthermore, surely the hand-copying over the centuries must have distorted the original manuscripts.

This book presents evidence showing that the New Testament is an accurate portrayal of the life and teachings of Jesus, freeing the reader to accept the reliability of the message. The startling findings are covered in depth, yet without assuming the reader is familiar with Christianity or has significant background knowledge. Extensive research reveals the evidence itself, so that the reader can decide if the conclusions are reasonable. Echoes of Jesus is unique because it:

* illustrates how literate and historically aware the ancient civilisations were before and during the life of Jesus
* explains how it was possible for the first disciples to accurately record what Jesus taught and did
* provides a highly readable explanation of ancient New Testament documents and what they have to say about accuracy in copying over the hundreds of years
* discusses the content and credibility of non-Christian ancient literature that comment on Jesus and the first Christians.

New York Times bestselling books have taken the view that the oldest New Testament documents paint a very different picture to later copies. Others are of the opinion that the original gospel accounts were never intended to be historically accurate. Many people assume that the bias of the original NT authors distorted their recollections of Jesus, and Jesus' words were not put into written form for several decades, allowing distortion to occur.What would you say? What do you believe and why? Were Jesus' words recorded accurately by the gospel writers during Jesus' life & the making & copying of the New Testament? This highly readable account considers gospel textual criticism, Christian historiography, literacy & more. See evidence for the reliability of the recounting of Jesus.Echoes of Jesus equips you with evidence in an engaging manner, following along a logical journey of discovery. When you've purchased and read this book you will: - understand how literate and historically aware the ancient civilisations were - appreciate how it was possible for the first disciples to accurately record Jesus' life and teachings - have a highly readable explanation of early Greek New Testament documents and know what they have to say about accuracy in copying - know the content and credibility of non-Christian ancient literature that comment on Jesus and the first Christians. Rev Dr John Sweetman, D.Min (USA); Principal of Malyon College, Brisbane: This is a book for those who like to question and think and who are not satisfied with pat answers. This is an excellent resource for theological faculty and students as well as for anyone genuinely searching for truth. If you have questions or doubts about the identity of the real Jesus or the reliability of the Bible, this is the book for you. Dr Bernie Power, D.Th, lecturer in Islamic Studies: Echoes of Jesus is a very insightful and much-needed book in the area of apologetics. I plan to use it as a text in Australia's only theologically-accredited Apologetics to Islam course run at the Melbourne School of Theology.Dr James M. Leonard, PhD (Cambridge), former Adjunct Professor (LSU, Notre Dame Seminary, Loyola University, John Brown University, Arkansas, US): This well written work on the biblical account of the historical Jesus exposes the reader to key issues that are often overlooked in popular Christian apologetics. It raises the believer's confidence levels in the reliability of the Gospels and the apostolic writings, and should be taken seriously by scholars.Rev. Dr. Bernard Low, former Associate Professor in Systematic Theology at Singapore Bible College; PhD (University of Nottingham): Clerke's research establishes that: (a) there was a high-level of literacy in the ancient world including Jesus's; (b) people in the ancient world were not as gullible as critics of Christianity have claimed; (c) ancient historians were both professional and credible in their task of recording history; (d) as a master-teacher, Jesus employed methods which facilitated the remembrance and easy recall of his teachings; (e) the autographs of the New Testament were faithfully transmitted.Features of Echoes of Jesus - More than 104,000 words of text spread over more than 400 pages - More than 1,000 footnoted references, - Over 22,000 words of footnotes - Footnotes placed at the bottom of each page for easy reach
-Publisher

Jonathan Clerke has a Bachelor of Science with Honours majoring in zoology and parasitology, and a Bachelor of Physiotherapy. Both were obtained from the University of Queensland, Australia. He has brought his rigorous scientific training to bear on the question of the reliability of Scripture.