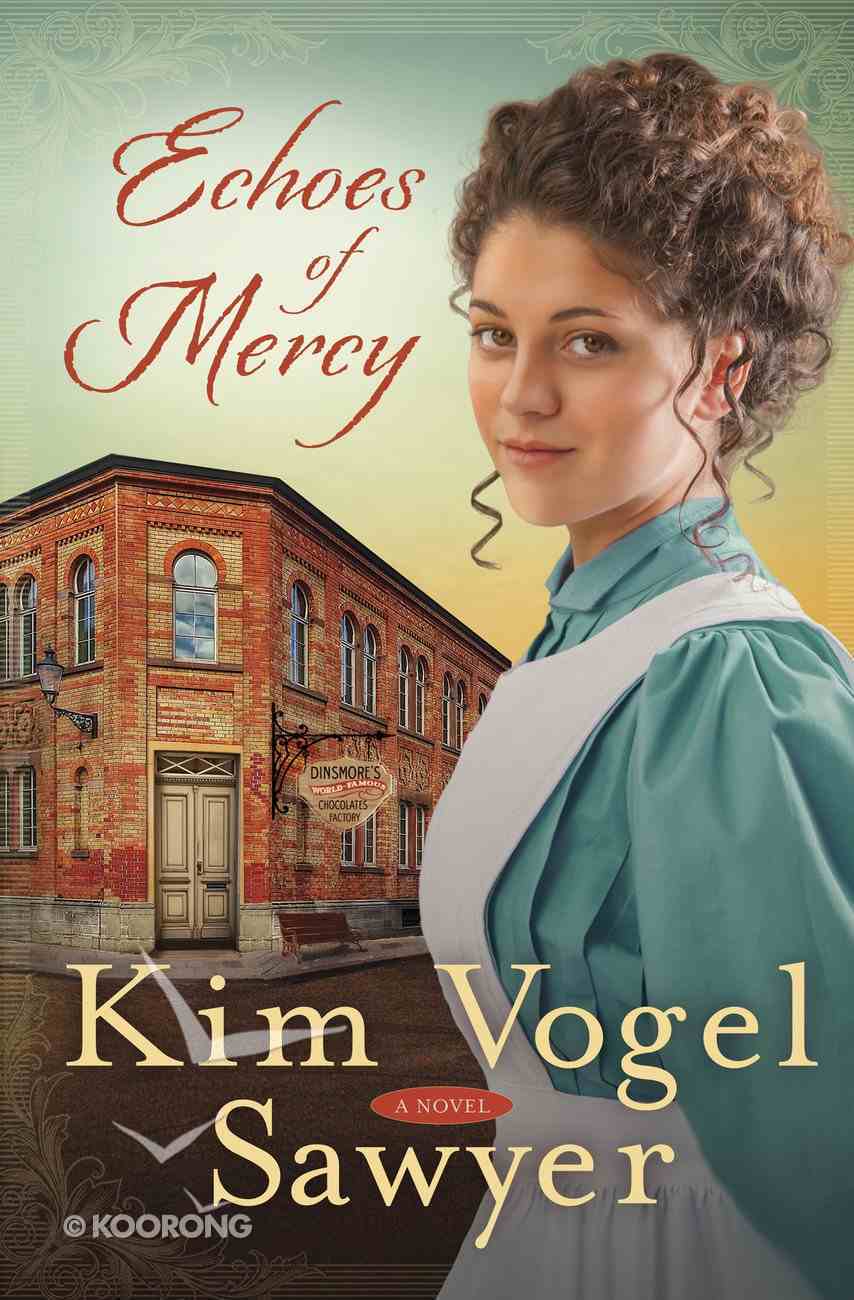 Sometimes a secret must be kept for the truth to be revealed. &#160; When a suspicious accident occurs at the famous Dinsmore Chocolate Factory in Sinclair, Kansas, Caroline Lang goes undercover as a factory worker to investigate the circumstances surrounding...

Sometimes a secret must be kept for the truth to be revealed.
&#160;
When a suspicious accident occurs at the famous Dinsmore Chocolate Factory in Sinclair, Kansas, Caroline Lang goes undercover as a factory worker to investigate the circumstances surrounding the event and how the factory treats its youngest employees&mdash;the child workers. Caroline&rsquo;s fervent faith, her difficult childhood, and compassionate heart drove her to her job as an investigator for the Labor Commission and she is compelled to see children freed from such heavy adult responsibilities, to allow them to pursue an education. &#160;&#160;
&#160;
Oliver Dinsmore, heir to the Dinsmore candy dynasty, has his own investigation to conduct. Posing as a common worker known as &ldquo;Ollie Moore,&rdquo; he aims to find out all he can about the family business before he takes over for his father. Caroline and Oliver become fast friends, but tension mounts when the two find themselves at odds about the roles of child workers. Hiding their identities becomes even more difficult when fate brings them together over three children in desperate need. When all is revealed, will the truth destroy the love starting to grow between them?
-Publisher

Caroline Lang slapped the thick packet of meticulously handwritten notes onto the center of Noble&rsquo;s leather desk blotter and then flopped into the nearest chair. The spindled legs slid on the glossy oak floor, raising a high-pitched complaint. Instead of apologizing for the scratches her carelessness had surely created&mdash;Noble was the most persnickety perfectionist she&rsquo;d ever known&mdash;she said, &ldquo;There you are. A completed report on accommodations for the sugar beet harvesters. I earned my week&rsquo;s leave with that one.&rdquo; She grimaced at her purple-stained fingertips. &ldquo;If I never see another beet, it will be too soon.&rdquo;

Noble had the gall to chuckle. &ldquo;Oh, now, Caroline, you didn&rsquo;t like beets before I sent you to Omaha. You&rsquo;ve always said they stink when they&rsquo;re cooking.&rdquo;

&ldquo;They do.&rdquo; She nodded emphatically, causing several escaping tendrils from her simple bun to bounce on her shoulders. &ldquo;And they don&rsquo;t have to be cooked to stink. You ought to smell them when they&rsquo;re just sitting in a bin in
the sun.&rdquo; Wearily she pushed to her feet. &ldquo;I intend to spend my week of leave sleeping. You know where to find me if you have any questions about the report, but I&rsquo;m sure you&rsquo;ll find it concise. I was trained by the best, after all.&rdquo; She
aimed a fond grin at her friend and mentor.

Noble set the leather-bound packet aside without peeking in it. &ldquo;You know I trust you, Caroline.&rdquo;

His simple comment warmed her, and she gave him another smile as she turned toward the door.

&ldquo;And since I trust you&hellip;&rdquo;

Something in his tone stilled her hand, which hovered midway to the polished brass doorknob. She glanced over her shoulder and caught him stroking his beard, his familiar sign of worry. She returned to the chair, seating herself
carefully this time. &ldquo;What is it?&rdquo; Fear struck, making her mouth go dry. &ldquo;Has something happened to Annamarie?&rdquo; She prayed Noble&rsquo;s sweet, frail wife hadn&rsquo;t met with harm while she&rsquo;d been away on an assignment. She loved Annamarie almost as much as Noble did.

&ldquo;But, unfortunately, I lost an investigator.&rdquo; Noble&rsquo;s face pinched into creases of sorrow. &ldquo;A fine man&mdash;Harmon Bratcher. He leaves behind a wife and two sons.&rdquo;

&ldquo;Oh no&hellip;&rdquo; As an investigator for the Labor Commission, Caroline knew they could meet danger. Sometimes entering workplaces to openly explore, other times posing as workers to observe the business practices on the sly, their presence was rarely welcomed and occasionally threatened. Even the required travel held various hazards. Each time she set out, Noble prayed over her for her safety. She depended on him and Annamarie praying her through the investigations. So far she&rsquo;d always come back unscathed. Tired, yes, but unscathed.

Her heart ached for poor Mr. Bratcher, for his family, and for Noble, who felt accountable for his agents.

Caroline rounded the desk and bent down to wrap her arms around Noble&rsquo;s shoulders and press her cheek to his. His thick white beard tickled her jaw, but she didn&rsquo;t pull away. He needed the comfort, and she needed to offer it. He patted her wrists in a silent thank-you. &ldquo;It has been difficult, I confess. I considered him a good friend.&rdquo;

Although Caroline couldn&rsquo;t claim Bratcher as a friend, she&rsquo;d met him and admired his strong stance on changing the laws concerning the age of workers in the United States. The coalition to end child labor had lost a strong proponent
with his untimely passing. She shifted to perch on the edge of Noble&rsquo;s desk, leaving one hand on his broad shoulder in a gesture of comfort. &ldquo;What happened?&rdquo;

&ldquo;According to the ruling from law enforcement officials, he broke his neck when he fell into an elevator shaft.&rdquo;

Such a horrific way to end one&rsquo;s life. But mixed with the horror, she experienced a niggle of wariness. &ldquo;You don&rsquo;t believe the ruling, do you?&rdquo;

Noble pinned her with a steady look. &ldquo;I suppose it could be true. Accidents happen, especially in factories. But the week before he fell, I received a telegram from Harmon saying he intended to sneak into the factory on Sunday&mdash;the
only day no workers were on duty&mdash;to retrieve questionable bookkeeping records he&rsquo;d glimpsed the week before. But he died before he could submit any other information. There were no documents on his body. So I can only surmise
he fell into the shaft before he laid claim to the records, or&mdash;&rdquo;

Noble nodded somberly. He caught her hand. &ldquo;Caroline, I know you just returned from an investigation. You&rsquo;re tired and have rightfully earned your week of rest. But there&rsquo;s an opening at the factory where Harmon died.&rdquo;

Caroline stiffened, anticipating his next request.

&ldquo;The opening is for a toter, a job generally given to women.&rdquo; His fingers tightened on her hand. &ldquo;You&rsquo;re my only female agent. Would you go to Sinclair, apply for the position, and use it to look into Harmon&rsquo;s death? I&rsquo;d need to
send you out on this evening&rsquo;s train.&rdquo;

The entire journey home she&rsquo;d anticipated a lengthy soak in a hot bath followed by days of lying on her comfortable feather mattress in a state of languor. The thought of departing that evening without even a few hours of rest made her want to groan. But how could she deny Noble when he&rsquo;d done so much for her? Noble went on. &ldquo;Of course, we can&rsquo;t make investigating Harmon&rsquo;s death your official reason for being there. We&rsquo;d be overstepping our bounds with the
local authorities. So, as far as the commission is concerned, you&rsquo;d be there to finish Harmon&rsquo;s report on the factory&rsquo;s safety features&hellip;or the lack thereof. Harmon sent several messages about his findings. He was especially concerned
about the number of underage workers at the factory, but he died before submitting a full report.&rdquo;

Caroline gave a start, her pulse speeding into a gallop. &ldquo;Underage workers?&rdquo;

Noble&rsquo;s lips formed a grim line. &ldquo;According to Harmon, this factory seems to have a disproportionate number of child workers.&rdquo;

Her tiredness melted in light of this new information. The opportunity to further her personal battle to end child labor and to put Noble&rsquo;s worries to rest concerning Bratcher&rsquo;s death proved too tempting to resist. &ldquo;I&rsquo;ll go.&rdquo;

The relief in Noble&rsquo;s face compensated for the loss of her hot bath and days of lazy recuperation. &ldquo;Bless you, Caroline. There&rsquo;s no one else I would trust with this mission.&rdquo;

His confidence in her both touched and terrified her. After all, one investigator had already died in the factory. Go with me, dear Lord. She drew in a deep breath and vowed, &ldquo;I won&rsquo;t let you down, Noble. I promise.&rdquo;