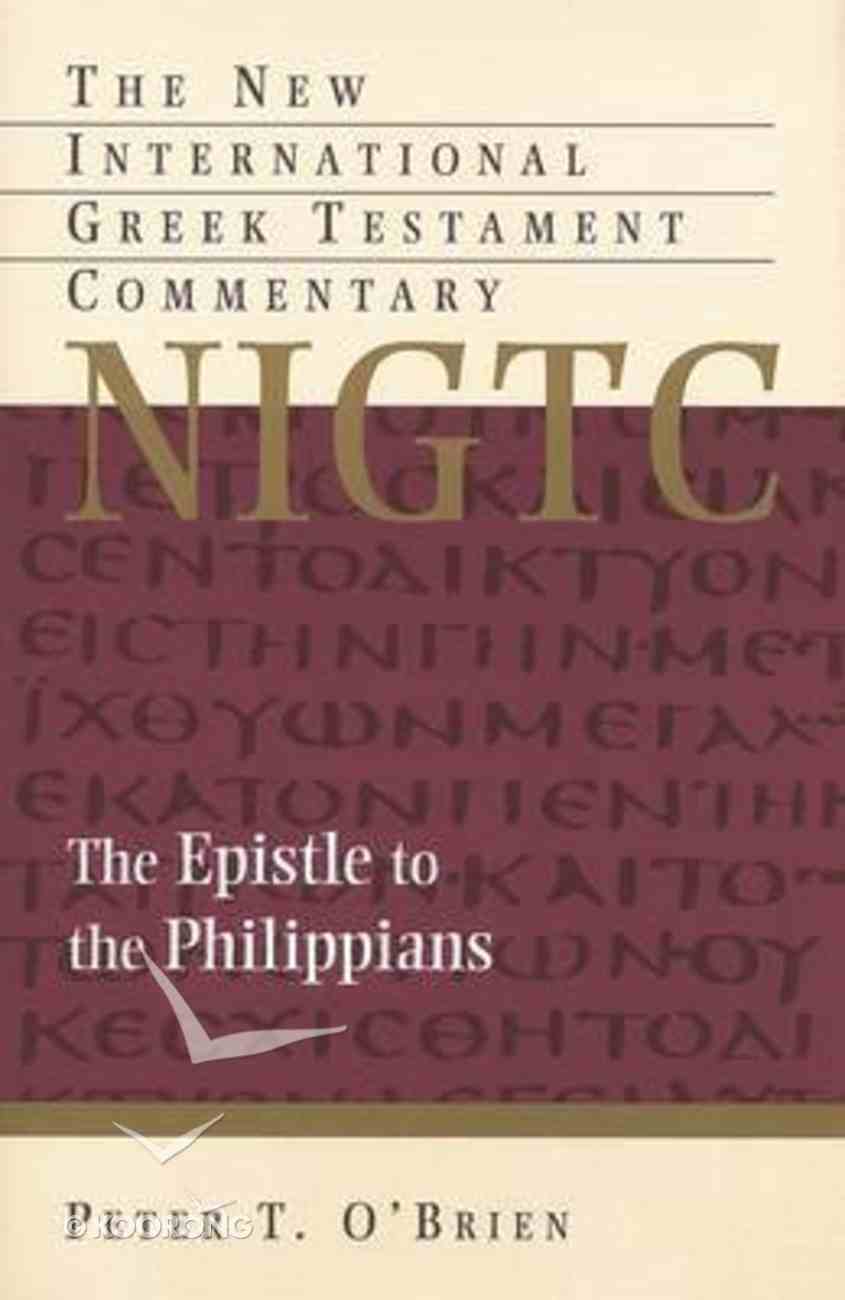 Paul's letter to the Philippians has been a favourite of Christians for almost two thousand years. Its themes of joy and fellowship, love and suffering, humility and perseverance strike responsive chords in many hearts, and the epistle-injunctions to stand firm...

Paul's letter to the Philippians has been a favourite of Christians for almost two thousand years. Its themes of joy and fellowship, love and suffering, humility and perseverance strike responsive chords in many hearts, and the epistle-injunctions to stand firm for the gospel and to remain united in love are as relevant to believers today as they were to the Philippians of Paul's day.

In this commentary Peter T. O'Brien presents a rich exposition Philippians. Based on careful historical-critical-linguistic of exegesis of the Greek text, O'Brien's work is fundamentally theological and makes available to the serious student of the New Testament the fruits of recent scholarship. O'Brien examines each paragraph of the text structurally, thematically, and exegetically to determine its place within the flow of the letter's argument and in the light of Paul's purposes for writing the epistle. Topics given particular attention include background information on the city of Philippi, the letter's authorship and date and place of writing, the unity and integrity of the letter in the light of recent structural studies, the nature of Paul's opponents and the question of the Judaizers, and the place and function of the Christological "hymn" (2:5-11) within the letter.
Award for the Print Edition
Christianity Today - No 2 Critic's Choice for Commentaries (1993)

"There can be no doubt that O'Brien's commentary on Philippians is the best available in English for careful detailed exegesis of the Greek text and judicious sifting of the interpretations of other scholars. His labours have put students of this letter in his debt for the invaluable resource he has supplied to aid their own close reading of the text."
---Journal of Biblical Literature
"This is a model commentary, carefully argued, well written, with sane judgments. O'Brien is well aware of the vast literature on this letter and interacts with it carefully; yet he has struck his own course. This is a superb guide to understanding both Paul and Philippians."
---Gordon D. Fee
-Publisher.

O'Brien's study on the Book of Philippians is a contribution to The New International Greek Testament Commentary, a series based on the UBS Greek New Testament and which seeks to provide thorough exegesis of the text that is sensitive to theological themes as well as to the details of the historical, linguistic, and textual context.
-Publisher

This commentary series is established on the presupposition that the theological character of the New Testament documents calls for exegesis that is sensitive to theological themes as well as to the details of the historical, linguistic, and textual context. Such thorough exegetical work lies at the heart of these volumes, which contain detailed verse-by-verse commentary preceded by general comments on each section and subsection of the text.

An important aim of the NIGTC authors is to interact with the wealth of significant New Testament research published in recent articles and monographs. In this connection the authors make their own scholarly contributions to the ongoing study of the biblical text.

The text on which these commentaries are based is the UBS Greek New Testament, edited by Kurt Aland and others. While engaging the major questions of text and interpretation at a scholarly level, the authors keep in mind the needs of the beginning student of Greek as well as the pastor or layperson who may have studied the language at some time but does not now use it on a regular basis.
-Publisher

Peter O'Brien (Ph.D., University of Manchester) is senior research fellow in New Testament, at Moore Theological College, Sydney, Australia. Dr O'Brien is an erudite scholar much akin to his dokvater Prof. Bruce, balancing exegetical precision, theological balance with pastoral warmth, this is especially evident in his four major commentaries The Epistle to the Philippians (The New International Greek Testament Commentary); The Letter to the Hebrews and The Letter to the Ephesians (both in the Pillar Commentary Series) and Colossians and Philemon (Word Biblical Commentary revised edition with Clinton Arnold)
Koorong -Editorial Review.

Ptw: Philippians, Colossians, and Philemon - the Fellowship of the Gospel and the Supremacy of Christ (Preaching The Word Series)
Kent R Hughes
Hardback