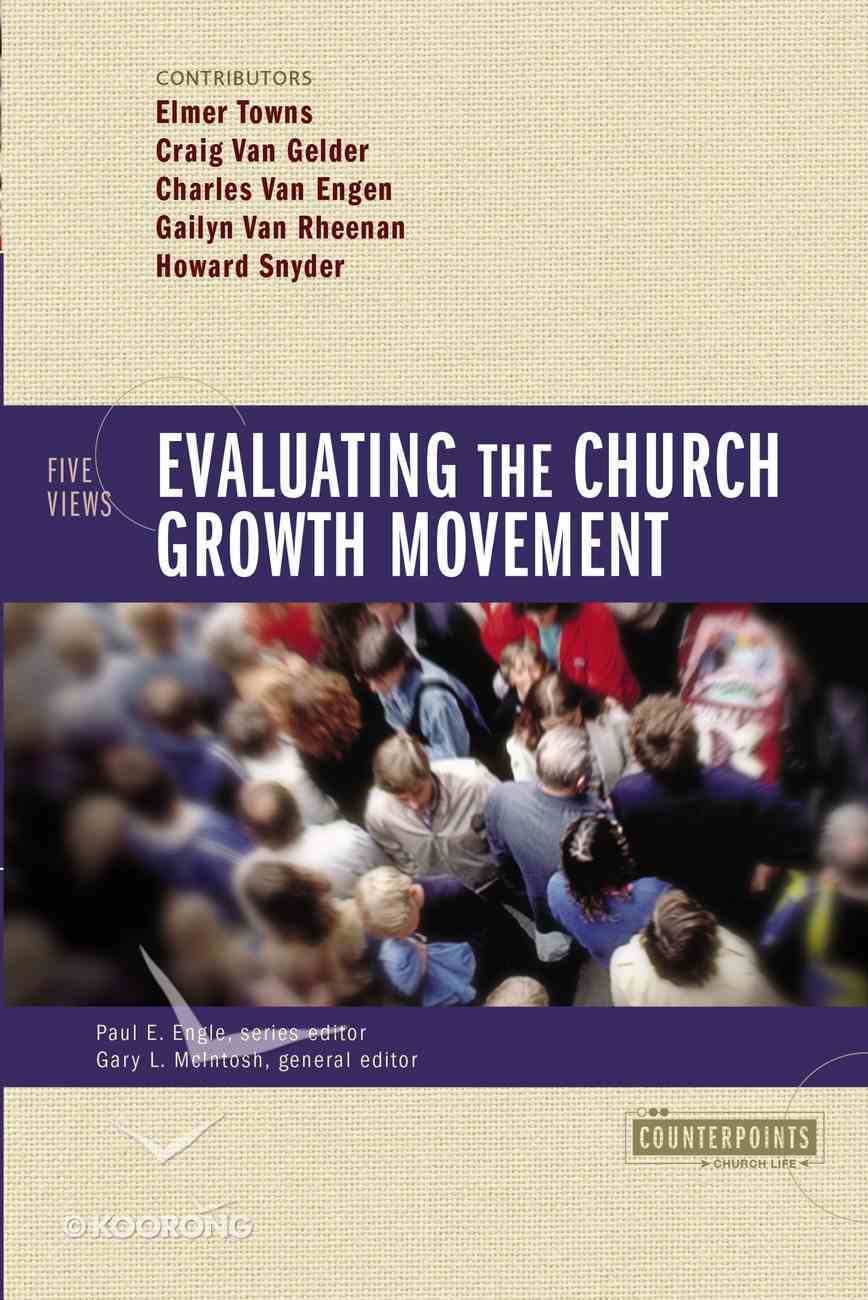 Although the church growth movement has made a significant impact on evangelicals, it has also created controversy and division. This careful five-view analysis helps evangelicals understand the movement's strengths and weaknesses and arrive at their own conclusions on issues that...

Although the church growth movement has made a significant impact on evangelicals, it has also created controversy and division. This careful five-view analysis helps evangelicals understand the movement's strengths and weaknesses and arrive at their own conclusions on issues that affect the future direction of the church. 304 pages, from Zondervan.

Gaining form and momentum over the second half of the 20th century, the Church Growth movement has become an enormous shaping force on the Western church today. You may love it, you may hate it, but you can't deny its impact. But what exactly is Church Growth? In what ways has the movement actually brought growth to the church, and how effective has it been in doing so? What are its strengths and weaknesses? This timely book addresses such questions. After providing a richly informative history and overview, it explores--in a first-ever roundtable of their leading voices--five main perspectives, both pro and con, on the classic Church Growth movement: -Effective Evangelism View (Elmer Towns)-Gospel in Our Culture View (Craig Van Gelder)-Centrist View (Charles Van Engen)-Reformist View (Gailyn Van Rheenan)-Renewal View (Howard Snyder)As in other Counterpoints books, each view is first presented by its proponent, then critiqued by his co-contributors. The book concludes with reflections
-Publisher

The church growth movement (CGM) has stirred debate ever since it was first introduced by Donald McGavran in the 1960s. By the 1980s it attracted enough attention to merit the publication of around 500 church growth books. Many churches experienced significant growth applying these principles. But during the 1990s, critics questioned the movement and its theological underpinnings. Nevertheless, interest in the movement continues in the 21st-century. This Counterpoints: Church Life book presents five viewpoints on the CGM from national church leaders from a diverse denominational, theological, and geographical representation. The five perspectives include: Effective evangelism view: Church growth effectively confronts the culture (Elmer Towns) Gospel in our culture view: Church growth does not effectively engage the culture (Craig Van Gelder) Centrist view: Church growth has been culturally insightful but theologically superficial (Charles Van Engen) Reformist view: Church growth has not developed a balanced intertwining of theological reflection, cultural analysis, historical perspective, and practical strategy (Gailyn Van Rheenan) Renewal view: Church growth must come from the inside out being a community of faith focusing on kingdom issues (Howard Snyder) Not only do the five main contributors respond to each other's positions, but another chapter gives the responses and views of three nationally known pastors for whom church growth is not an academic discipline but a matter of hands-on daily involvement. The book intends to make a valuable contribution to the church by bringing together conflicting views so all perspectives are heard and readers can make their own informed conclusions. The book's introduction by Gary McIntosh shows why this is a movement that can't be ignored. He gives a helpful brief overview of the history of this movement that celebrates its 50th anniversary in 2005.
-Publisher

Evaluating the Church Growth Movement Copyright 2004 by Gary L. McIntoshRequests for information should be addressed to:Zondervan, Grand Rapids, Michigan 49530Library of Congress Cataloging-in-Publication Data Evaluating the church growth movement : five views / contributors, Elmer Towns ... [et al.] ; Gary L. McIntosh, general editor. p. cm. - (Counterpoints) Includes bibliographical references and index. ISBN 0-310-24110-3 1. Church growth. I. Towns, Elmer L. II. McIntosh, Gary, 1947- III. Counterpoints (Grand Rapids, Mich.) BV652.25.E93 2004 254''.5-dc22 2004008616All Scripture quotations, unless otherwise indicated, are taken from the Holy Bible: New International Version. NIV. Copyright 1973, 1978, 1984 by International Bible Society. Used by permission of Zondervan. All rights reserved.Scripture quotations marked NASB are taken from the NEW AMERICAN STANDARD BIBLE. Copyright The Lockman Foundation 1960, 1962, 1963, 1968, 1971, 1972, 1973, 1975, 1977, 1995. Used by permission.Scripture quotations marked NKJV are taken from the New King James Version. Copyright 1979, 1980, 1982 by Thomas Nelson, Inc. Used by permission. All rights reserved.Scripture quotations marked NRSV are taken from the New Revised Standard Version of the Bible, copyright 1989 by the Division of Christian Education of the National Council of the Churches of Christ in the USA. Used by permission.The website addresses recommended throughout this book are offered as a resource to you. These websites are not intended in any way to be or imply an endorsement on the part of Zondervan, nor do we vouch for their content for the life of this book.All rights reserved. No part of this publication may be reproduced, stored in a retrieval system, or transmitted in any form or by any means-electronic, mechanical, photocopy, recording, or any other-except for brief quotations in printed reviews, without the prior permission of the publisher.Printed in the United States of America04 05 06 07 08 09 10 /. DC/10 9 8 7 6 5 4 3 2 1WHY CHURCH GROWTH CAN''T BE IGNOREDGary L. McIntoshWhen you hear the term church growth, what words or phrases come to mind? You may think of megachurches, small groups, numbers, contemporary worship, marketing, or a host of other concepts that have occasionally been promoted as popular church-growth theory.In contrast, you may identify the term church growth with effective evangelism, church planting, church extension, making disciples, church multiplication, or other aspects of outreach that seek to win people to Christ and enlist them as responsible members of his church.These differing perceptions of the term church growth, and the emotions that arise from them, clearly point to misunderstanding and disagreement regarding the term, as well as the movement. Church growth is one of those ideas that cause us to draw lines in the sand. We are either for an emphasis on church growth or against it. There seems to be little neutral ground. Donald McGavran, the father of the modern Church Growth movement, recognized early on the divisive nature of Church Growth thought in a letter to his wife, written from Costa Rica on September 8, 1961: "It is clear that emphasizing the growth of the churches divides the camp. It is really a divisive topic. How strange when all are presumably disciples of the Lord Jesus Christ." Dr. McGavran''s words still ring true today. Church Growth continues to divide the camp, as the five viewpoints expressed in this book will demonstrate.SIGNIFICANT CONTRIBUTIONSThere is agreement, however, among Church Growth critics and adherents alike that the Church Growth movement has made significant contributions to the mission of the church, contributions that cannot be ignored. For instance, one early critic of the movement believes its major contribution is in "clarifying of the mission of the church and focusing mission activity on the responsive." Other critics add that the movement has provided a "strategy and a set of pr
-Publisher