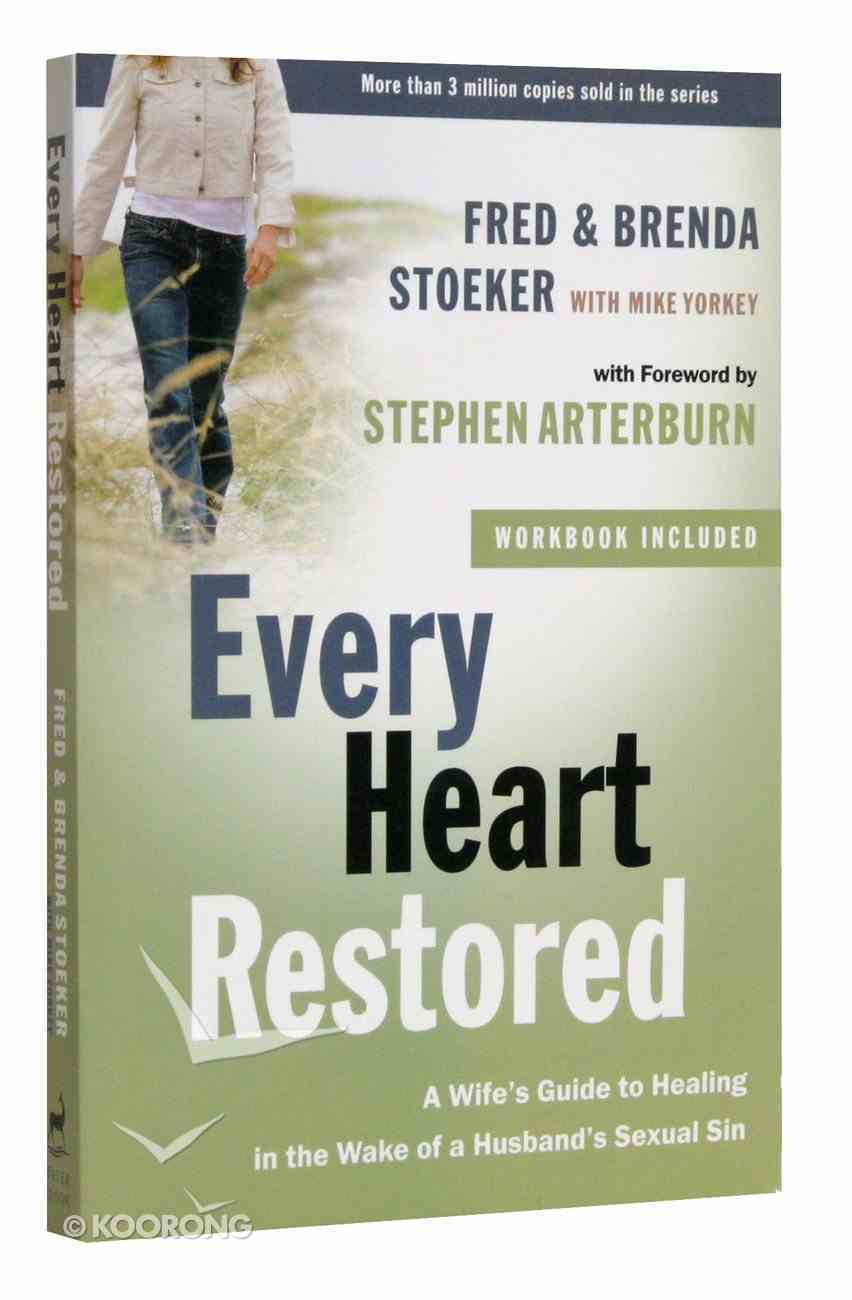 Every Day For Every Man - 365 Readings For Those Engaged in the Battle (Every Man Series)
Stephen Arterburn, Fred Stoeker, Kenny Luck
Genuine Leather

Wholeness and Healing for Women Caught in the Crossfire.

Over the past decade, nearly 400,000 men have found inspiration and hope in Every Man’s Battle, the best-selling men’s guide to victory over sexual sin. Now, here at last is the book for every woman who has become a casualty in the fight for sexual purity. Every Heart Restored offers godly guidance and wisdom for a woman facing such personal betrayal.

“WHAT DOES GOD EXPECT FROM ME?”

“HOW CAN I TRUST AGAIN?”

“IS IT POSSIBLE TO OVERCOME PAIN AND UNFORGIVENESS?”

“CAN MY MARRIAGE BE REBUILT?”

Filled with stories from wives and husbands at every stage in the struggle for sexual purity, Every Heart Restored addresses the questions and real-life issues that matter to you most. Whether you are facing the startling new revelation of your husband’s sin, dealing with a long-term problem, or cleaning out an old wound, Every Heart Restored will meet you where you are and guide you to healing greater than you imagine possible.

I am so glad you found this book. It could change your life and your love forever.

If you are a woman in a relationship with a man who is struggling with sexual sin, this book can help you in ways you never imagined. You will be amazed that there are so many other women who share your experience. These women have been through that same dreadful period of sensing something in a relationship was not right, and at the same time being unable to identify exactly what was wrong or who was at fault. They have felt the same searing anger that arose when you realized you were being betrayed. They have experienced the same feelings of inadequacy and the false belief that, If I had just been more of a woman, he would have remained faithful and pure. They have been blamed for his problems and carried the weight of his shame.

Every Heart Restored will guide you from dark despair to new hope, from resentful bitterness to emotional freedom, from protective detachment to the possibility of a deep connection with your husband. The transition and transformation won’t be instant, nor will they be easy. Restoration is going to take some hard work on your part, at a time when you may feel you have worked hard enough and are ready to give up. But if you follow the path laid out here by Fred and Brenda Stoeker, your heart can be restored—even if your husband is unwilling to make changes. You will be able to live in freedom even if he chooses to remain in bondage to sexual sin.

Not every relationship can be salvaged, and perhaps restoration and freedom seem impossible to you now. But there is hope. God can use this book as a tool to restore your heart.

If you have felt lost and confused through this journey with your husband and his battle with sexual sin, you are not alone. A friend of mine has an extremely bright little boy named Carter. At the age of four, he and his mother were in a discussion about why Jesus came to die on a cross for us. Carter, recalling Christ’s last words, “Father, forgive them, for they do not know what they are doing” (Luke 23:34), very confidently told his mom that Jesus died because, “We don’t know what we are doing down here.” I don’t think it has ever been said better. We don’t know what we are doing down here. And when it comes to sex, that could not be more true.

Part of the problem for men can be traced back to 1953 when Hugh Hefner began saturating the world with his philosophy, which was articulated in his Playboy magazine. Hefner talked about a new view of sex without any boundaries or shame attached. He told us men that if we used the pornography he wanted to sell to us, it would make us more sophisticated, more sexual, and much better lovers. Millions of men bought into that philosophy and made Heffner (and other pornographers like him) rich.

The problem was that Hugh Hefner lied. Then later, with the establishment and accessibility of the Internet, we have seen the true result of pornography: It has not made men more sexually capable and competent; it has made them impotent. Pornography has objectified women and turned the hearts of men away from them. All over the world men have failed to perform sexually unless they are stimulated with pornography. And beautiful women have been destroyed when a man has to pull out a Playboy or turn on a video and look at it while he has sex with his wife.

Not only has pornography caused men to be weak sexual partners, it has disconnected them from those they love. This disconnection is often the first step toward a painful divorce and the end of what God intended to be great. We simply don’t know what we are doing down here.

But now, men are starting to wake up to the Playboy-porn lie and get their acts together, resulting in hope for marriage and hope for discouraged and persevering wives. There is a counter sexual revolution going on, and men are turning away from their sexual sins and back to their wives for all their sexual gratification. Men are aware that their decision to do so does not heal the hurt and resentments that have built up over the years. And that is where this book comes in.

For some time now my team and I have been conducting seminars for men struggling with sexual integrity. (You can find out more about The Every Man’s Battle Workshop at NewLife.com.) The results of those seminars have been amazing Lives have been changed, marriages saved, and hearts restored. Men from all walks of life—pastors, truck drivers, entertainers, single fathers, old and young—have straggled into the sessions, burdened with the guilt and shame of their past misdeeds. They have often come kicking and screaming, not wanting to be there, not wanting to pay for the workshop, and not wanting to change. But even though they have shown up under the worst of circumstances and the weakest of motivations, miraculously we have seen dramatic transformation, repentance, and healing.

The last day of each workshop is filled with open confession and relentless tears as men turn from God-defying pasts to become God’s men.

As these transformed men have returned home to bruised women like you, we have realized the possibility of a relational disaster—the reunion is usually fraught with difficulties even though he has obtained help for his wandering eyes and heart. He has returned intent on giving his wife full attention and wanting a deeper connection. He has now committed to receive all of his sexual gratification from her. But just when he is wanting her the most, his wife often is starting to resent him the most—as the full reality of his problem becomes evident to her. He wants to confess past sins that are not quickly or easily forgiven. So at the height of her anger, he wants to be with her in a new way and experience intimacy that perhaps the couple has never known before. He wants her to trust him, while her stagnant
heart wonders if he can ever be trusted and if she can ever fully love him again. The aftermath of sexual sin is a tough place for both husband and wife.

There is yet another element of despair for many women whose husbands have been involved in sexual sin. After reading Every Man’s Battle or attending the workshop, his transformation begins and is often noticeable to others. People start to admire him for the changes he has made and the new way of living he has so bravely embraced. Ironically, the husband who betrayed his wife becomes a moral hero and is often sought out for counsel. For years she struggled, persevered, and served through his sin. But now, within weeks, all of that appears forgotten as he becomes the man of the hour. Her frustration with this new role can lead to her abandonment of the relationship at a time when it has the greatest opportunity to
thrive.

In no way do you have ultimate responsibility for what he did to you and your marriage. But no one is perfect—especially in difficult circumstances such as those you have been through. The tough reality is that you might have contributed to problems in your marriage (not caused them, but made some contribution to them). For numerous reasons, you might not have been available to him in the ways he thought you should be. You might have withheld sex from him altogether. While that did not help the situation, it did not force him to be unfaithful. That was his choice. Now, both of you have choices, and Every Heart Restored will help you make the best ones with the greatest likelihood for success.

I close this foreword with the words of Jesus. In John 5 we find the story of Jesus at the pool of Bethesda with a man who had been seeking healing there for thirty-eight years. Jesus asked the man a simple question that all of us must answer as well: “Do you want to get well?” (verse 6). Healing is a choice, a choice we hope you make as you read this wonderful book.