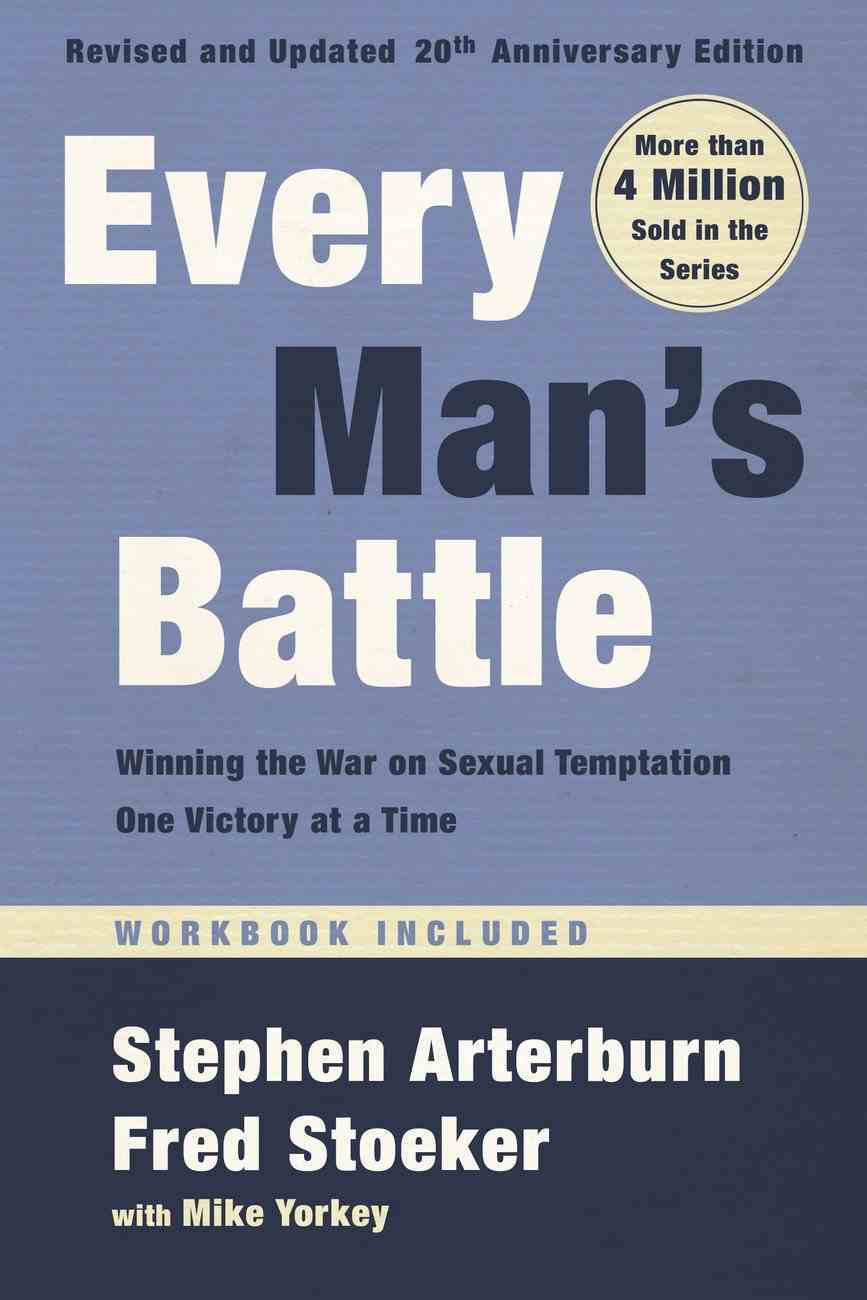 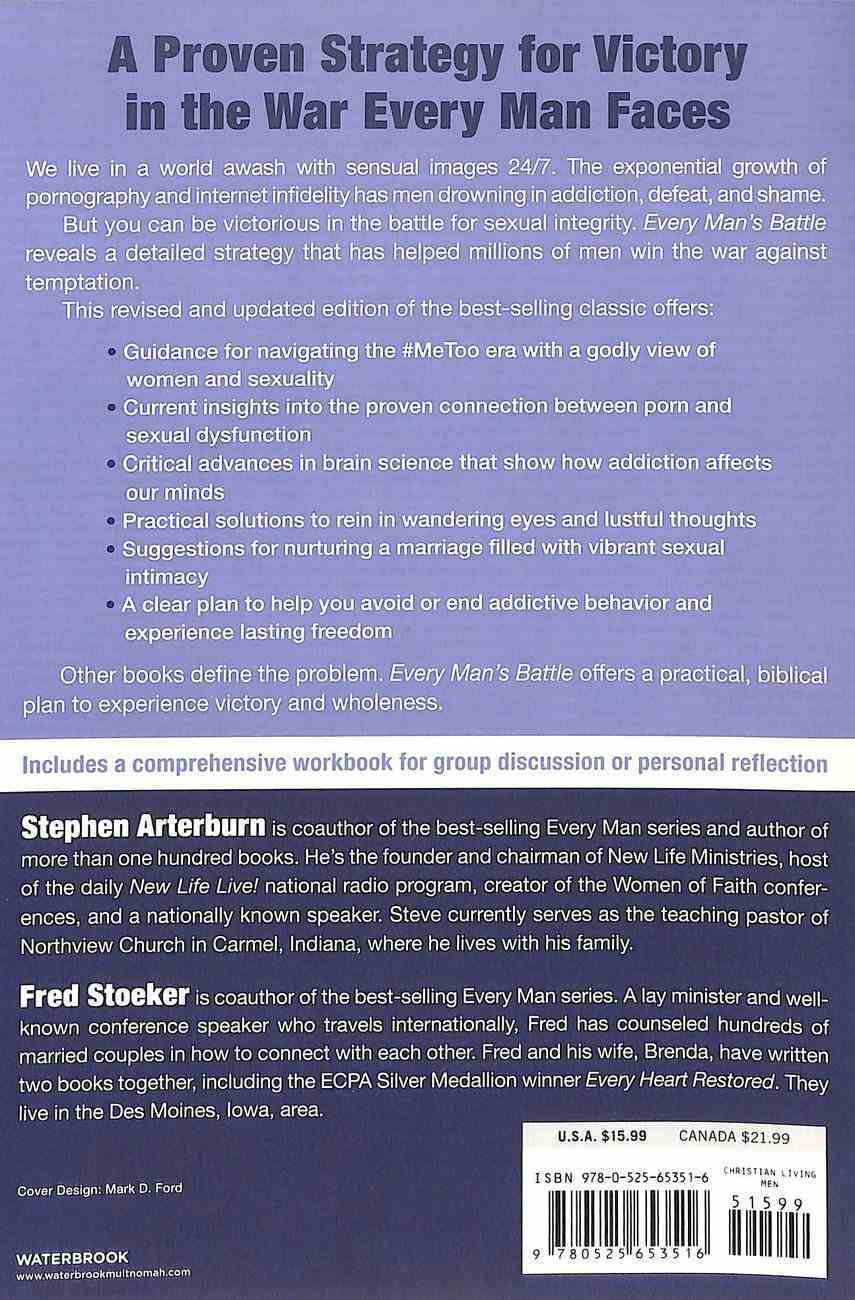 Every Man's Battle : Winning the War on Sexual Temptation One Victory At a Time (20Th Anniversary Edition) (Every Man Series)

:The groundbreaking guide to winning the battle with sexual temptation--now revised and updated to help men navigate the realities of technology and other contemporary challenges. From movies and television to print media and the Internet, men are continually...

:The groundbreaking guide to winning the battle with sexual temptation--now revised and updated to help men navigate the realities of technology and other contemporary challenges.

From movies and television to print media and the Internet, men are continually bombarded with sensual images and content. It is impossible to avoid temptation, but this book offers a clear and tested strategy for victory.

Millions have found Every Man's Battle an invaluable guide to overcoming the struggle and remaining strong in the face of temptation. With extensive updates, including the latest data on the intersection between brain science and sexuality, this bestseller shares the stories of dozens who have escaped the trap of sexual immorality and presents a practical, detailed plan for living with sexual integrity and a godly view of women.

A comprehensive workbook makes this an ideal resource for small groups as well as personal use.
-Publisher


&ldquo;Among you there must not be even a hint of sexual immorality, or of any kind of impurity&rdquo; (Ephesians 5:3). If there&rsquo;s a single Bible verse that captures God&rsquo;s standard for sexual purity, this is it.


And it compels this question: In relation to God&rsquo;s standard, is there even a hint of sexual impurity in my life?


For both of us the answer to that question was yes.


On a sun-splashed Southern California morning years ago, I hopped into my Mercedes 450SL, white with a black top. The classic coupe was over ten years old but was still the car of my dreams. I&rsquo;d owned it for just two months, and on that spectacular morning, with the top down and the wind blowing in my face, I was feeling especially good about life and my future.


I was tooling northbound through Malibu on my way to Oxnard on the PCH, as locals called the Pacific Coast Highway. I&rsquo;d always loved driving on these four lanes of blacktop that hugged the golden coastline and provided a close-up view of LA&rsquo;s beach culture.


I never intentionally set out to be girl watching that day, but I spotted her about two hundred yards ahead and to the left. She was jogging toward me along the coastal sidewalk. From my sheepskin-covered leather seat, I found the view outstanding, even by California&rsquo;s high standards.


My eyes locked on to this goddess-like blonde, rivulets of sweat cascading down her tanned body as she ran at a purposeful pace. Her jogging outfit, if it could be called that in those days before sports bras and spandex, was actually a skimpy bikini. As she approached on my left, two tiny triangles of tie-dyed fabric struggled to contain her ample bosom.


I can&rsquo;t tell you what her face looked like; nothing above the neckline registered with me that morning. My eyes feasted on this banquet of glistening flesh as she passed on my left, and they continued to follow her lithe figure as she continued jogging southbound. Simply by lustful instinct, as if mesmerized by her gait, I turned my head further and further, craning my neck to capture every possible moment for my mental video camera.


I might still be marveling at this remarkable specimen of female athleticism if my Mercedes hadn&rsquo;t plowed into a Chevy Chevelle that had come to a complete stop in my lane. Fortunately, I was traveling only fifteen miles per hour in the stop-and-go traffic, but the mini-collision crumpled my front bumper and crinkled the hood. And the fellow I smacked into didn&rsquo;t appreciate the considerable damage to his Chevy&rsquo;s rear end.


I got out of the car&mdash;embarrassed, humiliated, saturated with guilt, and unable to offer a satisfying explanation. No way would I tell this guy, &ldquo;Well, if you&rsquo;d seen what I saw, you&rsquo;d understand.&rdquo;


Sadly, I was the one who didn&rsquo;t fully understand what I had done or what was going on inside me. I continued in that darkness for quite some time before realizing I needed to make dramatic changes in the way I looked at women and the way I was relating to God.


From Fred: Wall of Separation


It happened every Sunday morning during our church worship service. I&rsquo;d look around and see other men with their eyes closed, freely and intensely worshipping the God of the universe. Myself? I sensed only a wall of separation between the Lord and me.


Somehow, I wasn&rsquo;t right with God. As a new Christian, I imagined I just didn&rsquo;t know God well enough yet and that I&rsquo;d grow into that connection. But as time passed, nothing changed. When I mentioned to my wife, Brenda, that I felt vaguely unworthy of Him, she wasn&rsquo;t the least bit surprised.


&ldquo;You could be right,&rdquo; I allowed.


I hoped it was that simple. I mulled it over as I recalled my days of youth.


My father, handsome and tough, had been a national wrestling champion in college and a bulldog in business. Aching to be like him, I&rsquo;d joined my middle school wrestling team. But the best wrestlers are natural-born killers, and I soon found that I didn&rsquo;t have a wrestler&rsquo;s heart.


At the time, my dad was coaching wrestling on an interim basis at a small high school in Alburnett, Iowa. Though I was still in middle school, he wanted me to wrestle with the older guys, so he brought me along to the high school workouts.


One afternoon we were practicing escapes, and my partner was in the down position. While grappling on the mat, he suddenly needed to blow his nose. He straightened up, pulled his T-shirt to his nose, and violently emptied the contents onto the front of his shirt. We quickly returned to wrestling. As the up man, I was supposed to keep a tight grip on him. Reaching around his belly, my hand slid into his slimy T-shirt. Sickened, I let him go.


Dad, seeing him escape so easily, dressed me down. &ldquo;What kind of man are you?&rdquo; he roared, and then he screamed on and on at me for what seemed like forever. Staring hard at the mat during this onslaught, I realized that if I had a wrestler&rsquo;s heart, I would have cranked down tightly and ridden out my opponent in spite of the snot on my hands, maybe grinding his face into the mat in retaliation. But I hadn&rsquo;t, and after two more hollow, joyless years on the mat, I finally hung up my singlet for good.


I still wanted to prove myself to Dad, of course, so I tried other sports, excelling at football and baseball. But my father never forgave me for quitting wrestling, and I couldn&rsquo;t quite prove myself to him as a man no matter how well I played on the gridiron or baseball diamond. And he never let me forget it.


He was verbally relentless. After I struck out in one baseball game, I hung my head on the way back to the dugout. &ldquo;Get your head up!&rdquo; he hollered for all to hear. I was mortified. On the car ride home, he ripped me so hard that I threw up into my ball cap. One time after he&rsquo;d dropped me off at home and returned to his own place across town (he was divorced from my mom at the time), he wrote me a long letter detailing every mistake I&rsquo;d made that day and dropped it in the mail that night.


And you know what? I never did measure up as a man, at least not in his mind. Years later, after I&rsquo;d married Brenda, my father felt she had too much say in our marriage. &ldquo;Real men take charge of their households,&rdquo; he said.


So now, as Brenda and I discussed my relationship with my dad, she suggested I might need counseling. &ldquo;It surely couldn&rsquo;t hurt,&rdquo; she said.


So I read some books and counseled with my pastor, and my feelings toward Dad improved. Still, I continued to feel that distance from God during the Sunday morning worship services, which revealed that Brenda&rsquo;s hunch was incorrect. My poor relationship with my dad wasn&rsquo;t the main culprit after all.


The true reason for that distance slowly dawned on me over time: there was a hint of sexual immorality in my life. In fact, there was a monster lurking about, and it surfaced each Sunday morning when I settled into my comfy La-Z Boy and opened the newspaper. I would quickly find the department-store inserts and begin paging through the colored newsprint filled with models posing in bras and panties. Always smiling. Always available. I loved lingering over each ad insert. I rationalized to myself, It&rsquo;s wrong, but it&rsquo;s such a small thing! Besides, it&rsquo;s a far cry from Playboy, right? And haven&rsquo;t I already given that up?


As I examined myself more closely, I found I had more than a hint of sexual immorality. Even my sense of humor reflected it. Sometimes a person&rsquo;s innocent phrase&mdash;even from our pastor&mdash;struck me with a double sexual meaning. I would chuckle, but I felt uneasy.


Why do these double entendres come to my mind so easily? Should a Christian mind create them so nimbly? I remembered that the Bible said that such things shouldn&rsquo;t even be mentioned among the saints. I&rsquo;m worse, I thought. I even laugh at them!


And my eyes? They were ravenous heat seekers searching the horizon, locking on any target with sensual heat: young mothers in shorts leaning over to pull children out of car seats, church soloists with silky shirts, college girls in low-cut summer dresses.


My mind, too, ran wherever it willed. This had begun in my childhood, when I found Playboy magazines under Dad&rsquo;s bed. He also subscribed to Sex to Sexty, a publication filled with jokes and comic strips with sexual themes. When Dad divorced Mom and moved to his bachelor&rsquo;s pad, he hung a giant velvet nude in his living room, overlooking us as we played cards on my Sunday afternoon visits.