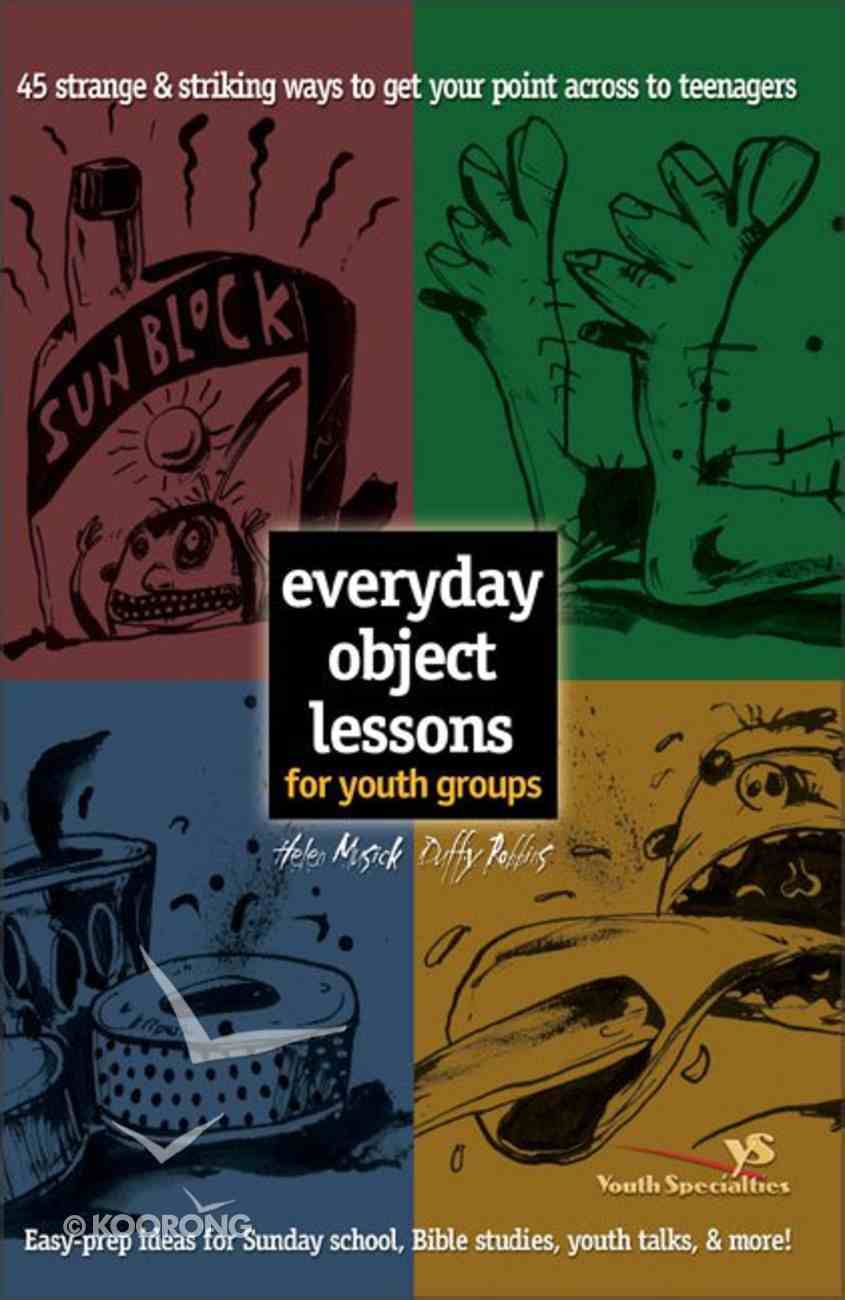 You may not like it that students forgot your talk on temptation, but remembered your mouse-trap object lesson . . . . . . but the fact remains that nothing brings a lesson to life more vividly and concretely--or wakes...

Would You Rather...? (Quick Questions Series)
Doug Fields
Paperback

You may not like it that students forgot your talk on temptation, but remembered your mouse-trap object lesson . . . . . . but the fact remains that nothing brings a lesson to life more vividly and concretely--or wakes up a drowsy Sunday school class faster--than a good object lesson. In Everyday Object Lessons for Youth Groups the authors (who are youth workers and teachers of youth workers) pool their most effective 45 object lessons into a collection that's perfect for both junior and senior high youth groups.Here are no-prep and low-prep object lessons for devotionals, Sunday school lessons, talks at camps and retreats--even for sermons. Inside you'll find object lessons about--Beauty (using a kiwi fruit)Regret (a mirror)Divine protection (sun block)Anger (Alka-Seltzer and 7-Up)The power of words (Popsicle sticks)Priorities (manure)Confession (hydrogen peroxide)Temptation (a mousetrap)The person of Jesus (keys)Conformity (Play-Doh)Endurance (bricks)--and 34 more quirky and attenti
-Publisher

You may not like it that students forgot your talk on temptation, but remembered your mouse trap object lesson . . . but the fact remains that nothing brings a lesson to life more vividly and concretely -- or wakes up a drowsy Sunday school class faster--than a good object lesson. In Everyday Object Lessons for Youth Groups the authors (who are youth workers and teachers of youth workers) pool their most effective 45 object lessons into a collection that's perfect for both junior and senior high youth groups. Here are no-prep and low-prep lessons for devotionals, Sunday school lessons, talks at camps and retreats -- even for sermons. Inside you'll find objector lessons about -- beauty (using a kiwi fruit), regret (a mirror), divine protection (sun block), anger (Alka-Seltzer and 7-Up), the power of words (Popsicle sticks), priorities (manure), confession (hydrogen peroxide), temptation (a mousetrap), the person of Jesus (keys), conformity (Play-Doh), and endurance (bricks) -- and 34 more quirky and attention grabbing object lessons. Use them to open your lessons. . .to dramatize your talks. . .to close your Bible studies with a demonstration. However you use them, you have Bible references and provocative discussion-starting questions with each object lesson to help you take it in any direction you want. And with both a topical and scriptural index, you can find the perfect object lesson fast.
-Publisher

Duffy Robbins is Professor of youth ministry at Eastern University in St. Davids, Pennsylvania. A thirty-five year veteran of youth ministry, he's the bestselling author and coauthor of Enjoy the Silence, Speaking to Teenagers, Youth Ministry Nuts and Bolts and many more. Duffy speaks around the world to teenagers and people who care about teenagers.

Helen Musick taught Youth Ministry at Asbury Seminary and was a member of Youth Specialties Core team for years. She now serves as Transformation Pastor at Quest Community Church in Lexington, Kentucky.

All about object lessons and how to use them Helen: Two years ago my understanding of teaching adolescents changed dramatically when--- Duffy: Me too! Well, it was more than two years ago. The fact that teenagers learn differently than I thought hit me for the first time on a Sunday morning several years ago. Helen: Okay, so upstage me... Duffy: I had just finished preaching what I felt was a fairly effective sermon, and people were streaming out of the church. I was in my thanks-for-coming handshake mode, responding to comments as people walked down the front steps of the church. 'I appreciate the encouragement.' 'I'm glad you found it helpful.' 'No, ma'am, I'm fine, I just haven't been getting much sleep lately.' 'Good to see you too.' 'Yes, honey, that's my real hair. Shouldn't you be in the nursery?' Then, came an epiphany. I got exactly three comments on my sermon---and two of them weren't even about the sermon. They were about the children's talk I had given earlier in the service. Now I understand that every sermon isn't going to be a direct hit, but I know good stuff when I hear it, and I thought this was pretty good stuff! A Swindoll outline, two Campolo illustrations, a little John Stott, a bit of Eugene Peterson, and a pinch of Max Lucado. Vintage Duffy Robbins, right? But I heard no end of conversational references to 'Gary the Glove,' the object lesson I had used in the children's talk---a simple illustration using a glove and my hand. Middle-aged men in suits were saying, 'Hey, that little talk about Gary the Glove really helped.' Gary the Glove? That one-minute object lesson? Helen: My turn. Over the past 16 years I had worked in the local church pastoring and discipling youths. The students I worked with mostly came from middle and upper-middle class homes. The churches I served were like any traditional church found in the Bible Belt. All that changed when I accepted a new youth ministry position. Most of my new students came from backgrounds of abuse, neglect, and brokenness. I remember driving to meet my new youth group for the first time. I had to drive through a security gate and past security guards to a building surrounded by barbed wire fences. My new youth group, 15 girls between the ages of 13 and 17, consisted of young women who, because of crimes they had committed, were now serving time in a full-security rehabilitation facility. With these young women I learned the value of using object lessons as an effective means of teaching adolescence. I realized quickly that their attention spans were short and their interest levels were low. One week I brought in a sack of shoes: old shoes, new shoes, my daughter's princess dress-up shoes. There were running shoes, infant shoes, fuzzy slippers, and high-heeled pumps. I dumped the shoes out in the middle of the floor. 'Tell me, ladies. If you were to choose one pair of shoes to describe how you feel about life, which pair would it be?' An amazing thing happened. The girls started choosing shoes, and with the most enthusiasm I'd seen yet, they started sharing why they chose the shoes they did. After the sharing came to an end, I talked to the girls about how Jesus has walked where we've all walked. He's been afflicted, challenged, hurt in the same ways we have. They made the connection, and I saw sparks of insight and interest I had not seen before. The shoes had been a tool to teach these students about God's care and love for them. Girls who chose not to attend Bible study that night watched from a distance with a level of curiosity that eventually led them into the circle. The next week I brought a bag of jelly beans. And so it went. Many of these object lesson came from a special season of ministry for me---a season I'll always be grateful for. You don't have to work with troubled youths for object lessons to be effective. And object lessons aren't just for children. Since we started working with teenagers, we've incorporated visual objects in sermons for teens and adults alike. The response is always the same: their interest is held and learning occurs. What more could you ask for? Concrete, visible, vivid, and memorable---it's hard to beat a good object lesson when you're trying to help people understand a biblical truth. To borrow from Paul's words in Colossians 1, object lessons are a kind of visible expression of the invisible, made even more effective by applying the following reminders. * The power of an object lesson is in its simplicity. Resist the temptation to explain all the deep symbolism you've been able to uncover. One of the quickest ways to ruin an object lesson is try to make it more than it is. Make just one truth visible to your students---that's enough. Don't press the analogy so hard that you end up squashing it flat. Mickey Mouse is not a Christ figure, Barney is not an archetype of socioeconomic oppression, and---even if there are three different fibers in the fabric---Gary the Glove is not about the Trinity. So keep it simple, prepare the best lesson you can, and remember that it's the Holy Spirit, not your object lesson, that instructs and changes students.

Abraham, Jacob, Messiah, 'I Am', Ruth (On The Way Series)
Tnt Ministries
Paperback

The 13 Most Important Bible Lessons For Teenagers
Group Publishing
Paperback