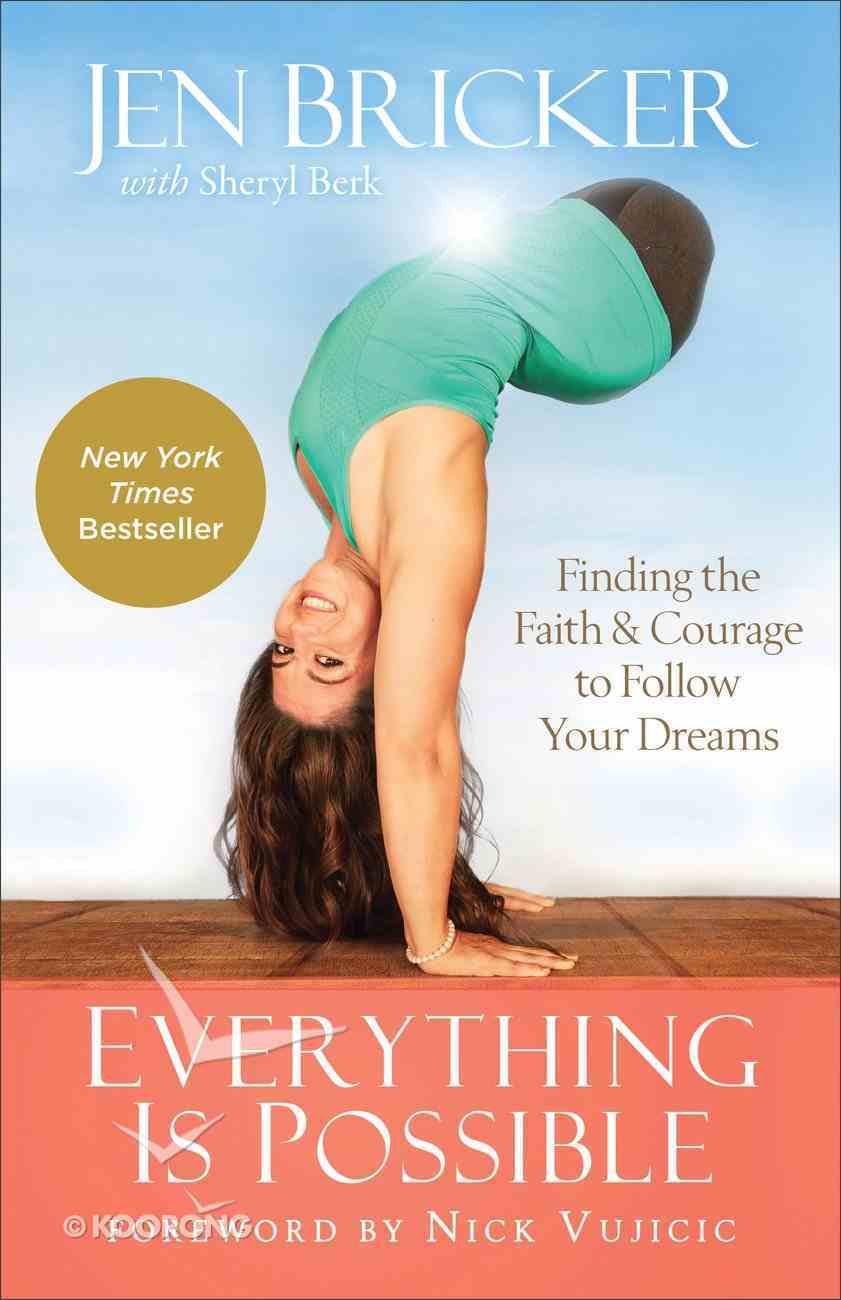 Everything is Possible: Finding the Faith and Courage to Follow Your Dreams

:Born without Legs, She Inspires Others to Overcome Jen Bricker was born without legs. Shocked and uncertain they could care for her, her biological parents gave her up for adoption. In her loving adoptive home, there was just one...

Out of Print. Limited Availability
Expected to ship within 8 hours from Australia.
Learn More
Free Shipping
for orders over $99.

The Rescuer: One Firefighter's Story of Courage, Darkness, and the Relentless Love That Saved Him
Jason Sautel, D R Jacobsen
Paperback

Hiding in the Light: Why I Risked Everything to Leave Islam and Follow Jesus
Rifqa Bary
eBook

Hiding in the Light: Why I Risked Everything to Leave Islam and Follow Jesus
Rifqa Bary
Paperback

Nerves of Steel: How I Followed My Dreams, Earned My Wings, and Faced My Greatest Challenge
Tammie Jo Shults
Paperback

The Return: Reflections on Loving God Back
Lacey Sturm
Paperback

:Born without Legs, She Inspires Others to Overcome

Jen Bricker was born without legs. Shocked and uncertain they could care for her, her biological parents gave her up for adoption. In her loving adoptive home, there was just one simple rule: "Never say 'can't.'" And pretty soon, there was nothing this small but mighty powerhouse set her sights on that she couldn't conquer: roller-skating, volleyball, power tumbling, and spinning from silk ribbons thirty feet in the air.

Everything Is Possible is her incredible story--a story of God working out his plan for her life from before day one. Readers follow Jen from the challenges of growing up different to holding captive audiences numbering in the tens of thousands. Everything Is Possible shows readers what they can accomplish when they remove the words coincidence and limitation from their vocabulary. Filled with heart and spirit, as well as Jen's wit, wisdom, and no-holds-barred honesty, this inspiring true story points the way to purpose and joy. Foreword by Nick Vujicic.

New York Times bestselling co-author of Soul Surfer, SHERYL BERK is the founding editor in chief of Life & Style Weekly as well as a contributor to InStyle, Martha Stewart, and other publications. <BR><BR>Her daughter, CARRIE, a cupcake connoisseur, cooked up the idea for the Cupcake Club series in second grade. Together, they have invented dozens of crazy cupcake recipes in their NYC kitchen (can you say Purple Velvet?) and have the frosting stains on the ceiling to prove it. Carrie maintains her own cupcake blog, featuring reviews, photos and recipes of her culinary adventures.

Jen Bricker is an aerial artist, acrobat, and motivational speaker. A state champion in power tumbling, she has traveled internationally with Britney Spears's World Tour and appeared as the headliner at the prestigious Palazzo hotel in Las Vegas, New York's Lincoln Center, and the Shangri-La Hotel in Dubai. She has been featured on numerous news shows, including HBO's "Real Sports", ABC's "20/20", and "Good Morning America". She is currently living in Los Angeles and has added a successful speaking career to her list of accomplishments, including a feature in TED talks.

Behind the Lights: The Extraordinary Adventure of a Mum and Her Family
Helen Smallbone, James Rebecca St (Fwd)
Hardback