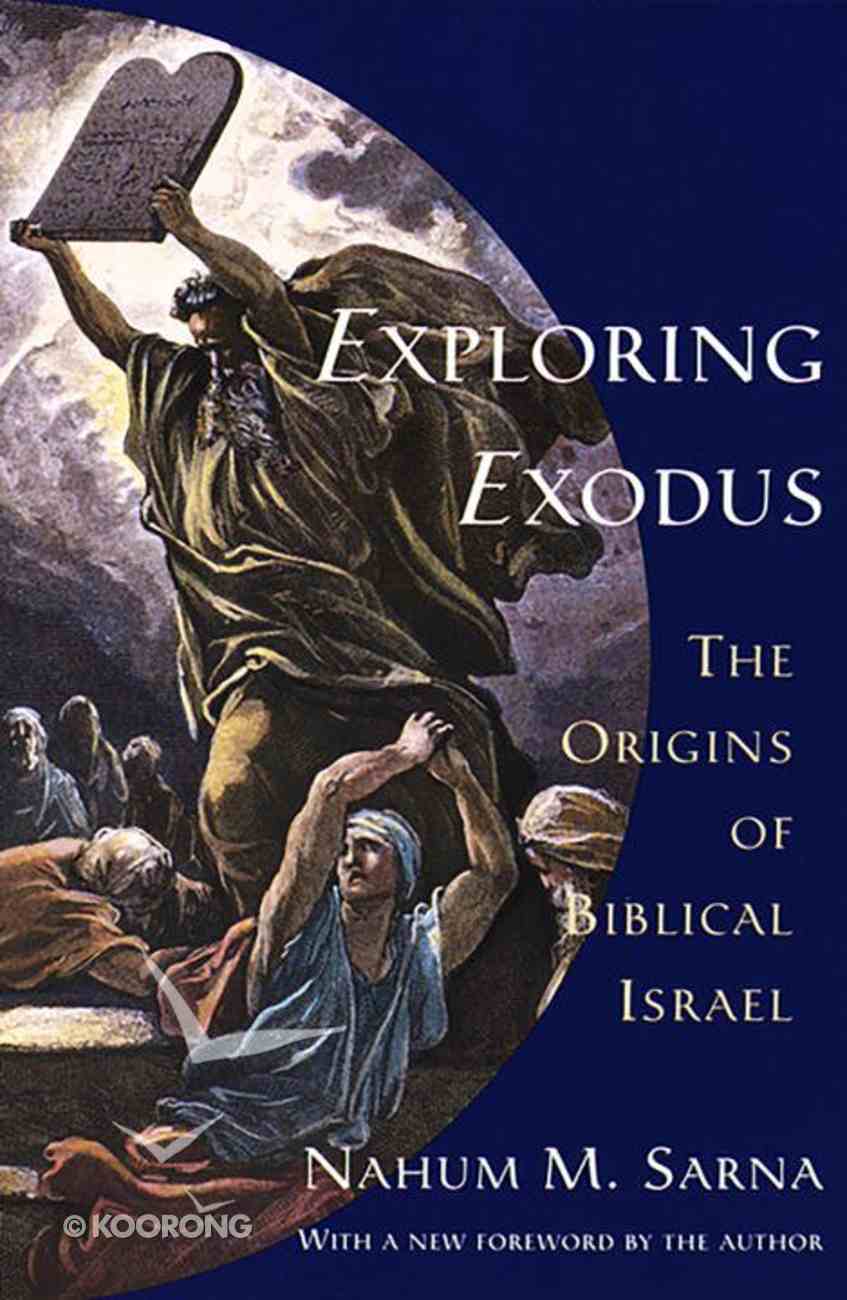 Sarna examines the distinctiveness of the Exodus narrative in light of ancient Near Eastern history and contemporaneous cultures--Egyptian, Assyrian, Canaanite, and Babylonian. In a new Foreword to the 1996 edition, Sarna takes up the debate over whether the exodus from...

Sarna examines the distinctiveness of the Exodus narrative in light of ancient Near Eastern history and contemporaneous cultures--Egyptian, Assyrian, Canaanite, and Babylonian. In a new Foreword to the 1996 edition, Sarna takes up the debate over whether the exodus from Egypt really happened, clarifying the arguments on both sides and drawing us back to the uniqueness and enduring significance of biblical text.
-Publisher

William G. Dever is Professor of Near Eastern Archaeology and Anthropology at the University of Arizona.

:CHAPTER I
&#160;
THE OPPRESSION
&#160;
Exodus I
&#160;
The newly founded community of Israelites in Egypt prospered at first, and their numbers grew enormously in the course of the years. The divine promises to the patriarchs that their posterity would be numerous were amply fulfilled. The Israelites had become a &ldquo;great nation.&rdquo; As the text has it, they &ldquo;were fertile and prolific, they multiplied and increased very greatly, so that the land was filled with them.&rdquo; The term &ldquo;land&rdquo; here most likely refers to the area of their settlement, the region of the eastern part of the Nile Delta, not to Egypt as a whole. This population explosion was perceived as a threat and a danger to the security of Egypt, and when a &ldquo;new king,&rdquo; most probably the founder of a new dynasty, took over the reins of power, the situation came to a head.
&#160;
&#160;
The Hyksos and their expulsion
&#160;
If the conclusion reached in the preceding chapter about the date of the Exodus be correct, the development of events becomes intelligible, and the historical background can be plausibly reconstructed. For this we have to go back a few centuries to what is called by historians of Egypt the &ldquo;Second Intermediate Period,&rdquo; which lasted from the eighteenth to the sixteenth centuries B.C.E.&#160;This is the era of the Hyksos, the Asiatics who seized power and ruled Egypt for about a century and a half. The name itself means &ldquo;Rulers of Foreign Lands,&rdquo; and strictly applied only to the chiefs themselves, but it has long been given a more general application.
&#160;
The Hyksos were not organized invaders. They were rather a conglomeration of ethnic groups, among whom Semites predominated, who infiltrated into the land over a long period of time in ever-increasing numbers, probably coming from Canaan. By ca. 1720 B.C.E. they were fully in control of the eastern Delta of the Nile and had established their capital at Avaris. From this base they expanded southward into Lower Egypt. By ca. 1674 B.C.E.&#160;a Hyksos king with the Semitic name Salitis had occupied Memphis, the ancient capital of Egypt. The Hyksos constituted the XVth and XVIth Dynasties, adopting the style and bureaucratic institutions of the traditional pharaohs. Gradually, Semites replaced Egyptians in high administrative office. The rise of Joseph to power and the migration of the Hebrews fits in well with what is known of the era of Hyksos rule. The Second Intermediate Period in Egyptian history is marked by a strong Semitic presence.
&#160;
The Hyksos never seemed to have dominated Upper Egypt, where a native family retained control of that part of the country. It comprised the XVIIth Dynasty and operated out of Thebes, situated some three hundred thirty miles (four hundred thirty kilometers) upstream from modern Cairo. This became the focus of opposition to the Hyksos. One of the last kings of this dynasty, Seqenen-re II, began to organize the resistance. From the state of his mummy, which showed that he died at about the age of forty from a series of horrible head wounds, and from the fact that he received the title &ldquo;The Brave,&rdquo; it has been assumed that he fell in battle with the Hyksos. The struggle was continued by his son. Kamose, who succeeded in driving the Hyksos out of Upper Egypt and in recovering Memphis. The final and victorious stage in the liberation of Egypt was accomplished by Amose, brother of Kamose. He inflicted a crushing defeat on the Hyksos by capturing their capital of Avaris and driving them back into Canaan. Amose (ca. 1552-1527 B.C.E.) founded the XVIIIth Dynasty of pharaohs, and inaugurated the New Kingdom, the period of the Egyptian Empire, in the course of which the country reached the height of its power and magnificence.
&#160;
The Hyksos occupation was a shameful humiliation for the Egyptians that had a profound effect upon the national psychology. About one hundred years after the liquidation of Hyksos rule, Queen Hatshepsut (ca. 1480-1469 B.C.E.) had carved about the entrance to the rock-cut temple she built at Speos Artimedos, (Istabl Antar) in Middle Egypt, an inscription in which she recalled the ruination of the country caused by these Asiatics.
&#160;
As late as ca. 300 B.C.E., Manetho, an Egyptian priest who wrote a history of his country in Greek, reports, according to the fragment cited by the Jewish historian Josephus (ca. 38-100 C.E.), that the Hyksos &ldquo;savagely burnt the cities, razed the temples of the gods to the ground, and treated the whole native population with the utmost cruelty, massacring some and carrying off the wives and children into slavery.&rdquo;
&#160;
Whether or not these sources truly reflect historic reality is uncertain, but they give expression to the sharp and lasting impact that the episode had on the popular mind. Henceforth, Egypt was acutely conscious of the perils lurking in the outside world. The danger of foreign invasion, especially from Asia via the eastern Delta, haunted her thereafter and could never again be smugly ignored or underestimated. The fact is that the Semitic population was not driven out of that region with the expulsion of the Hyksos rulers, and it continued to reside there during the XVIIIth and XIXth Dynasties.