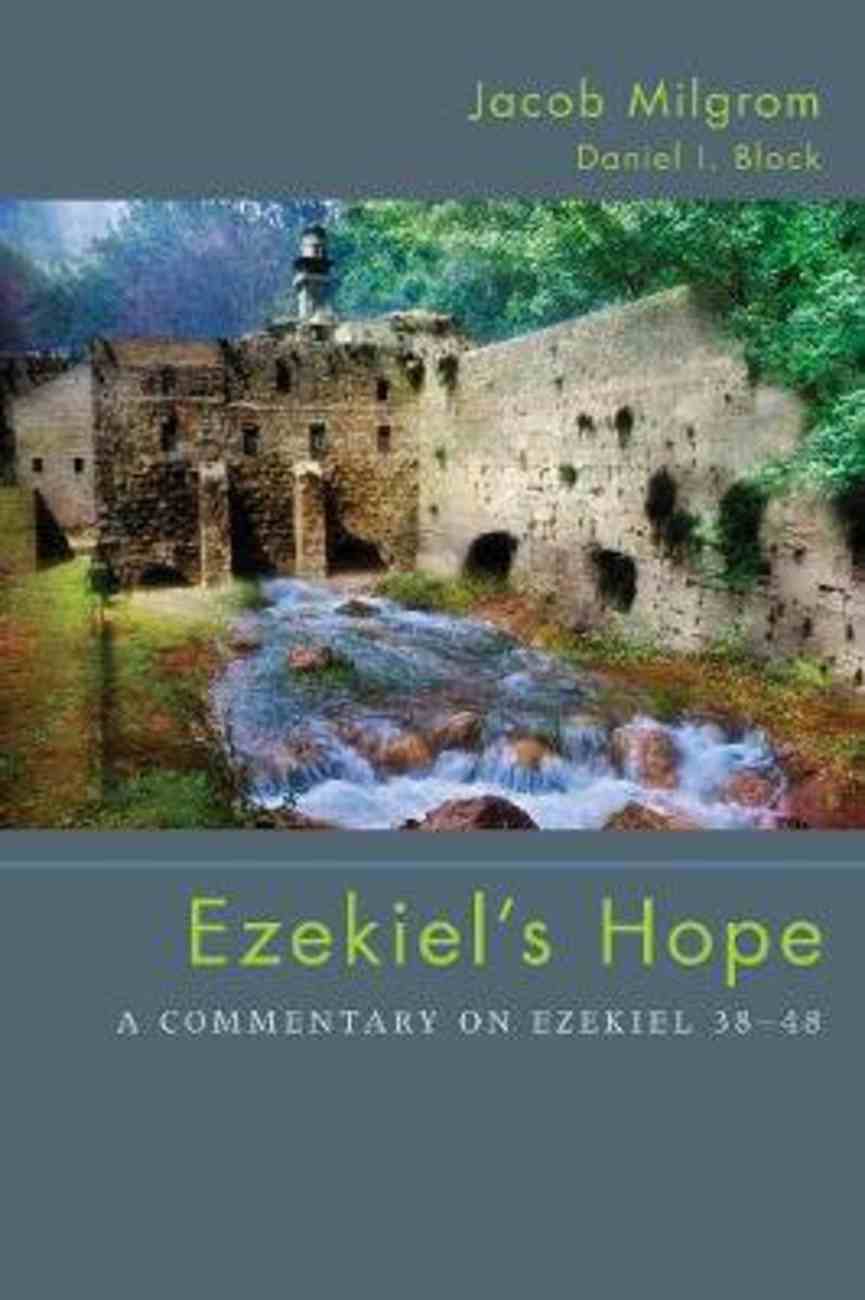 Ezekiel's Hope: A Commentary on Ezekiel 38-48

Jacob Milgrom was a man of deep faith and deep learning. As teacher and scholar he is best known for his work on ancient Israel's religion, especially its cultic expression in tabernacle and temple. His command of this subject is...

Jacob Milgrom was a man of deep faith and deep learning. As teacher and scholar he is best known for his work on ancient Israel's religion, especially its cultic expression in tabernacle and temple. His command of this subject is evident in his massive, three-volume commentary on Leviticus (Anchor Bible Commentary) and his commentary on Numbers (JPS Torah Commentary). This provides perfect background for one who seeks to instruct us on the final chapters of Ezekiel. In this volume Milgrom guides us engagingly through Ezekiel's oracle against Gog (chs. 38-39) and his final vision of Israel's physical and spiritual restoration (chs. 40-48). Regrettably Professor Milgrom did not live to see his work on Ezekiel appear in print. Given his influence on biblical scholarship far beyond his native Jewish world, it is fitting that this final form of this project be cast as an interfaith dialogue with Daniel Block, who has himself written a major two-volume commentary on Ezekiel (NICOT). This volume offers a window into how one Jewish scholar engaged with the work of a Christian scholar.It invites readers to listen in on their conversation, in the course of which they will also hear the voices of medieval Jewish rabbis, particularly R. Eliezer of Beaugency and R. Joseph Kara. While Block and Milgrom are free to disagree in their reading of particular texts, readers will find this dialogue illuminating for their own understanding of the last chapters of Ezekiel. "According to rabbinic tradition, rabbi Hananiah ben Hezekiah burned three hundred barrels of oil in his lamp before being able to harmonize the laws of Moses with those given in Ezekiel. In a similar way, Jacob Milgrom's lifetime of scholarly study of the Pentateuch ideally equipped him to write a commentary on Ezekiel 38-48. This volume will be an indispensable reference point for all future work on the prophet." --Iain Duguid, Professor of Old Testament, Grove City College "The late Jacob Milgrom was the leading expert on biblical cult and ritual in his generation. His commentaries on Leviticus, for which he is best known, reflect the meticulous, holistic approach to biblical texts that became the hallmark of his life's work.In this, his last major publication, Milgrom brings this approach to bear on the final chapters of Ezekiel. Never shy of new ideas, his bold proposals will challenge Ezekiel scholarship for years to come." --William A. Tooman, University of St. Andrews "Seldom has such a spirited written discussion taken place between a Jewish and an evangelical scholar as is found in this study. Even more fascinating is the direct way in which the most difficult portion of the prophecy of Ezekiel (chapters 38-48) is engaged--with respect for each other and with a commitment to the text. It is a joy to recommend this book both for the stimulating way it handles Scripture and for the promise it holds for additional joint ventures between the two scholarly traditions." --Walter C. Kaiser Jr., Gordon-Conwell Theological Seminary Jacob Milgrom (1923-2010), an esteemed rabbi in Conservative Judaism, was Professor Emeritus of Near Eastern Studies at University of California, Berkeley. He was the author of many books, most notably The JPS Torah Commentary: Numbers (1966) and the three-volume Anchor Bible Commentary of Leviticus (1991-2001).
-Publisher

Daniel I. Block (D.Phil., School of Archaeology and Oriental Studies, University of Liverpool, Liverpool, England) has been Gunther H. Knoedler Professor of Old Testament at Wheaton College since 2005. His most recent publications are For the Glory of God: A Biblical Theology of Worship and Deuteronomy (NIV Application Commentary). Highly acclaimed commentaries have been Judges, Ruth (New American Commentary) and two volumes The Book of Ezekiel Chapters 1-24; The Book of Ezekiel Chapters 25-48. (New International Commentary on the Old Testament).

Jacob Milgrom is Professor Emeritus of Biblical Studies at the University of California, Berkeley. The author of five scholarly books and more than two hundred articles, he was named a fellow of the Guggenheim Foundation, a fellow of the Institute for Advanced Studies in Jerusalem, and a senior fellow of the Albright Institute of Archaeological Research. Now retired, he and his wife, Jo, live in Jerusalem.