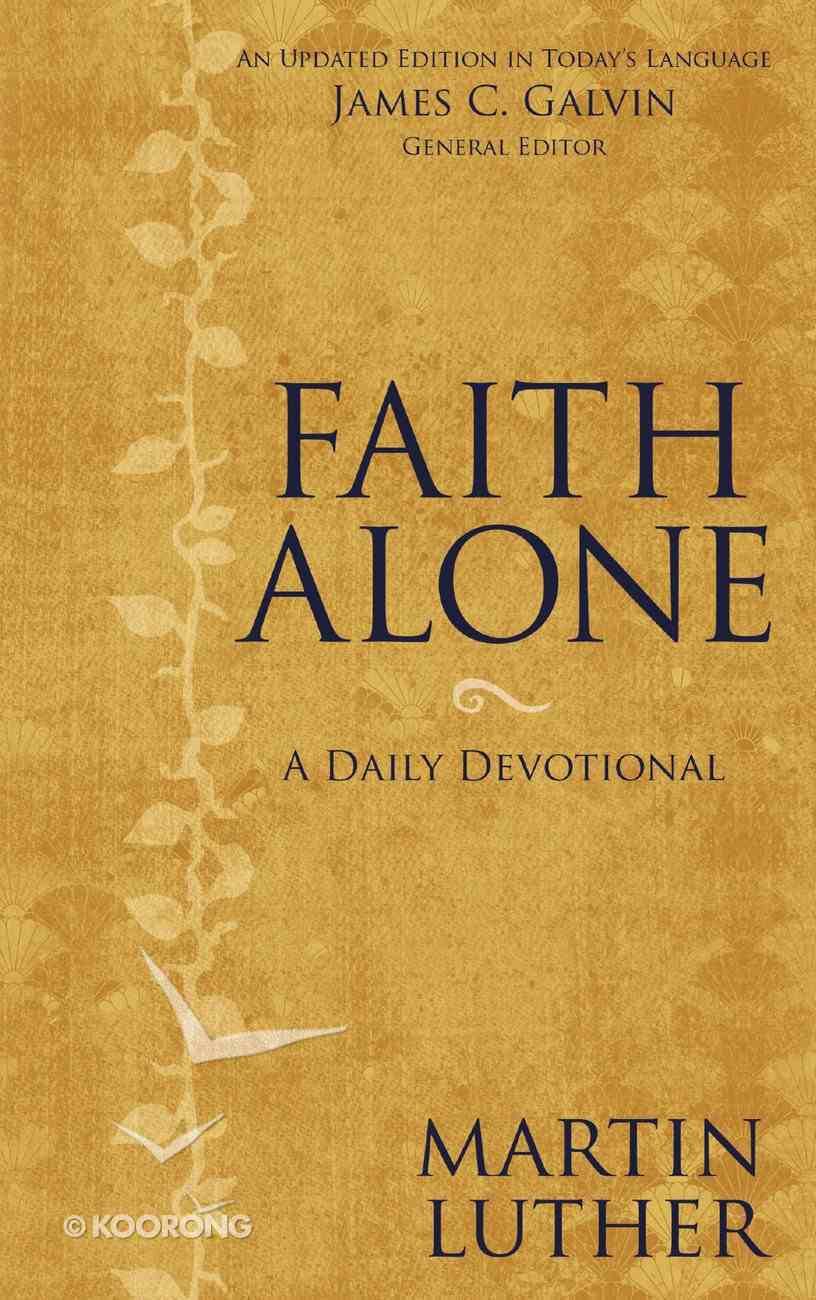 Katharina and Martin Luther: The Radical Marriage of a Runaway Nun and a Renegade Monk
Michelle Derusha
Hardback

Faith AloneCopyright 1998, 2005 by James C. GalvinRequests for information should be addressed to:Zondervan, Grand Rapids, Michigan 49530Library of Congress Cataloging-in-Publication DataLuther, Martin, 1483-1546[Selections. English. 2005]Faith alone : a daily devotional / Martin Luther; James C. Galvin,general editor.-Updated ed. in today''s language.p. cm.Rev. ed. of: By faith alone. 1998.Includes index.ISBN-10: 0-310-26536-3ISBN-13: 978-0-310-26536-81. Devotional calendars. I. Galvin, James C. II. TitleBR331. E6 2005242''.2-dc222005004702This edition printed on acid-free paper.An edition of this work was previously published by World under the titleBy Faith Alone 1998 using God''s Word translation. This updated editionis based on the New International Version.All Scripture quotations, unless otherwise indicated, are taken from the HolyBible: New International Version. NIV. Copyright 1973, 1978, 1984 byInternational Bible Society. Used by permission of Zondervan. All rightsreserved.All rights reserved. No part of this publication may be reproduced, stored ina retrieval system, or transmitted in any form or by any means-electronic,mechanical, photocopy, recording, or any other-except for brief quotationsin printed reviews, without the prior permission of the publisher.Interior design by Michelle EspinozaPrinted in the United States of America05 06 07 08 09 10 11 12 /?DCI/ 10 9 8 7 6 5 4 3 2 1IntroductionMartin Luther is one of the most important figures in church historybecause God used him to launch one of the greatest revolutionsof all-the Reformation. His writings are nearly five hundredyears old yet still meaningful for us to read today.Born in Germany in 1483, Luther studied law at the Universityof Erfurt. During a violent thunderstorm, he made a dramaticvow to become a monk and soon after entered the Augustinianorder. After rigorous academic study and intense, personal struggleto find God''s approval, he rediscovered the gospel. He realized thatwe are saved by faith alone. After he was ordained, he was sent tothe University of Wittenburg to teach theology. While there in1517, he nailed the Ninety-five Theses on the church door to invitea theological debate. The topics he listed caused such a furor thatthe debate never took place. As Luther continued to write, preach,and teach, he quickly became the leading figure and focal point ofthe Reformation.Luther was a professor, theologian, former monk, scholar,author, Bible translator, and defender of the faith. But he was alsoa pastor, husband, father, and good friend to many. Luther wasprolific. Besides writing commentaries, theological papers, andletters to friends, his students and followers took careful notes ofhis university lectures, sermons, and later in life, even his dinnerconversations. He died in 1546 at the age of sixty-three.These selections, originally written by Martin Luther between1513 and 1546, have all been freshly translated into English forthis devotional. The goal was to make this edition both accurateand easy to understand. I selected the readings primarily fromLuther''s sermons, commentaries, and other devotional writings.These selections cover topics both theological and practical. Someof the theological themes you''ll find include the centrality of Christ,justification by faith alone, the authority of Scripture, and theimportance of putting faith in God above human reason. Practicalthemes include the struggle against sin and temptation, prayer,humility, the handling of wealth and possessions, the value of everydaywork, the importance of marriage and family, and love forneighbor. You may read one selection a day according to the dateor explore themes using the subject index located in the back ofthe book.The verse at the beginning of each reading is usually the onethat Luther was writing about or preaching on. At times I''veattached a different verse that better fits the theme of the devotionalthought. If you want to read more on the topic or view t
-Publisher