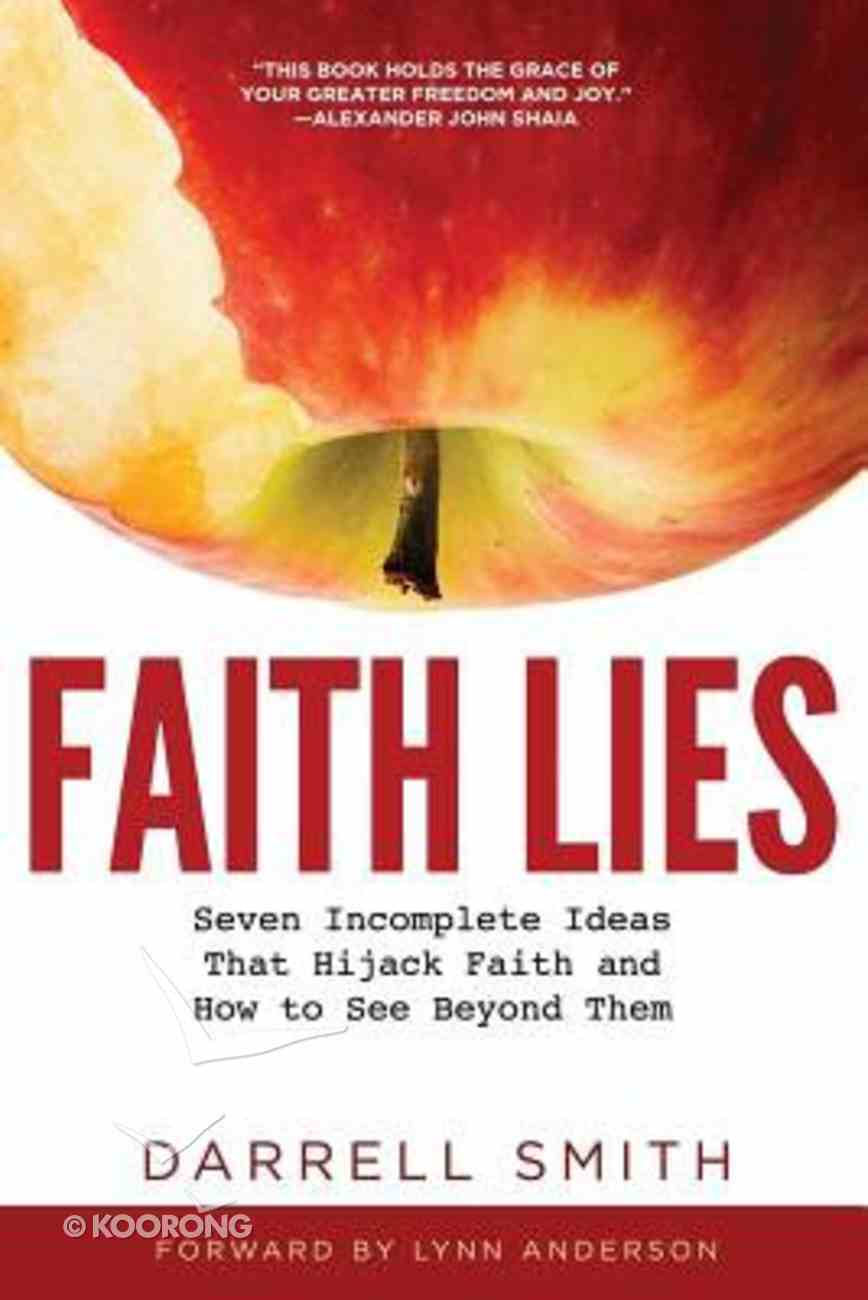 Faith Lies: Seven Incomplete Ideas That Hijack Faith and How to See Beyond Them

: Faith Lies: 7 Incomplete Ideas That Hijack Faith and How to See Beyond Them is for people noticing the cracks in the foundation of their faith as well as those who feel they have been hurt or discarded by...

4 available
Expected to ship within 10 hours from Australia.
Learn More
Free Shipping
for orders over $99.

:
Faith Lies: 7 Incomplete Ideas That Hijack Faith and How to See Beyond Them is for people noticing the cracks in the foundation of their faith as well as those who feel they have been hurt or discarded by a God or a faith that just does not make sense.


Faith lies are those seemingly required religious ideas or spiritual beliefs that are often confusing and rarely helpful.


LIE 1 -- The Bible is the Literal Word of God -- The Bible is not the written record of God's dictation. God was most certainly the inspiration for the Bible, but not the medium. People were the medium-they did the storytelling, the writing, the selecting, and the interpretation that resulted in the Bible. The Bible is not God's Bill of Rights and Constitution. Rather, it is a divinely inspired story of progression that should open things up rather than constrict and regulate.


LIE 3 -- The Devil is God's Counterpart -- This is the bad idea that the Bible presents a continuous, consistent narrative about the devil. It simply does not. Moreover, when we string together what we actually have--disparate statements about satan made by different people, from different places, languages, cultures, and times--we arrive at the strange notion that there is a "good" god who is responsible for the "good" things in our lives and a "bad" god (satan) who handles the "bad" stuff.


LIE 4 -- I Am Supposed to Protect and Defend God and My Faith -- There are real tensions and conflicts around the globe today that are built on the notion that as people of faith, one of our jobs is to defend our faith or our God. Rather than settling for a god who needs our protection, we can follow the powerfully divine thread of moving "beyond the tribe" that is found throughout the Bible.


LIE 5 -- There is One Right Way to Believe and One Right Way to Behave -- One of the root lies of fundamentalism--in all faiths--is the notion that true faith is defined by believing the right things and acting the right way. Isn't it more likely that we are all part of a diverse creation that flows from a God that cannot be contained by any one belief or behavior?


LIE 6 -- Faith is a Private Matter -- Much like whom we voted for in the last election or how much money we make, people have wrongfully accepted the idea that faith is a private matter and not to be shared with others. The spiritual life has always been a communal life. We require others to undertake our journey, and others need us, too.


LIE 7 -- Real Faith is Blind Belief -- The idea that true faith has no doubts or questions creates a powerless and impotent faith that discourages critical thinking and fosters the ridiculous assumption that science and faith are unrelated. Real faith actually requires doubt, criticism, and exploration in order to change us-let alone change the world.


While the loud voices at the margins adamantly declare faith either completely irrelevant or capable of being contained in one narrow ideology, most people get lost in the mix, feeling no certainty or comfort in either direction. Faith Lies deconstructs the terrible notion that faithlessness and fundamentalism are our only options.

Rev. Dr. Darrell Smith is a teacher, writer, and an aspiring integral theologian who has served in the Methodist church since 1999.nbsp; He also serves as a director of C3--a non-profit organization committed to conversations and connections that serve people and the common good.nbsp;Darrell's exploration--and at times protest--of religion and spirituality has led him to homeless shelters, prisons, refugee ghettos, and recovery groups as well as universities, temples, synagogues, and mosques.

A Long Obedience in the Same Direction: Discipleship in An Instant Society
Eugene H Peterson
Paperback

Twelve Ordinary Men: How the Master Shaped His Disciples For Greatness, and What He Wants to Do With You
John Macarthur
Paperback