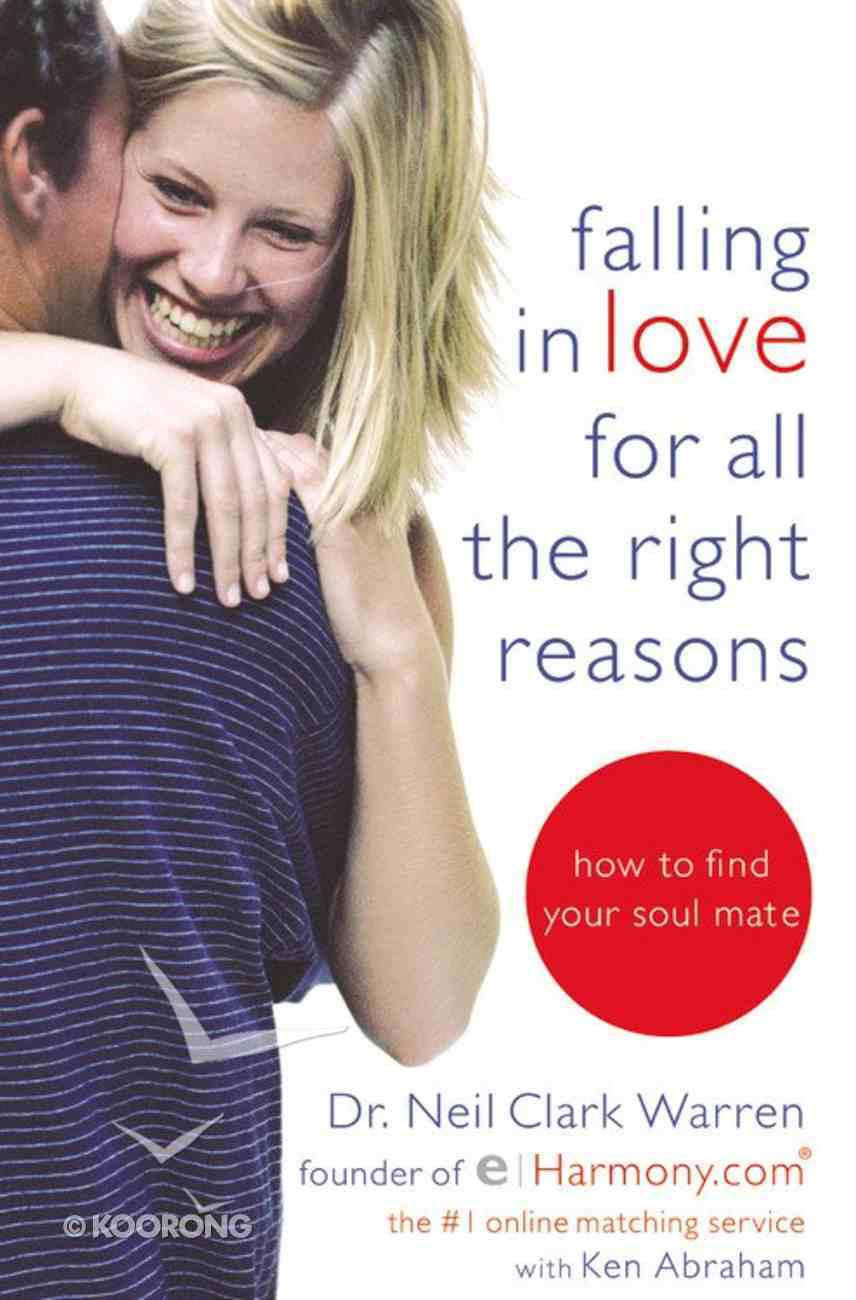 Falling in Love For All the Right Reasons

Dr. Neil Clark Warren is the mastermind behind eHarmony.com--an Internet matchmaking service that encourages readers to find "true love" rather than a slew of Saturday night dates. His basic shtick is that "broad-based compatibility" is the glue for making a...

True Love Dates: Your Indispensable Guide to Finding the Love of Your Life
Debra Fileta
Paperback

Single Me: Learning to Love the Unwanted Path of Singleness
Neri Morris
Paperback

Dr. Neil Clark Warren is the mastermind behind eHarmony.com--an Internet matchmaking service that encourages readers to find "true love" rather than a slew of Saturday night dates. His basic shtick is that "broad-based compatibility" is the glue for making a partnership loving and lasting. Falling in Love offers 29 "dimensions of compatibility" to consider before committing to a romantic relationship. His formula is so, well, formulaic, it threatens to take all the mysticism and romance out of finding a soul mate. That's fine with Warren, who believes that readers who screen partners for compatibility will fare much better than spirit-struck lovers who base commitments on profound immediate attraction.- Warren begins with weeding out bad characters. "If one of the partners in a relationship lies, cheats, or steals, that bad character will eventually undermine the relationship." Even if you're not the victim of these behaviors, you will be, claims Warren. So run, don't walk from the relationship. Seems like obvious common sense. Yet advice columnist are constantly answering letters from unhappily married men and women, complaining about these very forms of broken trust.- Warren also encourages readers to stop ignoring the early "red flags" of addictive personalities and psychological issues, such as chronic depression. Demand that the partner commit to professional help before you go any further with the relationship, he advises. Other compatibility issues include anger management, sexual passion, and family planning. While his advice is solid, it is conservative. For instance, he does not address homosexual love or allow homosexual partnering on his web site. Also, most of the discussion is geared toward traditional marriage as the final goal. --Gail Hudson
-Publisher

Dr. Neil Clark Warren, founder of eHarmony, offers essential information allowing singles to immediately gauge whether a prospective mate is truly compatible, avoid the emotional pain of spending years with the wrong person, and be confident that the love they've found will last.
-Publisher

As one of America's best-known relational psychologists, Dr. Warren earned his Master of Divinity from Princeton Theological Seminary and his Ph.D. in clinical psychology from the University of Chicago. His first book, Make Anger Your Ally, was heralded a 'must read' by Time magazine, and his best-selling Finding the Love of Your Life won a Gold Medallion. Learning to Live with the Love of Your Life, and Loving It was selected by USA Today as an outstanding contribution to the field of marriage. His most recent books are God Said It, Don't' Sweat It and How to Know if Someone Is Worth Pursuing

Surviving Singledom: Or Hang in There!
Steph Penny
Paperback

True Love Dates: Your Indispensable Guide to Finding the Love of Your Life
Debra Fileta
Paperback