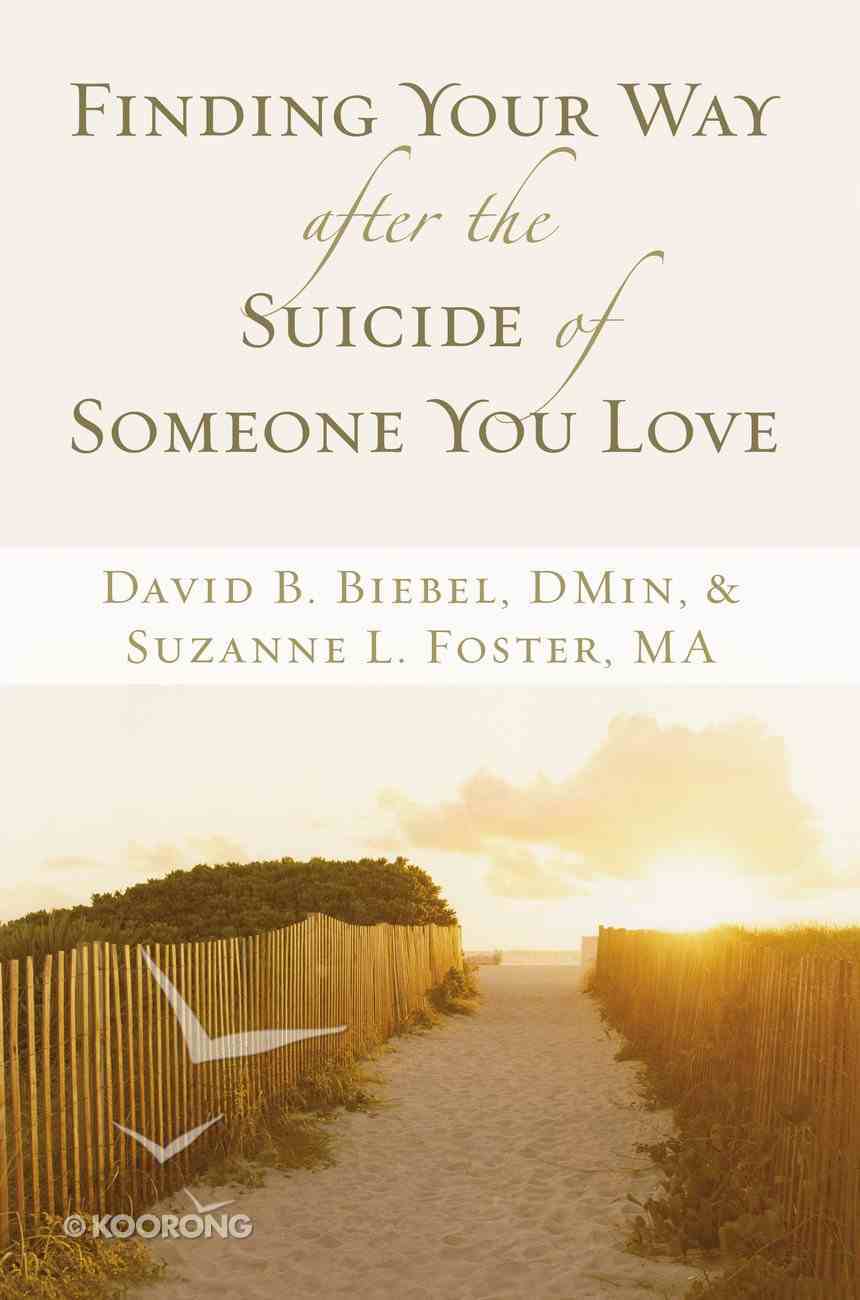 Finding Your Way After the Suicide of Someone You Love

Help and Hope for an Unexpected JourneyDo real Christians commit suicide? Yes, they do. And for those left behind, the journey following such a tragedy is unbearably painful. Finding Your Way after the Suicide of Someone You Love is a...

10 available
Expected to ship within 13 hours from Australia.
Learn More
Free Shipping
for orders over $99.

Help and Hope for an Unexpected JourneyDo real Christians commit suicide? Yes, they do. And for those left behind, the journey following such a tragedy is unbearably painful. Finding Your Way after the Suicide of Someone You Love is a compassionate and practical guide that addresses the intensely personal issues of survivors of suicide (SOS). This gentle and faith-affirming resource helps survivors know what to expect, especially during the first year following a suicide. It includes personal stories of survivors and suggestions on how to move beyond survival to live life again. Designed for use by individuals, couples, and SOS groups, this book offers help for parents, siblings, friends, and extended families, as well as practical guidelines for pastors, Christian counselors, and other church leaders. Topics include: - What to do in the immediate aftermath of a suicide- Handling guilt and understanding the role of depression in suicides - Dealing with questions of faith and meaning -
-Publisher

Finding Your Way after the Suicide of Someone You Love Copyright 2005 by David B. Biebel and Suzanne L. Foster Requests for information should be addressed to: Zondervan, Grand Rapids, Michigan 49530 Library of Congress Cataloging-in-Publication Data Biebel, David B. Finding your way after the suicide of someone you love / David B. Biebel, Suzanne L. Foster. p. cm. Summary: "This resource provides encouraging and practical help and hope for those left behind after the suicide of a loved one"-Provided by publisher. Includes bibliographical references. ISBN-10: 0-310-25757-3 (softcover) ISBN-13: 978-0-310-25757-8 1. Suicide. 2. Bereavement-Psychological aspects. 3. Suicide-Religious aspects-Christianity. 4. Suicide victims-Family relationships. I. Foster, Suzanne L. II. Title. HV6545.B477 2005 248.8'66-dc22 2005002065 All Scripture quotations, unless otherwise indicated, are taken from the Holy Bible: New International Version. NIV. Copyright 1973, 1978, 1984 by International Bible Society. Used by permission of Zondervan. All rights reserved. Scripture quotations marked KJV are from the King James Version of the Bible. Scripture quotations marked NASB are taken from the New American Standard Bible, Copyright The Lockman Foundation 1960, 1962, 1963, 1968, 1971, 1972, 1973, 1975, 1977, 1995. Used by permission. The website addresses recommended throughout this book are offered as a resource to you. These websites are not intended in any way to be or imply an endorsement on the part of Zondervan, nor do we vouch for their content for the life of this book. All rights reserved. No part of this publication may be reproduced, stored in a retrieval system, or transmitted in any form or by any means-electronic, mechanical, photocopy, recording, or any other-except for brief quotations in printed reviews, without the prior permission of the publisher. Interior design by Beth Shagene Printed in the United States of America 05 06 07 08 09 10 11 12 /?DCI/ 15 14 13 12 11 10 9 8 7 6 5 4 3 2 1 What A Thousand Whys I look into the Father's eyes And wrestle with a thousand whys Why this? Why now? Why him, not I? The hurt, the rage, unbridled pain Erupting from my soul, again. If that's the way it's going to be Then build Your Kingdom without me. But then, again, where could I go To hear a word of hope, and know The promise that beyond the pain The ballad has a glad refrain? But what for now? And how can one Still vocalize "Thy will be done"? And soon I hear a song begin, Celestial, but from deep within, A new yet ancient melody Of joy and pain, disharmony. Or do the strains combine somehow, A lovely paradox of sound? -DAVID B. BIEBEL1 CHAPTER 1 Why? Why? Why? What do you mean, she's dead? The words echoed through the chasms of my quickly numbing mind, but I (Sue) couldn't make them come out of my mouth as I struggled to make sense of what the woman on the phone was saying. How can you know she's dead when you aren't even here? We had called 911 because we couldn't get nineteen-year-old Shannon to wake up. Steve, her brother, was trying to do CPR. It was all very strange. She had a smile on her face. Her body was warm. But her color was wrong, very wrong. She's my daughter. She can't be dead. She can't be dead. "Hello," the voice said."Are you still there?" "Yes," I mumbled. "A team is on the way,ma'am.But let me ask again. Can you find a pulse?" I looked at Steve.He shook his head,with tears in his eyes."No.We can't." "Then the girl is dead," the voice said again."There's nothing you can do." How can you pronounce her dead as calmly and callously as you might announce the time or the weather? I wondered.My voice said,"Thank you
-Publisher

Letters to Emma: A Memoir of Grief and God's Love
Lee Carter
Paperback