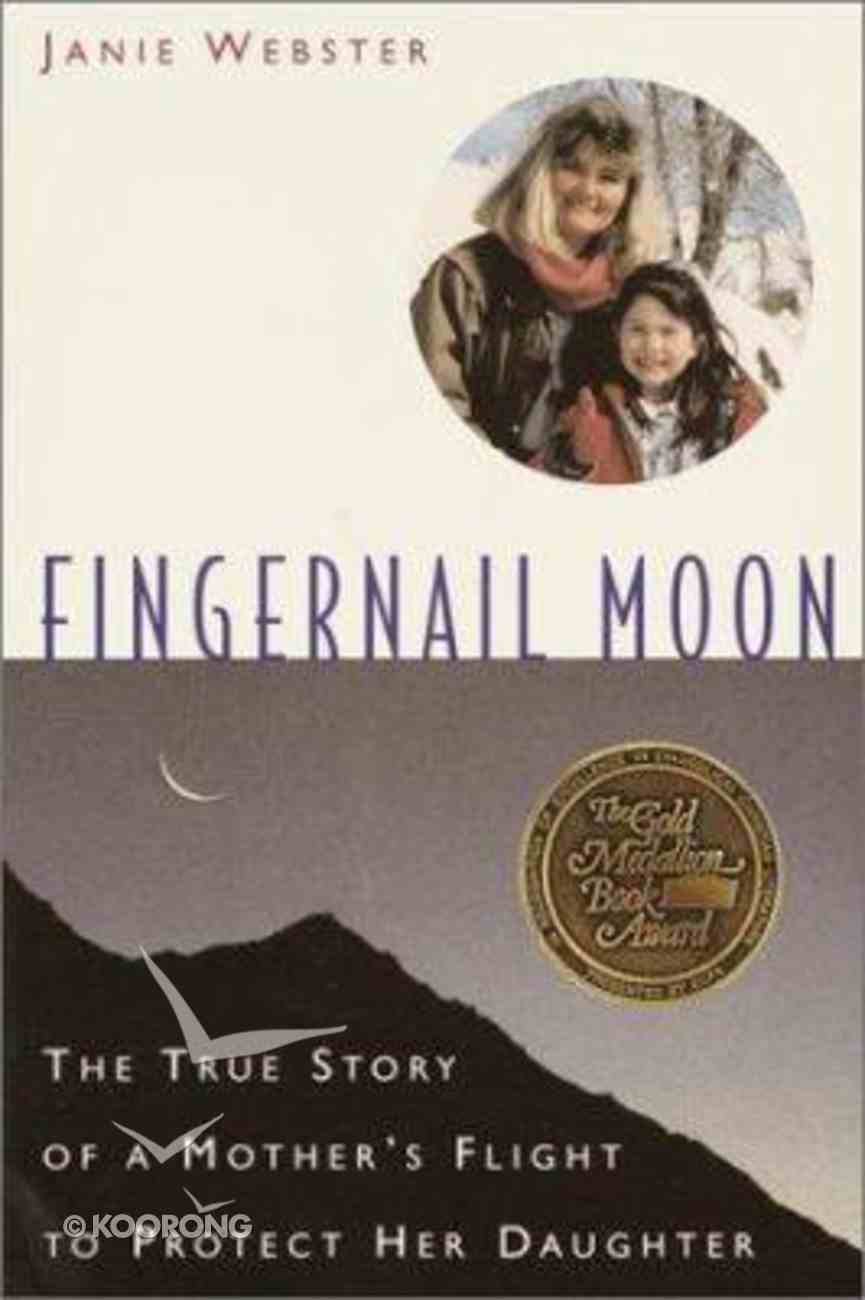 "Sexual abuse is always terrible--abuse by a parent is especially painful. To protect her daughter,  Janie Webster took her on a pilgrimage around the world--their courage as it is reflected in this book is inspiring; the hope and faith that sustained...

A Chance in the World
Steve Pemberton
eBook

"Sexual abuse is always terrible--abuse by a parent is especially painful. To protect her daughter,  Janie Webster took her on a pilgrimage around the world--their courage as it is reflected in this book is inspiring; the hope and faith that sustained them both are deeply impressive." --Esther Rantzen, BBC
-Publisher

"Fingernail Moon, "the true story of a mother and daughter's courageous journey. An inspiring story of Janie Webster's daring quest to save her daughter's life. ^When Webster discovered that her husband had sexually abused their daughter, her seemingly content life changed forever. She began divorce proceedings, but the court allowed unsupervised visits between father and daughter. Then her husband was diagnosed with AIDS. Terrified that he could further abuse and even infect their daughter, Janie Webster knew that she had to flee. ^Mother and daughter embarked on a five-year journey around the world. Although often discouraged, they found within their physical journey a deep spiritual meaning. With God's guidance, they established and reestablished new lives in the countries where they stayed, finding people they could trust who provided them with friendship and assistance. Despite the threat of deportation and imprisonment hanging over them, they sensed the hand of God enginee
-Publisher

Janie Webster lives with her daughter in Kentucky. She is the president of Abused Children Talk in Kentucky (ACT in KY). ý"From the Hardcover edition."

A cold coming we had of it,
Just the worst time of the year
For a journey, and such a long journey . . .
--T.S. Eliot, Journey of the Magi

Once in the truck, I tell my daughter, Ellen, that we are going for a ride. As a six-year-old, Ellen lives in the present and going for a truck ride is the only explanation she needs. She has no inkling that she is embarking on a long journey. Neither of us knows that we will never return to our home and life in San Francisco.

Earlier in the evening as I prepare for this moment, excitement surges so strongly through my body that I doubt whether I could carry on a conversation without revealing my intentions. Don't let the telephone ring, God. Alone in the house, I pace between the kitchen and my bedroom as I pack last-minute items. The cast-iron skillet on the kitchen stove alludes to the possibility that I may be going from the frying pan into the fire. Should I take my daughter and risk the unknown, or should I stay and risk what I know?

As I secure the house to depart, fly-on-the-wall observers might discern that I am going out for the evening, but they would be wrong. After placing the supper dishes in the dishwasher, I say goodbye to my kitchen by pondering for an inordinate amount of time on what to do with the leftover chicken. If I put it in the garbage can, it could be weeks before the garbage is put out for collection. Eventually, I store the chicken casserole in the refrigerator, thinking perhaps Ellen and I could eat it tomorrow evening. Laughing nervously in the quietness, I wonder if I will "chicken out" at the eleventh hour. Thus far, the most irreversible action has been pouring milk down the drain. No train tickets have been purchased, and the $100 bills, which are becoming moist next to my body, could be redeposited. Few friends would be the wiser if I decide not to go through with the plans for this evening.

The doorbell shatters the silence like the breaking of glass. The arrival of this encounter with Jim, Ellen's father, brings both relief and apprehension. Every inch of my body is as taut as a stretched rubber band. At the time arranged, he brings her home following a two-day visit. I do not encourage him farther than the hall, fearing that his suspicions may be aroused by the emptiness of the refrigerator. Ellen wriggles on the carpet as her father discusses plans for picking her up after school on Monday, forty-five hours from now, the lead time before Jim becomes aware of our departure. My voice sounds high-pitched and unsteady, altered by the pounding pulse in my throat. I want to blurt out that this might be the last time he sees his daughter, but the urge dissipates in fear. After the door shuts, I anguish whether my intentions to flee with Ellen have been transparent. If Jim suspects anything, he could phone the police, or even wait on the street and track us himself.

Timing is critical. When the doorbell rings later, I fear that Jim could be returning something Ellen left behind in his car. What a relief to hear the voice of my coworker Stephen, who is helping us escape. Turning off lights as we go through the house, Ellen and I meet him downstairs after he backs his truck into the garage. While Stephen distracts Ellen, I transfer our luggage into the back of the truck. Ellen eagerly slips into the front seat, expecting a truck ride before bedtime. As I stand in the dark garage after the truck has pulled into the driveway, all that remains to be done is activate the garage door-closer and hasten under the cascade of descending metal. Now that the truck is in full view of neighbors and passersby, I charge from the house as if an explosion is imminent, intent on leaving the premises as quickly as possible. If Jim is watching, hopefully he will think I am running to escape the rain. Before the garage door makes contact with the asphalt, the three of us are on our way toward the Bay Bridge. I look back over my shoulder at our rain-soaked stucco home without becoming a pillar of salt.

The beads of rainwater on the windows distort the view inside and out, hiding from the outside world the three occupants of the truck. For the first time in my life, I attempt to disguise my appearance, but I draw the line at changing hair color. When everything else is changing in my life, I need to recognize myself in the mirror. Amid the rain spots on the rearview mirror, my appearance has been significantly altered just by stuffing hair into a cap and wearing glasses, but I shiver at the thought of being identified while stopped at a traffic light. So I sit on my left hip, facing the interior of the truck and my daughter's side.

As we cross the Bay Bridge, I wonder if another big earthquake will strike at this moment, our journey beginning and ending in the water below. No perceptible earth movements occur to impede our advance; the only upheaval seems to be along the fault lines of my emotions. The downpour creates the illusion of traveling within an insular bubble that bursts upon arrival at the Amtrak station. Since the ticket office is closed, the waiting passengers remain in vehicles to keep warm and dry. I dread contact with the outside world, fearing that someone will recognize me.

The onward rush of recent days comes to a standstill as the scheduled arrival time of the train comes and goes. Waiting is insufferable when freedom depends on leaving city, county, state, and country quickly. Conversation between the three of us takes place in fits and starts because there is little to talk about; the past is slipping away, and the future is a slippery unknown. The absence of conversation releases my mind to speculate on what could happen to us as fugitives. If money runs out, will strangers believe our story and extend mercy? One friend advises hiding in a convent, as in The Sound of Music. "How long, O Lord?" is the pivotal question, thinking about returning before committing to departure. The knowledge that sleeping in our beds is only thirty minutes away is comforting. Our vulnerability overwhelms me.

Waiting generates questions from Ellen: "Mommy, are we going on a train? Where are we going?" With meager enthusiasm, I tell her, "Sweetheart, we are going on an adventure. I'm not exactly sure where this adventure will take us, but it will be exciting." As a six-year-old who reads fairy tales, Ellen views know-as-you-go travel differently from me. Serendipity is a matter of course in adventure stories like Alice in Wonderland, which have prepared her for boarding an "adventure" train. Telling her about spending a night in Seattle would inform Stephen of our plans. If friends and family aren't aware of our whereabouts, they can answer investigative questions truthfully, "I don't know." Ellen's response to our "adventure" concerns me more than the uncertainty of times and places. The greatest unknown is how she will respond to being cut off from family, friends, home, school--and father. Will she resent me for turning her life upside down, or thank me? A friend, an adult survivor of child sexual abuse, believes with all her heart that Ellen will be grateful. Whatever the outcome, Ellen's trust in me will be put to the test.

As a gift for our journey, Stephen presents me with a roll of coins for making phone calls. The expediency of this thoughtful gift takes me a step further toward resolve. When the train is an hour late, the roll is opened on the spot to call a distant Amtrak office. The estimated arrival time is one hour from now. I worry about what effect this delay will have on the rendezvous in Seattle with Tiffany, the daughter of a San Francisco friend. The store of change diminishes further when I call Seattle to confirm our arrival tomorrow evening. Reluctantly, I entrust my precious message to an answering machine.

The onward rush begins once more when the train pulls up to the platform. During the "pause," a change has occurred within me. The emotional cord with life in San Francisco has been cut. All thoughts of sleeping in our beds have vanished. I accept the mandate to protect Ellen from being sexually abused by her father again, and I am ready to run with my decision.

Action is an antidote for fear. Holding Ellen's hand, I spring toward the train like a cat toward its prey. Stephen sets our suitcases on the platform and leaves without saying anything; his words and deeds have already wished us well. Besides, customary farewells don't fit the context of this goodbye. Lifting the bags into the dark passageway between the cars, I place Ellen beside them. For an instant, I hang suspended with one foot on the train step and the other dangling. The unknown pulls at my ankles like weights, holding me back until I shift my gaze upward toward my daughter's expectant face. The point of no return overtakes the eleventh hour as the train moves toward Seattle.

Memoirs of An Ordinary Pastor
D A Carson
Paperback