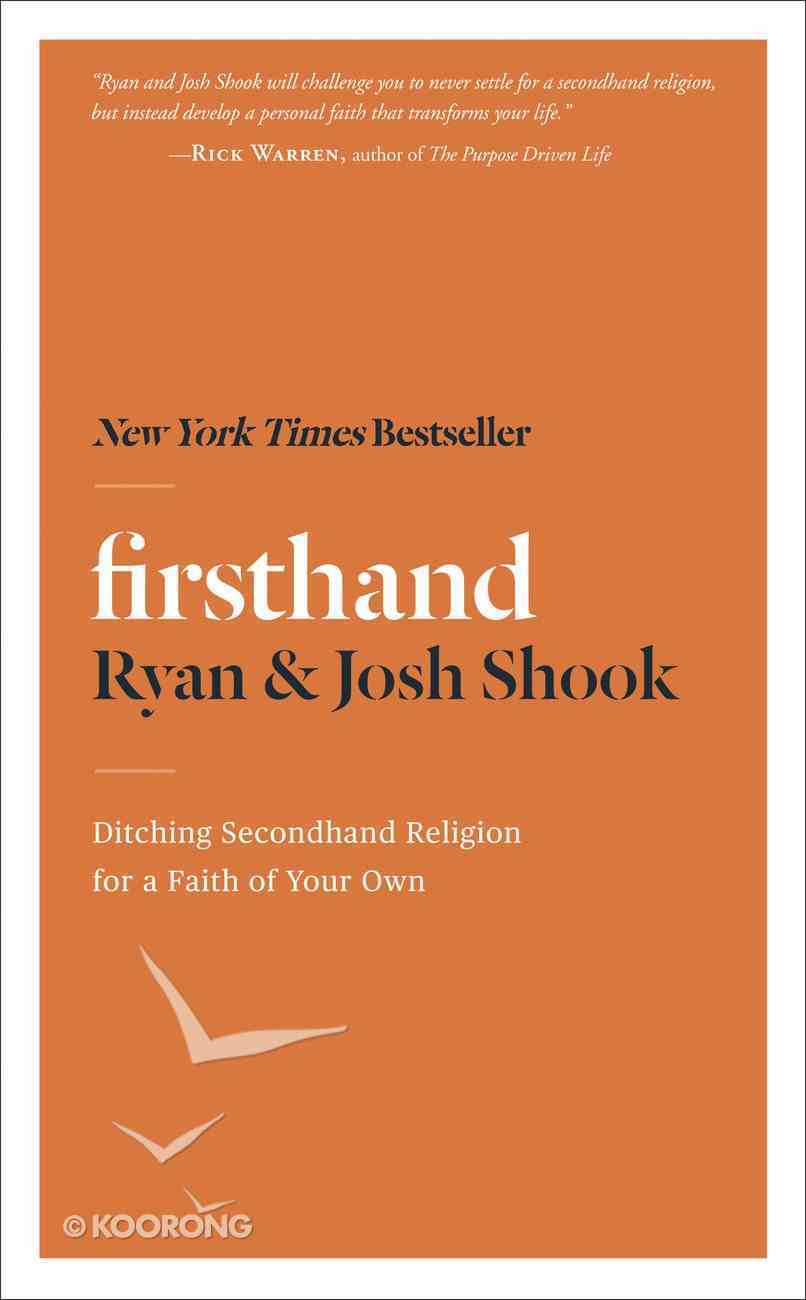 A "firsthand" faith is never what somebody tells you it should be, even if that person is a parent, friend, or pastor. "Firsthand" means you went after it for yourself and now it's all yours. That kind of faith is...

Master of One: Find Focus on the Work You Were Created to Do
Jordan Raynor
Hardback

Own Your Everyday: Overcome the Pressure to Prove and Show Up For What You Were Made to Do
Jordan Lee Dooley
Hardback

The Very Good Gospel: How Everything Wrong Can Be Made Right
Lisa Sharon Harper
Paperback

A "firsthand" faith is never what somebody tells you it should be, even if that person is a parent, friend, or pastor. "Firsthand" means you went after it for yourself and now it's all yours. That kind of faith is changes everything, but most people only find it by facing tough questions. Like:

* If God is real, why does he feel far away?
* Can I ever get past the dos and don'ts of church?
* Why should I even try to follow God when I fail so often?
* How do I experience a relationship with Christ that's more than surface level?
* Is it possible to have authentic faith when I have so many doubts?
* How can I connect with others who take firsthand faith seriously?

In these pages, Ryan and Josh Shook talk candidly about growing up in church only to realize that "how things are supposed to be" had stopped working for them. They set out to find what makes a young person's faith stick-or not.

Each chapter is designed to spark a discussion, and comes complete with personal inventories, Bible teaching, small-group discussion questions, and links to original video.

Now includes bonus "Looking Back from Here" Q&A with the authors.

:Join us on a journey to find a faith of your own.
A faith that isn't your parents' or your youth pastor's or your church's.
Start from scratch, question everything, and get hold of a faith that's real.
We call it firsthand faith.

"It's rare to find young people unafraid to voice their doubts while still being bold in their faith. Ryan and Josh are two of those people."
-Mark Batterson, lead pastor of National Community Church, Washington, DC, and author of the New York Times bestseller The Circle Maker

"All Christian parents want their children to develop a faith of their own. Firsthand asks tough questions and guides those with a secondhand faith to find Christ for themselves."
-Craig Groeschel, pastor of LifeChurch.tv, Edmond, OK, and author of Soul Detox

"Josh and Ryan Shook, the sons of well-known pastor and author Kerry Shook, have fully embraced the fact that although their dad gave them a great start, they need to run their own race. Learn how to embrace a firsthand faith and walk in the strength of a personal relationship with Christ."
-Steven Furtick, lead pastor of Elevation Church, Charlotte, NC, and author of the New York Times bestseller Greater

"Ryan and Josh Shook don't shy away from the tough questions but face them head-on in this powerful book that will encourage young adults not to settle for an inherited faith but to discover a true relationship with Jesus that is unique, exciting, and every bit their own."
-Pete Wilson, pastor of Cross Point Church, Nashville, TN, and author of Plan B
-Publisher

RYAN SHOOK is a filmmaker and blogger. A graduate of Baylor University, he is married to Sarah, and they live in Los Angeles, California.

JOSH SHOOK is a musician, a song writer, and a graduate of Belmont University. He lives in Nashville, Tennessee.

:Why Firsthand Matters
A Faith Straight from the Source

There comes a time when you can no
longer cling to your parents&rsquo; coattails
and you have to choose to make it
your faith.
&mdash;Robert Griffin III

We&rsquo;ve met before, actually. You see, even though you&rsquo;ve probably never met us personally, you know people just like us. You&rsquo;ve known them at every church you&rsquo;ve attended. We&rsquo;ve been on your football team, gone to the same parties, been in your group of friends.

You took one look at us and thought, They&rsquo;re such good Christians. But you saw us when we were at our best. We were the leaders of the youth group, and you thought we probably had it all together.

So how could we possibly relate to you?

The truth is, we&rsquo;ve both come back from the brink of spiritual death. Really. Only a short time ago we were so done with the whole Christian thing. Whatever we looked like on the outside, inside we were desperate for something more. Nothing at church satisfied the inner hunger gnawing at us. Being a Christian seemed to be only about going through the motions, following rules, keeping up appearances.

So we tried something else. We lived as if God didn&rsquo;t exist. That worked for a while. And then it eventually stopped working. Actually, we ended up feeling even more desperate and unfulfilled than before.

If any of these scenarios apply to you, you&rsquo;re not alone. The truth is, between the ages of sixteen and twenty-six,
most young people experience a crisis of faith. Suddenly the beliefs that made sense yesterday are no longer relevant today. Our faith feels flimsy and fake.

For us it felt something like this: We had traveled halfway across a bridge and couldn&rsquo;t get any further. The bridge just
ended. On the riverbank behind us, we could see the Christianity that worked when we were younger. Ahead of us, on the opposite bank, we could see, well, not much really. Mostly fog.

As it turns out, our experience is common for kids who grew up in church. David Kinnaman, president of the Barna Group, a research and resource organization, investigated our generation&rsquo;s dissatisfaction with traditional Christianity for his book You Lost Me. &ldquo;The problem,&rdquo; Kinnaman tells us, &ldquo;is not that this generation has been less churched than children and teens before them; the problem is that much spiritual energy fades away during a crucial decade of life&mdash;the twenties.&rdquo;1

We had traveled halfway across a bridge and couldn&rsquo;t get any further. The bridge just ended.

Spiritual energy fades away. That description resonates deeply with us. After years of going to church, following the rules, and trying to replicate the faith of our parents, we had to admit that something was fading fast in our souls.
But there&rsquo;s good news.

Right in the middle of our personal crises, we made a discovery that changed everything.

What we discovered was that what we thought was our faith wasn&rsquo;t ours after all. Not completely. Mostly it belonged to our parents. Some of it belonged to the youth pastor or our friends. Sure, some of it was real for us too. But a lot of it wasn&rsquo;t. If you had closely inspected our personal beliefs, you might have noticed some flimsy plastic labels hanging on them.

On them would have been scribbled &ldquo;Secondhand.&rdquo;

Our faith was something we had inherited, and it felt like it was not originally intended for us. That wasn&rsquo;t our parents&rsquo; fault. Or the youth pastor&rsquo;s. Or the church&rsquo;s.

Our parents taught us that Christianity wasn&rsquo;t about religion and rules but about a relationship with the God who made
us. Yes, they made mistakes. But we saw them live out a genuine faith in front of us&mdash;two imperfect parents seeking to trust a perfect God. We truly feel blessed to have parents who have a real and authentic faith. But it&rsquo;s theirs.

It doesn&rsquo;t matter how real your parents&rsquo; faith is, or anyone else&rsquo;s for that matter, if you don&rsquo;t develop a faith of your own. A handed-down faith that you&rsquo;ve never owned for yourself doesn&rsquo;t give meaning to your life. You might sort of wear it, but it doesn&rsquo;t say much about who you are. In fact, hand-me-down beliefs can start to weigh on you. They become a source of shame and guilt, a bar set too high that reminds you of your failures. Or they just seem outdated and irrelevant.

Hand-me-down faith may work when things are going well, but when pressures and problems hit, what you thought you believed will crumble.

&ldquo;I hate to say this, but so many of the so-called Christian kids on this campus really turn me off,&rdquo; Taylor, a university
sophomore on the West Coast, told us. &ldquo;The guys from church party just like the rest. At the frat parties they just want to get the girls drunk so that they can get their clothes off. They say they&rsquo;re Christians&mdash;but come on!&rdquo; That kind of faith is more like a shirt you wear when you&rsquo;re with a certain group of friends. In reality, that kind of faith is not faith at all! It&rsquo;s secondhand religion, and it doesn&rsquo;t get inside your life or change anything about you.

Mike, a university senior we read about, was at least more honest than those frat guys. He told an interviewer he had grown up going to church and learning about God, but in college he wasn&rsquo;t so sure anymore that God even existed. Mike was looking for solid evidence that God is real. He said that during his search he felt like he was an &ldquo;adopted child wanting to know the truth about [my] birth parents.&rdquo;2

We think Mike is right not to rely completely on the faith of his parents just because they are his parents. If you don&rsquo;t believe in God because of your own convictions, there is no point in pretending that you believe at all.