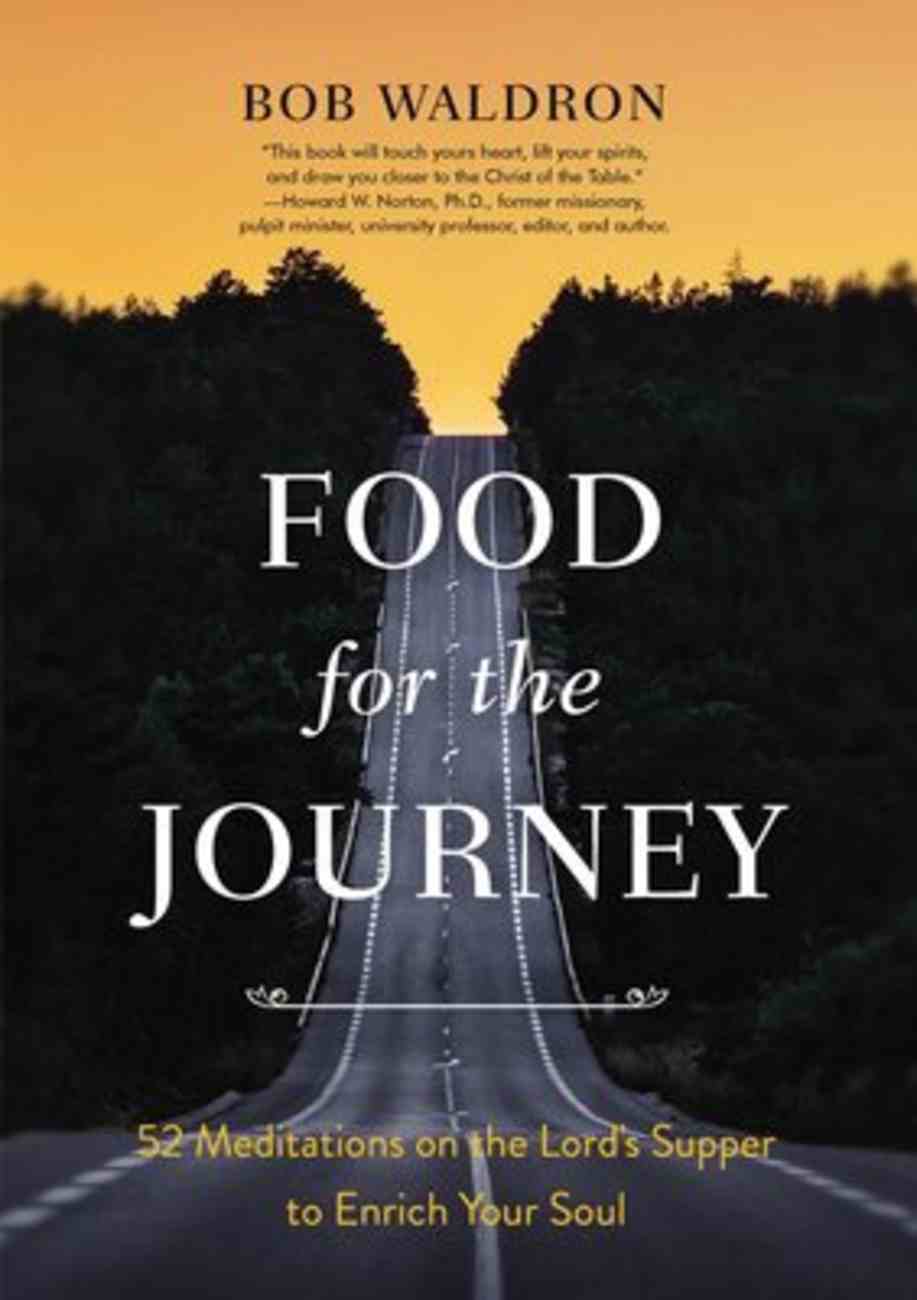 Food For the Journey

In ages long past, when people took Communion, there was a strong sense of the sacred, an echo of Jacob's words, "Surely the Lord is in this place." Food for the Journey focuses on the rich meanings woven into...

In ages long past, when people took Communion, there was a strong sense of the sacred, an echo of Jacob's words, "Surely the Lord is in this place."


Food for the Journey focuses on the rich meanings woven into the ancient tapestry of the Lord's Supper. Meanings Christians in the first century knew so well but about which we today know so little.


This meal is our touchstone, our reminder of God's gracious love and forgiveness. More than wine and bread, it's an oasis, a sacred time spent with Jesus at the Table, experiencing him anew and absorbing him into our beings.


No matter where you are on your walk with God, these meditations will

Draw you closer to the heart of God Make Communion more meaningful Provide strength for the journey ahead.
Written conversationally, Food for the Journey enriches its meditations with insights gleaned from the author's experiences in cultures around the world.

Growing up in a lower-middle-class home, Bob Waldron worked a variety of jobs. He was a deckhand on a fishing boat when he was only thirteen. During his senior year of high school, he worked 40 hours a week at a service station. That's what they called gas stations in the 1950s because, besides pumping gas, they did lube jobs, brake jobs, tune-ups and even changed mufflers.nbsp; Bob met Christ during his freshman year at Pepperdine University and that changed his life forever. While still in school, he married Gina Piedmont, the love of his life and began preaching for a Japanese church in Los Angeles. He graduated with a B.A. in religion and later earned his masters and doctorate degrees in world missions at Abilene Christian University and Trinity Evangelical Divinity School, respectively. At Pepperdine Bob was student body president and received several honors, including being named Outstanding Senior in the Religion Department and selected to Who's Who Among Students in American Universities and Colleges.nbsp;nbsp; Following graduation, Bob preached for a church in Juneau, Alaska, where he fell in love with rainforests, hunting, and fishing. The congregation sent him to India for three months to train village preachers. That trip reminded him of the vow he and Gina had made to serve the Lord overseas. The following year they moved with their three children to Guatemala where they planted churches and trained congregational leaders. Besides journal articles, Bob coauthored with Gailyn Van Rheenen, The Status of Missions, published by Abilene Christian University Press.nbsp; Bob enjoys gardening, writing, and going on adventure trips with his son. They have canoed for five days in the Canadian wilderness, climbed Mt. Kilimanjaro in Tanzania, and traveled 800 miles down the Amazon River on an old Brazilian stern-wheeler, hammocks strung in the open air their only beds. Bob and Gina, now live in the Dallas/Fort Worth area and have three grown children, eight grandchildren, and recently, two great-granddaughters.

Food For the Journey: 52 Meditations on the Lord's Supper to Enrich Your Soul
Bob Waldron
Paperback

Food For the Journey: 52 Meditations on the Lord's Supper to Enrich Your Soul
Bob Waldron
Hardback

What Does It Mean to Be Chosen?: An Interactive Bible Study (Season 1)
Amanda Jenkins, Dallas Jenkins, Douglas S Huffman
Paperback