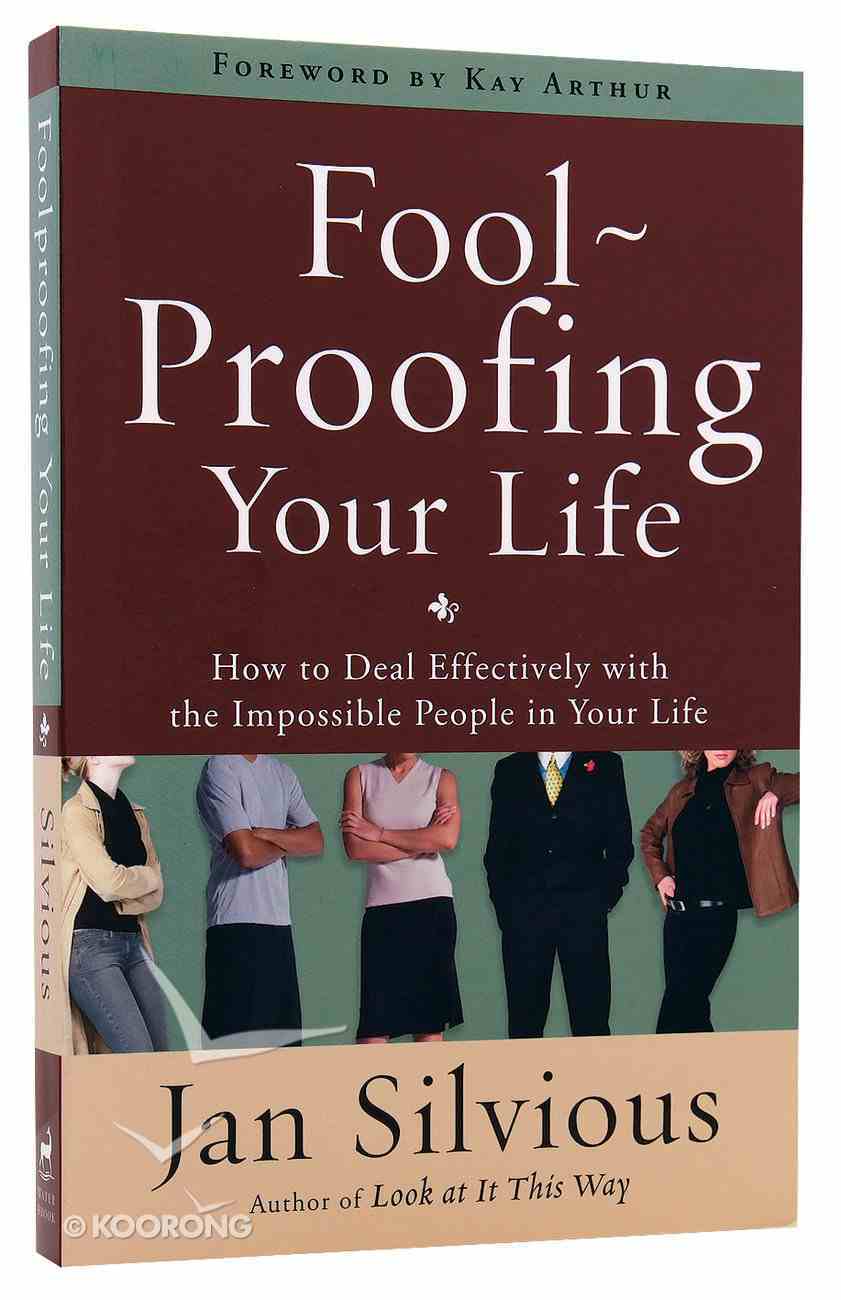 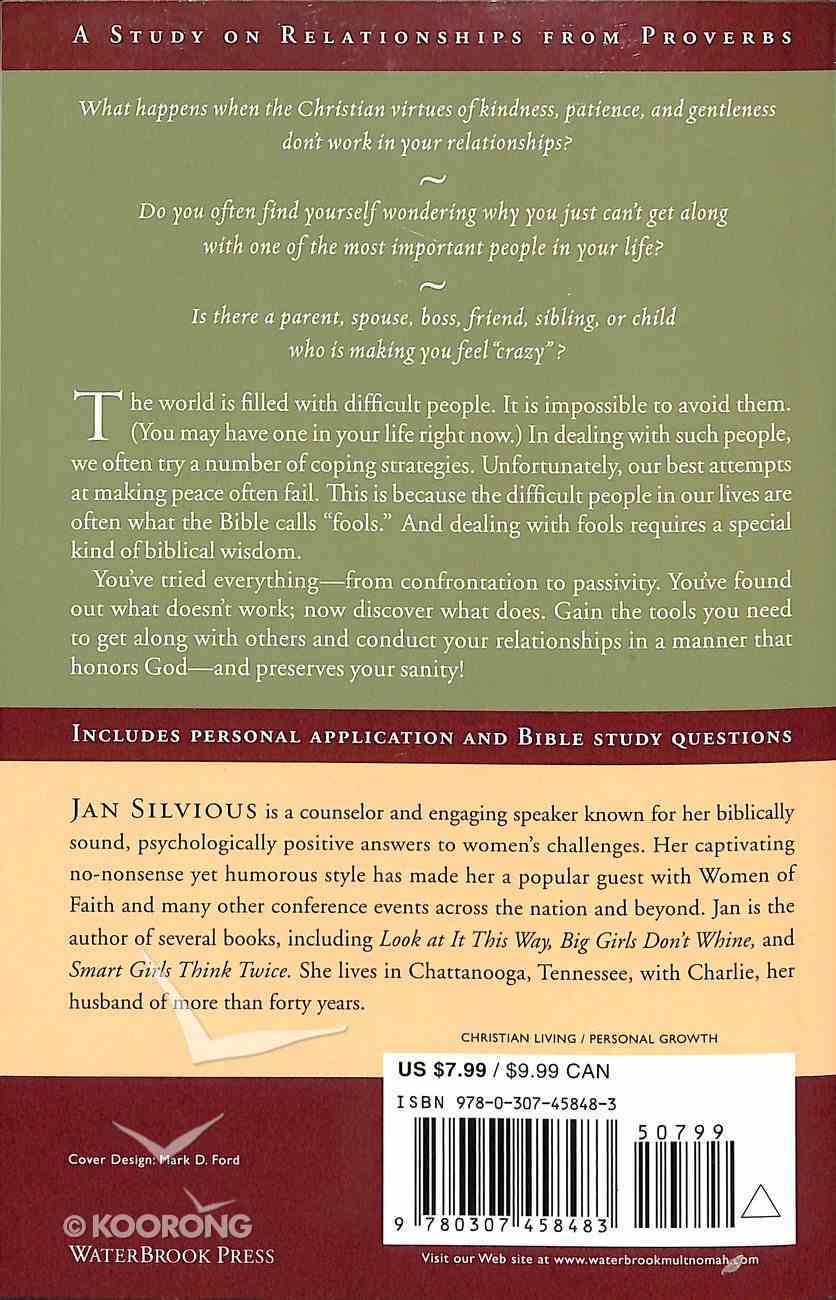 The world is filled with difficult people. It is impossible to avoid them. (You may have one, in particular, in your life right now.) In dealing with such people, we often try a number of coping strategies. Unfortunately, our best...

How to Love Your Neighbor Without Being Weird
Amy Lively
Paperback

As My Parents Age: Reflections on Life, Love, and Change
Cynthia Ruchti
Hardback

Healthy Me, Healthy Us: Your Relationships Are Only as Strong as You Are
Les Parrott, Leslie Parrott
Paperback

The world is filled with difficult people. It is impossible to avoid them. (You may have one, in particular, in your life right now.) In dealing with such people, we often try a number of coping strategies. Unfortunately, our best attempts at making peace often fail. This is because the difficult people in our lives are often what the Bible calls "fools." And dealing with fools requires a special kind of biblical wisdom.

You've tried everything–from confrontation to passivity. You've found out what doesn't work; now discover what does. Gain the tools you need to get along with others and conduct your relationships in a manner that honors God–and preserves your sanity!–in Foolproofing Your Life: Wisdom for Untangling Your Most Difficult Relationships. Learn how new insights from the book of Proverbs can help you respond to those relationships that seem hard to untangle.
-Publisher

Jan Silvious has years of experience as a counselor and Bible teacher. She leads seminars for Moody's women's ministry, she has been a keynote speaker at Moody's Founder's Week, and she is a pre-conference speaker for Women of Faith. Her books include Understanding Women, The Five-Minute Devotional, Foolproofing Your Life, Moving Beyond the Myths, The Guilt Free Journal, and Look At It This Way. Jan and her husband, Charles, make their home in Chattanooga, Tennessee. Her most recent publication is Smart Girls, Think Twice
-Editorial Review.

IS THERE A FOOL IN YOUR LIFE?

Know that wisdom is thus for your soul;
If you find it, then there will be a future,
And your hope will not be cut off.
PROVERBS 2 4 : 1 4, NASB

We have no words for speaking of wisdom to the stupid.
He who understands the wise is wise already.
G . C . LICHTENBERG

Nine-tenths of wisdom consists in being wise in time.
THEODORE ROOSEVELT

The wise man is also the just, the pious, the upright,
the man who walks in the way of truth.
OTTO ZUCKLER

Sally looked wistfully at the other women in the room. She had come to the Christmas party at church reluctantly, hoping to find some peace and joy for her soul. But in the midst of her friends&rsquo; amiable banter, all she could hear were the words of her husband, Don. They were words that had cut her to the quick: &ldquo;You are so dull and stupid. I don&rsquo;t know why I ever married you.&rdquo;

Don was on one of his tears. Just last month he seemed to be doing better, trying harder and treating his wife better, but then things began to tense up. There had been a minor disagreement over a Christmas present, and from that point on, Don had seemed to become angrier and angrier. The man who just a few days before had vowed his love for her now was cursing her and raging at her. This man she loved but feared was almost destroying her.

It was so hard to put it all together. Her pensive look would have given her away if anyone had looked at her closely. Although she was among women who loved her and wanted to include her, she was on an island in her mind, trying to figure out why she felt so crazy.

Maybe you are like Sally. You understand what it means to be caught in the undertow of a relationship that seems to pull you down. Each time there is a lull in the tension, you tell yourself, This time, everything is going to be all right. Yet in a few hours or a few days, you are thrust into confusion again. Often you are blamed for whatever negative circumstances occur, and yet for the life of you you can&rsquo;t figure out why.

Sarah is a woman who was forced to look reality square in the face. &ldquo;My mother can be so much fun and a real friend in tough situations, if she wants to be. She is generous with my kids, and we look forward to her monthly visits.&rdquo;

Sarah tried to love her mother, Mary, but Mary had another side to her that baffled Sarah and everyone else. &ldquo;I guess you could say she has a major blind spot,&rdquo; Sarah explained. &ldquo;Everything will be going along fine, and then something happens to upset Mother. We never know what it will be; we just find out that she&rsquo;s upset. Her anger flares, and she has what my dad always called &lsquo;one of her three-day mad spells.&rsquo;

&ldquo;She&rsquo;s had these so many times throughout my life that I have felt there was no hope. I&rsquo;ve figured that&rsquo;s just the way she is and I just have to live with her spells that throw us all off balance. What bothers me now, however, is that I&rsquo;ve seen her do the same thing to my children. She tells them, &lsquo;If you don&rsquo;t want to come stay with Granny, it&rsquo;s okay,&rsquo; but then she punishes them for not coming. She withdraws, and no one hears from her until she eventually calls. Then everything is fine again&mdash; for a while.&rdquo;

Sarah&rsquo;s eyes filled with tears as she recalled a particularly painful incident with her mother. &ldquo;My daughter had a very rare form of cancer three years ago, when she was eight. Since my mother lives only an hour from us, she volunteered to stay at the house with my son while my husband and I were at the hospital. The afternoon after Mother arrived, she called the hospital room, demanding to know where I &lsquo;hid&rsquo; the mop. She wanted to clean my &lsquo;filthy&rsquo; kitchen floor. Since we were talking to the oncologist about the treatment plan for my daughter, I told Mother I would have to call her back. She insisted that I tell her right then where I put the mop! Sensing by my end of the conversation that she was pushing me, my husband took the phone and said, &lsquo;Mary, we will call you back later. The doctor is here, and we can&rsquo;t talk.&rsquo; Then he just hung up the phone.

&ldquo;When we got home that evening, Mother wasn&rsquo;t speaking. She never asked about her granddaughter but only made an announcement: &lsquo;I am leaving.&rsquo; I was too exhausted from the whole ordeal with my daughter to argue with her, so I just went to the bedroom and closed the door. I heard Mother say one last loud sentence to my husband before the front door slammed. &lsquo;Obviously,&rsquo; she said, &lsquo;my presence isn&rsquo;t needed.&rsquo; I didn&rsquo;t have the energy to stop her, and honestly, I didn&rsquo;t want to try. We had been through episodes like this before. I always found a way to smooth things over, to pack it all away and never mention it again until finally things would return to normal&hellip;if you can call that kind of relationship normal.

&ldquo;About three days later, Mother called and asked about my little girl as if she hadn&rsquo;t even been at our house. I was angry with her, but as usual, I told her what she wanted to hear, and I never brought up the incident again. There have been other incidents since then, and they&rsquo;re really starting to wear me out. My dad tried to reason with her for years about her &lsquo;mad spells,&rsquo; but he might as well have been talking to the wall. She refuses to even admit she has them much less be willing to change. She thinks she is just fine, and if people have a problem with her, well, it&rsquo;s just too bad. They are wrong, and if she&rsquo;s really mad, she calls them &lsquo;stupid&rsquo;!

&ldquo;I love my mother, and I want to be a good daughter. I don&rsquo;t want to be mean or act unchristian, but I just can&rsquo;t stand to walk on eggshells anymore. And I don&rsquo;t want my children to have to either. Something&rsquo;s got to change&hellip;but I&rsquo;m afraid it will never be Mother.&rdquo;

Sarah is describing the kind of complex, crazy-making relationship many of us experience sometime in our lives. Her mother, as generous and fun as she can sometimes be, has more than a blind spot. She has a dangerous character flaw that ensures that anyone who gets close to her will eventually be ensnared by her manipulation. Mary exhibits the behavior of one whom the Bible identifies as a fool. The reality is, relating to her will always involve emotional chaos.

Caring For One Another
Edward T Welch
eBook