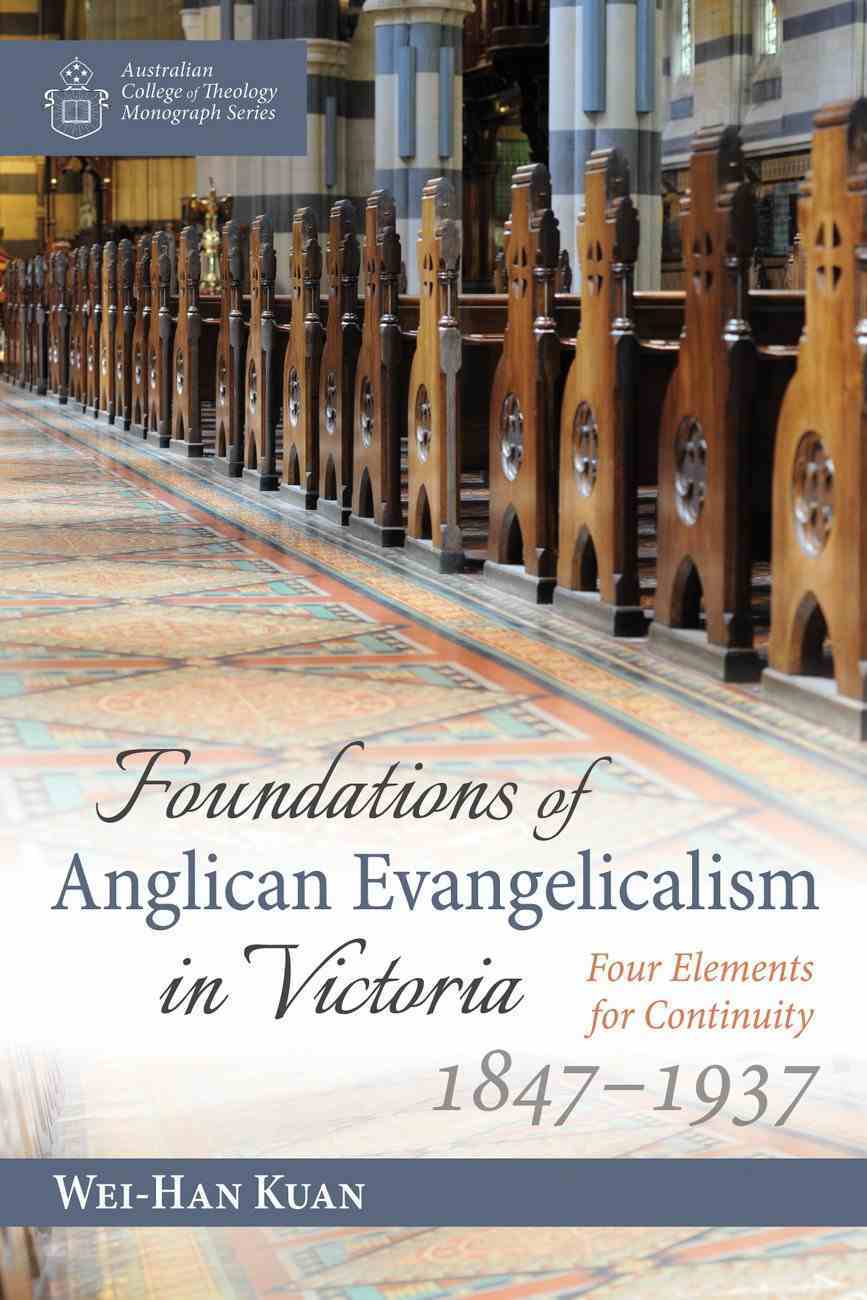 Foundations of Anglican Evangelicalism in Victoria: Four Elements For Continuity 1847-1937

For more than half a century, the Anglican Diocese of Melbourne was unquestionably the most rigorously evangelical and missions-oriented diocese in Australia. The Diocese of Sydney, in that same period, was decidedly broader in theological and liturgical practice. How and...

For more than half a century, the Anglican Diocese of Melbourne was unquestionably the most rigorously evangelical and missions-oriented diocese in Australia. The Diocese of Sydney, in that same period, was decidedly broader in theological and liturgical practice. How and why did Melbourne move in one direction, while Sydney in the other? This study suggests that the answers are to be found in four vital contributors: local churches, evangelical societies, theological colleges, and diocesan bishops. For three broad periods of history between 1847 and 1937, the presence of these four contributors is uncovered, described, and evaluated for the Diocese of Melbourne. Evangelical activism, theological reflection, and leadership are each shown in their contemporary contexts to help us understand how people with gospel passion sought to respond faithfully to their times. This is the question of vision, leadership, and strategy at the heart of this study: ""What makes for long-term evangelical continuity over a hundred-year period?"" ""There is a resurgence of interest in the history of evangelicalism in Australia since European settlement in 1788. One strong element of this history is the significant role of Anglican [Episcopalian] Reformed evangelicalism. While this is often associated with the Diocese of Sydney, it was also present elsewhere. This groundbreaking book tracks the history of this distinctive strand in the history the Diocese of Melbourne. It is well-written, and a valuable, instructive, and perceptive contribution."" --Peter Adam, Vicar-Emeritus of St Jude's Carlton, Former Principal of Ridley College, Melbourne ""To know your story is to understand where you come from and where you are headed. No wonder evangelical Anglicans in Victoria struggle with their identity, because their story is often neglected or entirely misunderstood. Thankfully, Wei-Han Kuan recounts our early history to remind us of those moments when our networks achieved some alignment and our proclamation bore significant fruit. The gospel's advance in Victoria is an extraordinary tale of courage, clarity, and conviction. Read this book and rejoice."" --Rhys Bezzant, Dean of Missional Leadership, Ridley College, Melbourne ""Wei-Han Kuan brings to life the early days of the Diocese of Melbourne and the personalities of its founding fathers in this fascinating history. As well as being an instructive account of the past, it contains many important lessons for today."" --Vaughan Roberts, Rector of St Ebbe's, Oxford and Chairman of the Proclamation Trust ""The roots of Anglican Evangelicalism in Victoria are little known or understood today, but the Evangelical tradition played a seminal role in the early years of the Diocese of Melbourne, and its history needs to be told. This book is a pioneering work in its field and will be required reading for all who are interested in the foundations of the Anglican Church in Australia. The author presents the story with a comprehensiveness and fairness that will put all future researchers in his debt."" --Gerald Bray, Research Professor of Divinity, Beeson Divinity School, Samford University Wei-Han Kuan is the state director of the Church Missionary Society--Victoria, Australia.
-Publisher