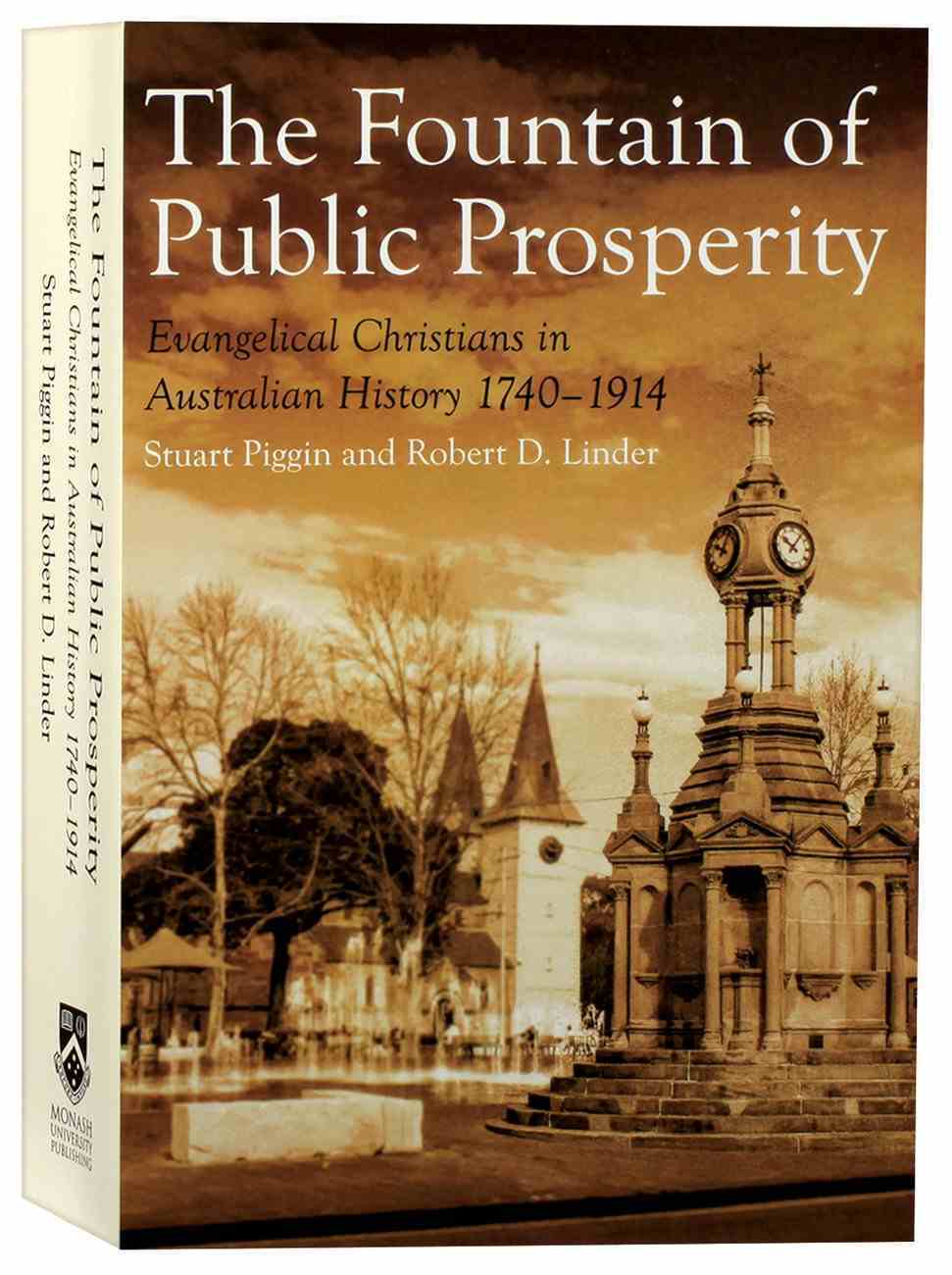 Fountain of Public Prosperity, The: 1740-1914 (#01 in Evangelical Christians In Australian History Series)

This landmark work of scholarship reveals an untold story of our nation: that Evangelical Christianity has profoundly shaped Australia's history, and makes a substantial contribution to the public prosperity of the nation even today. - Koorong Winner...

Post-God Nation: How Religion Fell Off the Radar in Australia - and What It Needs to Get Back on It
Roy Williams
Paperback

This landmark work of scholarship reveals an untold story of our nation: that Evangelical Christianity has profoundly shaped Australia's history, and makes a substantial contribution to the public prosperity of the nation even today.
- Koorong

Winner of the 2019 Australian Christian Book of the Year Award

The official religion brought to Australia with the First Fleet was Evangelical Christianity, the 'vital religion' then shaping public policy through William Wilberforce and his fellow evangelicals. That it has shaped Australian history ever since, making a substantial contribution to the public prosperity of the nation, is an untold story.

Christian values and identity were the main components of Australian values and identity. Evangelical 'moralising' may be understood as a concern to address the 'hard' cultures associated with convicts, the liquor industry, and male misogyny. The movement provided opportunities for women to work in reform, charitable, evangelistic and missionary organisations, thus laying strong foundations for feminism. In their concern for 'Christlike citizenship', evangelicals cared for the nation's children in Sunday schools and its youth in societies for young people such as the YMCA, YWCA, and Christian Endeavour.

The major component of the humanitarian movement, evangelicals ensured that the convict settlement of Australia was more humane than is generally recognised. They did most of the all-too-little that was done to protect the Indigenous population and to educate settlers, keeping alive in the latter a conscience over maltreatment of the former. In a profusion of charities, evangelicals in the nineteenth century, as today, provided most of the welfare for the population's disadvantaged.

The Fountain of Public Prosperity presents propositions which require a radical revision of received understandings, an appreciation of unmined riches in the Australian experience, and reconnection with an often buried past. Drawing on these untapped resources is the safest route to reimagining a future for Australia.

'...this is a very valuable work and should be read by every Catholic historian to balance any isolationism and reliance on the stereotypes that may remain in our approach. It is a veritable lode for mining.' - Michael Belcher, Journal of the Australian Catholic Historical Society

'Stuart Piggin and Bob Linder have produced a monumental history of evangelical Christianity in Australia ... After this landmark book, it will no longer be possible to dismiss or minimise the influence of religion on the rise and development of modern Australia.' - Dr Geoff Treloar, Australian College of Theology

'It resonates significantly with current discussions about the character of our society. It is a masterwork of Australian history.' - Dr Brian Dickey, formerly Flinders University

Stuart Piggin is a Fellow in the School of History, Philosophy and Politics at Macquarie University, and Master at Robert Menzies College.