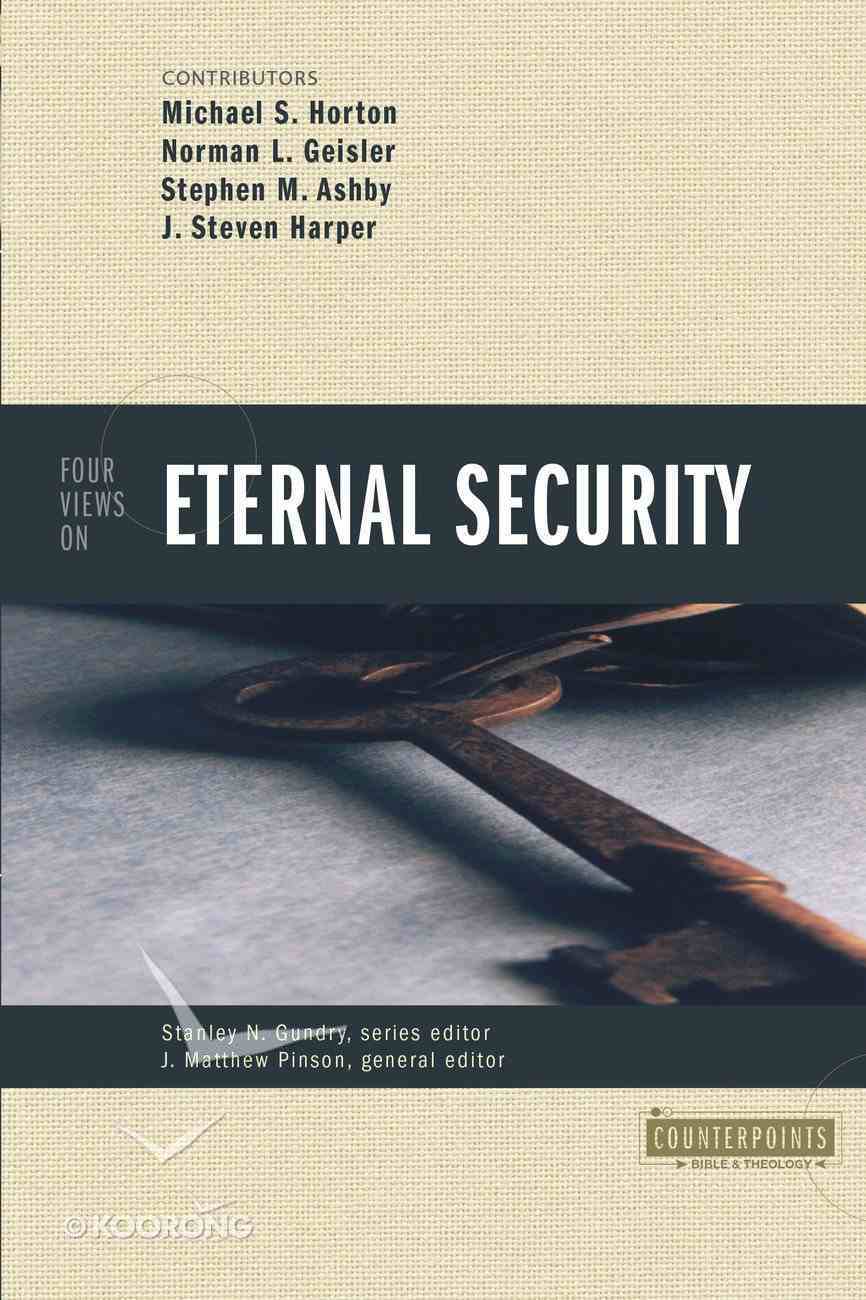 Does the Bible support the concept of "once saved, always saved," or can a person lose his or her salvation? In this book, four writers explain and defend their approaches to perseverance in salvation from the vantagepoint of Classical Calvinism,...

Does the Bible support the concept of "once saved, always saved," or can a person lose his or her salvation? In this book, four writers explain and defend their approaches to perseverance in salvation from the vantagepoint of Classical Calvinism, Moderate Calvinism, Reformed Arminianism, and Wesleyan-Arminianism. Each writer responds to the other views. 304 pages, from Zondervan.

Does the Bible support the concept of once saved, always saved, or can a person lose his or her salvation? How do the Scriptures portray the complex interplay between grace and free will? These and related questions are explored from different angles in this thought-provoking Counterpoints volume.;The contributors each state their case for one of four prominent views on eternal security* classical Calvinist, moderate Calvinist, reformed Armenian, and Wesleyan Armenian. In keeping with the forum approach of the Counterpoints series, each view is first presented by its proponent, then critiqued and defended. This fair and respectful approach allows you to weigh for yourself the strengths and weaknesses of the different doctrinal stances. By furnishing you with scholarly and thoughtful perspectives on the topic of eternal security, this book helps you sift through opposing views to arrive at your own informed conclusions.
-Publisher

A CLASSICAL CALVINIST VIEW Michael S. Horton 'This grace [God] placed 'in Christ in whom we have obtained a lot, being predestined according to the purpose of Him who worketh all things.' And thus as He worketh that we come to Him, so He worketh that we do not depart.' As part of his Predestination of the Saints, Augustine patiently explained and passionately defended the radical graciousness of God in Christ. The recipients of this epistle were two leading monks who had expressed acute anxiety over the debates on these questions in their monasteries. Some feared that the good news was just too good to be true; others were convinced that Scripture itself cautioned against confidence in an already certain and secure salvation. The topic before us has its origins not in Calvin or in the Synod of Dort, nor indeed even in Augustine. It is a perennial question for anyone who wrestles with the Word of God, seeking a unified biblical teaching on the most practical and self-involving question of all: What is the basis for hoping in God's promised salvation? In the brief compass of this chapter, we will argue that covenant theology explains the full range of the biblical witness more consistently than either the Arminian or eternal security positions have done. Many of us who have been reared in evangelical circles know a lot of people who designate themselves Calvinists simply because they believe in eternal security, even if they do not accept total depravity, unconditional election, particular redemption, and irresistible grace. For instance, Norman Geisler identifies himself as a 'Moderate Calvinist,' while his stated positions, most recently in Chosen But Free, largely represent classic Arminianism: 'God's grace works synergistically on free will.... Put in other terms, God's justifying grace works cooperatively, not operatively.' Elsewhere he writes, 'Indeed, God would save all men if He could.... God will achieve the greatest number in heaven that He possibly can. . . . Each creature is free to accept or reject the grace of God in salvation. Of course, God determinately knew from all eternity who would and who would not believe.' Those who actually embrace the so-called five points of Calvinism, however, Geisler repeatedly labels 'extreme Calvinists.' While this approach may be rhetorically effective, it represents a considerable misunderstanding of the historical positions. Those who embrace eternal security are not for that reason Calvinists---even Moderate Calvinists. In fact, eternal security itself is not a Calvinistic doctrine but, at least in the expressions with which I am familiar, rests on Arminian presuppositions concerning grace and free will. If this is the case (as I hope will become more apparent as we progress), then our editor has wisely distinguished the Reformed position on this subject from both Arminian and eternal security perspectives. What, then, is a Calvinistic or Reformed account of the believer's perseverance? We will first examine the passages proponents of the eternal security position use, followed by analysis of those texts Arminians adduce; then we will conclude with the covenantal approach. THE 'ETERNAL SECURITY' PASSAGES Lewis Sperry Chafer introduces his defense of eternal security by referring to the Calvinist-Arminian debate, the former rep-resenting (according to Chafer) the eternal security position. One might assume, therefore, that Chafer identifies himself with Calvinism. But just pages later, in the discussion of election, he writes, 'God chose the plan as a whole, not piecemeal. He knew in advance, before the choice of a plan, who in this plan would be saved and who would not be saved. By faith we must assume that God chose the best possible plan.' He expressly adds that 'election may be seen to proceed from [the] omniscience of God.' How then does Chafer understand the security of the believer? While referring its solidity to the Father's work, the Son's work, and the Spirit's work, he does not refer to election in the first case or to effectual grace in the third. Instead, a some-what mechanical view of salvation emerges, in which Chafer argues that once a person is regenerated (which is the result of human decision), the process cannot be reversed. On one hand, Chafer insists that such security rests on the fact that salvation is God's work from beginning to end. Yet on the other hand, he argues that it rests on the fact that God foreknows human response and responds to human decision by granting new life. Thus, the more consistent Arminian, it seems to me, is perfectly justified in asking how the new birth is irreversible if it rests at least in part on the human will. If we placed ourselves in God's hands, surely we can place ourselves outside of them. Nevertheless, Chafer appeals to many solid proof texts for the security of salvation. John's Gospel is replete with such firm and famous promises: Believers are given 'eternal life' (John 3:16). 'I tell you the truth,' Jesus says, 'whoever hears my word and believes him who sent me has eternal life and will not be condemned; he has crossed over from death to life' (5:24). 'All that the Father gives me will come to me, and whoever comes to me I will never drive away. . . . And this is the will of him who sent me, that I shall lose none of all that he has given me, but raise them up at the last day' (6:37--39). Merely to read Romans 8:29--39 is apparently to lay the whole debate to rest: Sight of the unbroken chain of salvation leads the apostle himself to doxological heights. That God is able to keep believers is defended from John 10:29; Romans 4:21; 8:31, 38--39; 14:4; Ephesians 1:19-- 21; 3:20; Philippians 3:21; 2 Timothy 1:12; Hebrews 7:25; Jude 24.