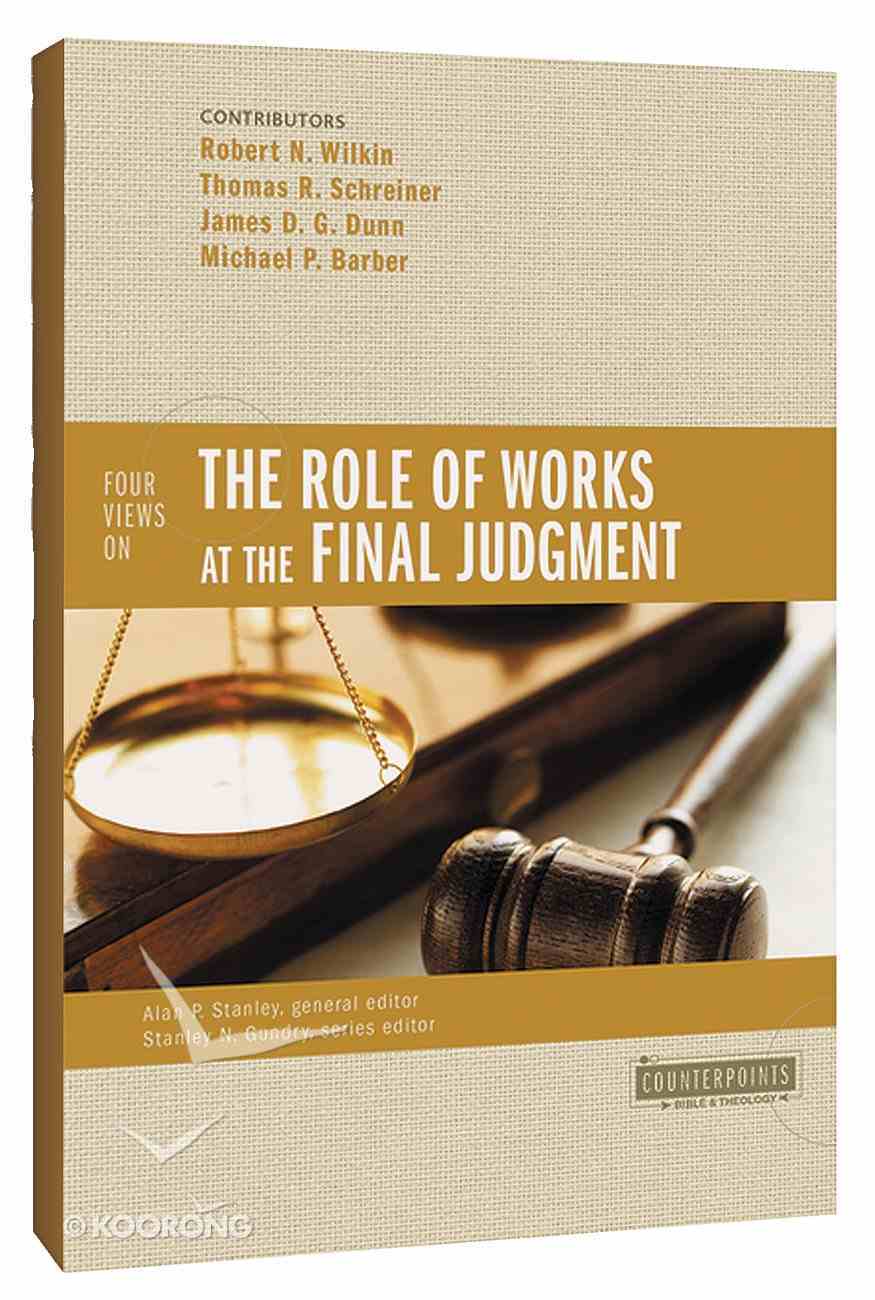 Through a discussion of Biblical texts, this book presents four perspectives on the role of works at the final judgment including: Robert N. Wilkin: Works will determine rewards but not salvation: At the Judgment Seat of Christ each believer will...

Through a discussion of Biblical texts, this book presents four perspectives on the role of works at the final judgment including: Robert N. Wilkin: Works will determine rewards but not salvation: At the Judgment Seat of Christ each believer will be judged by Christ to determine his eternal rewards, but he remains eternally secure even if the judgment reveals he failed to persevere in good works (or in faith). Thomas R. Schreiner: Works will provide evidence that one actually has been saved: At the final judgment works provide the necessary condition, though not the ground for final salvation, in that they provide evidence as to whether one has actually trusted in Jesus Christ. James D. G. Dunn: Works will provide the criterion by which Christ will determine eternal destiny of his people: Since Paul, Jesus, and the New Testament writers hold together 'justification by faith and not by works' with 'judgment according to works', we should not fall into the trap of playing one off against the other or blend them in a way that diminishes the force of each. Michael P. Barber: Works will merit eternal life: At the final judgment, good works will be rewarded with eternal salvation. However, these good works will be meritorious not apart from Christ but precisely because of the union of the believer with him.
-Publisher

Sir Michael Barber is the Founding Director of the US Education Delivery Institute, which is designed explicitly tohelp U.S. state education systems strengthen their capacity to deliver results. The US Education Delivery Institute is unique among U.S. nonprofits in that it focuses on exclusively on how to get things done, rather than what to do. Barber is an Expert Partner in McKinsey and Company s Global Public Sector Practice and head of its Global Education Practice. He works on major challenges of performance, organization, and reform in government and the public services, especially educa

Alan Stanley received his ThM and PhD in New Testament from Dallas Theological Seminary. In 2003, he moved to Sunshine Coast, Queensland, Australia where he is a pastor and teaches in Old and New Testament at Mueller College of Ministries.

Thomas R. Schreiner is the James Buchanan Harrison Professor of New Testament Interpretation and Professor of Biblical Theology at the Southern Baptist Theological Seminary, Louisville, KY. He serves as Associated Dean of the School of Theology.
Dr. Schreiner joined the Southern faculty in 1997 after serving 11 years on the faculty at Bethel Theological Seminary. He also taught New Testament at Azusa Pacific University. Dr. Schreiner, a Pauline scholar, is the author or editor of several books including, Romans, in the Baker Exegetical Commentary Serieson the New Testament; Interpreting the Pauline Epistles; The Law and Its Fulfillment: A Pauline Theology of Law; The Race Set Before Us: A Biblical Theology of Perseverance and Assurance; Still Sovereign: Contemporary Perspectives of Election, Foreknowledge, and Grace, co-edited with Bruce A. Ware; Women in the Church: A Fresh Analysis of I Timothy 2:9-15; Paul, Apostle of God's Glory in Christ: A Pauline Theology, 1 and 2 Peter, Jude.
Dr. Schreiner was educated at Western Oregon University (B.S.) Western Conservative Baptist Seminary (M.Div.; Th.M.), and Fuller Theological Seminary (Ph.D.).

James D G Dunn (Ph.D., Cambridge, D.D.) is Lightfoot Professor Emeritus of Divinity in the University of Durham, England. He is the author of numerous books on the New Testament, including several important commentaries on various epistles of Paul, Romans 1-8, Romans 9-16 (Word Biblical Commentary, 2 vols.), Galatians (Black's New Testament Commentaries), and Colossians and Philemon (New International Greek Testament Commentary) and Christian Liberty: A New Testament Perspective (with Alan M. Suggate), The Justice of God: A Fresh Look at the Old Doctrine of Justification by Faith. His expertise on oral transmission is captured in the two volumes Jesus Remembered: Christianity in the Making, Volume 1 and Beginning from Jerusalem: Christianity in the Making, Volume 2 .

The Heritage of Anglican Theology
J I Packer
Hardback