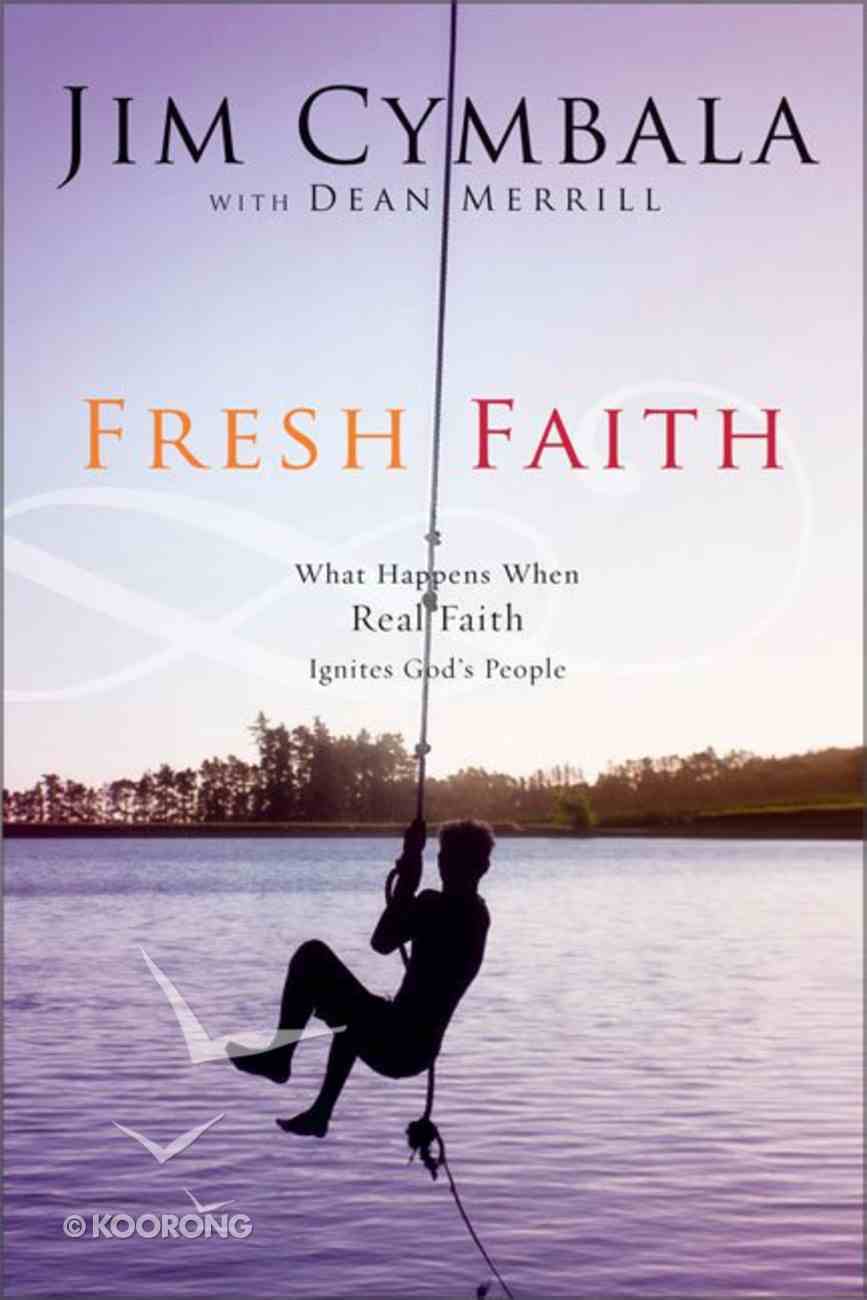 Like a Fountain of Clear Water Cleansing a Stagnant, Cynical Culture . . .FRESH FAITHPastor Jim Cymbala calls us back to a fiery, passionate preoccupation with God that will restore what the enemy has stolen from us: our first love...

Like a Fountain of Clear Water Cleansing a Stagnant, Cynical Culture . . .FRESH FAITHPastor Jim Cymbala calls us back to a fiery, passionate preoccupation with God that will restore what the enemy has stolen from us: our first love for Jesus, our zeal, our troubled children, our wounded marriages, our broken and divided churches.Born out of the heart and soul of The Brooklyn Tabernacle, the message of Fresh Faith is illustrated by true stories of men and women whose lives have been changed through the power of faith.The same faith that can transform your life--starting today, if you choose.
-Publisher

Fresh Faith will restore your faith in the promises of God and revitalize your relationship with him. This softcover edition includes a study guide.
-Publisher

Pastor Jim Cymbala calls us back to a fiery, passionate preoccupation with God that will restore what the enemy has stolen from us: our first love for Jesus, our zeal, our troubled children, our wounded marriages, our broken and divided churches.Born out of the heart and soul of The Brooklyn Tabernacle, the message of Fresh Faith is illustrated by true stories of men and women whose lives have been changed through the power of faith. Cymbala writes, 'Real faith is produced when our hearts draw near to God himself and receive his promises deep within.'That kind of faith can transform your life---starting today, if you choose.'Jim Cymbala is an exciting reminder of God's desire to bless and use any faithful and trusting follower of our Lord in supernatural ways.'---Dr. Bill Bright, Founder and President, Campus Crusade for Christ International
-Publisher

Chapter One Stolen Property I live in a city where things get stolen all the time. Along Flatbush Avenue, where our church is, car thefts are an everyday occurrence. So are muggings, purse snatchings, and apartment break-ins. Once in a Sunday night sermon I made the mistake of asking our congregation to raise their hands if they had personally experienced some kind of rip-off. The place broke into laughter as 98 percent of the hands went up. What a silly question to pose to a crowd of New Yorkers! My wife, Carol, and I live in the borough of Queens, east of LaGuardia Airport and Shea Stadium, where the Mets play. I came out to my car parked in front of our house one morning a few years ago and noticed it had been vandalized. As soon as I opened the door and got inside, I saw a huge, gaping hole in the center of the steering wheel where the air bag had been. Crack cocaine addicts love air bags because they are a quick-sale item. Within minutes they can walk into a 'chop shop' --- an illicit garage that deals in used auto parts --- and trade an air bag for up to $200 cash. It is just one of the ways that crack has devastated New York and other major cities in America. Heroin was one thing, snorting cocaine another --- but crack has brought massive destruction. I moaned to myself about the loss. When I called my insurance agent, he took it in stride. 'Well, that's the Big Apple for you,' he said. 'Happens all the time.' We filled out the claims paperwork and ordered the part from the dealer. I didn't ask what this would do to my rates next time around; I didn't really want to know. A few months passed before I finally got around to taking the car in for the replacement. At last the damage was repaired. And wouldn't you know --- within three weeks I got ripped off again! Same parking place in front of my house, same window forced open. I'm almost sure it was the same thief. This time I didn't even bother to file an insurance claim. I just paid the $800 for replacement out of my pocket rather than risk my rates going through the roof. I even found a way to joke about it with someone: 'You know, maybe I should leave coffee and cake for this guy on the front seat . . . with a note that says, 'Hey, let's be friends! If I'd just supply you with other stuff to sell, at least you wouldn't have to break into my car every few months.' ' More Than Merchandise Fortunately, air bags can be replaced. As much as you hate the loss and inconvenience, you gradually go on with your life. A year later, you won't even remember that it happened. But in the spiritual realm, a kind of stealing is going on in many lives that is much more serious. Satan is in the business of ripping off things far more important than an air bag. That is his nature. As Jesus said in John 10:10, 'The thief comes only to steal and kill and destroy.' Satan obviously doesn't want car parts. Nor does he want your house; he doesn't live in a house. He doesn't need your vehicle, for he has other modes of transportation. He has no interest in your clothes; he's a spirit being. He doesn't care about your investments; what would money mean to him? In the spiritual realm, a kind of stealing is going on in many lives. Satan is in the business of ripping us off. But he is very interested in stealing spiritual treasures --- things that have value with God and are of eternal significance. Take, for example, our very purpose for living. Satan loves snatching men and women on the streets of my city and your city --- people who have potential --- and turning them into glassy-eyed wanderers through life, with no goal from day to day. They lie in bed at night staring at the ceiling, saying, 'What's the point? Just to make money? Just to have kids? Why?' People turn to drugs and alcohol because they don't have a clue as to why they're alive. Others turn to career achievement, or pleasure, or materialism . . . something, anything to fill the void. But it doesn't work. God created them to worship and enjoy him forever, but this awareness has been stolen from their consciousness. Notice the progression in John 10:10. Satan's first move is just petty larceny. Once he manages that, he can move on to actual killing, and from there to mass destruction. 'Steal . . . kill . . . destroy.' But it all starts with stealing. What Happened to 'First Love'? Even among those who are Christians, the devil has a strategy of theft. For example, as a pastor I have seen over and over the tragic loss of our 'first love' for Jesus. There was a time in our lives when we loved Jesus so much more than we do today. Our appetite for God's Word was voracious. Our love for God's house was enthusiastic. Our eagerness for spreading the gospel was so strong. . . . Now, how is it? Yes, we still love the Lord. We still come to church. But what happened to all that energy and passion? That is the problem Jesus addressed with the Ephesian church in Revelation 2:2 -- 5: 'I know your deeds, your hard work and your perseverance. . . . Yet I hold this against you: You have forsaken your first love. Remember the height from which you have fallen! Repent and do the things you did at first. If you do not repent, I will come to you and remove your lampstand from its place.' Where does 'first love' go? Our zeal and our intensity don't evaporate. Satan steals the hot embers of devotion and consecration. We get ripped off.