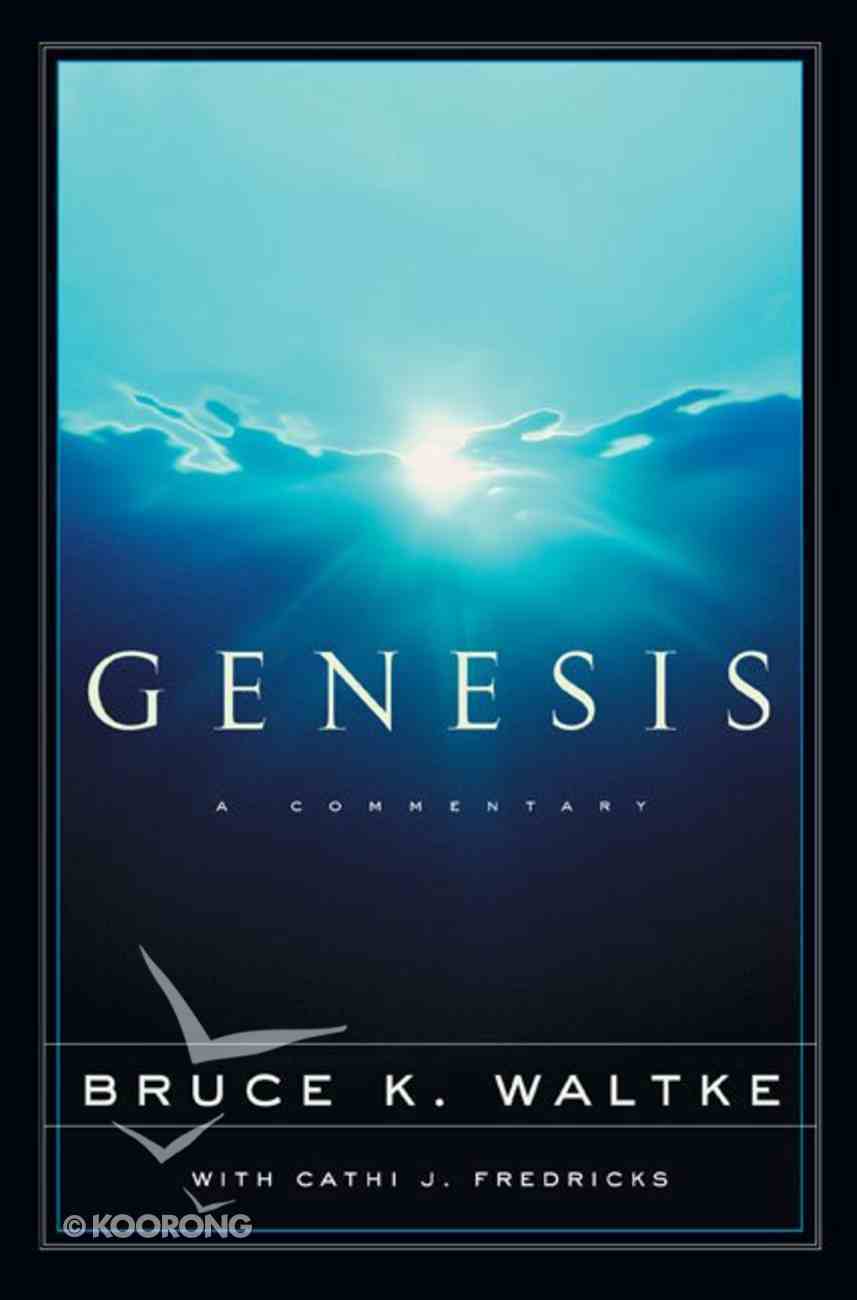 This landmark commentary marshals the vast experience and brilliant insights of one of today's most revered Old Testament scholars. Exploring Genesis as "theological literature", Waltke strikes an unusual balance by emphasising the theology of the Scripture text while also paying...

This landmark commentary marshals the vast experience and brilliant insights of one of today's most revered Old Testament scholars. Exploring Genesis as "theological literature", Waltke strikes an unusual balance by emphasising the theology of the Scripture text while also paying particular attention to the flow and development of the plot and literary techniques that shape the message of the "book of beginnings".

This landmark commentary marshals the vast experience and brilliant insights of one of today's most revered Old Testament scholars. To those familiar with the work of Bruce K. Waltke, the significance and value of Genesis will be instantly apparent. Others who are unfamiliar with Waltke have only to read the first few chapters to understand why he has earned the reputation of a scholar's scholar, and why this masterful volume stands like a monolith among Old Testament commentaries.Exploring the first book of the Bible as "theological literature," Waltke illuminates its meanings and methods for the pastor, scholar, teacher, student, and Bible-lover. Genesis strikes an unusual balance by emphasizing the theology of the Scripture text while also paying particular attention to the flow and development of the plot and literary techniques--inclusion, irony, chiasm, and concentric patterning--that shape the message of the "book of beginnings."GenesisModels the way to read and interpret the n
-Publisher

The Gold Medallion winning commentary by one of the leading Old Testament evangelical scholars that explores Genesis with the academic integrity you expect from a conservative commentary, but in an approachable style that addresses the text as 'theological literature.'
-Publisher

Cathi Fredricks (MCS, Regent College) lives in London, where she is an executive assistant at the International Fellowship of Evangelical Students.

Bruce K. Waltke (Th.D., Dallas Theological Seminary; PhD., Harvard Divinity School) is acknowledged to be one of the outstanding contemporary Old Testament scholars. He is professor of Old Testament at Reformed Theological Seminary in Orlando, Florida, and Professor Emeritus of biblical studies at Regent College in Vancouver.
He has authored and co-authored numerous books, commentaries, and articles, and contributed to dictionaries and encyclopedias.


His most recent works are An Old Testament Theology; Proverbs 1-15, Proverbs 16-31 (New International Commentary on the Old Testament) and major commentaries on Genesis and Micah. On a popular level he has written Finding the Will of God: A Pagan Notion? and The Psalms: A Devotional Commentary.
Koorong -Editorial Review.

CHAPTER ONE BOOK 1 The Account of the Heavens and the Earth (2:4--4:26) THEME OF BOOK 1 The perspective now shifts from God as sole actor to humanity as reactor. The subtle change from 'the heavens and the earth' (1:1) to 'the earth and the heavens' (2:4b) may point to the shift in perspective. The account of the heavens and the earth records the drastic change from the pristine 'very good' creation to the harsh realities now experienced outside the temple-garden. Through the Fall, sin and death enter the human race and the earth becomes cursed. Both humanity and the earth are in need of redemption. In the historical event of the Fall, Adam and Eve function as archetypes for humanity's disobedience. The priestly guardians of the sanctuary are tested for their fidelity to their King. Obedience entitles them to life with God (cf. Deut. 30:15--20). Failure points to their need for justification and sanctification through the covenant of redemption established with and through Jesus Christ. OUTLINE OF BOOK 1 Superscription 2:4a Act 1: Humanity on probation 2:4b--25 Scene 1: Man on probation, 2:4b--17 Scene 2: Gift of the bride, 2:18--23 Epilogue, 2:24--25 Act 2: The Fall and its consequences 3:1--24 Scene 1: The Fall, 3:1--7 Scene 2: The shape of judgment, 3:8--19 Epilogue, 3:20--24 Act 3: Escalation of sin in the line of Cain 4:1--24 Scene 1: Cain and Abel, 4:1--16 Scene 2: Lamech, 4:17--24 Epilogue (Transition to Book 2) 4:25--26 LITERARY ANALYSIS OF BOOK 1 Genre Like the creation account, the account of the heavens and the earth has historical solidity. The story is based on events in time and space, a real Adam and Eve. But it is not merely a historical account. The style is artistic and figurative rather than scientific and literalistic. The scenes of creation are painted as an artist might envision them: God, as a potter, forming the man; as a gardener, designing a garden of beauty and abundance; and as a temple builder, raising the woman from the rib of the man. The suprahistorical dimension is also essential for the theology of this account. On this register, Adam and Eve represent every man and woman (Gen. 3:16--19; cf. 2:24; Matt. 19:4--6; Rom. 5:12).4 They represent our own rebellion, fallenness, and need for God's graceful redemption. This is as important as the historical dimension. Therefore, both the historical and the suprahistorical should be held in proper tension. Structure and Plot In contrast to the static and balanced report of creation in the prologue, the account of the heavens and the earth unfolds like a drama with all the elements of scenic depiction, contrast, conflict, and climax. This is a drama of three acts opening with paradise, falling to despair, and resolving with a seed of hope. Each act opens with a setting and concludes with a poem (which captures the theme of the act), followed by an epilogue (cf. 2:23 with 24--25; 3:14--19 with 20--24; 4:23--24 with 25--26). The first act begins with Adam in a paradisiacal garden separated from the rest of creation. The garden is a temple, and its priest is the man with the woman to help him. Scene 1 features vegetation, which has a prominent role in the probation. Scene 2 presents the animals, which are important to the 'gift of the bride.' The poem concluding this act celebrates God's gift of a wife. The second act begins with the crafty serpent. Against the backdrop of the same lush and holy garden, humanity forfeits its priestly role. Plants and animals together have important roles in this moment of decision for the protagonists. The act concludes with a poem of judgment and salvation. The third act begins outside the garden with the woman giving birth. The setting outside of the paradisiacal garden conveys humanity's failure, but Eve's childbirth conveys God's grace and the hope that remains. The concluding poem of this act, Lamech's song of revenge, forcefully depicts humanity's escalating sin and violence. The first two acts are closely related by a chiasm: A Creation of man: his happy relationship with the earth and his home in the garden, where he has freely growing food and access to the tree of life (2:4--17) B Creation of woman: her happy relationship with man (2:18--25) C Conversation of serpent with woman: his tempting of her (3:1--5) X The sin and God's uncovering of it (3:6--13) C' Punishment of serpent: its spoiled relationship with woman (3:14--15) B' Punishment of woman: her spoiled relationship with man (3:16) A' Punishment of man: his spoiled relationship with the earth and expulsion from his home in the garden; he now has to toil to secure food and will no longer have access to the tree of life (3:17--24). This analysis exposes the crucial moment as Adam and Eve's choice to eat the forbidden fruit. The chiasm may justify combining acts 1 and 2 into one act: 'the expulsion of man from the Garden.' Escalation The acts display humanity's worsening situation. The serpent tempts Adam and Eve to sin, but Cain sins after God encourages him to do what is right. Adam and Eve eat the forbidden fruit, but Cain murders his brother, fears being killed and his offspring repeatedly kill in unbridled revenge and debase God's ideal for marriage by polygamy. Not surprisingly, Cain's punishment is more severe than Adam's. According to Dorsey, 'Adam is... * driven from the garden, to settle in a new home east of Eden * forced to till the soil to get food * separated from the source of perpetual life (the tree of life),while Cain is... * driven out, doomed to wander forever with no permanent home * not even able to till the soil for his food * hounded by death (would-be killers) wherever he goes.'

The Genesis Record: A Scientific and Devotional Commentary on the Book of Beginnings
Henry M Morris
Paperback