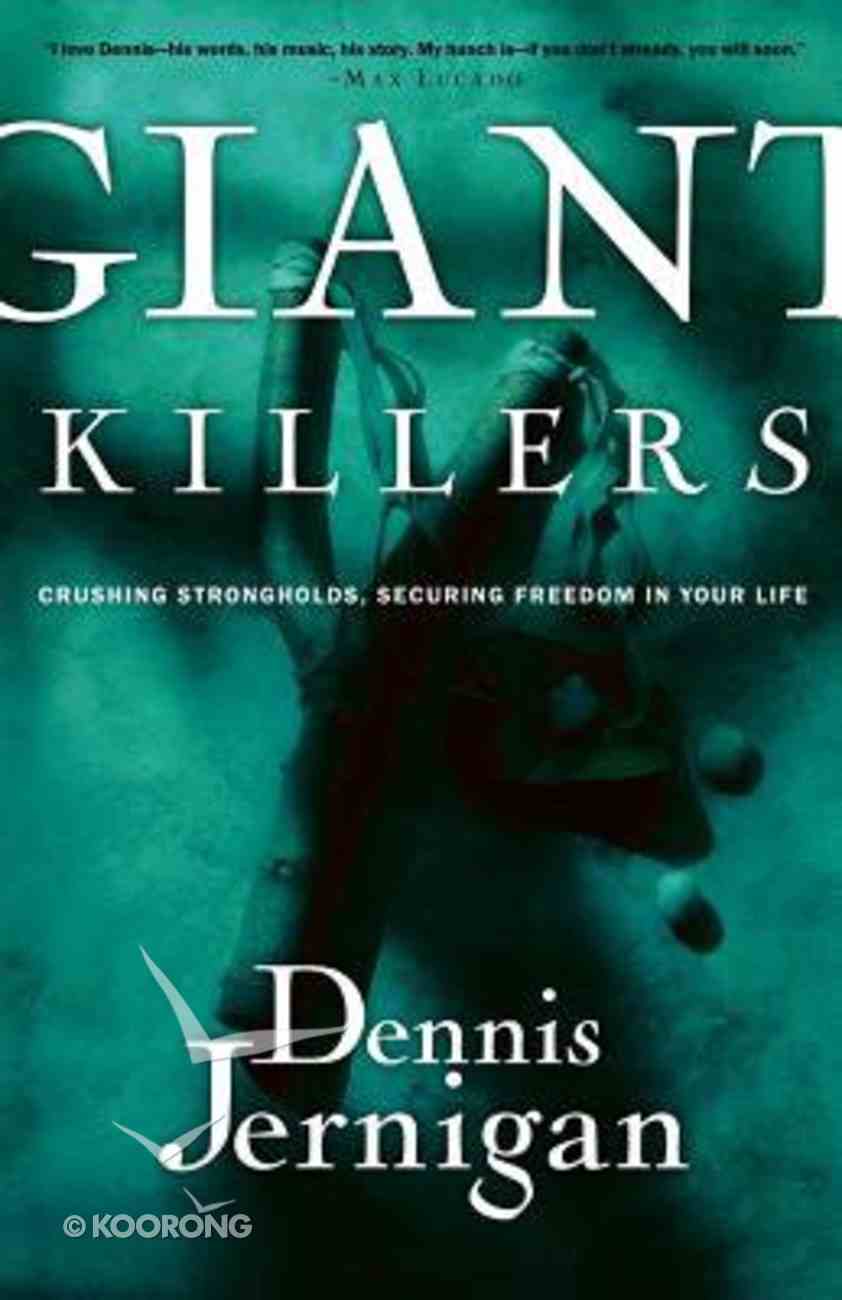 "David, aiming his sling at the towering Goliath, set the pattern for every one of us," writes worship leader and author Dennis Jernigan in his book, Giant Killers . Many already know Jernigan's story. For others, this will be their...

Lord, I Want to Be Whole (Workbook And Journal)
Stormie Omartian
Paperback

Broken By Fear, Anchored in Hope: Faithfulness in An Age of Anxiety
Rob Merchant
Paperback

Grace For Amateurs: Field Notes on a Journey Back to Faith
Lily Burana
Hardback

Anxious For Nothing: Finding Calm in a Chaotic World
Max Lucado
Hardback

The Journey Out: How I Followed Jesus Away From Gay
Ken Williams
Paperback

"David, aiming his sling at the towering Goliath, set the pattern for every one of us," writes worship leader and author Dennis Jernigan in his book, Giant Killers. Many already know Jernigan's story. For others, this will be their first encounter with one of the most prolific worship leaders of our time. Written by someone who, through the Holy Spirit's power, has enjoyed success over a very big giant in his life, Giant Killers boldly proclaims that all giants in believers' lives are dangerous and must be defeated and that Christ makes that possible.

^Worship leader Dennis Jernigan opens his heart to help you overcome the persistent problems in your life. ^Persistent sins. Troublesome fears. Powerful addictions. Is there any hope of overcoming these giants that keep us from experiencing God's freedom? ^Dennis Jernigan enthusiastically answers, "Yes." And he shares his personal story to show how God has helped him overcome the giants in his life. ^In "Giant Killers" you'll meet Goliath and other giants in the Bible that represent overwhelming problems that plague everyone-fear, discouragement, shame, and more. And you'll discover five God-given "stones" that, when fired from a sling, are sure to fell these giants. ^Having overcome homosexuality-a behavior pattern many consider unchangeable-Dennis Jernigan speaks with authority on the subject of defeating spiritual enemies. Through his inspiring devotional approach, you'll draw closer to God, the source of all power for victory.
-Publisher

Dennis Jernigan is one of the most popular and prolific worship leaders of our time, having written more than 2,200 songs, including "You Are My All in All" and "Hands Lifted High." Dennis and his wife, Melinda, along with their nine children, live in Muskogee, Oklahoma, where they serve at New Community Church.

Believing a Lie
You read about them in the pages of Scripture. You learn their stories in biographies of great Christians. And if you are like me, you have been privileged to know some of them personally. They are giant killers, men and women armed only (only–ha!) with faith in an almighty God and who have, in boldness, brought down the spiritual foes in their lives.

Some have felled sin, once looming tall and solid as Colossus. Some have quelled an anxiety that troubled their souls like gales upon the water. Others have “done in” doubt, despair, or even the fear of death, our last enemy. What heroes, these! What heroines!

The stories of many of these giant killers will continue to be retold for generations to come, so thrilling are they. You may have your own stories of defeating the giants in your life, even if another behemoth stands before you now, and those stories mean so much to you. Every story of giant killing is valuable; every one inspiring, every one instructive.

Let me now tell you my own story of defeating a giant. My giant may be different from yours. Surely the way in which it grew in my life and the way in which God enabled me to defeat it are different from what you have experienced or will experience in giant killing.
But I trust that as you hear my story, God will be at work in your heart, filling you with the confidence that you can overcome the giant challenging you now.

I was born in Sapulpa, Oklahoma. Soon after my birth, my parents moved to the farm my grandparents Samuel Washington Jernigan and Myrtle Mae Snyder had built–the farm where my father was raised. We lived three miles from the small town of Boynton, Oklahoma (population four hundred), where my brothers and I attended school.

The Lord gifted me from an early age to play the piano. By the time I was nine, I was playing for the worship times at First Baptist Church. This was also the church my grandfather Herman Everett Johnson had pastored. This was the church where my parents, Samuel
Robert Jernigan and Peggy Yvonne Johnson, had met. My father had
also “led singin’ ” there from the earliest I can remember (as he still
does today).

When I was six or seven years old, my Grandmother Jernigan moved back to the farm, living in a trailer next to our farmhouse. Each day after school I could be found at my grandmother’s house practicing piano (and conveniently forgetting about my chores). My grandma taught me how to play by ear and how to “chord” for “church playin’.” She was always kind and supportive of me.

By contrast, over in the Jernigan household, we were not an affectionate family. While I did feel affection from my mother, I never remember receiving physical affection from my father or my brothers. In part, this was how families tended to act back then. And in part, the emotional distance was due to my daddy’s working so hard. In addition to working the farm, he was employed by a utility company and worked as a mechanic for many years.

Since I have gotten older, God has reminded me of many ways my father expressed affection and love for me as I was growing up. My problem was not my father; my problem was that I believed a lie. Once Satan got his foot in the door of my heart, I perceived any rejecttion–no matter how big or small–as a lack of love from my dad (or whomever I thought was rejecting me at the time).

While from an early age I felt worthless, I discovered something: If I performed well, people would like me. So I tried to be the best in whatever I did, including schoolwork, basketball, and music. In the process I became a selfish person, usually at the expense of others.

It wasn’t long, however, before I became frustrated, because no matter how well I performed, it never seemed to be good enough. What people thought was good–my outward performance–hid the deep hurts and failures of my heart. (And I must add that my daddy and mama never missed a single event I was involved in while growing up. This should have revealed a lot to me about their love.)

Now I need to tell you about the most painful part of my life, a part I long tried to hide. I allowed a sense of rejection to permeate every aspect of my life. (What I didn’t realize was that Satan was lying to me, trying to keep me from God’s plan for my life.) This included the sexual aspect of my life.

As a boy I needed a role model to show me the way to manhood. But because I felt rejected by the main man in my life, my father, I began to yearn for intimacy with other men in perverse ways. I remember having feelings of attraction toward the same gender from an early age. I hid this from others as best I could through my school and college years.

I attended Oklahoma Baptist University, and I look back on my four years there with fondness. Because of my lack of musical training while growing up, my musical studies at OBU were like learning a whole new language. But despite all the good that happened during those college years, that was also a time when I was secretly involved in homosexuality and was filled with confusion.

Being a young man in need of male affirmation, I was overwhelmed when an older man I respected began paying attention to me near the end of my time at college. As a “Christian,” he said that he approached me from an attitude of caring about my well-being. To have someone like this call and ask how things were going for me made my life more bearable.

After many weeks of going out for a soda or simply riding around town and having him ask me how he could pray for me, I grew to trust this person immensely–so much so that I came to the point of asking him if I could share my deepest secret. I unloaded my burden about my sexual identity and immediately felt the weight lift from my shoulders. It felt wonderful!

The sense of lightness lasted only for moments. It came to an end when I realized this person was making a sexual advance toward me. And in those next few minutes, I felt utter despair as I gave up hope of ever getting help for my problem. I came away from that encounter feeling so used and worthless that I decided to take my own life. I wanted peace more than I wanted to live. So I went home, turned on the gas stove, and lay down to die.

While thinking about how this outcome would be better for me as well as for my family and friends, my thoughts were interrupted by
questions like What is eternity really like? and Am I ready for what’s out there? I could not go on with the suicide. I got up from the floor, turned off the gas, and decided to live as I was obviously created to be–as a homosexual.

For the rest of the summer after my graduation, I traveled with a group promoting the university, and I lived in perverted relationship with another man. I thought I knew misery before, but this summer proved even more painful. I had given myself to what I perceived as my true identity and became more miserable than ever.

What was I going to do? Sometimes I thought I should go back to my plan of suicide. Other times, being a good Baptist boy, I decided that I should give God every opportunity to heal me. To me,that meant I should go to seminary. Yes, in my mind, it was either suicide
or seminary!

But God had other plans.

A Look Inside
1. What is the giant in my life?
2. Who provides a good role model for me as a giant killer? Why?
3. As I read the story of the growth of the giant in Dennis’s life
(even though his giant may be very different from mine), what
does it suggest to me about the origins of my own giant?

“Even in Their Sleep…”
Tonight, spend some time thinking about your own life story as it has
played out up to this point. As you do so, ask God to give you insights
that will help you better understand–and heal from–whatever
damage you may have in your life.

When Loving Him is Hurting You
David Hawkins
eBook

It's Not How You Look, It's What You See
Lisa Bevere
Hardback