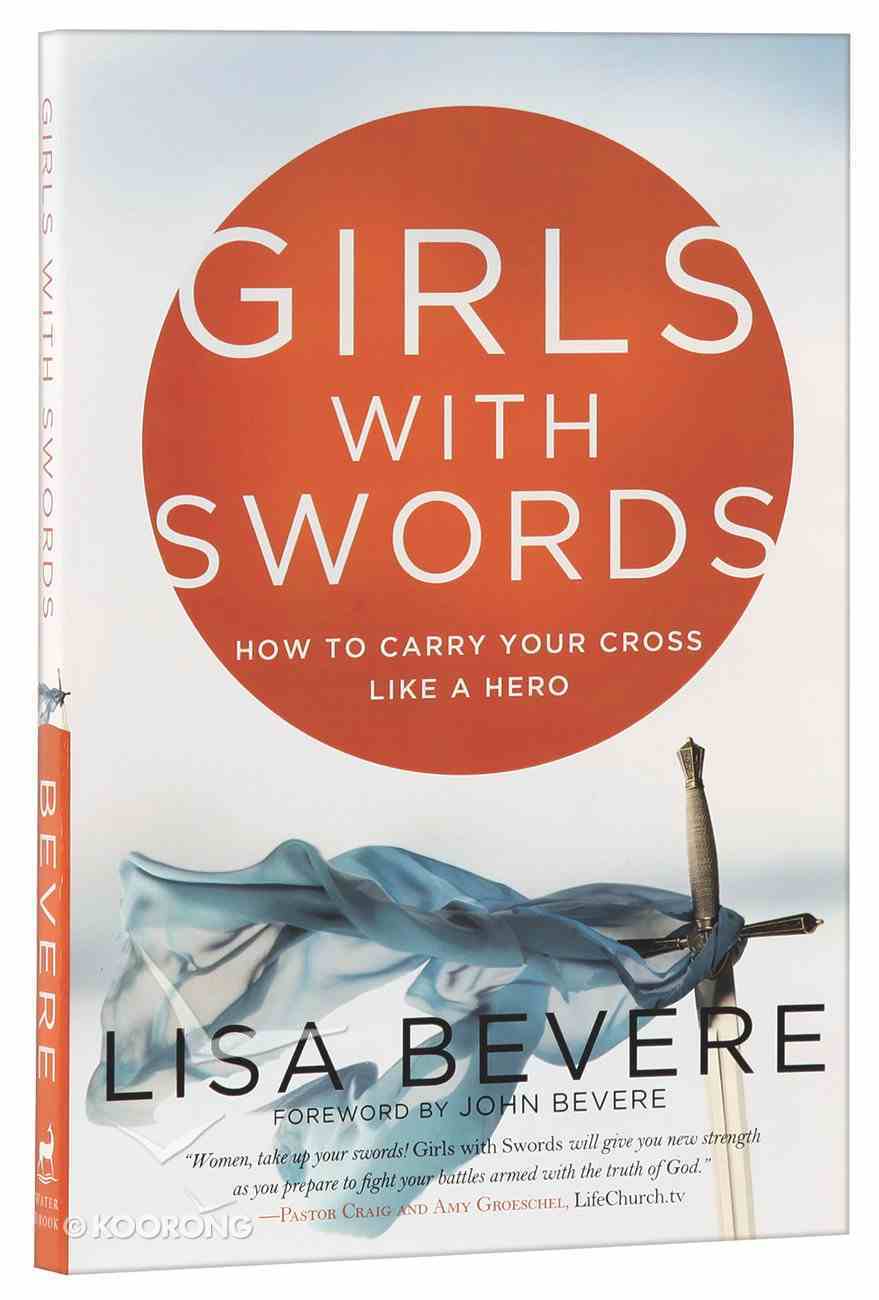 Girls With Swords: How to Carry Your Cross Like a Hero

In this stirring call to arms, Lisa Bevere explains how Christian women are involved in an epic battle in which the stakes are infinitely high - nothing less than eternity! This book helps women to move from simply studying God's...

Godmothers: Why You Need One. How to Be One.
Lisa Bevere
Hardback

In this stirring call to arms, Lisa Bevere explains how Christian women are involved in an epic battle in which the stakes are infinitely high - nothing less than eternity! This book helps women to move from simply studying God's Word to wielding it as a weapon against a relentless spiritual enemy.

What if you discovered you have been entrusted with an invisible, invincible, and incorruptible weapon? Would you use it?  Move beyond only study and begin to wield the Word of God!

“If you don’t have a sword, sell your cloak and buy one!”
—Jesus

If there ever was a time for women to be armed, it’s now.

Yet the Word of God is a sword we often are more comfortable studying than wielding. It’s time we give girls swords and watch them connect heaven to earth. Worldwide, women are the targets of prejudice, sex trafficking, abuse, and even gendercide. Lisa Bevere writes that these attacks say more about who women might be in the future than who they have been in the past. In Girls with Swords she explains a spiritual enemy is seeking to disarm women on every level. It’s time women become the heroes God created them to be and stand—courageous, discerning, forgiving, and wise.

Creatively forging the imagery of swords, the Word of God, and the Cross, Girls with Swords  will teach you:

It’s time to take up your sword and be a hero.
-Publisher

You Are a Target

Christianity is a battle, not a dream.
—Wendell Phillips

In a world already overrun by violence, you may wonder why I would suggest that women of all ages take up arms and join the fight. As you turn these pages, I hope you will discover the many reasons why there is no neutral territory. We do not live by the violence of a sword, but the time has come to live by the power of one.

The first reason you need a sword is that, whether you realize it or not, you are part of an epic battle, and God does not want his daughters unarmed or caught unaware.

The poignant need for addressing these issues head-on was brought home in an unexpected way. It was early June in the summer of 2010, and I had just returned home from traveling and speaking in five different countries in the short span of four weeks. Mind you, these were not nations clustered together, so traveling meant  crossing date lines, exchanging night for day, and bouncing between the northern and southern hemispheres.

Overcome by a persistent strain of jet lag, I was wandering a bit dazed through my second evening home when I realized I was alone with my youngest son, Arden. As I approached him, he patted the sofa and invited me to join him in watching a movie. Thrilled to have a chance to perhaps cuddle with my son, I settled myself in as close as possible and asked, “What are we watching?”

“The Terminator,” he answered.

Okay, before you react, stay with me. I am not endorsing the movie, nor am I suggesting that you watch it. I saw an edited TV version, and even then it was eighties awful! But amid the ridiculous hair, disjointed music, and bad acting, I found something valuable I want to share here, because it perfectly sets up the why behind the journey of this book. In case you’re not familiar with The Terminator, allow me to paint a vastly shortened version of the movie for you. It is the story of Sarah Connor, a moped-riding waitress who is living a boring, mundane life in the hope that one day love will find her. Every twenty-four hours plays out pretty much the same. By day she serves pie and coffee; by night she hopes that one of her blind dates will turn into Prince Charming. By day she works, and by night she waits.

This predictable 1980s pattern is radically interrupted when a robotic assassin from her future shows up. Our hero, Sarah, first learns she might be at risk when she is taking a break at work and realizes a number of women who share her full name have turned up dead.

Apparently the terminator, a.k.a. Arnold Schwarzenegger—actor, former governor of California, and ex-husband of Maria Shriver—has time traveled, and anyone bearing the name Sarah Connor is his target.

There seems to be no way this cyborg assassin can possibly fail. Not only does he possess the strength and processing capabilities of a robot; he also is loaded down with the latest in automatic weapons. In addition to all this technology, he has in his possession what would have been the height of eighties data, a sheet torn from the white pages, which supplies him with the phone number and address of all the Sarah
Connors who reside in his target area. As the futuristic terminator systematically works his way down the list of Sarahs, our heroine becomes a bit concerned.

After work she returns to the apartment she shares with a friend only to learn via an answering machine that yet another blind date has canceled, so Sarah heads out to a club. That way, if the threat is real, she will be able to hide in a crowd. It isn’t long until the terminator is on her trail, and after a brief visit to her apartment, Arnold shows up at the club with guns blazing and begins wreaking mayhem. Chaos, bloodshed, and screaming displace bad dance moves as everyone scrambles to escape. But wait, there is yet another player in this dark drama.

You see, at the same time as her assassin from the future shows up, her protector from the future makes his presence known while extending Sarah this compelling invitation: “Come with me if you wanna live.” With the choice so obvious, it doesn’t take Sarah long to decide: she wants to live. Sarah runs from the bar, jumps in a car with a total stranger, and the two of them try to escape. But the terminator assassin
is relentless. A high-speed chase ensues. Bullets shatter the car windows and frazzle Sarah’s nerves. No matter where they go or what they do, they just can’t seem to shake her futuristic assailant.

This mild-mannered waitress and wannabe girlfriend has no idea why this epic battle rages around her. As bullets fly and cars crash, her protector begins to tell her who she is. He explains that in the future she is a legend and that an entire army wages war equipped with the foresight and strategies she recorded and passed on to her son. In the future she is part of a heroic fight against the enemy of all humanity.

Sarah just can’t buy that she is a player in this absurd story and is confident there has been a case of mistaken identity. There is no reason for her to be viewed as a threat in the present or the future! In an attempt to bring clarity and some sanity, Sarah counters the claim of her protector from the future. She isn’t a hero…she is just a waitress! She doesn’t even have a boyfriend, so certainly there’s no son! This nightmare is all a grave mistake; she’s been confused with someone else!

But her guardian insists that she is, in fact, Sarah Connor the hero and that his mission is to equip and protect her. Understandingly overwhelmed and suddenly undone, Sarah yells out, “I didn’t do anything!”

To which her future guardian counters, “No, but you will!”

At that moment, sitting with my son on the couch, I was arrested.

This line from decades past, “No, but you will!” crashed into my present with the realization that our enemy often knows who we are before we discover who we are. And it is high time we each realize the two things Sarah learned that night.
Lovely One,
1. You are a target.
2. You might be a hero.
I say might be, because the choice is ultimately yours.