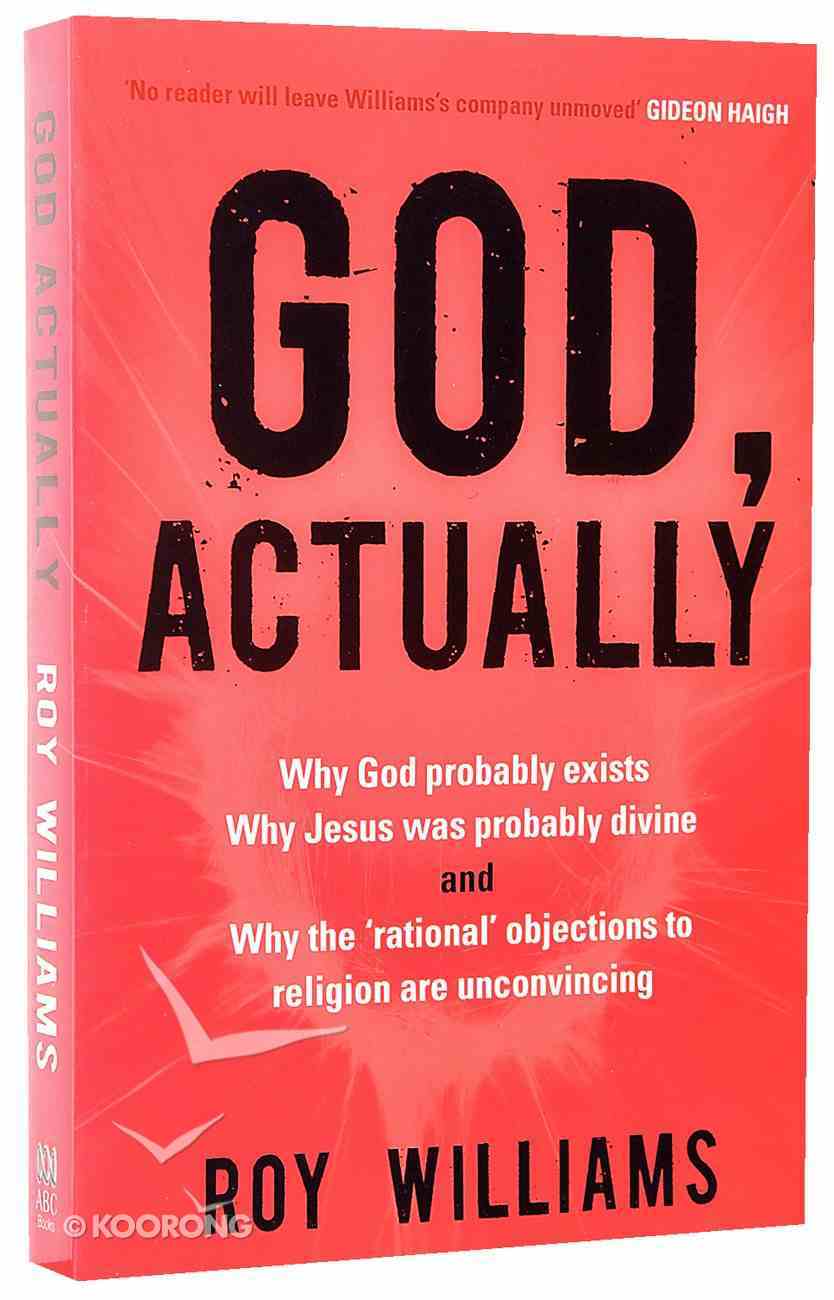 A fascinating and topical book in which the author harnesses his legal skills to analyse the arguments for and against the existence of God. God, Actually is a highly original and eclectic book about Christianity, covering a wide range of...

As Though It Were Actually True
Matthew E Cochran
eBook

The Reason For God: Belief in An Age of Skepticism
Timothy Keller
Hardback

Why There Really is a God: And What You Need to Know About Him
Andrew W Wilson
Paperback

If God, Then What?
Andrew Wilson
Paperback

If God, Then What?
Andrew Wilson
eBook

A fascinating and topical book in which the author harnesses his legal skills to analyse the arguments for and against the existence of God.
God, Actually is a highly original and eclectic book about Christianity, covering a wide range of subjects. Williams doesn't preach to the converted or attempt to browbeat sceptics. Instead, he persuades using rational argument drawn from non-religious sources: physics, chemistry and biology; politics, history and sociology; music, novels, poetry and film.


In part the book is a counter to the recent bestsellers by atheists like Richard Dawkins, Christopher Hitchens and Sam Harris, and shows that belief in Christianity can and should be based on logical deductions from known facts. It is not a matter of ignorant superstition or blind faith.
Praise for God, Actually:

"Full marks go to Roy Williams, who has written an antidote to Richard Dawkins and Christopher HitchensThis is a well-argued and sensible approach to Christianity."
- Bruce Elder, The Sydney Morning Herald, 19-20 July 2008

"Of course the entire book is a piece of proselytising, albeit of the lowest key, the humblest kind you may experience That's Williams' advantage. We have heard many of the messages before, but this time the tone is respectful and correct, though he is never apologetic for the faith that has transformed him."
- Jill Rowbotham, The Weekend Australian, 12-13 July 2008

"It's time for believers to stand up and be counted. That's what former legal eagle and author Roy Williams does in this very sane, well argued book Williams mounts a passionate but tightly reasoned defence of religious faith in the 21st century he sifts through the evidence and confidently deconstructs the debate."
- Phil Brown, Brisbane News, 2-8 July 2008

"Williams has not only done a lot of hard thinking and reading, he has the lietrary skills to do justice to his views. In one sense, this book is a reply to the trenchant critiques of religion by writers such as Christopher Hitchens and Richard Dawkins. It is also the story of Williams' own journey from atheism to Christianity. While informed by this personal perspective, Williams argues his case like the lawyer he is The value of the book, whether you agree with it or not, is that it forces you to take up the challenge and justify your own views on God's existence."
- Fiona Capp, The Age (Melbourne), 19 July 2008

"You don't need blind faith to enjoy this book. Nor does it browbeat skeptics. Instead, God, Actually is a long-overdue, highly invigorating enquiry into Christianity and the debates surrounding the existence of God. If you're sick of hearing that religion doesn't work because it's not rational, you can draw a breath of relief."
- Doubleday Australia Book Club, August 2008

"There are few things in God, Actually with which I would quarrel I am encouraged that an intelligent Australian has risen to the challenges posed by the 'New Atheists' and responded with such an articulate and reasoned defence of Christian faith. I hope that God, Actually will be read with as much attentiveness as The God Delusion."
- Bishop Tom Frame, Director, St Mark's National Theological Centre

"A painstakingly honest and thoughtful book. And wherever you sit on the believer-nonbeliever spectrum, it demands close attention for the respect demonstrated by the author for his readers God, Actually is a book that will stir ferocious argument and debate. It is erudite, wide-ranging, reasoned and reasonable, and asks only that its observations and arguments be approached with an open mind."
- Diana Simmonds, Sydney Alumni Magazine, Spring 2008

"The book is a very considerable achievement. It is exceptionally well-written, and carefully nuanced on all the crunch points."
- Graham N. Stanton, Lady Margaret Professor of Divinity Emeritus, University of Cambridge, Letter to the author, 22 July 2008

"I thought that God, Actually was one of the best statements of reasoned faith that I have read. I loved it."
- Rev. Tim Costello, Chief Executive, World Vision Australia, Letter to the author, 19 September 2008


All quotes courtesy of the author

One of Australia's emerging public intellectuals and writers, Roy Williams' distinguished 20-year career in the legal profession was cut short in 2004 when he experienced a life-changing illness. Forced to leave the law, he took time to recuperate before deciding to become a writer. His book reviews appear regularly in The Australian and The Sydney Morning Herald. He also contributes to Australian Literary Review, Dissent and Inside Sport, he recently authored God Actually.
-Editorial Review.