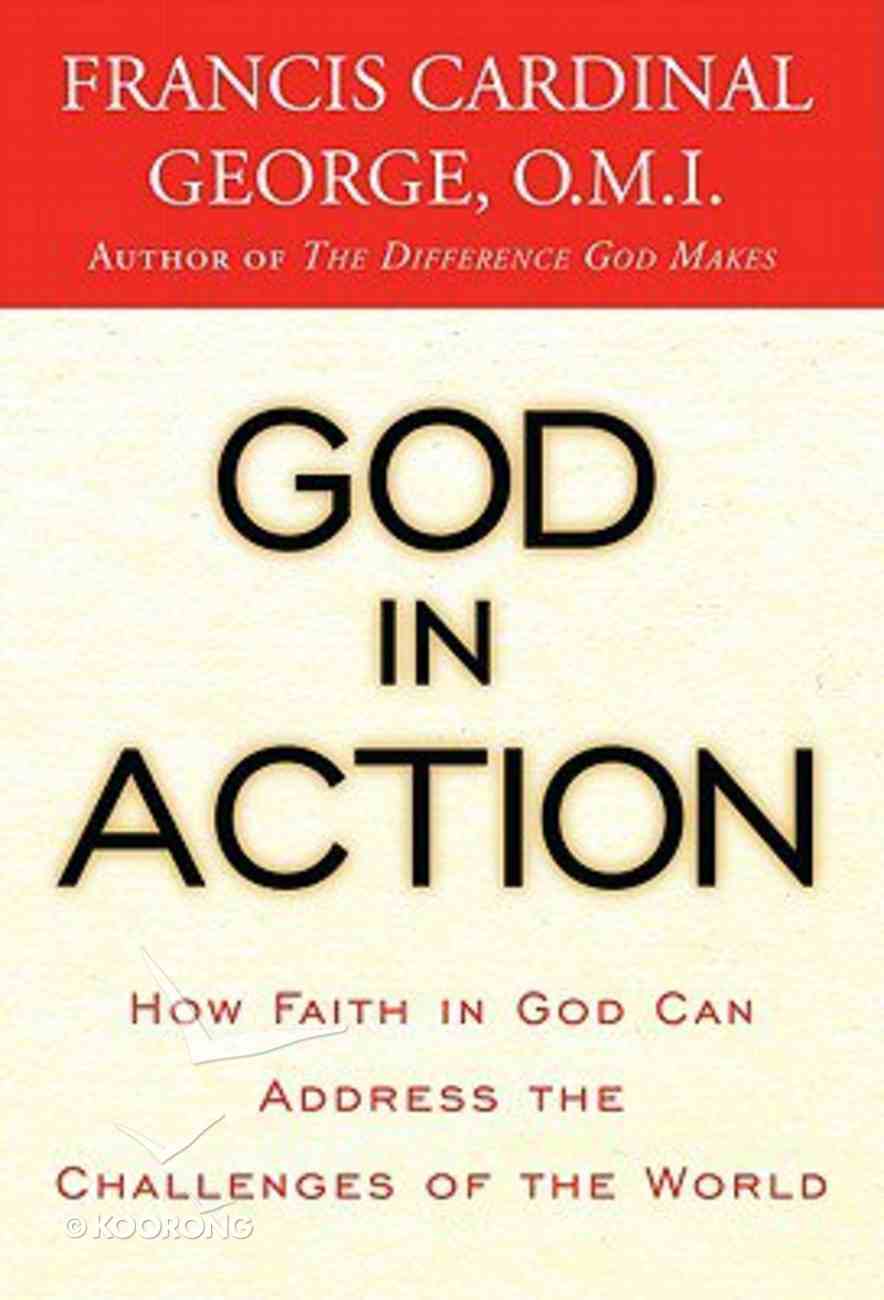 "This book is a real winner and about as timely as it gets. God is in action in this very book." -Timothy M. Dolan, Archbishop of New York "With powerful clarity, God in Action brings the wisdom of the Gospel...

The Secret Battle of Ideas About God
Jeff Myers
Hardback

"This book is a real winner and about as timely as it gets. God is in action in this very book." -Timothy M. Dolan, Archbishop of New York "With powerful clarity, God in Action brings the wisdom of the Gospel to our time, answering the demands of today with an urgent challenge to each of us: the challenge to renew society with the Gospel values of truth and charity. His challenge is one we would be wise to embrace with courage. God in Action is our key to bringing Christ-and hope-to the world through our hands." -Carl A. Anderson, Supreme Knight of the Knights of Columbus and the New York Times bestselling coauthor of Our Lady of Guadalupe "This challenging book begins by asking us to take seriously the idea that God is no mere afirst cause,a but always and everywhere actively present in the unfolding of human events-bringing good from evil, hope from despair, life from death. With his long experience as an influential religious leader and thinker, Cardinal Francis George has thought deeply about how to discern divine grace operating in the world and how to cooperate with it. God in Action brings the fruit of that reflection to bear on a wide range of current issues with the clarity and conviction that are the marks of a great teacher." -Mary Ann Glendon, professor of law, Harvard University "Cardinal Francis George, a thoughtful citizen as well as a distinguished churchman, knows that a democracyas habits of heart and mind are crucial to that democracyas political health. His reflections on the crossroads where culture, moral reasoning, and politics meet is a genuine contribution to the debate that is American democracyas lifeblood. God in Action is an engaging and provocative read." -George Weigel, Distinguished Senior Fellow and William E. Simon Chair in Catholic Studies, Ethics and Public Policy Center "In a culture eager to shoo God to the margins of public life, God in Action reminds us that Gospel values and Catholic principles are meant to transform societies as well as individuals. Francis Cardinal Georgeas carefully reasoned, wide-ranging reflections challenge readers to consider political and social debates from an eternal perspective, one in which God is not an obstacle to our freedom but its surest guarantor." -Colleen Carroll Campbell, host of EWTNas Faith & Culture, author of The New Faithful, and former presidential speechwriter
-Publisher

"What if God has his own ways that are not always our ways? What if God acts in public affairs in ways that can, of course, be ignored from day to day but at a price for individuals and whole societies? If God is an actor, how is it possible to trace his action? . . . Can we discover God’s actions in the part of human experience that is public in our day?" —Francis Cardinal George

In this bracing manifesto, His Eminence Francis Cardinal George, one of the leading Catholic intellectuals in America today, provides refreshing insight into the intersection of faith and the public sphere. Finding both challenges and reasons for hope, he lays out a vision for national life that respects natural law, human dignity, and the essential ways religion uniquely contributes to the common good.

In our country today, the significance of religious faith is often reduced to personal spiritual convictions or peculiar ideas found within self-contained churches, synagogues, temples, and mosques. Yet, as Cardinal George argues, it is God acting through humanity that is the very root of the core ideals that shape society. In the process, a moral framework is built that allows life to flourish. Consequently, he calls for resistance to creeping ideas that seek to deny religious organizations the freedom to act on their convictions and, thus, shutting voices of faith out of the public square on culture-defining issues.

Moreover, Cardinal George calls for a fundamental reevaluation of questions surrounding human rights, religious liberty, respect for life, just war, commerce, immigration, and globalization. In turn, he points out a clear path that respects individual conscience while integrating faith and natural law into the public conversation on our shared future.

An important book for challenging times, God in Action presents a universal message rooted in the Catholic philosophical tradition that is impossible to ignore.
-Publisher

There are many books about religion in public life. This book is not intended to be simply one of them. If the discussion about public life begins with “religion,” it usually treats the influence of religious belief on people when they act in their capacity as citizens. Religion then has influence if it shapes the thinking and actions of people who act. It has influence in public life if it shapes the thinking and actions of those who hold public office and those who elect them. If public life is taken to extend beyond the political to other areas where society is created, religion is still usually considered as a set of ideas peculiar to churches or synagogues, mosques or temples, ethical culture groups or moral improvement societies. Religion in this sense is primarily a philosophy of life. It is a public benefit when its practice inspires the altruism necessary for a civil community’s common life. It is a public problem when its practice leads to conflict or oppression of various sorts. In all these instances, however, religion is reduced to a set of ideas in competition with other ideologies.

What, however, if God has his own ways that are not always our ways? What if God acts in public affairs in ways that can, of course, be ignored from day to day but at a price for individuals and whole societies? If God is an actor, how is it possible to trace his action? There are books on spirituality, the Exercises of St. Ignatius of Loyola, for example, that help an individual to enter into a unique conversation that leads to a discovery of God’s will for him or her. This is not such a book. There are theologies of history that try to discern the grand lines of God’s action in shaping the destiny of human societies. This book is not one of them. There are visionary eschatologies that purport to show how human actions fit into God’s intentions and then point to how things should be in the end. These pages are nothing
so profound.

This book is a modest effort to look for how God acts in the challenges of our times, in this day and age. Can we discover God’s actions in the part of human experience that is public in our day? The Second Vatican Council believed we could and challenged Catholics to read the “signs of the times.” This injunction was not to be an exercise in self- secularization, as if openness to the times means that the only criteria for making judgments would be provided by this world and on its terms. The Council’s challenge was, rather, to detect signs of eternity in the events of our world because the eternal God is at work in our times. The criteria for discerning God’s action have to be read from within human events with an eye for discovering a presence that brings good out of evil, hope from despair, and life out of death.

Catholic social theory is based upon reason in conversation with faith. Its basic category is the common good. It presupposes the God revealed by Jesus Christ, who became one of us in order to bring us under God’s sovereignty. God’s eternal Kingdom is made present now in the Church, the sacrament of God’s Kingdom, through which God acts surely and visibly. But God acts through and in all created reality. Just as religion is less a set of ideas than a vehicle for relating to God, the Church is less one more institution within a state than an instrument for relating each of us and the whole world to God.

This book considers the sense in which God is the primary actor in American society because he is the Creator and Savior of the whole world. It then examines a number of issues that challenge our reading of God’s influence in public affairs and concludes with a perspective that escapes narrow nationalism by looking for God’s action in the movement toward unifying the human family in our day.

A book such as this is the product of many occasions and much advice. I am grateful to those who asked me, on various occasions, to address some of the themes and topics discussed here. I am grateful always to those who helped me create this manuscript, especially to Mr. Thomas Levergood of the Lumen Christi Institute at the University of Chicago, whose urging and reminders and suggestions helped me bring the book to completion. I am grateful as well to Dr. Robert Royal for good advice and good example. His work helped the Doubleday editors. My staff is exemplary in their patience, and many in the Archdiocese of Chicago were understanding of the demands involved in this project, demands that sometimes prevented me from being as available to them as I might have been. I join those who might read this book in thanking all of them.