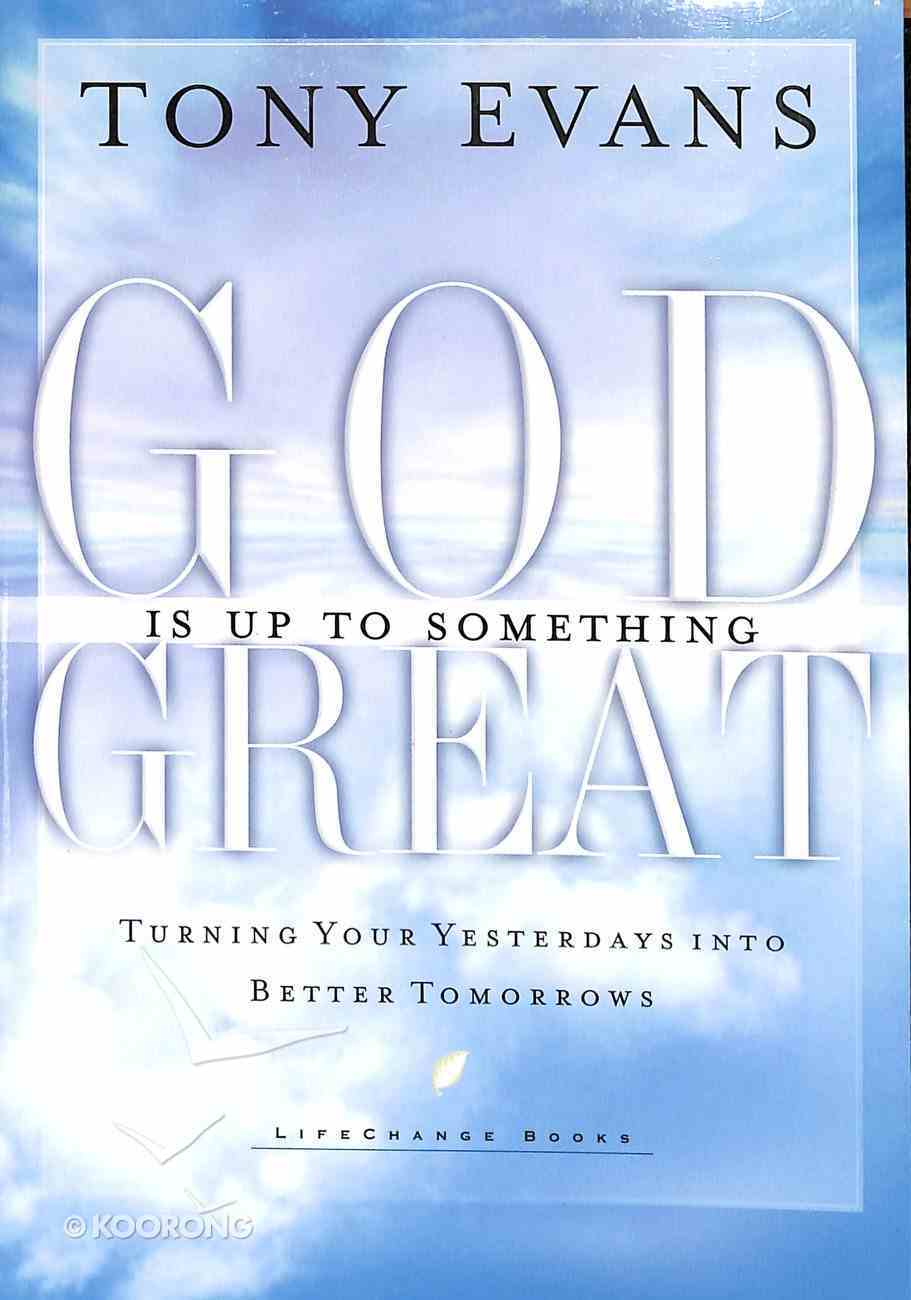 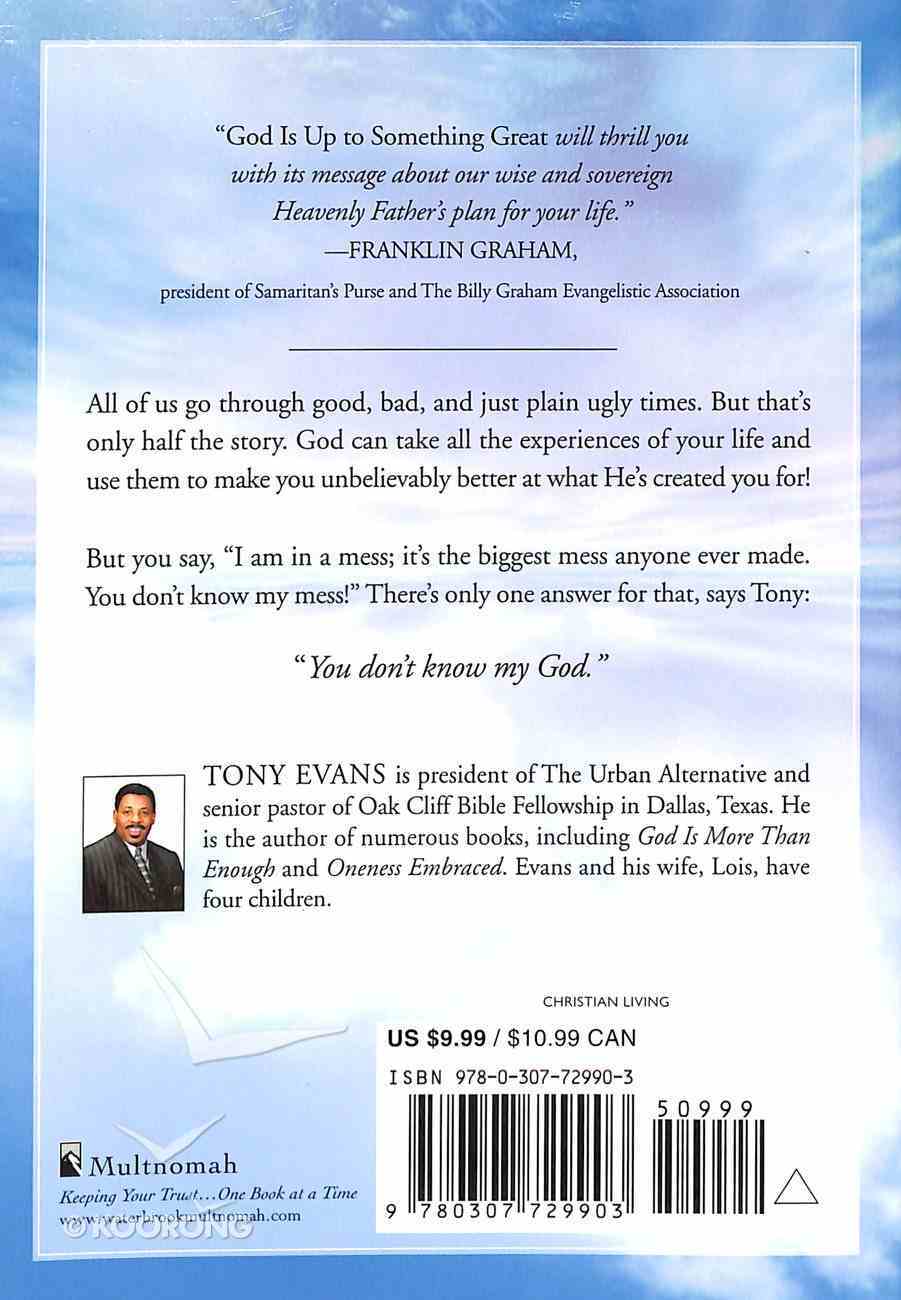 God is Up to Something Great

;Tony's style and substance have never been better! In a gripping way, he leads us beyond the ordinary toward the potential, limitless work of God in our lives. Read this, and take it personally. ; - DR. JOSEPH STOWELL ;For...

Discover Your Destiny: Let God Use You Like He Made You
Tony Evans
eBook

Who is This King of Glory? (Understanding God Series)
Tony Evans
eBook

;Tony's style and substance have never been better! In a gripping way, he leads us beyond the ordinary toward the potential, limitless work of God in our lives. Read this, and take it personally. ; - DR. JOSEPH STOWELL ;For the many difficult and seemingly unanswerable conditions that people face in life today, Dr. Tony Evans in his inimitable way of exceptional exposition and insightful wisdom illustrates for us how God weaves His will and His truth through our human situations in order to accomplish His ultimate purposes in our lives. ; - DR. E. K. BAILEY, SENIOR PASTOR OF CONCORD MISSIONARY BAPTIST CHURCH, DALLAS, TEXAS ;Tony Evans is one of the great preachers in America today. When he speaks or writes, I listen-and recommend that others do so as well! ; - CHUCK COLSON ;God has given Dr. Tony Evans a unique ability to talk straight about truth. With fewer words than perhaps anyone I know, he can get to the heart of a matter and put it into biblical perspective. God Is Up to Something Great will thrill you with its message about our wise and sovereign Heavenly Father's plan for your life. Especially if you think your past precludes a positive future, read it. It will encourage and help you to experience more of the wonder of God's love. ; - FRANKLIN GRAHAM, PRESIDENT AND CEO, SAMARITAN'S PURSE AND BILLY GRAHAM EVANGELISTIC ASSOCIATION
-Publisher

“God Is Up to Something Great will thrill you with its message about our wise and sovereign Heavenly Father’s plan for your life.”
—Franklin Graham, President of Samaritan’s Purse and The Billy Graham Evangelistic Association

All of us go through good, bad, and just plain ugly times. But that’s only half the story. God can take all the experiences of your life and use them to make you unbelievably better at what He’s created you for!

But you say, “I am in a mess; it’s the biggest mess anyone ever made. You don’t know my mess!” There’s only one answer for that, says Tony:

“You don’t know my God.”
-Publisher

Tony Evans is the senior pastor of Oak Cliff Bible Fellowship Church in Dallas, and president of The Urban Alternative, a ministry devoted to bringing about change in urban communities through the Church. He is the author of many books, including Free at Last, The Battle is the Lord's, Our God Is Awesome, Returning to Your First Love, The Promise, Who is this King of Glory? What Matters Most, and The Best Is Yet To Come.- Publisher.

Chapter 1: The Good, The Bad, The Ugly

A few years ago, the Soviet submarine Kursk went down in the Barents Sea. When diving crews reached the sunken submarine, they heard tapped SOS signals coming from inside the sub. The crew was wondering, Is there any hope?
Like those sailors, many people today feel trapped in impossible situations. They feel like banging against their circumstances and wondering the same thing: Is there
any hope? Do you ever feel that way, wondering how your circumstances could possibly be worked out, how your life could come to mean something?
Well, let me tell you what I know is true: God is up to something great.
It’s true. He’s up to something great in every person’s life. Do you believe that? Do you feel that God is up to something great in your life? That His plans and purposes for you are about more than just trudging through the days, wondering to yourself, Is there really any hope? Do I have a purpose?
This book is for people who feel that they are fresh out of hope. It’s for people who’ve made big mistakes, who’ve seen every ray of sunshine turn into clouds of rain. It’s for people with broken dreams and lingering disappointments— people whose hope and sense of purpose, despite their best efforts, have been dashed to the ground. It’s even for people who’ve known success but still have holes in their hearts.
And not all hope-deprived people are poor either. If you have money, maybe you’re spending it on psychologists, trying to find hope within yourself. Trying by mental manipulation and self-analysis to drive out anger, fear, and negativity, as though by emptying yourself of bad you might automatically be filled with good. But hope is not the absence of despair. It’s the presence of something far greater, something only God can give. Hope is not passive; it’s the most active force in the world because it is derived from the most powerful Being of all: Hope comes from God. It’s real. And it’s never more than a moment away. And with hope comes purpose. That’s the message of this book—through all the circumstances in your life, God is up to something great.

So let’s get started…

I doubt Clint Eastwood ever realized that a character he played would introduce a phrase into the English language that would still be used decades later. But he did so just the same, through a movie he was in in the 1960s. I didn’t see The Good, the Bad, and the Ugly when it first hit the silver screen, but I saw it on video years later. By that time the title had given our culture an expression that hasn’t gone away for nearly forty years now.
Well, the title of the movie made me think of a guy I knew who’d just graduated from medical school. He had been given a full scholarship, which paid all his bills and let him study twenty-four hours a day. By my reckoning, that was “good” because it was something positive and beneficial that moved him forward in life. I knew another guy who’d been given a full scholarship to a different kind of school, to study engineering. But instead of studying and learning, he spent his time drinking beer and goofing off. He flunked out. That was “bad” because he brought disaster on himself. I knew a third fellow who’d planned to be a surgeon. But one day a lawn mower he was using blew up and burned his hands so badly that he lost several fingers. And that was “ugly” because his dream died through something that wasn’t his fault.
My question is this: How often have you used the terms good, bad, and ugly to characterize what’s happened in your life? All of us go through good, bad, and just plain ugly times at one point or another.
But, friend, that’s only half the story—because God is up to something great through all of it.
Through His magnificent grace, God can take the good, the bad, and the ugly experiences in your life and use them to make you unbelievably better at what He’s created you for, whatever that might be! And that’s what is so amazing about God—He can take all those good, bad, and ugly experiences and use them for your calling.      That’s good news, right?
In God’s economy, all is redeemed and nothing is ever lost. He can take the good things that we remember most fondly, the bad things we might like to forget, and the ugly things that have shaped us into people we didn’t start out to be and use all of them to facilitate His individual purpose for each and every one of us. Including you.
As Job said of God: “I know that You can do all things, and that no purpose of Yours can be thwarted” (42:2). God is able to take and make whatever He wills. He can take whatever and whoever you are and make you into whatever and whoever you need to be to become your best possible self.
This is one of the most glorious promises in all of Christianity. If God couldn’t mold us and break us—if He couldn’t pull us back from the jaws of hell and turn lives of waste into lives of witness—an awful lot of us would have suffocated, drowned, or blown ourselves up a long time ago. If He couldn’t take our strengths and our weaknesses and our mistakes and the bad things that have happened to us and use them for His purposes and our benefit.… Well, that’s what this book is all about.
Because God can take the good times, the bad times, and the ugly times we all endure and use them to instruct, strengthen, and refine us for His holy purposes. He can!