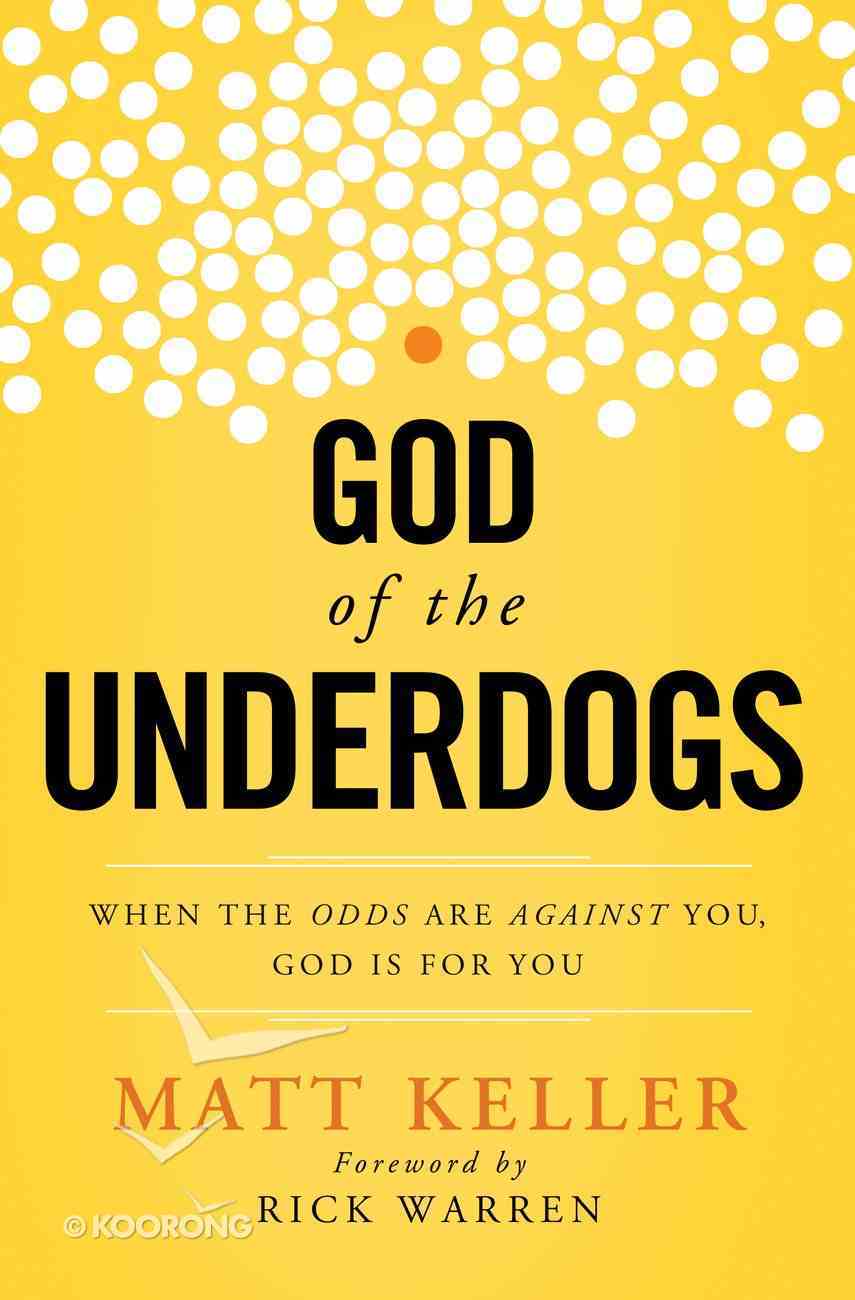 God of the Underdogs

Have you ever felt like an underdog? Like you don't have the ability or confidence to pursue your dreams? The Bible is full of ordinary people the world considered underdogs. Yet God chose them to do his work. ...

The Wall Around Your Heart
Mary Demuth
eBook

The Key to Everything: Unlocking the Life You Dream of Living
Matt Keller
eBook

You're Going to Be Okay: Encouraging Truth Your Heart Needs to Hear, Especially on the Hard Days
Holley Gerth
Paperback

A Million Little Ways: Uncover the Art You Were Made to Live
Emily P Freeman
Paperback

Have you ever felt like an underdog? Like you don't have the ability or confidence to pursue your dreams? The Bible is full of ordinary people the world considered underdogs. Yet God chose them to do his work.


In God of the Underdogs, pastor Matt Keller tells his own story of being an underdog as well as the stories of the underdog heroes in Scripture. Men and women like Moses, Esther, King David, Samuel, Joseph, Paul the Apostle, and even Jesus. The stories and scriptures you'll read will inspire you to face down the excuses holding you back, and you will be free to pursue your destiny as never before!


Maybe you're thinking, My past is too dark. "But it's your past," Matt assures you. God of the Underdogswill show you that the Creator of the universe wants you to accomplish great things for him. He wants to use your life in a way he will use no one else's. Don't shrink back from your destiny; lean into it. The Bible says you are a friend of God. Beloved. Highly esteemed. Known. More than conquerors. God sees your potential. It is your inability, not your perfection, that makes you an underdog worth using in God's eyes. So rise up, underdog! God has a special plan for your life.

Matt Keller pastors Next Level Church (www.NextLevelChurch.com), the church he planted in 2002 in Ft. Myers, Florida.He is also the author of "The Up the Middle Church." Matt travels and speaks often and is passionate about coaching pastors nationwide through online video networks. Out of this passion, he founded Next Level Coaching Co. (www.MyNextLevel.me). Matt blogs frequently at www.MattKellerOnline.com. C

God of the Underdogs: When the Odds Are Against You, God is For You (Unabridged, 8 Cds)
Matt Keller, Rick Warren
CD

God of the Underdogs: When the Odds Are Against You, God is For You (Unabridged, Mp3)
Matt Keller
CD