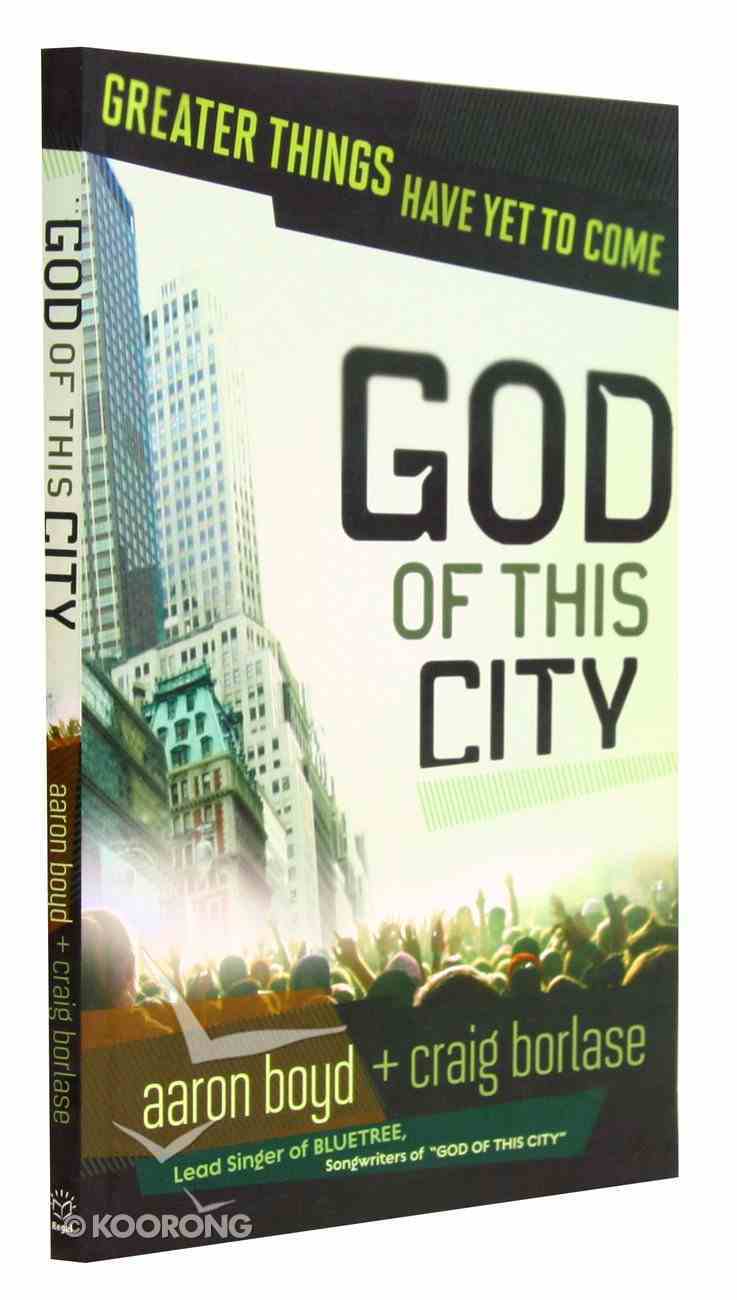 God of This City

The popular worship song "God of This City" was written by Aaron Boyd, lead singer of Bluetree, while they were on a mission trip to Thailand. Near the end of a gig in a bar beneath a brothel in one...

When Did We Start Forgetting God?: The Root of the Evangelical Crisis and Hope For Our Future
Mark Galli
Paperback

A Heart For the City
John Fuder (Ed)
eBook

A Letter to My Anxious Christian Friends: From Fear to Faith in Unsettled Times
David P Gushee
Paperback

The popular worship song "God of This City" was written by Aaron Boyd, lead singer of Bluetree, while they were on a mission trip to Thailand. Near the end of a gig in a bar beneath a brothel in one of the world's sex-trade capitals, Aaron began to sing to the city that "greater things are yet to come / greater things are still to be done in this city." Within a few days, the full lyrics had emerged; within a few months, the song was ringing in Bluetree's hometown of Belfast, where the promise of "greater things" is starting to bear fruit. "God of This City" eventually became the anthem of the Passion international worship conferences, but there is more to the song than an inspiring melody and unusual history. In God of This City, the book, Aaron Boyd unpacks the lyrics of the song, and along the way shares his thoughts on the state of the Church, the persistent injustice in the world and the biblical mandate to right the wrongs done to our global neighbors. Many local churches and mi
-Publisher

Aaron Boyd began to sing. The audience that day was mamasans, go-go dancers, girls working in prostitution and "johns"- men who had traveled far looking for sex. His band, Bluetree, had been invited to play worship songs in this bar, hidden deep in Pattaya, Thailand, the human-trafficking capital of the world. As a guitar line looped and repeated, as heat and humidity pressed down like an unseen hand, Aaron began to sing a new song: "Greater things are yet to come; greater things are still to be done in this city." "God of This City" was birthed that day, soon became a favorite at Louie Giglio's Passion internation conferences, and has since become the heart's cry of countless churches and ministries for their own communities. In what began as a humble, heart-broken prophecy from one man, the Body of Christ has found an anthem to declare its purpose: to be worshiping agents of compassion, justice and change. When Aaron Boyd glimpsed a vision of God's love in that broken, oppressive place, he knew that singing about it was not enough. He had to do something more. In God of This City, he shares the biblical mandate for God's people to right the wrongs done to the voiceless everywhere. This is a challenge to the Church to live lives of worship marked by actions that will transform a world of cities longing for greater things.
-Publisher

AARON BOYD is the lead singer/songwriter of Bluetree, a band born in Belfast, Northern Ireland. Aaron fell in love with Jesus at the age of 17 and quickly found that God had a destiny for him within the world of Christian music. He formed Bluetree in 2004 and writes God-focused songs for the Church to lift as a banner over their lives. Aaron is married to Jill, an they have two children, Lily and Josie.

Craig Borlase is the author of The Naked Christian (RELEVANT Books). He has written and co-written more than 14 books with authors including Mike Pilavachi, Cameron Dante and Delirious?. The Chorleywood, England, native has worked in publishing and led worship for Soul Survivor, and now lives in London with his wife and daughter.
Craig Borlase (craigborlase.com) is a bestselling British author and
collaborative writer of more than forty books. He specializes in dramatic
memoir driven by faith. His most recent book is 10,000 Reasons with Matt
Redman (David C Cook,August 2016), and his next releases are Fleeing ISIS
Finding Jesus with CharlesMorris (David C Cook, January 2017) and Finding
Gobi with Dion Leonard (ThomasNelson, summer 2017).