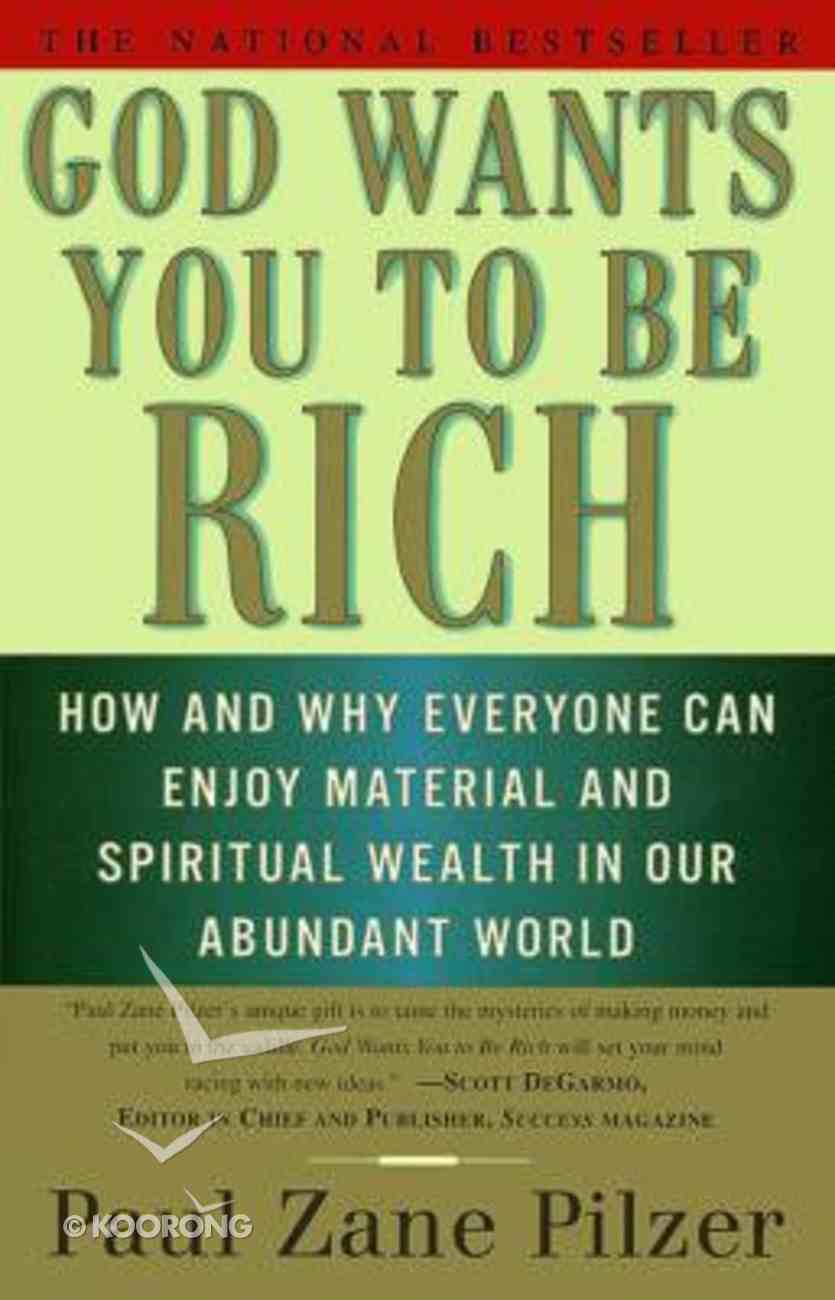 God Wants You to Be Rich

In "God Wants You to Be Rich," bestselling author Paul Zane Pilzer provides an original, provocative view of how to accumulate wealth and why it is beneficial to all of humankind. A theology of economics, this book explores why God...

How to Be Rich
Andy Stanley
eBook

How to Manage Your Money
Larry Burkett
Paperback

Success From the Inside Out: Power to Rise From the Past to a Fulfilling Future
Nona Jones, Christine Caine (Fwd)
Hardback

Debt-Proof Your Marriage: How to Manage Your Money Together
Mary Hunt
Paperback

Debt-Proof Living: How to Get Out of Debt and Stay That Way
Mary Hunt
Paperback

In "God Wants You to Be Rich," bestselling author Paul Zane Pilzer provides an original, provocative view of how to accumulate wealth and why it is beneficial to all of humankind. A theology of economics, this book explores why God wants each of us to be rich in every way -- physically, emotionally, and financially -- and shows the way to prosperity, well-being, and peace of mind.
-Publisher

Chapter 1: GOD WANTS YOU TO BE RICH "Professor Pilzer!" the woman exclaimed, following me into the elevator after my speech. "I must tell you how much your work has changed my life!" "In what way?" I asked. "All my life I wanted to be rich," she replied. "But I always believed that I could only succeed in business at the expense of someone else, and as a good Christian I could never do that. Reading your book and hearing you speak has shown me how wrong I was!" The woman explained that two years ago, at age fifty-five, she had gone into her own business, and that she was now making three times more money than she had earned after working thirty-two years for someone else. "How does your new financial success relate to your religious beliefs?" I inquired. "That's the real tragedy of my life," she replied. "For fifty-five years, I believed that God didn't want me to have money, that the economy was always heading downhill, and that the only way to climb the ladder to success was by stepping on someone else. But I was wrong! Now I realize that these views were just excuses for my lack of initiative, and that one of the things God wants me to do most as a good Christian is to be rich. That's why he created a world where the more successful I am, the more wealth there is for everyone else to share." Every major religion has an explanation of how God created the universe. What is important, however, is nothowit was done, butwhy.As an economist and businessperson, I have devoted my life to explaininghowpeople can become rich. I realize now that I have failed to reach certain people because I have incorrectly assumed that they already understoodwhythey should become rich. There is a widespread feeling today that there is something wrong with individual economic success. People who have become rich through great personal sacrifice sometimes feel guilty about their success -- and often pass this guilt on to their children, with disastrous consequences. Even worse, people who fail to achieve success on their first try sometimes refuse to try again. Most people believe they should achieve wealth primarily for their own material comfort or that of their families. This is far too narrow a view. God does want each of us to be rich in every possible way -- health, love, and peace of mind, as well as material possessions. God wants this, however, not just for our own sake, but for the sake of all humankind. The reason, as we shall see throughout this book, is that an increase in wealth for an individual almost always represents an even larger increase in wealth for society at large. This is especially true in our modern economy, where the largest individual financial rewards are increasingly reserved for those people making the greatest positive impact on our society. In ancient times people didn't spend much time wondering about how to improve their lives. People generally believed that their lives were predestined. A person was not supposed to try to change his or her fate, let alone even ponder whether such a fate was predestined in the first place. It was each person's obligation to follow the will of God -- or the gods -- whatever that will might be. Until roughly the fourth century B.C., it was commonly believed in parts of the world that the mysterious lights in the sky were gods wandering about the heavens. In fact, the word "planet" comes from the Greek word for "wanderer." This illustrates what most people thought about their daily lives. The gods (planets) wandered about in the heavens, and their wanderings caused the crops to grow, the rain to fall, and the tragedies and joys of human existence. The Greek philosopher Aristotle was one of the first people to refute this belief. Aristotle believed that there was an order to things that people could understand and use to control their lives. In 340 B.C., Aristotle devised one of
-Publisher

Paul Zane Pilzer is the author of "Other People's Money" and "Unlimited Wealth". He has served as an economic adviser in two presidential administrations and as a commentator for CNN and National Public Radio. He is also the founder and publisher of Zane Publishing. C

The Richest Man Who Ever Lived
Steven Scott
Hardback