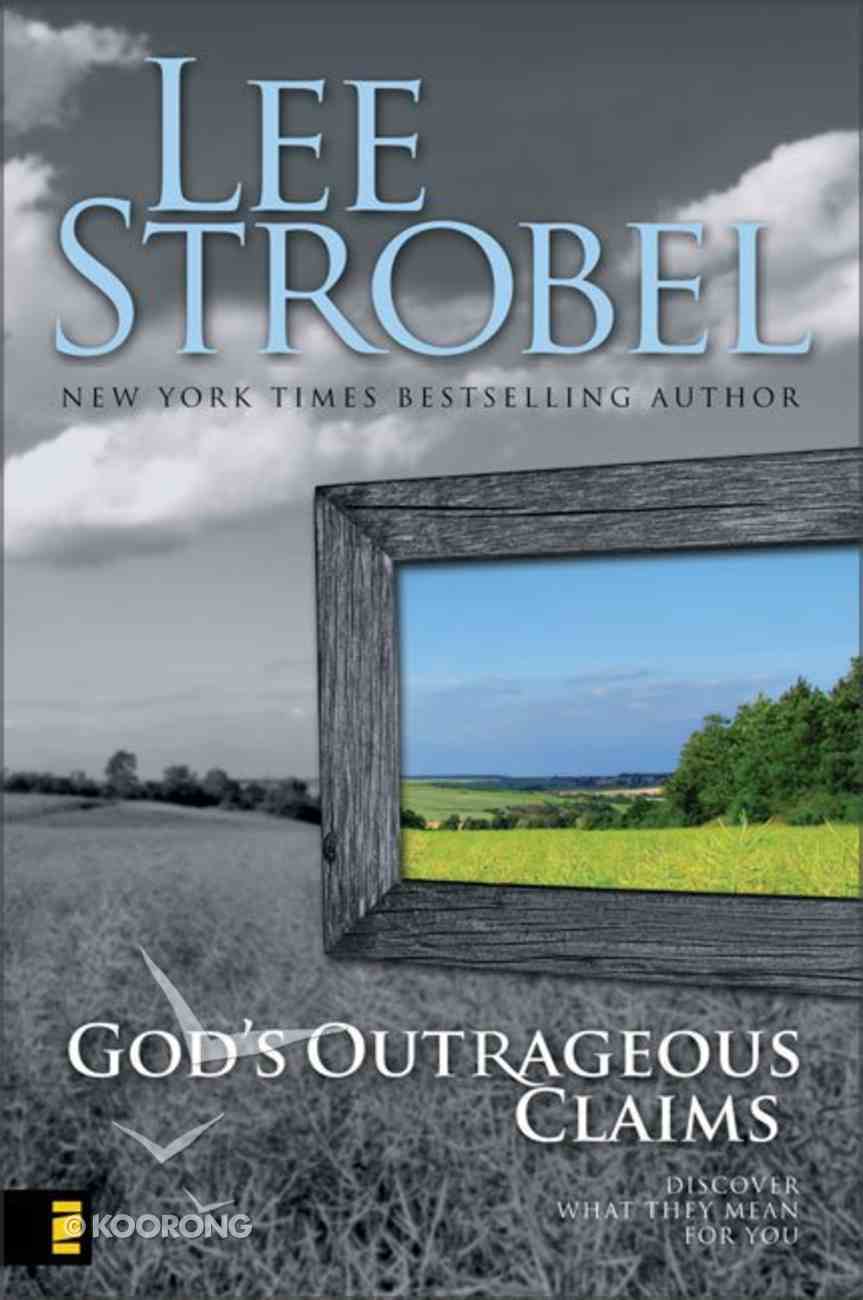 Lee Strobel presents thirteen phenomenal claims by God that can change the entire trajectory of your life and revolutionize your attitudes, your character, and your relationships.

God Walk: Moving At the Speed of Your Soul
Mark Buchanan
Hardback

Adore: A Simple Practice For Experiencing God in the Middle Minutes of Your Day
Sara Hagerty
Hardback

The Three-Mile Walk: The Courage You Need to Live the Life God Wants For You
Banning Liebscher
Hardback

The Gospel According to Jesus
John Macarthur
Hardback

Lee Strobel presents thirteen phenomenal claims by God that can change the entire trajectory of your life and revolutionize your attitudes, your character, and your relationships.
-Publisher

God's Outrageous Claims Copyright 1997, 2005 by Lee Strobel This title is also available as a Zondervan audio product. Visit www.zondervan.com/ audiopages for more information. Requests for information should be addressed to: Zondervan, Grand Rapids, Michigan 49530 Library of Congress Cataloging-in-Publication Data Strobel, Lee, 1952 - God's outrageous claims : discover what they mean for you / Lee Strobel. - Updated ed. p. cm. Includes bibliographical references. ISBN-13: 978-0-310-26612-9 (jacketed hardcover) ISBN-10: 0-310-26612-2 (jacketed hardcover) 1. Christian life. I. Title. BV4501.3.S785 2005 248.4 - dc22 2005015823 This edition printed on acid-free paper. All Scripture quotations, unless otherwise indicated, are taken from the Holy Bible: New International Version. NIV. Copyright 1973, 1978, 1984 by International Bible Society. Used by permission of Zondervan. All rights reserved. The website addresses recommended throughout this book are offered as a resource to you. These websites are not intended in any way to be or imply an endorsement on the part of Zondervan, nor do we vouch for their content for the life of this book. All rights reserved. No part of this publication may be reproduced, stored in a retrieval system, or transmitted in any form or by any means - electronic, mechanical, photocopy, recording, or any other - except for brief quotations in printed reviews, without the prior permission of the publisher. Interior design by Beth Shagene Printed in the United States of America 05 06 07 08 09 10 11 / ?DCI / 17 16 15 14 13 12 11 10 9 8 7 6 5 4 3 2 1 OUTRAGEOUS CLAIM #1 THERE'S FREEDOM IN FORGIVING YOUR ENEMIES Associated Press reporter Terry Anderson was held hostage in Lebanon for nearly seven years. He was chained to a wall in a filthy, spider-infested cell. He suffered through sickness. He endured mental torture. He longed for his family. He was ground down by the dull ache of incessant boredom. Through it all, he was given one book - the Bible - and as he devoured it in a search for words of hope, he came across what appeared to be outrageous words of hopeless navete: "You have heard that it was said, 'Love your neighbor and hate your enemy,' " Jesus told a crowd. "But I tell you: Love your enemies and pray for those who persecute you." Can you imagine how outlandish that command must have seemed to Anderson after spending 2,455 mind-numbing days in cruel captivity? Love whom? Pray for whom? Show kindness toward those who brutalized me? Exhibit compassion toward those who callously extended none to me? Is Jesus a cosmic comedian or merely a starry-eyed idealist? Finally Anderson was released on December 4, 1991. Journalists clustered around and peppered him with questions. They wanted to know what his ordeal had been like. They wanted to know his plans for the future. But then one reporter called out the question that stopped Anderson in his tracks: "Can you forgive your captors?" What an easy question to pose in the abstract; what a profound issue to ponder honestly amid the grim reality of harsh injustice. Anderson paused. Before the words of his response could come out of his mouth, the Lord's Prayer coursed through his mind: "Forgive us our sins, for we also forgive everyone who sins against us."2 Then this victim of undeserved suffering spoke. "Yes," he replied, "as a Christian, I am required to forgive - no matter how hard it may be."3 Often it is hard. So hard, in fact, that Jesus' decree to love and pray for our opponents is regarded as one of the most breathtaking and gut-wrenching challenges of his entire Sermon on the Mount, a speech renowned for its outrageous claims. There was no record of any other spiritual leader ever having articulated such a clear-cut, unambiguous command for people to express compassion to those who are
-Publisher