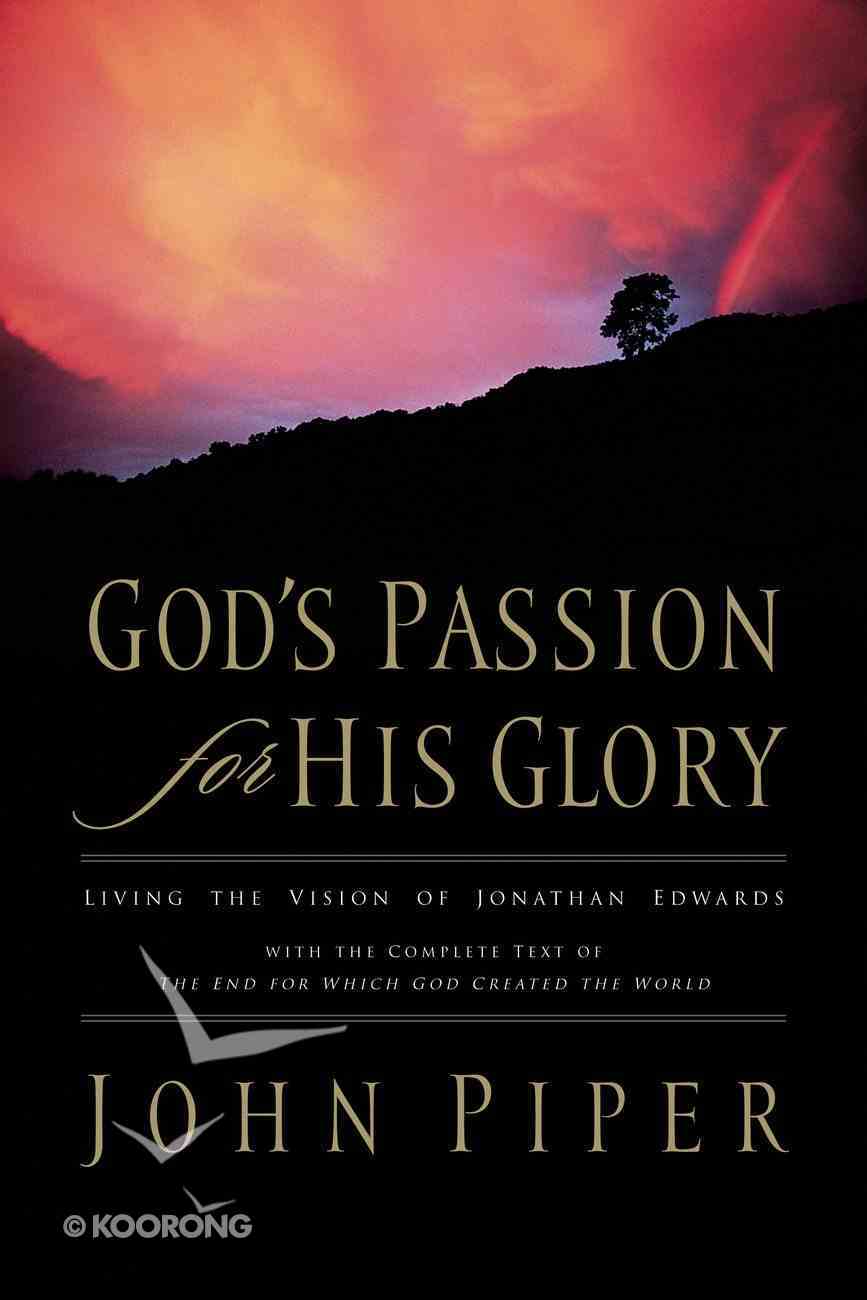 God's Passion For His Glory: Living the Vision of Jonathan Edwards

^In his essay The End for Which God Created the World, the great theologian Jonathan Edwards proclaimed that God's ultimate end is the manifestation of his glory in the highest happiness of his creatures. ^Pastor John Piper has devoted his...

Unavailable. This item is being reprinted. There will be a delay in fulfillment of your order.

^In his essay The End for Which God Created the World, the great theologian Jonathan Edwards proclaimed that God's ultimate end is the manifestation of his glory in the highest happiness of his creatures. ^Pastor John Piper has devoted his years of ministry to exploring the implications of this stunning truth for life and ministry. Understanding that God is most glorified in us when we are most satisfied in him has made all the difference for John Piper-and can transform your life as well. ^Here Piper passionately demonstrates the relevance of Edwards's ideals for the personal and public lives of Christians today through his own book-length introduction to Edwards's The End for Which God Created the World. This book also contains the complete essay supplemented by almost a hundred of Piper's insightful explanatory notes. The result is a powerful and persuasive presentation of the things that matter most in the Christian life.
-Publisher

Conception: Life begins!Life begins at conception as a single, separate, living cell. Nothing new is added except oxygen and nutrition. Fertilization occurs when a sperm and ovum join to form a single cell, full of life and bearing the unique genetic imprint of a person who has never existed before. The DNA in the 46 chromosomes of that small cell contain full instructions about that new individual's sex, eye color, foot size, brain capacity, and other physical traits. 1 week: ImplantationOn about the sixth day, the growing baby attaches to the wall of the mother's uterus. That rich nutrient lining welcomes the tiny tenant, and soon the child is sending out the chemical signal that can be detected in a home pregnancy test. Before the second week is over, the cells of the child's body will have already begun segregating themselves into the various layers that will give rise to the brain, nervous system, skin, digestive system, muscles, bones, and circulatory system 3-4 weeks: A beating heartThe baby's heart begins its first beats as early as 18 days after fertilization, often before the mother even suspects she is pregnant. Between the third and fourth weeks, the baby's head and spinal column become easily distinguishable, and arm buds appear. Legs will begin to appear days later. The umbilical cord forms, transporting oxygen and nutrients to the child. 6 weeks: Brain wavesFingers are forming, and the child's mouth and lips are apparent. The child begins his or her first movements. At six weeks, the baby has brain waves that can be measured with an electroencephalogram. 10-11 weeks: Organ systems in placeThe baby has eyelids, fingernails, and fingerprints, and can grasp an object. The kidneys begin to form urine.All body systems are in place and active: the baby has a skeletal structure, nerves, and circulation. 12 weeks: Movements and characteristicsThough too small to be felt by the mother, the baby reaches peak frequency of movement during the third month. The baby's sex can be visually determined, and the child's eyes, ears, and face begin to display distinctive characteristics. 14 weeks: A miracle of developmentEyebrows have formed, eye movements are seen. For a couple of weeks now, this baby has had all the body parts required to experience pain, including the nerves and spinal cord. 16 weeks: Making his or her presence knownThe baby becomes large and active enough for the mother to feel movement of turns, kicks, and somersaults that at some point even become visible to the outside. 20 weeks: Hearing mother's voiceIn the fifth and sixth months, the baby responds to music, sudden noises, and voices, especially that of his or her mother. Over the coming weeks, the baby will increase seven times in weight and nearly double in height. 23 weeks . . . or earlier: ViabilityViability is the time when the baby can survive outside the mother. Not long ago, viability was at 30 weeks, then 25. Today, babies at 22 or 23 weeks have been saved, and even some younger babies have survived. What will viability be tomorrow?* What you don't know can hurt youFew women faced with an unwanted pregnancy are told of the marvelous development of the life growing within them. In the absence of information, abortion seems to be the right decision at the moment. But they are not warned of what will really happen to their baby or of the possible physical and psychological effects of abortion that may stay with them the rest of their lives. And they are rarely told of the alternatives to save the life of their child.Some doctors say that abortion is a routine operation to remove "fetal tissue." But in truth, it is the destruction of a living human being. One young woman, who later regretted an abortion, stated, "The doctor said, 'A little fluid out and some fluid injected, severe cram
-Publisher