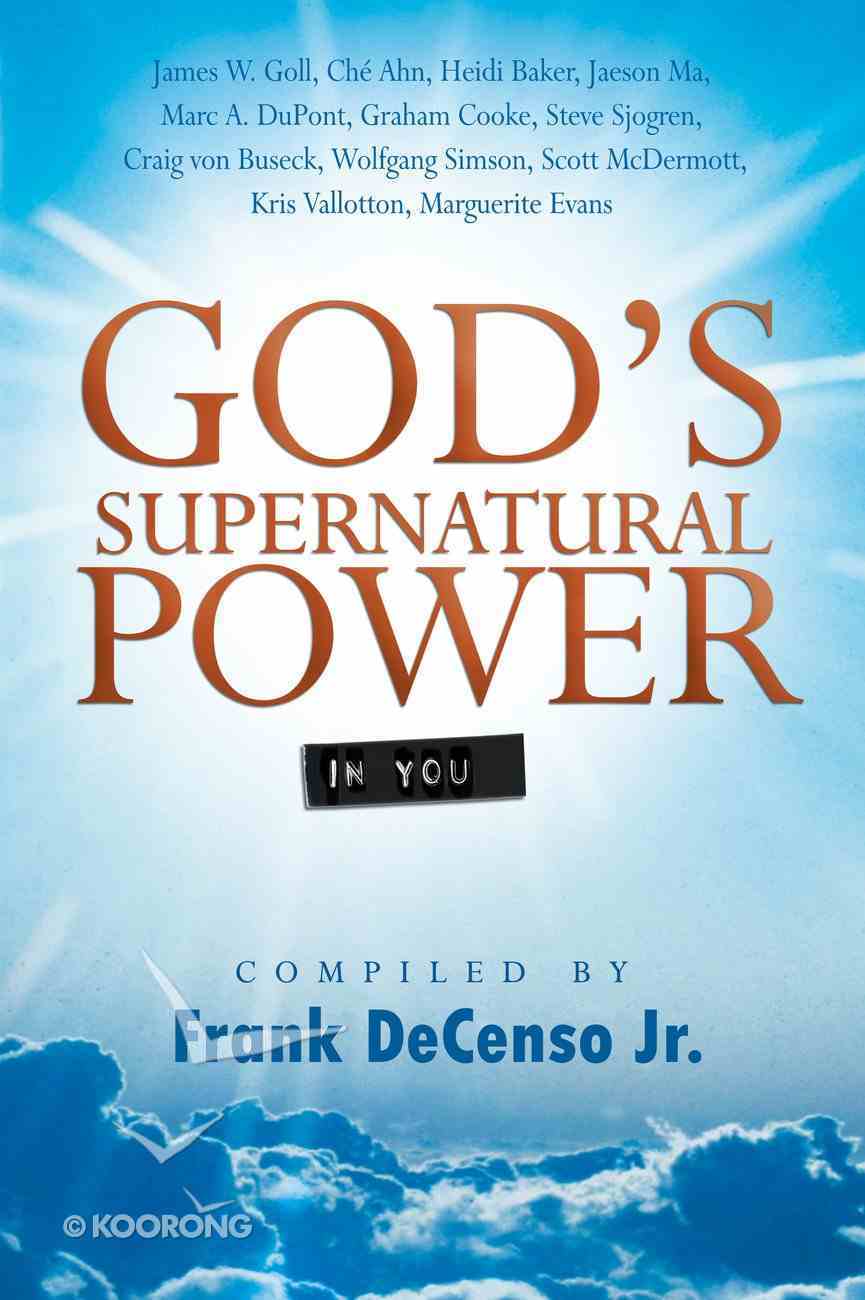 God's Supernatural Power in You

God's Supernatural Power In You is revealed by 12 well-known Christian authors who knwo firsthand how God can change lives, communities, and nations through faith-filled believers. As we learn from each other how to better spread the gospel, you...

God's Supernatural Power In You is revealed by 12 well-known Christian authors who knwo firsthand how God can change lives, communities, and nations through faith-filled believers.

As we learn from each other how to better spread the gospel, you are invited to take advantage of decades' worth of combined supernatural experiences and wisdom that will energise your spiritual and personal life.

The need for power ministry is as strong today as it was when Jesus and the apostles walked the earth. The need for demonstrations of Gods powerful love, exhibited through His church, will demolish strongholds of unbelief and relativism, as well as tear down cultural barriers that may bring confusion when only the words of the good news are shared, but its power is neglected. When Jesus and the apostles proclaimed the good news of salvation to people, works of power accompanied them. Today, the entire church needs mentored in how to bring Gods word to the world in power. This book is a prophetic call to engage te mission of bringing God's radical love to this hurting world through power ministry.

Marc Dupont, formerly on staff with Toronto Airport Christian Fellowship, is founder and president of Mantle of Praise Ministries, a transdenominational ministry concerned with revival and restoring the prophetic edge to the Body of Christ. Active in leadership ministry for fifteen years, Marc is married to Kim and teaches at seminars, conferences and churches in many nations. He is associate pastor of Heartland Community Church in Fort Wayne, Indiana. A

Craig von Buseck is ministries director for CBN.com, the Webýsite of the Christian Broadcasting Network where he oversees allýonline evangelism and discipleship efforts. He also writes the popularýChurchWatch blog and has served on the faculty of the Jerry Jenkinsý"Writing for the Soul" Christian writers conference. Craig lives inýVirginia Beach, Virginia.

Heidi and Rolland Baker, natives of Southern California, served as missionaries in Indonesia and Hong Kong before following God's call eight years ago to Mozambique. Facing overwhelming need, the Bakers have seen God provide miraculously for many hundreds of children through their ministry, and many more people through over five thousand churches that their mission has planted in ten countries.

Cathy Joseph is an experienced photography writer, editor and author. She has written for many photography magazines, including Digital SLR User, and is the author of several photography books including the Outdoor Lighting series (AVA Publishing).

Kris Vallotton is the founder and overseer of the Bethel School of Supernatural Ministry in Redding, California. He is the Senior Associate Leader at Bethel Church, and has been a part of Bill Johnson's apostolic team for over 26 years. Kris is an internationally recognized prophetic voice, and he and his wife Kathy have trained, developed, and pastored prophetic teams and supernatural schools all over the world. He is a notable speaker with a vision and passion to equip an "Elijah Generation" for the end-times harvest. He has authored numerous books including the best-selling Supernatural Ways of Royalty, as well as Developing a Supernatural Lifestyle, Basic Training for the Prophetic Ministry, and Purity.

Originally from Manchester, UK, Graham Cooke now lives in California. He has been involved in Christian ministry since 1974, and is a popular conference speaker. He also acts as a consultant to churches making the transition to a higher level of vision and ministry. Graham is renowned for his training programs on intimacy with God, spiritual warfare, and moving in the prophetic. He is the author of numerous books, including Permission is Granted to Do Church Differently in the 21st Century with Gary Goodell, A Divine Confrontation, Prophecy and Responsibility, Beholding and Becoming, Towards a Powerful Inner Life, and the series Being With God, The Way Of The Warrior, and Wisdom.

Che Ahn (D.Min., Fuller Theological Seminary) is senior pastor of Harvest Rock Church in Pasadena, California, and founder and president of Harvest International Ministry, a worldwide apostolic network of more than 5,000 churches in more than 34 nations. The author of numerous books including When Heaven Comes Down: Experiencing God's Glory in Your Life; Spirit-Led Evangelism: Reaching the Lost through Power and Love and Close Encounters Of The Divine Kind, Ahn travels and teaches extensively throughout the world.

The Agenda of Angels: What the Holy Ones Want You to Know About the Next Move
Kevin L Zadai
Paperback