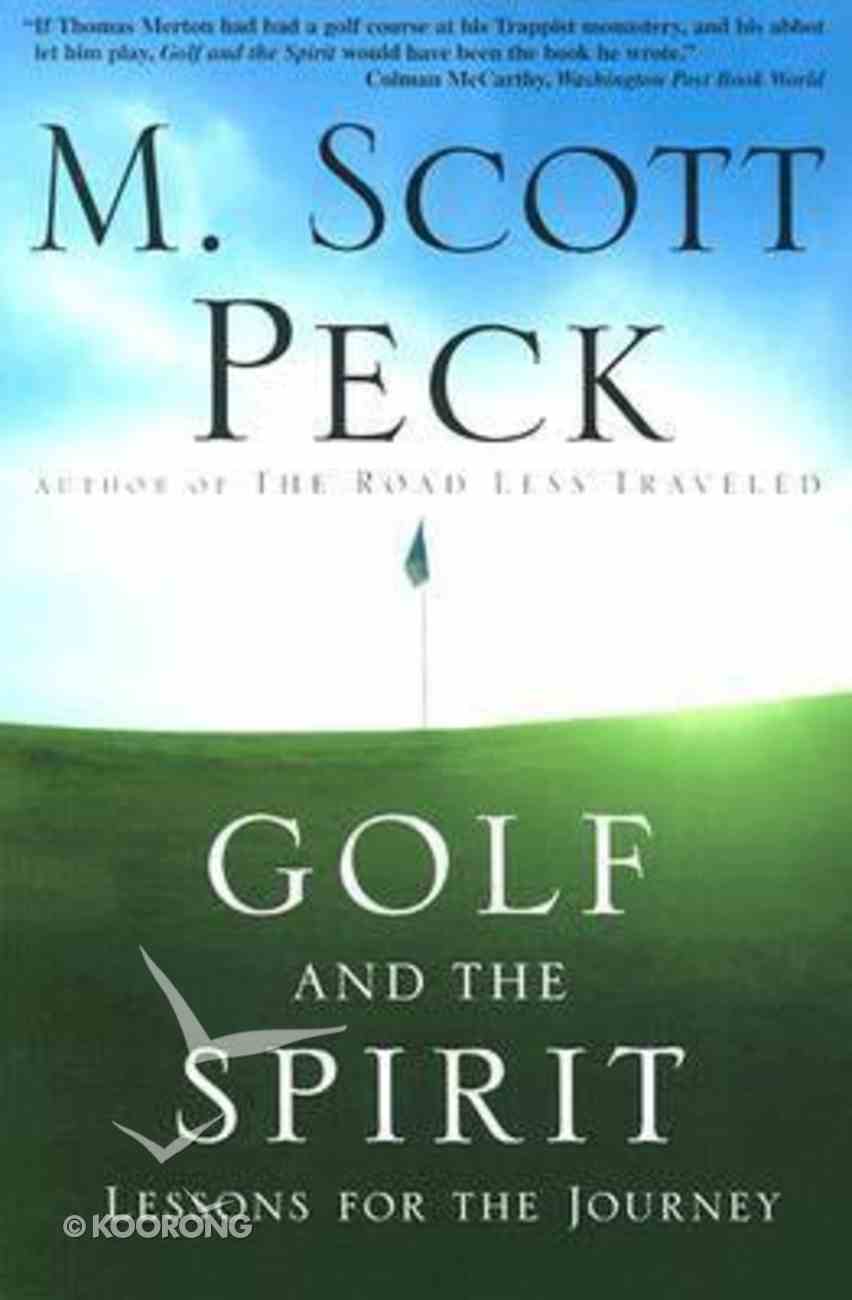 Golf and the Spirit

Golf. It's the ultimate head game. And when nothing but the best advice will do, along comes M. Scott Peck, M.D., the celebrated psychiatrist and author of the best-selling self-help book of all time, The Road Less Traveled. ^In Golf...

Living a Life You Love: Embracing the Adventure of Being Led By the Holy Spirit
Joyce Meyer
Hardback

Rhythms of Rest: Finding the Spirit of Sabbath in a Busy World
Shelly Miller
Paperback

The Seamless Life: A Tapestry of Love and Learning, Worship and Work
Steven Garber
Hardback

Union With Christ: The Way to Know and Enjoy God
Rankin Wilbourne
Paperback

Golf. It's the ultimate head game. And when nothing but the best advice will do, along comes M. Scott Peck, M.D., the celebrated psychiatrist and author of the best-selling self-help book of all time, The Road Less Traveled. ^In Golf and the Spirit, M. Scott Peck writes a book for beginners and masters alike--and even for nongolfers. It goes beyond mechanics to explore the deeper issues, ways of successfully managing the emotional, psychological, and spiritual aspects of this most wonderful, maddening, deflating, and inspiring game. ^Playing side by side with M. Scott Peck on an imaginary course of his own design--complete with illustrations of each hole--you will come to see the profound truths in this seemingly simple game. Appreciate that life is not linear. Come to understand your own anger and how to heal that which gets in your way. Accept the gifts of humility. Appreciate kenosis, the process by which the self empties itself of self. Benefit from teachers. Know that in we
-Publisher

M. Scott Peck, M.D., is the author of several "New York Times" best-sellers, including The Road Less Traveled, which has spent more than ten years on the Times list and is arguably the most influential spiritual book of modern times. He and his wife, Lily, live in northern Connecticut and have been the recipients of several awards for peacemaking.

Once there was a man of limited imagination who considered the progress of life to be straightforward.

HOLE 1
SETTING THE SCENE
To the proverbial man from Mars, golf would seem the most linear of all human activities. For example, it is the only common game I know where the player with the lowest score wins. The whole point, apparently, is to get the ball from here (a tee) to there (a hole in a green) as directly as possible. Generally, it is obvious that the straighter the passage of that little ball from the tee to the hole, the fewer times the player will have to hit it and, hence, the greater her or his sense of accomplishment. Then the golfer will move on to the tee of the next allotted space of terrain (or "hole") and repeat the same linear process all over again. And again. And again.

A few practicing human golfers actually do envision the game in this manner. Usually they are male. They are the "chargers." They advance directly along the course, their eyes only on the hole ahead, plowing forward with maximum speed, as if driven by a mule. They are generally not having much fun. They are also often not playing very well, either.

This is because the reality--unlike the appearance--is that golf is probably the most nonlinear pastime on the face of the earth. This book is devoted to that reality. Consequently, it will be the most nonlinear book I've ever written. For those of you who have trouble tolerating anything that isn't clearly straightforward, I suggest you stop now. Throw in the towel. Quit. And don't look for much from golf.

This is not a "how to" book. You will read herein almost nothing about how to grip a golf club properly, and very little about how to swing one. Or hit from a downhill lie. Or get out of a sand trap with dignity. Moreover, my lawyers have firmly advised me not to give you any guarantee whatsoever that anything I have to say will improve your game by a single stroke.

Human beings have amazingly different personalities. Why this is so--to what degree it is a fact of nature (genes) or nurture (how their parents raised them)--even as an experienced psychiatrist, I don't have the foggiest idea. In any case, certain people--like the pros--seem almost to have been born to play golf well. Others have personalities that make them bound to play the game poorly.

Learning how to play golf with the slightest decency or pleasure has been for me a continual battle against my own personality. This is what has made me an expert. I am an expert on how not to play golf.

Why, you may naturally wonder, would anyone spend an enormous amount of time and money "playing" at something he will never be very good at, something that may often be humiliating? Ah, there you have it. The answer is in the question: I play golf precisely because it is humiliating. While I don't enjoy being humiliated, I do need it.

There's another word for what golfers go through that's even stronger than humiliation: mortification. It is derived from mors, the Latin word for "death," as is the term mortician for "undertaker." To be mortified is to feel so humiliated that you would rather bury yourself deep in the nearest sand trap than ever show your face on a golf course again.

In the good (or not so good) old days, certain Roman Catholic monks and nuns and a few others used to practice mortification as a discipline. They defined it as the discipline of "daily dying." Some of their techniques, such as wearing hair shirts, self-flagellation, and floor licking, were indeed masochistic. Yet I believe they were onto something--something we have generally forgotten but still very much need.

They practiced mortification deliberately in order to learn humility. Another word in theology gets more to the heart of the matter: kenosis. Kenosis is defined as "the process of the self emptying itself of self." In doing battle on the golf course against my own personality--against my ego, if you will--I am attempting to practice kenosis: getting myself out of my own way. It is what spiritual growth is all about.

In this book there will eventually be much more about kenosis, this struggle of self against self. For the moment let it suffice to say that, among other reasons, I play golf because it is for me a highly useful spiritual discipline. Indeed, given the fact that it is so humiliating, I doubt I could play it at all unless I envisioned it as a spiritual discipline. And I am suggesting that you too might want to regard the game in this light.

So what you have here from me is yet one more "spiritual growth" book.

And while there are no guarantees, reading it might just enable you to take a dozen strokes or more off your score. Or at least persist in your attempt to do so. And for some of you, even to take up the game as a beginner.

What's so wrong with my personality that I need to empty myself of parts of it? My anger, just for starters. I am a very determined person. That's not all to the bad, but I tend to get very angry when things don't go just my way.