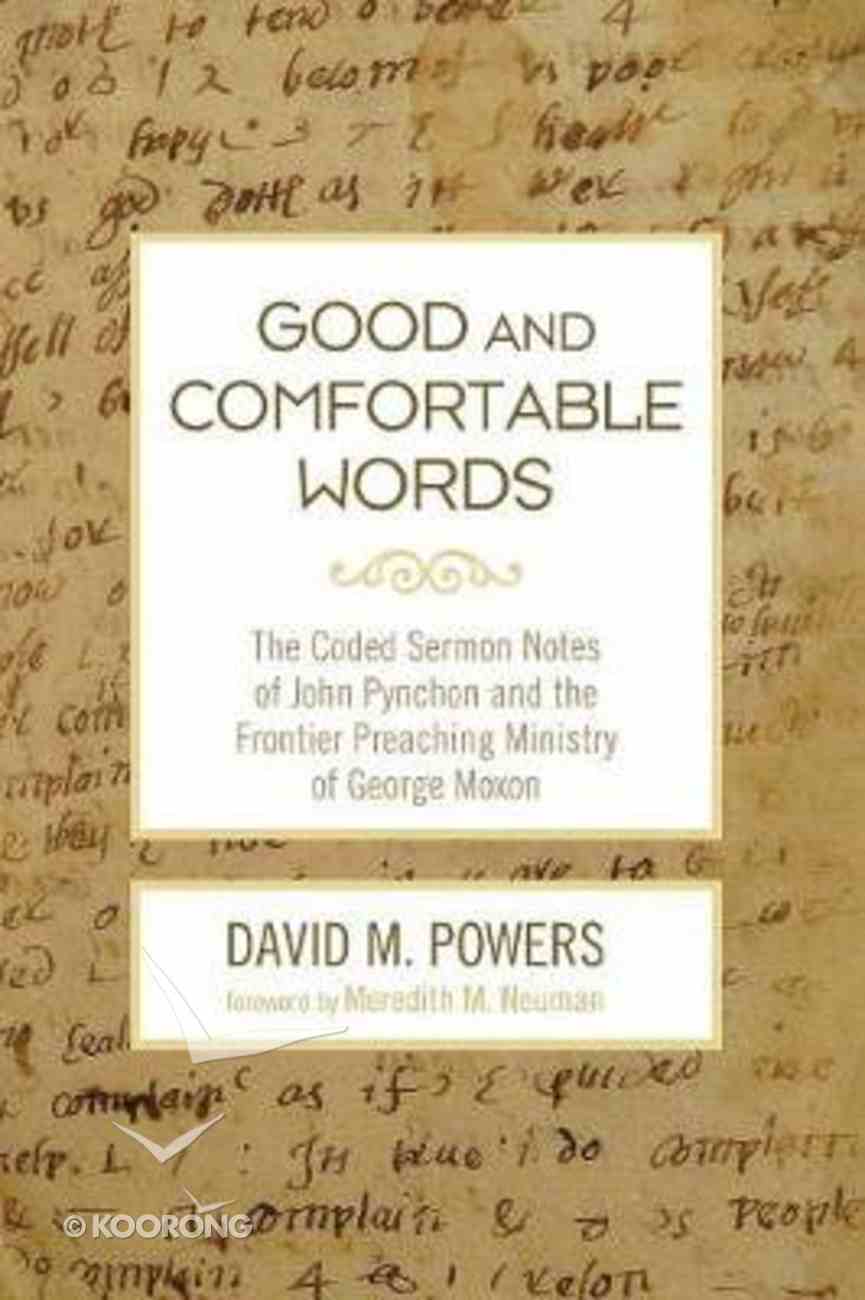 Good and Comfortable Words: The Coded Sermon Notes of John Pynchon and the Frontier Preaching Ministry of George Moxon

Thanks to coded notes taken by the teenager John Pynchon, this volume transports the reader, virtually, back to Sundays in the seventeenth century, when the community gathered to listen to the Rev. George Moxon. The setting was Springfield, Massachusetts, founded...

Preaching as the Word of God
Sam Chan
Paperback

Thanks to coded notes taken by the teenager John Pynchon, this volume transports the reader, virtually, back to Sundays in the seventeenth century, when the community gathered to listen to the Rev. George Moxon. The setting was Springfield, Massachusetts, founded in 1636 by John's father William Pynchon. As a note-taker, John recorded just what he heard in this rare resource, which allows the reader to listen in on the weekly sermons he documented in the 1640s. This symbol-by-symbol transcription into a word-for-word text preserves the character of the minister's original remarks, and reveals Moxon as an able, engaging speaker who offered encouragement--and challenge--to the growing plantation he faithfully served through its earliest years on the edge of a wilderness. Not only do the sermons in this collection provide snippets of popular theological discourse at particular moments in the 1600s; they also point to issues of the day, and they help us get inside the thoughts and word patterns of that era. ""These series of sermons from the 1640s, recorded by Pynchon as Moxon preached, reflect both a particular religious culture and the difficulties faced by the English settlers--an impressive reconstruction. Even more impressive, however, is the work Powers has done to retrieve these words. Deciphering seventeenth-century script is challenging enough, but he has done the hard detective work of figuring out obsolete shorthand systems, and the result is this real national treasure."" --Kenneth Minkema, Executive Editor and Director, Jonathan Edwards Center, Yale University ""A manuscript mystery has been solved, thanks to David Powers. Reading John Pynchon's unique script in notes of sermons from the 1640s caused whole words to leap off the page. But they were surrounded by a maze of indecipherable symbols--a vexing problem for the museum's staff, but an irresistible challenge to David. As a result, we now have a unique perspective into life in early Springfield."" --Maggie Humberston, Head of Library and Archives, Lyman and Merrie Wood Museum of Springfield History, Springfield, Massachusetts ""David Powers' careful, learned, and imaginative scholarship brings us yet another step closer to the lived experience of New England's first settlers. Like no other study, this one takes us right into church and sits us down on a bench; we can almost hear the spoken words of the sermon, still ringing in the ears of the hearers. Powers has provided a unique and valuable addition to our understanding of the ordinary people who made Puritan New England possible."" --Margaret Bendroth, Executive Director, The Congregational Library and Archives, Boston, Massachusetts David M. Powers is a graduate of Carleton College and Harvard University. He is the author of Damnable Heresy: William Pynchon, the Indians, and the First Book Banned (and Burned) in Boston (Wipf & Stock, 2015). He is a native of Springfield, Massachusetts, and lives on Cape Cod.
-Publisher