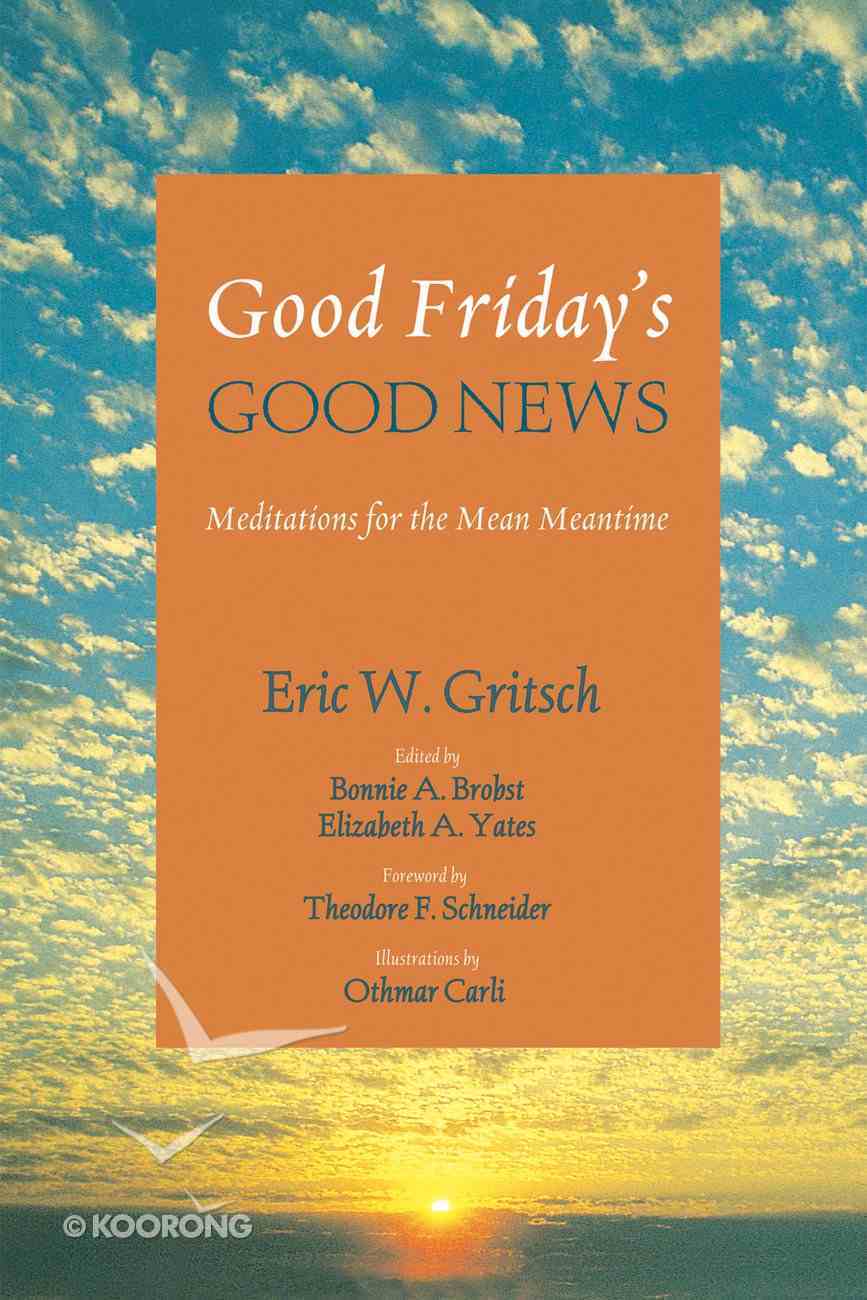 This book is a collection of seven Good Friday homilies by the late Rev. Dr. Eric W. Gritsch. Due to the fact that this respected historian, writer, teacher, and preacher rarely wrote his sermons, this book of printed meditations will...

This book is a collection of seven Good Friday homilies by the late Rev. Dr. Eric W. Gritsch. Due to the fact that this respected historian, writer, teacher, and preacher rarely wrote his sermons, this book of printed meditations will be a treasured addition to any library. Here Gritsch captures the essence of Christian theology, highlighting the concepts with his understanding of human history and human foibles. The insights and wit for which this beloved teacher is known abound in this small volume. In this collection, the seven last words of Christ from the cross are made relevant for those in the twenty-first century who live the daily experiences of their lives trying at all times to be faithful Christians. Page by page the good news of Good Friday is made real! April 9th, 1993, was Good Friday and the anniversary of the execution of Dietrich Bonhoeffer. I sat at the foot of the pulpit for three hours that day taking notes as Gritsch wove the life and death of Jesus and Bonhoeffer into seven sermons of incredible depth. I have often turned to those notes for my personal devotions and inspiration. I commend these sermons to anyone looking for spiritual enrichment in any season of the year. --Ed Harshbarger, retired pastor, ELCA, Chicago, IL Weaving the commemoration of Dietrich Bonhoeffer's death together with anecdotes from his own eventful life, starting as a Hitler Youth 'Werewolf' commanding a unit of children in face of the advancing Red Army, Eric Gritch's Good Friday meditations on the Seven Words from the Cross is at once learned and profoundly evangelical: 'that's the good news, ' so every meditation concludes, of God's new world aborning. --Paul R. Hinlicky, Tise Professor of Lutheran Studies, Univerzita Komenskeho, Bratislava, Slovakia Eric Gritch always said, 'It takes two to gospel.' In these wise and moving sermons, he will be your partner, leading you into the heart of Christ's passion, the wellspring of our redemption. It is wonderful to hear again the voice of this faithful preacher. --Jane E. Strohl, pastor, Zion Lutheran Church, Indiana, PA Eric W. Gritsch was a native of Austria, did his graduate work in Vienna, in Zurich, in Basel, and at Yale, and was Emeritus Professor of Church History at Gettysburg Lutheran Seminary. He was also an ordained pastor in the Evangelical Lutheran Church in America and an author of numerous books, including Martin--God's Court Jester (1983), The Wit of Martin Luther (2006), Toxic Spirituality (2009), Martin Luther's Anti-Semitism (2012), and Christendumb (2013).
-Publisher

Eric W. Gritsch is professor emeritus of church history and former director of the Institute for Luther Studies, both at Lutheran Theological Seminary, Gettysburg, Pennsylvania. His many books include A History of Lutheranism, Martin: God's Court Jester, The Wit of Martin Luther, and Toxic Spirituality: Four Enduring Temptations of Christian Faith.

From Text to Teaching: A Guide to Preparing Bible Talks
David Jackman
Paperback

The Archer and the Arrow: Preaching the Very Words of God
Phillip Jensen, Paul Grimmond
Paperback