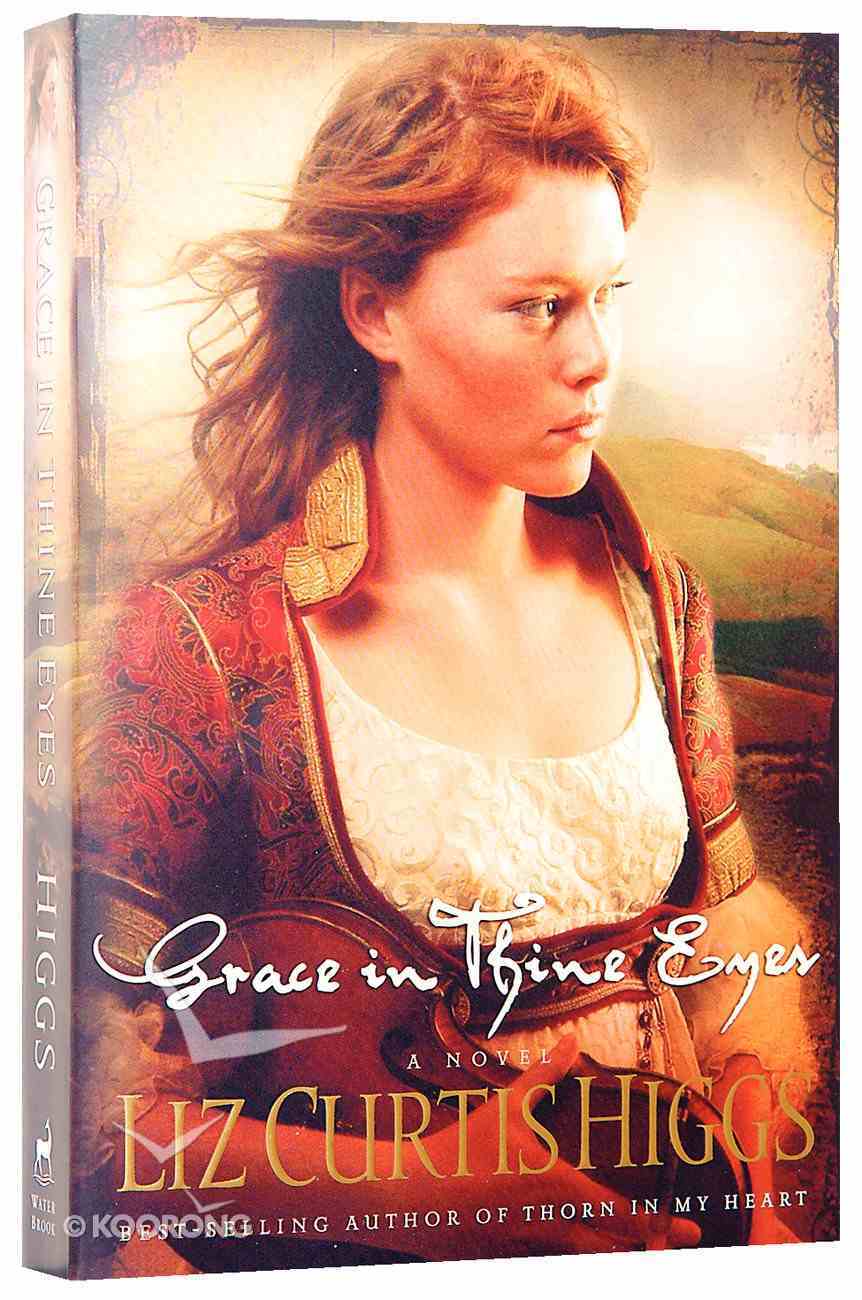 Glen of Loch Trool. Spring 1808. Davina McKie is a bonny lass of seventeen, as clever as they come and a gifted musician. Unable to speak since childhood, she is doted on by her belligerent younger brothers, Will and Sandy,...

Glen of Loch Trool. Spring 1808. Davina McKie is a bonny lass of seventeen, as clever as they come and a gifted musician. Unable to speak since childhood, she is doted on by her belligerent younger brothers, Will and Sandy, who vow to protect their silent sister.

When the lads are forced to depart the glen, Jamie McKie intends to brighten his daughter's summer by escorting Davina to the Isle of Arran. Her cousins make her welcome at the manse, and the parish delights in hearing their talented fiddler.

But when she catches the eye of a handsome young Highlander on Midsummer Eve, sheltered Davina is unprepared for the shocking events that follow.

A timeless story of passion and revenge, of lost innocence and shattered dreams, GRACE IN THINE EYES explores the sorrow of unspeakable shame and the gift of immeasurable grace.
- Publisher.

1. Davina's inability to speak does not hinder her ability to communicate. How would you describe her "voice," her personality? In what ways does her muteness shape the story? Consider the crucial events in Grace in Thine Eyes: If Davina had been able to speak, how might that have changed things? What is your response to the explanation in the author notes for Davina's silence? 2. Are Will and Sandy justified in their overprotective attitude toward Davina? Are they to blame for what happened a decade earlier, or was it simply an accident? In the early chapters did you see the twins as misguided but well meaning, or did they appear cruel? As the novel unfolded, how did your opinion of the twins and their motives change? 3. Jamie McKie has a hard time forgiving his sons. Is his reasoning valid? If you've faced a similar situationbeing asked to forgive a person who deeply wronged someone you lovehow did you handle it? Were there moments in the story when Jamie's behavior angered you? Others when he earned your sympathy? How would you characterize Jamie as a husband? as a father? 4. Unlike her spouse, Leana is patient and grace-giving. In what ways do you admire Leana as a wife? as a mother? How might you identify with her struggles in letting go of her grown children? When does Leana demonstrate her greatest weakness in Grace in Thine Eyes? And when is her greatest strength evident? 5. Leana tells her daughter, "Have I ever seen a fairy? Only when I look at you, lass." According to Eve Blantyre Simpson in Folk Lore in Lowland Scotland (1908), a learned Scotsman was asked if he believed in fairies. "The Highlander replied as gravely as if his confession of faith had been challenged, 'Of course I do.'" How do you reconcile people with strong religious beliefs also embracing fairies, kelpies, brownies, and the like? Did you find the fairy lore in this novel fascinating or unsettling? How might such references to the wee folk serve the story and the characterization of Davina in particular? 6. The epigraphs that open each chapter are meant to prepare the reader for what's to come. How might the words of Samuel Coleridge at the start of chapter 22 describe what follows with the twins? Select an epigraph that you particularly like. Why did it capture your fancy, and how does the quote suit the chapter it introduces? 7. Somerled MacDonald shows his rakish side from the moment we meet him in chapter 28. Describe your initial impression of Somerled. In what ways did your assessment of his character change as the story progressed? Did he ever win your heart, as he does Davina's? Why or why not? 8. Is the tragedy on Midsummer Eve inevitable? Davina blames herself as well as Somerled. Is she right in doing so? Do you see her as naive, flirtatious, foolish, or the sad victim of a crime? Sir Harry claims, "In a plight such as this, society punishes the woman far more than the man." That was so in 1808. Is it still true today? What emotions did those harrowing scenes evoke for you? 9. The aftermath is painful to witness. What circumstances make those first hours especially difficult for our dear Davina? If you'd been there as her mother or her friend, how might you have counseled or consoled her? If you'd been Davina, given all the limitations of her situation, what might you have done the next morning? 10. Graceoften defined as "unmerited favor"is not only part of the title but also the theme of Grace in Thine Eyes. What do you make of Davina's eventual willingness to extend grace to Somerled? Is her mercy commendable or appalling? Contrast Jamie's stubborn attitude toward forgiveness with Davina's generous one. Must a person be worthy of forgiveness before receiving it? How does accepting the gift of undeserved mercy change people? 11. Chapter 65 shows us Will's nature at its basest. Do his efforts at the last redeem him in your sight? Why or why not? What do you make of Sandy's actions in the final, harrowing moments? Despite the clear foreshadowing, were you hoping for a better outcome on Goatfell? How did you feel when Somerled slipped from Will's grasp? 12. Jamie is furious with himself and with his sons, clenching his fists and shouting, "What am I to do with you?" Who is truly at fault for the Goatfell incident? When the family meets with Mr. Hunter, Jamie lies to protect them. As a parent, would you do the same in such a situation? When Will and Sandy return to Glentrool at Yuletide, what do you think should happen to them? 13. Though Davina leaves Arran behind, she cannot escape the judgment of others. If you've ever been wrongly accused, as she was, how did you feel? What did you do? In what ways does gossip still have the power to wound and isolate us? Other than seeking the support of friends, how might one rise above such false accusations 14. Graham Webster has many heroic attributes, yet Davina is not initially attracted to him. Why might that be so? How does his personality compare to Somerled's? What qualities does Graham have to recommend him? Can you imagine his making Davina happy? How long might it take for her heart to be truly whole? 15. This reader's guide begins with a quote from Amos Bronson Alcott, a nineteenth-century American teacher and philosopher. Only readers can determine if a book is good or not. What expectation did you have when you began reading Grace in Thine Eyes? What surprised you? dismayed you? pleased you? What were your hopes for Davina at story's end? Finally, how did you profit from reading this novel?
-Publisher

"That is a good book which is opened with expectation and closed with profit." - Amos Bronson Alcott
-Publisher

No doubt they rose up early to observe
The rite of May.
WILLIAM SHAKESPEARE