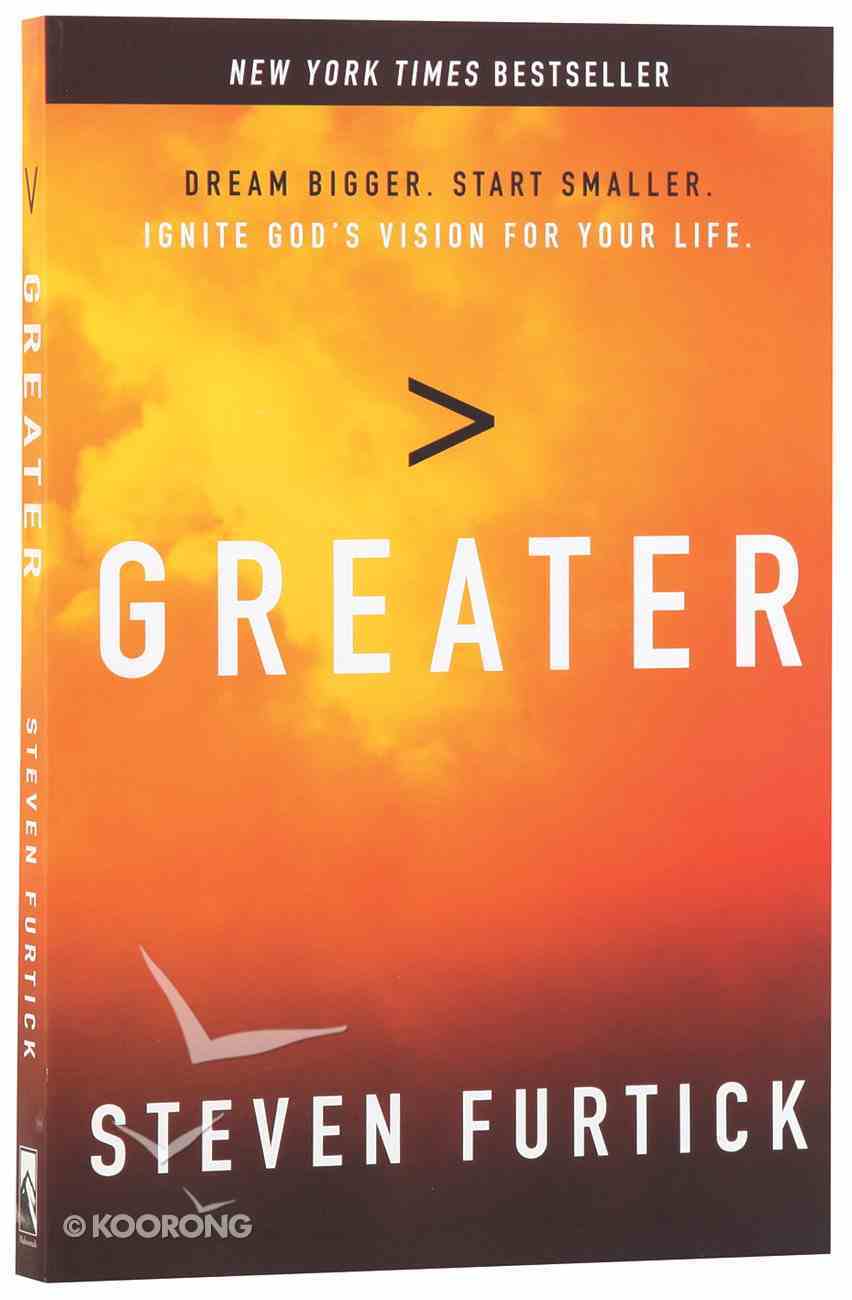 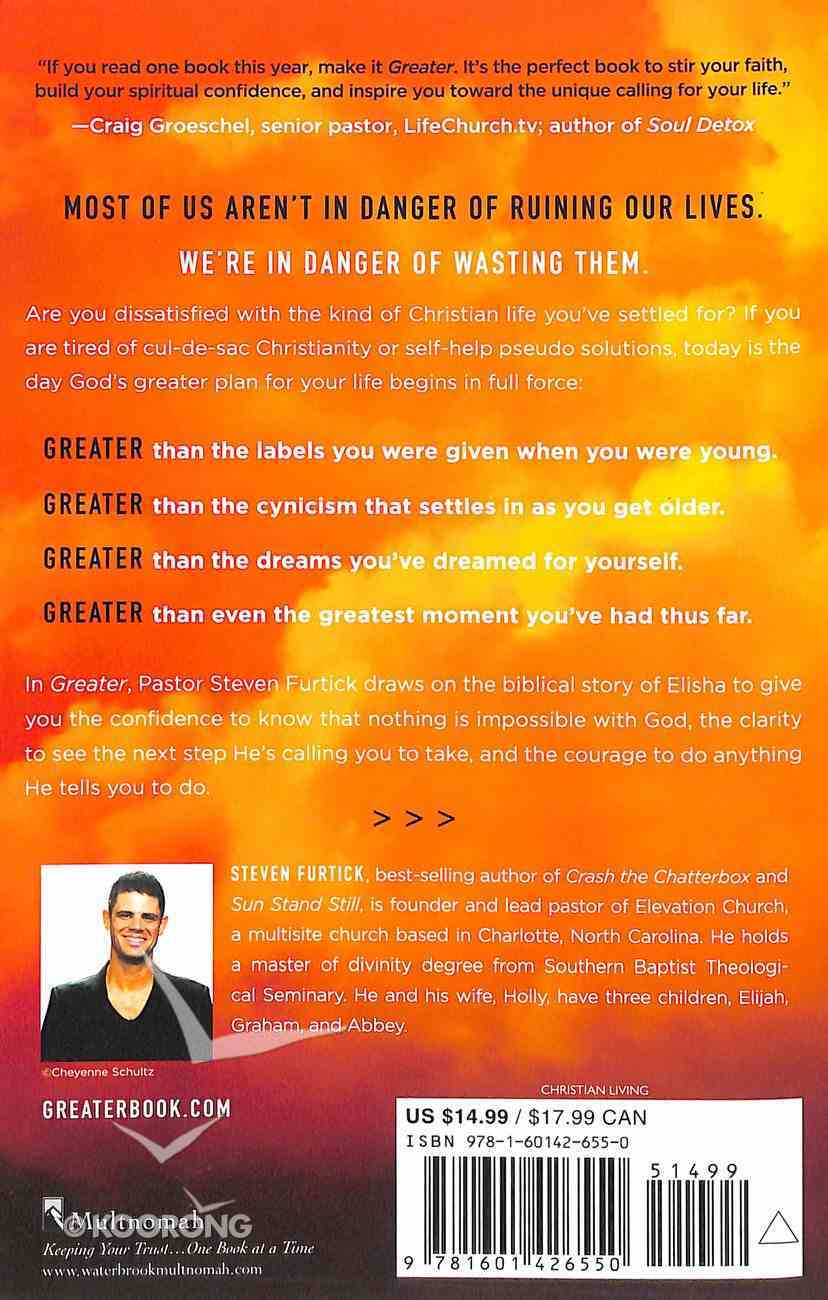 Steven Furtick draws on the story of Elisha to empower you to take a God-given dream from idea to reality, to stretch your resources and abilities in ways you never thought possible, to replace the images of yourself that keep...

Seven-Mile Miracle: Journey Into the Presence of God Through the Last Words of Jesus
Steven Furtick
Paperback

Crash the Chatterbox: Hearing God's Voice Above All Others
Steven Furtick
Paperback

Through the Eyes of a Lion
Levi Lusko, Steven Furtick
Paperback

Sun Stand Still: What Happens When You Dare to Ask God For the Impossible
Steven Furtick
Paperback

Steven Furtick draws on the story of Elisha to empower you to take a God-given dream from idea to reality, to stretch your resources and abilities in ways you never thought possible, to replace the images of yourself that keep you stuck in the past, and to make an impact with your life, starting today!

Are you ready to open your imagination to the possibility that God has a vision for your life that is "greater"?We all have honest moments when we're gripped by a desire to feel that what we're doing matters more. That who we "are" matters more. And according to one of the most shocking verses in the Bible, Jesus wants the very same thing for "every one "of us: ""Very truly I tell you, whoever believes in me will do the works I have been doing, and they will do even greater thingsthan these, because I am going to the Father."" -John 14:12That single promise--"even greater things than these"--should be enough to shatter our acceptance of spiritual mediocrity. Unfortunately, most believers have only tried and given up on vague notions of "greatness..."then settled into a life that's just "good enough."Good enough = Baseline living that is marked by mediocrity, stuck in spiritual survival mode, and controlled by complacency.Greatness = Vague, unrealistic aspirations of doing better that don't work in real life and lead to endless frustration.But there is a third way.Greater = The life-altering understanding that God is ready to accomplish a greatness in your life that is entirely out of human reach--beyond anything you see in yourself on your best day, but exactly what God has seen in you all along. In "Greater, "Pastor Steven Furtick draws on the biblical story of Elisha to empower you to: - Take a God-given dream from idea to reality - Stretch your limited resources and abilities in ways you never thought possible - Replace the images of yourself that keep you feeling stuck in the past - Make a significant impact with your life starting today, rather than making endless plans for tomorrow that you never get around to If you're tired of being ordinary, it's time to dream bigger. If you're feeling overwhelmed about where to begin, it's time to start smaller. It's time to ignite God's "Greater" vision for your life.
-Publisher

Pastor Steven grew up in Moncks Corner, South Carolina, where at age 16 he realized God's plan for him to start a life-changing church in a metropolitan city.

This vision became a tangible reality when Elevation was founded on the faith of eight families who risked everything. Selling their houses and quitting their jobs, they moved to Charlotte believing that God would turn this city upside down for His glory through the local church.

After nearly five years, Elevation Church has grown to more than 8,000 in attendance each week at four locations. Since our launch, we've seen more than 10,900 people receive Christ. In 2007, 2008 and 2009, Elevation Church was named one of the "10 fastest growing churches in America" by Outreach Magazine.

The heart of Pastor Steven's message is audacious faith and how to approach every experience from a visionary perspective. As a young voice in the Church with wisdom beyond his years, his passion for seeing God's purposes fulfilled is igniting a fire here in our city and beyond.

Pastor Steven attended North Greenville University, received a B.A. in communications and went on to complete a Master of Divinity from Southern Baptist Theological Seminary.

He resides in the Charlotte area with his wife, Holly, and two sons, Elijah and Graham.

:Steve and Me
I used to want to do great things for God. That was before I found something greater.

My mom says she&rsquo;ll always remember that she was sitting in a social studies class when the loudspeaker beeped and crackled and someone announced that President John F. Kennedy had been shot. All the kids would be going home for the day.

I wonder if I&rsquo;ll always remember that my two sons and I had just shared kung pao shrimp at P.F. Chang&rsquo;s when I
stopped in my tracks on the way out the door. I had to&#160;make sure I had correctly read the words that were scrolling across every television within sight:

I can&rsquo;t explain why, but my hands were shaky and sweaty as I pulled my iPhone out of my pocket to verify.

One of the first things I saw was a statement from President Obama. He said that Steve Jobs &ldquo;was among the greatest of American innovators.&rdquo; That &ldquo;he transformed our lives, redefined entire industries, and achieved one of the rarest feats in human history: he changed the way each of us sees the world.&rdquo;

Then I looked at my Twitter time line to see what the rest of the world was saying about Jobs. Everybody seemed to be weighing in. The outpouring was overwhelming.

&ldquo;R.I.P. Steve Jobs. You led the world into the 21st century.&rdquo;

&ldquo;R.I.P. Steve Jobs. You improved life as we know it.&rdquo;

&ldquo;Steve Jobs&mdash;On behalf of every dreamer sitting in his or her garage who is crazy enough to try to change the world, you will be missed.&rdquo;

I suddenly felt the urge to tweet my own thoughts about his passing. But it felt melodramatic for me to share some deep thought about a person I&rsquo;d never met. Still, he was the greatest business leader of my lifetime. So I fired off a three-word tweet:

My next thoughts made my stomach hurt. Or was it the kung pao? Either way, I got downright introspective. I was
wrestling with a tension:

Steve Jobs was a great man. He changed the world through technology.

I&rsquo;m a pastor. I have a mission to change the world through the gospel.

But am I really achieving that mission? I&rsquo;m doing well by some standards, I guess.

I love Jesus. I have integrity. I love my family.

I&rsquo;m not redefining an industry. I&rsquo;m not accomplishing one of the greatest feats in human history. So what am I really doing? That matters? That will matter?

That will set my life apart?

In short, I was processing the nauseating feeling that, when I stack it all up, I don&rsquo;t feel like I&rsquo;m anything close to being the great man of God I want to be. Some days, actually, I feel like I sort of suck as a Christian. I didn&rsquo;t tweet any of that. But I couldn&rsquo;t stop thinking it.

I&rsquo;m guessing you&rsquo;ve had thoughts like that too. I&rsquo;m not saying you want to be the next Steve Jobs or build your own
technology empire. But I think we all have these honest&#160;moments when we&rsquo;re gripped by a desire to feel that what we&rsquo;re doing matters more. That who we are matters more. A few hours later, after I tucked my boys into bed and
prayed for them, I sat on my bed and opened my MacBook.

For some reason I felt compelled to pull up a certain Bible verse. It&rsquo;s one of the most staggering statements Jesus ever made.

I tell you the truth, anyone who has faith in me will do what I have been doing. He will do even greater things than these, because I am going to the Father. (John 14:12)

I&rsquo;d read that verse so many times. But I had a new context for it.

Does it mean that we&rsquo;re able to do more powerful miracles than Jesus? Have a bigger impact than Jesus? I don&rsquo;t think so. After all, I don&rsquo;t know many people who have walked on water, multiplied fish and loaves to feed thousands, opened the eyes of the blind, or given salvation to the world.

If you&rsquo;re looking to be greater than Jesus, put down your crack pipe, my friend. That&rsquo;s not happening.

By leaving and then sending His Spirit to dwell inside His followers&mdash;ordinary people like you and me&mdash;Jesus released a
greater power for us to do extraordinary things on an extraordinary scale. The kinds of things the early church saw and did.

The kinds of things He still wants to do today through us. Jesus isn&rsquo;t calling us to be greater than He is.

He&rsquo;s calling us to be greater with Him through His Spirit within us.

As I tried to process the brain-bending implications of that claim, I thought through some conversations I&rsquo;d had recently with people who were feeling disappointed and stuck in their relationship with God and their place in life.

I&rsquo;m meeting more and more believers who are unsatisfied with the kind of Christians they&rsquo;re becoming and the version of the Christian life they&rsquo;re experiencing. These aren&rsquo;t bad people. They aren&rsquo;t gangbangers and ungodly pagans. If they were, their discontent would make more sense.

The thing is, most believers aren&rsquo;t in imminent danger of ruining their lives. They&rsquo;re facing a danger that&rsquo;s far greater:
wasting them.

These are some of the very people Jesus talked about in John 14:12. People who are supposed to be doing greater works than&mdash;forget about Steve Jobs&mdash;Jesus Christ Himself.

Yet it&rsquo;s not happening. For most of us, the experience of our daily lives is a far cry from the greater works Jesus talked about in John 14:12. Or even the achievements of a luminary like Steve Jobs.

We&rsquo;ve had some big dreams about what God might want for our lives. But so many of us are stuck in the starting blocks. Or are dragging along at the back of the pack.

We know we were meant for more. Yet we end up settling for less.

We&rsquo;re frustrated about where we are. But we&rsquo;re confused about how to move forward.

I wonder if you can relate.