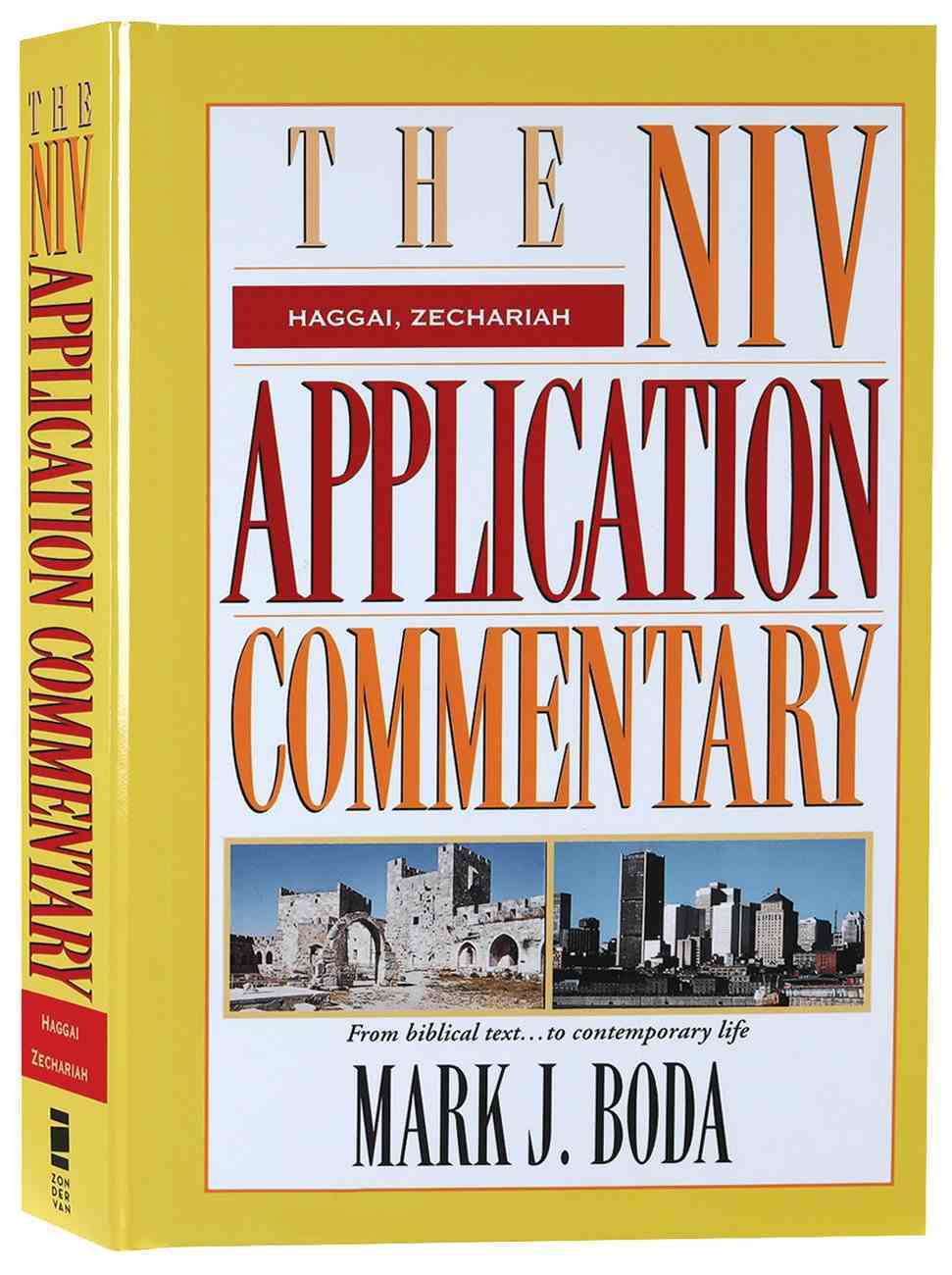 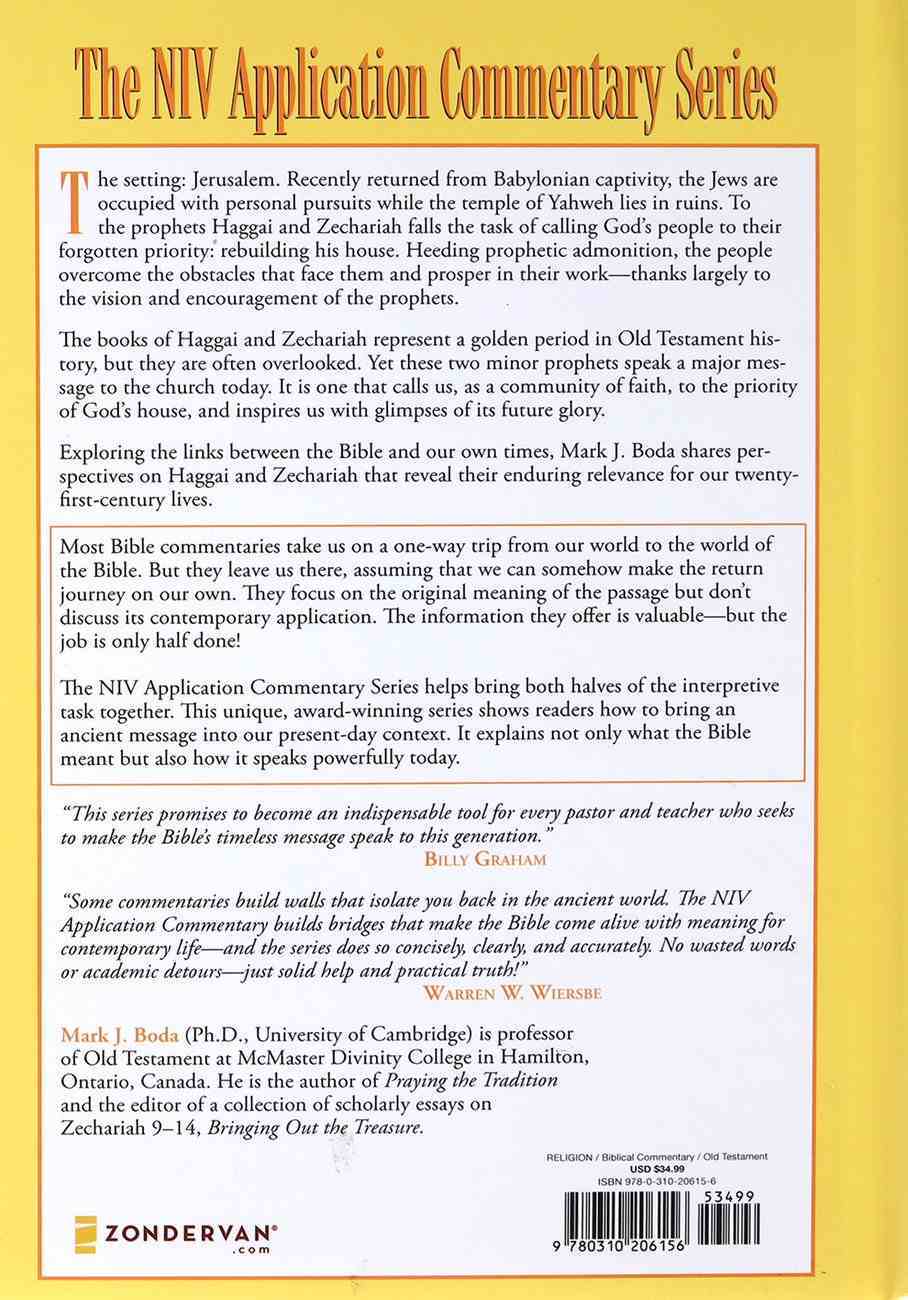 Haggai/Zechariah, which is part of the NIV Application Commentary Series, helps readers learn how the message of these two prophets who challenged and encouraged the people of God after the return from Babylon can have the same powerful impact on...

14 available
Expected to ship within 7 hours from Australia.
Learn More
Free Shipping
for orders over $99.

Haggai/Zechariah, which is part of the NIV Application Commentary Series, helps readers learn how the message of these two prophets who challenged and encouraged the people of God after the return from Babylon can have the same powerful impact on the community of faith today.

How the message of these two prophets impacts the community of faith today.

The prophet Haggai was consumed with rebuilding the temple in Jerusalem and preached on the universal implications of obedience. Zechariah called his own stubborn generation to repentance and encouraged leaders and people to pursue a renewal of community with purity and passion. The many references to the books of Haggai and Zechariah in the New Testament show how their themes apply to the contemporary life of faith.
- Publisher.

The NIV Application Commentary SeriesThe setting: Jerusalem. Recently returned from Babylonian captivity, the Jews are occupied with personal pursuits while the temple of Yahweh lies in ruins. To the prophets Haggai and Zechariah falls the task of calling God's people to their forgotten priority: rebuilding his house. Heeding prophetic admonition, the people overcome the obstacles that face them and prosper in their work--thanks largely to the vision and encouragement of the prophets.The books of Haggai and Zechariah represent a golden period in Old Testament history, but they are often overlooked. Yet these two minor prophets speak a major message to the church today. It is one that calls us, as a community of faith, to the priority of God's house, and inspires us with glimpses of its future glory.Exploring the links between the Bible and our own times, Mark J. Boda shares perspectives on Haggai and Zechariah that reveal their enduring relevance for our twenty-first-century lives.Mos
-Publisher

The NIV Application Commentary: Haggai, Zechariah Copyright 2004 by Mark J. Boda Requests for information should be addressed to: Zondervan, Grand Rapids, Michigan 49530 Library of Congress Cataloging-in-Publication Data Boda, Mark J. Haggai, Zechariah / Mark. J. Boda. p. cm.-(The NIV application commentary) Includes bibliographical references (p. ) and indexes. ISBN: 0-310-20615-4 (hardcover) 1. Bible. O.T. Haggai-Commentaries. 2. Bible. O.T. Zechariah-Commentaries. I. Title. II. Series. BS 1655.53.B63 2004 224'.97077-dc22 2004005204 CIP This edition printed on acid-free paper. All Scripture quotations, unless otherwise indicated, are taken from the Holy Bible: New International Version. NIV. Copyright 1973, 1978, 1984 by International Bible Society. Used by permission of Zondervan. All rights reserved. The website addresses recommended throughout this book are offered as a resource to you. These websites are not intended in any way to be or imply an endorsement on the part of Zondervan, nor do we vouch for their content for the life of this book. All rights reserved. No part of this publication may be reproduced, stored in a retrieval system, or transmitted in any form or by any means-electronic, mechanical, photocopy, recording, or any other-except for brief quotations in printed reviews, without the prior permission of the publisher. Printed in the United States of America 04 05 06 07 08 09 /.DC/10 9 8 7 6 5 4 3 2 1 We want to hear from you. Please send your comments about this book to us in care of zreview@zondervan.com. Thank you. Introduction to Haggai and Zechariah IN HIS 1956 BOOK Everyday Life in Old Testament Times, E. W. Heaton provides an artistic illustration of the exiles of Judah marching under armed Babylonian guard through the famous Ishtar gate of Babylon. Underneath the picture is the caption: "The Closing Scene of Old Testament Times: The Babylon of Nebuchadnezzar." This title captures the sentiments of many readers of the Old Testament, that after the destruction of Jerusalem the story of redemption fades into the haze of exile only to reappear with the birth of Christ in the New Testament. There is no question that most of the events of Israel that are fixed in the cultural consciousness of the church happened prior to the fall of Jerusalem in 587 B.C., such as the call of Abraham, the rise of Joseph, the exploits of Samson, the victories of David, or the proclamations of Elijah. The period in which Haggai and Zechariah lived and ministered, therefore, does not receive much attention in Christian circles. A preference for the earlier stories of Israel is apparent for several reasons. (1)With the fall of Jerusalem in 587 B.C. the Israelites did not regain independence from foreign powers until the Maccabean revolt. Even the province in which part of the Jewish remnant lived was a mere fraction of its size under David and Solomon. This does not make for great storytelling, although Daniel and Esther enjoy some popularity. (2) The New Testament accounts of Jesus and Paul portray the leadership of the Jews (the Sadducees, Pharisees, and teachers of the law) in a negative light. These various groups arose in the period between the Babylonian destruction of Jerusalem and the birth of Christ, and thus the literature from this period is read through the lens of the New Testament critique of these groups. Books like Ezra and Nehemiah are disparaged for their close attention to the law. (3) The rebuilding of the temple and the city of Jerusalem is seen as odd in light of Christ's coming. Why rebuild the temple only to have it rejected by Christ in his ministry? These factors introduce us to some of the major hurdles for preaching and teaching on Haggai and Zechariah. In order to appropriate the rich theology of these books for contemporary audiences, we need to overcome these challenges. The purpose of this introduction is to provide historicall
-Publisher