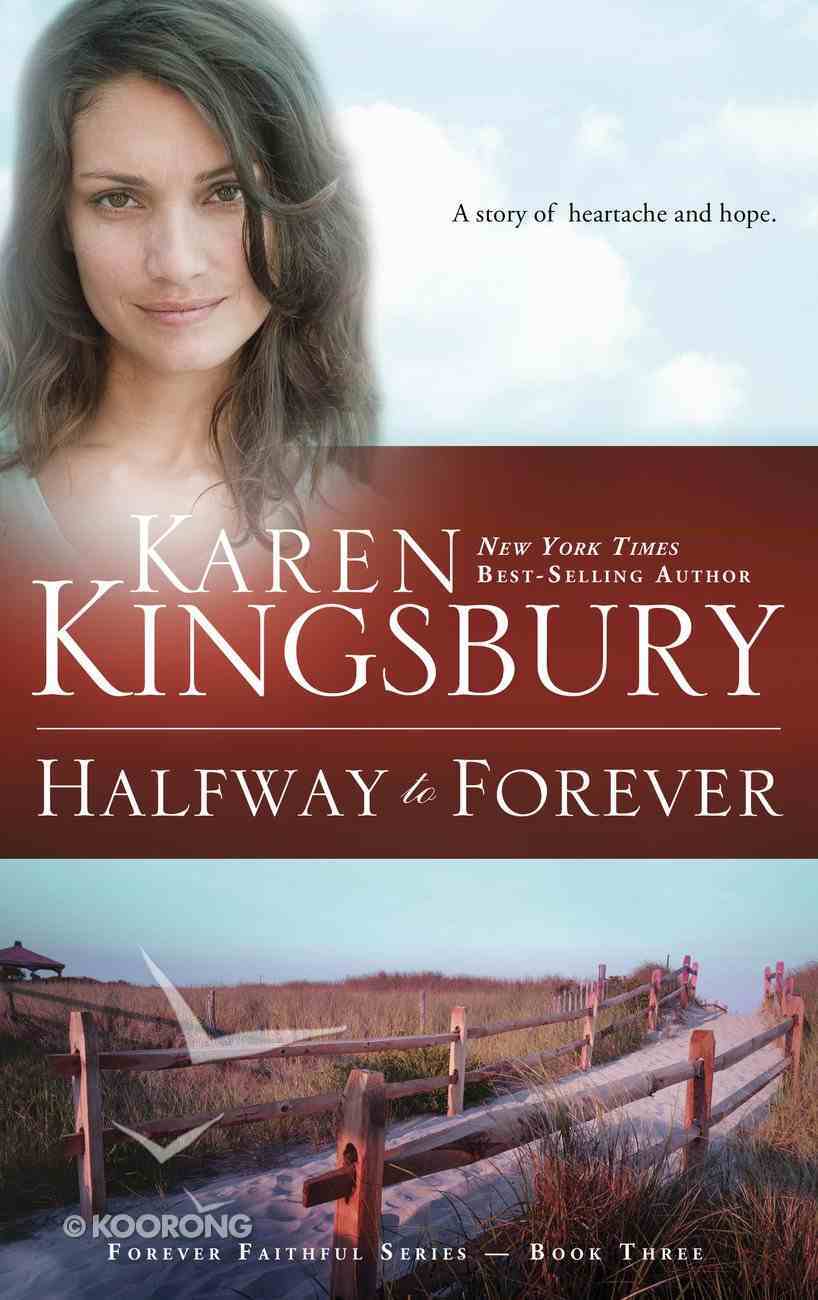 Matt and Hannah Bronzan have found a new life in the face of devastating loss. Together with Hannah's daughter, Jenny, they are finally moving forward-toward the adoption of a little girl. A younger sister for Jenny, a daughter for them...

To the Moon and Back
Karen Kingsbury
Paperback

This Side of Heaven
Karen Kingsbury
Paperback

Matt and Hannah Bronzan have found a new life in the face of devastating loss. Together with Hannah's daughter, Jenny, they are finally moving forward-toward the adoption of a little girl. A younger sister for Jenny, a daughter for them to love and raise together. But just when the dream seems to be coming true, disaster strikes. Can Hannah survive the loss of another daughter?

Jade and Tanner Eastman love the Bronzans. Matt and Tanner are partners in a successful religious freedom law firm, and the two couples share a great deal. Not the least of which has been Jade and Tanner's struggle to have children. When they discover Jade is pregnant, their joy is boundless. Until the joyous event becomes a threat to Jade's very life. Will Tanner come through decades of loneliness only to face losing Jade one final time?

You wept with them as they were Waiting for Morning
You shared their Moment of Weakness
Now they face the greatest struggles of their lives.

Matt and Hannah Bronzan have found a new life in the face of devastating loss.  Together with Hannah’s daughter, Jenny, they are finally moving forward—toward the adoption of a little girl. A younger sister for Jenny, a daughter for them to love and raise together. But just when the dream seems to be coming true, disaster strikes. Can Hannah survive the loss of another daughter?

Jade and Tanner Eastman love the Bronzans. Matt and Tanner are partners in a successful religious freedom law firm, and the two couples share a great deal. Not the least of which has been Jade and Tanner’s struggle to have children.  When they discover Jade is pregnant, their joy is boundless. Until the joyous event becomes a threat to Jade’s very life. Will Tanner come through decades of loneliness only to face losing Jade one final time?

The grassy knolls and quiet, sad whispers were not necessary for her to remember Tom and Alicia, because they did not live in the confines of a garden of stone, but in Hannah&rsquo;s heart.

Where they would always live.

But on this day, Hannah climbed out of the car, slipped on her sunglasses, and gazed across a sea of cold, gray tombstones. Her heart ached as she drew a slow, shaky breath.

Much as she didn&rsquo;t want to be here, it was time. Despite the emotions warring within her, Hannah knew she had no choice. She needed to come now, just as she&rsquo;d needed to come two years ago when Matt Bronzan asked her to be his wife.

By then she had grieved the loss of her first husband, and with a strength that was not her own, she&rsquo;d survived. Enough to tell Matt yes, to believe there was indeed a new life for her and young Jenny on the other side of a darkness and pain that had nearly destroyed them both.

Coming here had been difficult back then too, but it had given her a chance to say good-bye to Tom, to thank him for all they&rsquo;d shared, and to release him. To let die a flame she thought would burn forever. Hannah set her gaze in the direction of their tombstones and pulled her sweater tighter.

Her eyes welled up. Now it was time to let go of Alicia.

This was a private moment&mdash;one she needed to share with Tom and Alicia alone. Regardless of shaded grounds, the glasses would stay. She walked amidst the markers, her fingers brushing against an occasional cold stone as she made her way across the cemetery to the place where their markers lay, side by side.

Her eyes drifted from one to the other. Dr. Thomas J. Ryan&hellip;Alicia Marie Ryan. The birth dates were different, but the date of death was the same: August 28, 1998.

A lump formed in Hannah&rsquo;s throat, and she swallowed hard as she knelt down, sitting back on her heels. She wiped an errant tear from her cheek&hellip; Alicia would have been nineteen, finished with high school and making her way through college. In love, perhaps, or dreaming of a career.

Alicia. I miss you, baby&hellip;

It was harder to picture them now, harder to see the crisp definition in her mind&rsquo;s scrapbook&hellip;how Tom&rsquo;s eyes sparkled when she was in his arms, or the way Alicia&rsquo;s smile lit up a room&hellip;

They&rsquo;d lost so much in one terrible moment. A drunk driver, an awful collision&hellip;and the life she and Tom had spent years building was shattered.

Hannah exhaled, and the sound mingled with the breeze. You can do this. She squeezed her eyes shut, searching for the strength to move ahead. She and Matt had worked out the plans for more than a year. It was the right thing, she was sure of that much. Even now, with sadness covering her heart like a blanket, she could feel the excitement welling within her, convincing her that somehow, sometime soon, it would happen.

She would be a mother again.

&ldquo;Hi&hellip;&rdquo; She set her fingertips on Alicia&rsquo;s tombstone and dusted off a layer of dirt. &ldquo;I have something to tell you.&rdquo;

A crow sounded in the distance. This visit was for peace of mind and nothing more. Hannah&rsquo;s precious oldest daughter would never have questioned her intentions, never have doubted her place in Hannah&rsquo;s heart. Her fingers stopped moving and settled over Alicia&rsquo;s name.

&ldquo;Matt and I have decided to&hellip;to adopt a little girl.&rdquo; Her voice broke, and from behind her sunglasses tears trickled down her face and dripped off her chin.

She waited until she could find her voice. &ldquo;After&hellip;after the accident I couldn&rsquo;t imagine ever loving another man,&rdquo; Hannah wiped the back of her hand across her wet chin. &ldquo;Or another daughter.&rdquo; A sound that was part laugh, part sob slipped from her lips. &ldquo;But here I am, happy, married, and&hellip;convinced God has another daughter for me somewhere out there.&rdquo;

The traffic hummed from the road behind her. &ldquo;You understand, right, Alicia? I&rsquo;m not trying to&hellip;to replace you, honey.&rdquo; She sniffed. &ldquo;The bond you and I shared, the one you and Jenny shared, that&rsquo;s something none of us will ever have again. Not like it was.&rdquo;

Hannah paused and gazed up, willing herself to see beyond the blue to the place where Tom and Alicia now lived and loved and laughed.

Gradually her eyes shifted back to the tombstones. &ldquo;I saw a documentary last night about kids in America, kids waiting for someone to love them, and&hellip;I don&rsquo;t know&hellip; something inside me snapped.&rdquo; She shrugged and managed a smile despite the fresh tears on her cheeks. &ldquo;I can&rsquo;t have more babies. We&rsquo;ve known that since Jenny was born. But adoption?&rdquo; She sniffed. &ldquo;I wasn&rsquo;t sure I could do it&hellip;until last night. Then, all of a sudden, I knew. I could open my heart to another little girl.&rdquo;

The background noise faded. Hannah traced the A in Alicia&rsquo;s name, pushing away the dirt that had gathered there. &ldquo;We&rsquo;ll adopt a toddler, someone who needs a second chance at life.&rdquo; She blinked, and two more tears slid off the tip of her nose onto Alicia&rsquo;s stone. &ldquo;I don&rsquo;t know where she is&hellip;or who she is. But I know she&rsquo;s out there somewhere. And I wanted you to know bec&ndash;&rdquo;

There was a catch in Hannah&rsquo;s voice, and she held the sobs at bay. &ldquo;Because she&rsquo;ll be your sister.&rdquo;

Hannah closed her eyes again and waited. The image of her oldest daughter grew clear in her mind once more. &ldquo;Alicia&hellip;&rdquo;

There she was. The smile, the honey blonde hair, the warmth in her eyes&hellip;it was all as close and real as if she were standing there in person.

There were no words, but a distinct sense of approval pierced the darkness. The feeling swelled, and Hannah had no doubts. God wanted her to know Alicia would have supported this decision with her whole being.

Hannah ached to reach out and pull the image of her daughter close, but the lines began to blur. As they did, peace oozed between the cracks in Hannah&rsquo;s heart. It was okay to let her daughter&rsquo;s memory fade for now. The visit had reminded her once more that she no longer needed to feel the pain of Alicia&rsquo;s and Tom&rsquo;s deaths with every excruciating breath, but only as a sad truth that simply was and could not be changed.

Hope wrapped its arms around her as she opened her eyes. It was time to go home, time to let Matt and Jenny know what she&rsquo;d decided. Of course, Jade and Tanner Eastman would want to know, too. The couple had become their best friends these past years. They&rsquo;d been there while Matt and Hannah walked through a year of collecting documents and filling out adoption forms, gathering letters and completing a dossier.

The Eastmans understood. They were desperate to have a baby, but so far hadn&rsquo;t been able.

Despite Hannah&rsquo;s tears, a smile tugged at her lips. Yes, Jade and Tanner would be thrilled that Hannah was finally ready to move forward.

She let her eyes settle on Tom&rsquo;s tombstone. &ldquo;Pray for us, Tom.&rdquo; Two tears landed near his name, and she wiped her cheeks with her fingertips. &ldquo;Pray for the little girl&hellip;whoever she is.&rdquo;

Once more she looked back at the stone, at Alicia&rsquo;s name carved in it. &ldquo;One more thing, honey. When we bring her home and&hellip;and people ask me how many girls I have&hellip;&rdquo; Hannah wiped at her tears again. &ldquo;I&rsquo;ll always tell them three. Two who live here with me&hellip;and one who lives in heaven.&rdquo;