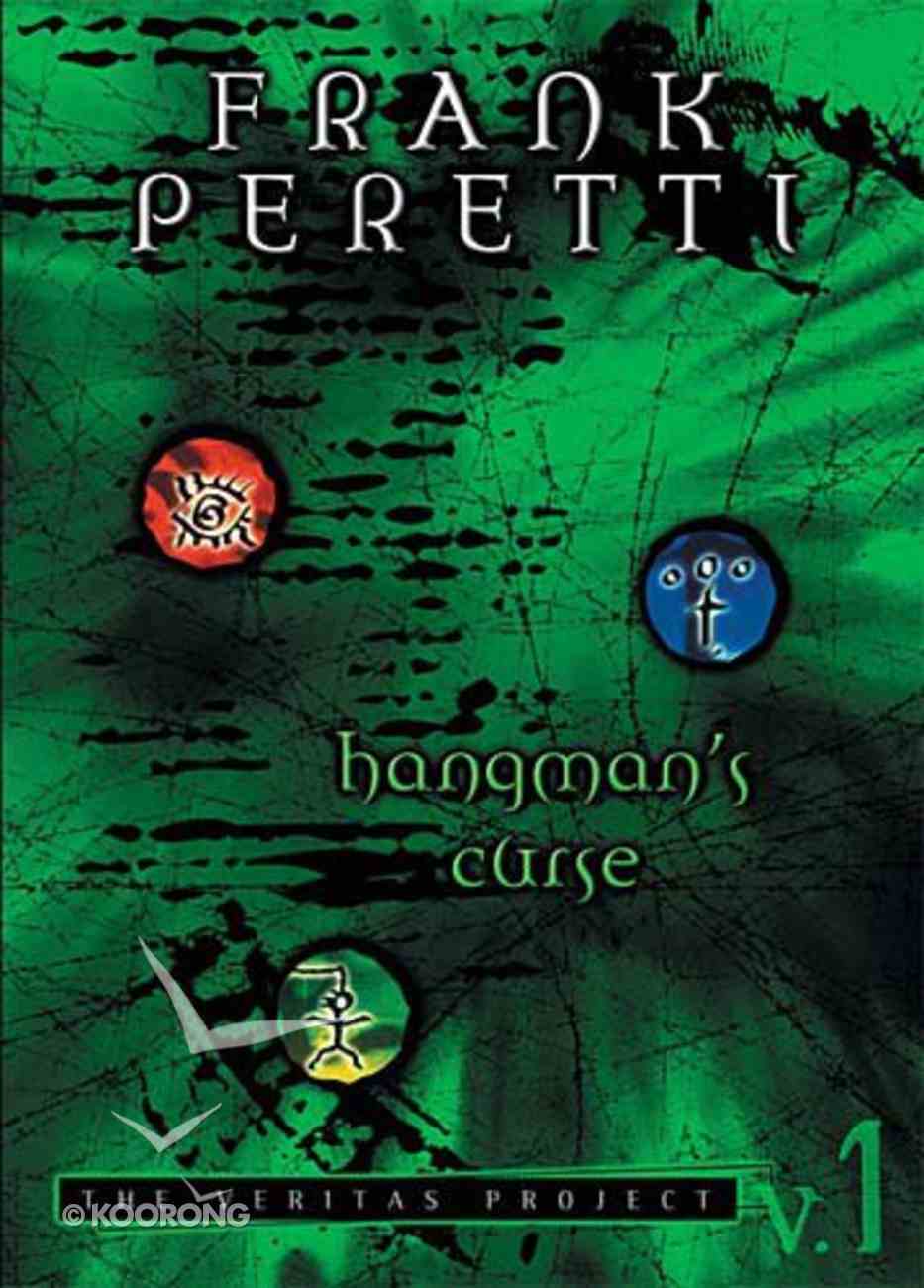 Join Nate and Sarah Springfield and their twins Elijah and Elisha as they go undercover at a small town high school. A mysterious curse seems to have sent several star football players insane. Ages 10+. 288 pages.

Join Nate and Sarah Springfield and their twins Elijah and Elisha as they go undercover at a small town high school. A mysterious curse seems to have sent several star football players insane. Ages 10+. 288 pages.

The first in a new format of books targeted to tweens and teens, The Veritas Project: Hangman's Curse will keep readers enthralled. Frank Peretti introduces Nate Springfield, his wife Sarah, and their twin children Elijah and Elisha, who are part of the Veritas Project team. This group travels the country aiding the FBI and other organizations in breaking drug rings and solving mysteries. In Hangman's Curse, the family goes undercover at a small town high school - where a mysterious curse has turned several of the star football players into raving lunatics who can only be tied to their hospital beds while doctors are baffled by their symptoms. Elijah and Elisha must befriend the various cliques at school, and help their parents solve the mystery of Abel Frye (a name the sick kids mutter in their delirium).^This story could have come straight from the headlines about many schools around the country and will lead kids and young adults to an understanding of peer pressure and the pain
-Publisher

CHAPTER ONE: CHAPTER ONE: Baker High School quarterback Jim Boltz wiped his hands on his jersey, angrily this time. He'd almost fumbled the snap again, the third time in the first quarter. His hands were slick with sweat. They were shaking. He clenched them into fists. "Y'okay, Jim?" asked the center. "M'okay!" he snapped back. He was looking bad; he knew it and his team knew it. He had to get it together, had to quit missing, dropping, forgetting. This was an important game, Baker against Whitman. The Baker High School stadium was filled to capacity. He took his place in the huddle, his stomach in knots. "Okay, uh, double-wide right, tight end left, 755 fly, on one. Ready . . ." "We just did that play," said Dave, one of the wide receivers. Jim stared at the turf. He was thinking about breathing. Howie suggested, "How about power-I right, play action 242 . . ." Jim's brain finally snapped into gear. "Uh, yeah, yeah, uh, tight end down and out, on two. Ready . . ." "Break!" they all yelled. The huddle broke and they headed for the line of scrimmage. Jim forgot the play. He tagged his fullback and got a reminder. "Ready, set, red twenty-one, red twenty-one, red twenty-two, hut, HUT!" He got the snap, faded back, looked for his receiver, saw a face in the stands . . . The face was pale. The eyes were cold and cruel, and they gazed at him unblinkingly. Jim's hand trembled. He almost dropped the ball. "Why's he standing there?" Coach Marquardt growled from the sidelines. Still in his midtwenties, Marquardt was all meat, no fat, and tough enough to scare any kid within range of his glare. "Boltz! Wake up and throw the ball!" Jim threw the ball. It wobbled in a pitiful, lazy arc over the line of scrimmage and bounced far short of the receiver. The play was over, and it was sheer luck the ball wasn't picked off by a linebacker. This time, Gordon, the center, got right in his face. "Jim, what's the problem? Hey, I'm talking to you!" Jim was eyeing that face in the stands. "Sleazy little wimp!" The center turned to follow Jim's gaze. "Who?" "He's gonna pay for this." Gordon was still looking. "Who?" Jim turned toward the huddle. "C'mon." It was fourth down on Whitman's 24-yard line and Baker had four yards to go for a first down. Jim took some deep breaths. It had to be exhaustion. Maybe it was the stress of playoffs coming up. With two more wins, they'd go to the state championship game on Turkey Day, the big one. That could be doing it. Maybe it was a touch of the flu, or something he ate. It could be anything. Anything but- Fear. Uh-uh. No way. Not me, not here, not now, and not from that little creep in the stands. He looked at those distant black eyes and mouthed the words, I'm not afraid of you! Ian Snyder sat hunched like a vulture in row twelve on the far end of the bleachers, dressed in black, the only color he owned. The seats all around him were vacant. After three miserable years in high school, he was used to it. He was enjoying every moment of watching Baker High's star quarterback fall apart. The searing, demonic smile never left his face. Oh, you're scared, all right. I can see it in the way you keep looking this way and keep blowing this football game. I've got you right where I want you, don't I? "Abel Frye," he whispered, his eyes gleaming like the silver pendant that hung from his left ear. "Abel Frye." Jim Boltz shook off the weakness, clamped his hands together to keep them steady, and called for one more pass play, a last-ditch attempt to make that first down. The Baker Hawks went to the scrimmage line; he took the snap, faded back- His arm faltered in midthrow. Someone was standing in the end zone. Abel Frye. The name reverberated like
-Publisher