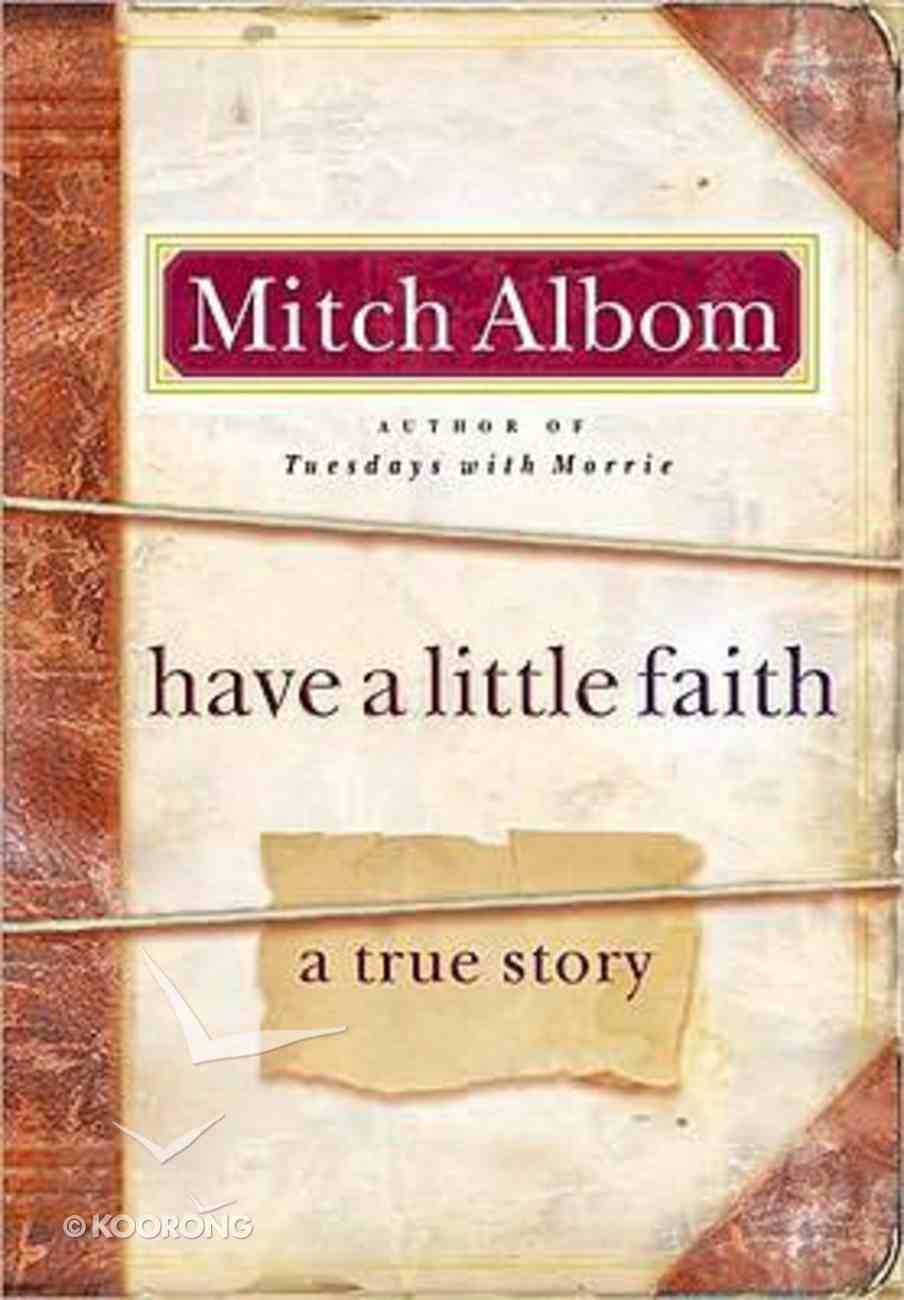 Have a Little Faith

"Clear some space on your bookshelf for Mitch Albom's, Have a Little Faith , the story of a faith journey that could become a classic. Those who were born into faith, have lost faith, or are still searching will all...

Walking With Henry: Big Lessons From a Little Donkey on Faith, Friendship, and Finding Your Path
Rachel Anne Ridge
Hardback

Just a Little Girl: How a Clinical Death Brought a Teenage Girl Face-To-Face With An Angel and Head-To-Toe With Her Faith
Sarvadi Victoria, Allison Bottke
Paperback

Walking With Henry: Big Lessons From a Little Donkey on Faith, Friendship, and Finding Your Path
Rachel Anne Ridge
Paperback

"Clear some space on your bookshelf for Mitch Albom's, Have a Little Faith, the story of a faith journey that could become a classic. Those who were born into faith, have lost faith, or are still searching will all be engaged and challenged by this powerful story of "finding faith" in relationships with others and with something greater than ourselves. Never satisfied with easy answers or soft platitudes, Mitch explores some of life's greatest mysteries and unanswered questions with great honesty, depth and self reflection. "
--Jim Wallis, CEO and Founder of Sojourners and author of The Great Awakening
What if our beliefs were not what divided us, but what pulled us together


Albom's first nonfiction book since Tuesdays with Morrie, Have a Little Faith begins with an unusual request: an eighty-two-year-old rabbi from Albom's old hometown asks him to deliver his eulogy.


Feeling unworthy, Albom insists on understanding the man better, which throws him back into a world of faith he'd left years ago. Meanwhile, closer to his current home, Albom becomes involved with a Detroit pastor--a reformed drug dealer and convict--who preaches to the poor and homeless in a decaying church with a hole in its roof.


Moving between their worlds, Christian and Jewish, African-American and white, impoverished and well-to-do, Albom observes how these very different men employ faith similarly in fighting for survival: the older, suburban rabbi embracing it as death approaches; the younger, inner-city pastor relying on it to keep himself and his church afloat.


As America struggles with hard times and people turn more to their beliefs, Albom and the two men of God explore issues that perplex modern man: how to endure when difficult things happen; what heaven is; intermarriage; forgiveness; doubting God; and the importance of faith in trying times. Although the texts, prayers, and histories are different, Albom begins to recognize a striking unity between the two worlds--and indeed, between beliefs everywhere.


In the end, as the rabbi nears death and a harsh winter threatens the pastor's wobbly church, Albom sadly fulfills the rabbi's last request and writes the eulogy. And he finally understands what both men had been teaching all along: the profound comfort of believing in something bigger than yourself.


Have a Little Faith is a book about a life's purpose; about losing belief and finding it again; about the divine spark inside us all. It is one man's journey, but it is everyone's story.


Ten percent of the profits from this book will go to charity, including The Hole In The Roof Foundation, which helps refurbish places of worship that aid the homeless.

Mitch Albom writes for the Detroit Free Press, and has been voted America's No. 1 sports columnist ten times by the Associated Press Sports Editors. Albom, a former professional musician, hosts a syndicated daily radio show and appears regularly on ESPN's The Sports Reporters. He is the author of Bo and Fab Five, both national bestsellers, and has also published four collections of his columns. He lives with his wife, Janine, in Michigan.