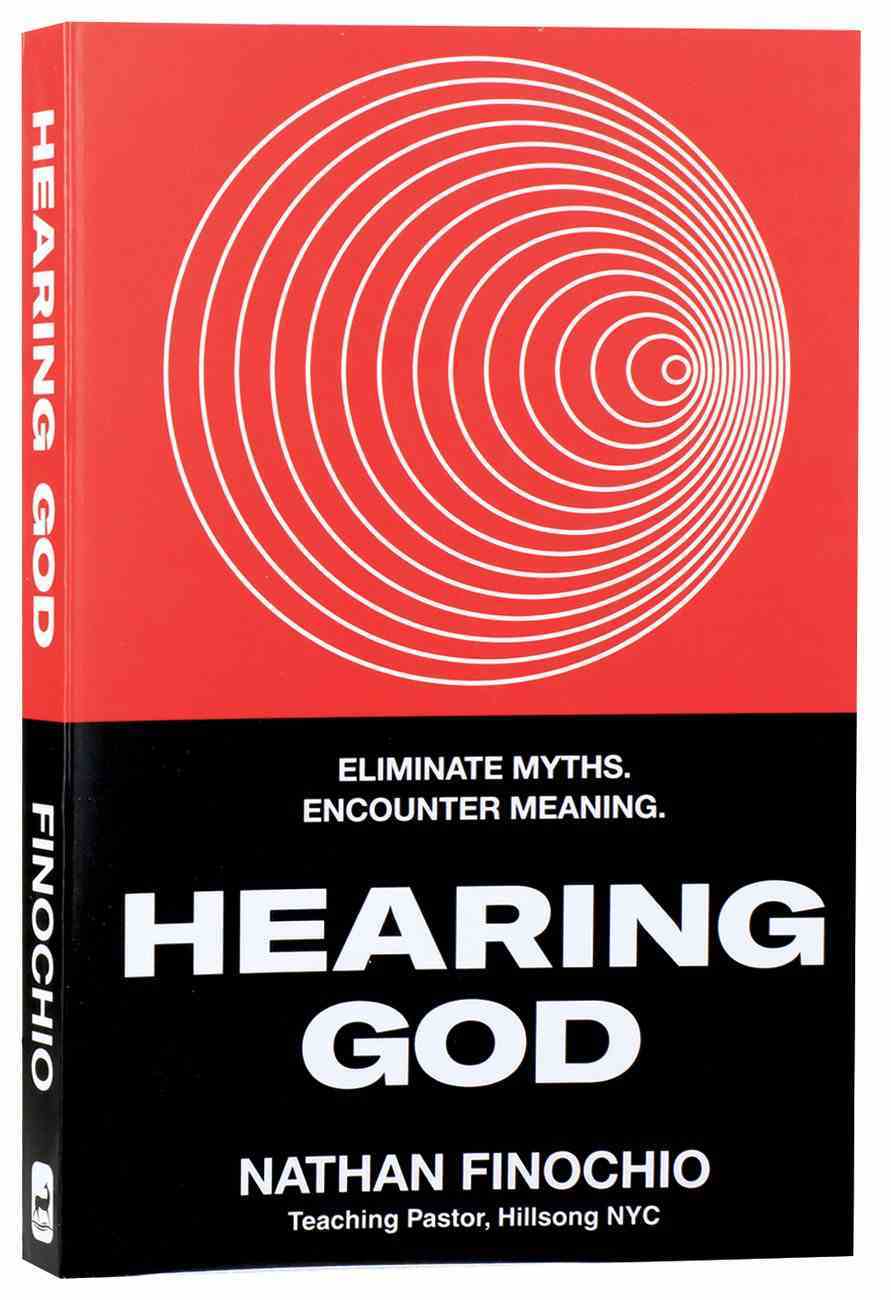 Hearing God: A Guide to Figuring Out What He's Saying to You

Hillsong New York City pastor identifies and deconstructs the most common myths about how God communicates - and then provides clear tools to accurately decipher and follow the voice of God in your life. So many people wish that...

Guidance and the Voice of God: God's Living Word Will Show You Where to Go (Guidebooks For Life Series)
Phillip Jensen, Tony Payne
Paperback

Medium Framed Print: Feathers - He Will Cover You With His Feathers Psalm 91:4
Plaque

Hillsong New York City pastor identifies and deconstructs the most common myths about how God communicates - and then provides clear tools to accurately decipher and follow the voice of God in your life.

So many people wish that God would audibly weigh in on life's greatest questions of calling, meaning, and purpose. What's crazy is that God is weighing in on those questions. We just haven't learned to listen. Nathan Finochio believes that God is constantly communicating with this world he's created. We simply aren't following the right advice when it comes to hearing what he has to say. Through biblical teaching and true life stories, Hearing God empowers and enables readers to separate fact from fiction, myth from meaning, and truly understand what God is saying to them about big decisions and daily living.

Hillsong New York City pastor identifies and deconstructs the most common myths about how God communicates - and then provides clear tools to accurately decipher and follow the voice of God in your life. So many people wish that God would audibly weigh in on life's greatest questions of calling, meaning, and purpose. What's crazy is that God is weighing in on those questions. We just haven't learned to listen. Nathan Finochio believes that God is constantly communicating with this world he's created. We simply aren't following the right advice when it comes to hearing what he has to say. Through biblical teaching and true life stories, Hearing God empowers and enables readers to separate fact from fiction, myth from meaning, and truly understand what God is saying to them about big decisions and daily living.
-Publisher

NATHAN FINOCHIO is a teaching pastor at Hillsong New York City. In addition to teaching, preaching, and writing, Nathan is a worship leader and songwriter for the band The Royal Royal. Finochio lives in New York with his wife, Jasmine.

:
Chapter One: The Myth of Easy Conversation


Sometimes when my wife, Jasmine, talks to me, I feel a bit like a conversational Indiana Jones. Deep beneath the ancient sands, I&rsquo;m trying to make out the hieroglyphics that hold the information I need. The secret must be here! I think, frantic. The treasure!


In this example, I ask what&rsquo;s wrong, and she responds with &ldquo;Nothing.&rdquo; What she&rsquo;s really saying is precisely the opposite, that there is indeed something wrong and that I&rsquo;m in a relational minefield. Explosives are hidden, and I must throw out every possible &ldquo;Is it&hellip;?&rdquo; or &ldquo;Did I&hellip;?&rdquo; scenario until I hit the mine. Boom.


Now let&rsquo;s say that Jasmine answers &ldquo;It&rsquo;s fine.&rdquo; With the correct tonal inflection, this means nothing is fine. Everything has gone to the dogs. The world is about to end. I brace for impact and begin to apologize for anything that comes to mind, including the sins of my childhood.


Admittedly, we&rsquo;ve been married for only five years, and we do still have a ton to learn about communication. But we are learning, slowly. It&rsquo;s not that Jasmine is bad at communicating; she&rsquo;s great. And it&rsquo;s not that I&rsquo;m bad at listening. But I&rsquo;m still learning to listen to her. She&rsquo;s not a high-maintenance person&mdash;quite the opposite. Our goal is to converse more effectively. Why is that necessary? Because we&rsquo;re different as people.


The good news is that difficulty doesn&rsquo;t doom possibility. As my relationship with Jasmine grows, so does my understanding of how she talks. How she expresses herself is not what I am used to. Okay. Buck up, Nathan!


Through time spent, understandings, and misunderstandings, I&rsquo;ve had to unlearn certain meanings of words and tones and learn Jasmine&rsquo;s. And she&rsquo;s had to learn mine. It&rsquo;s taking longer than I had hoped, but it&rsquo;s happening in the context of relationship, and it&rsquo;s clarifying over time. I&rsquo;m still not perfect, and I still have a long way to go. That process of &ldquo;two becoming one&rdquo; and &ldquo;blending&rdquo; plays out over a lifetime. But in the end&mdash;if we&rsquo;re diligent&mdash;I&rsquo;m sure we&rsquo;ll be finishing each other&rsquo;s&hellip;


Here&rsquo;s the point: conversation grows as we do. Maturity and experience are linked to communication. If Jasmine and I get to our fiftieth wedding anniversary and we&rsquo;re still exactly where we were at our fifth, something&rsquo;s wrong. Why? Because relationships should grow.


If a conversation is all about the will, needs, wants, and life of one person, it&rsquo;s a monologue. Yet that&rsquo;s how many of us think about our conversations with God. Either they&rsquo;re all about us (this kind of crazy focus on me, me, me) or all about Him (this kind of crazy focus on theology and His will that never considers that we&rsquo;re real people too). Both views are immature on our part.

It&rsquo;s All Who You Know


Consider the type of revelation John the apostle had about Jesus and relate that to his proximity to Jesus. John was probably Jesus&rsquo;s best friend. He was the last of the twelve disciples at the cross and the first one at the grave. John took care of Jesus&rsquo;s mother, Mary, after Jesus&rsquo;s death&mdash;at Jesus&rsquo;s request. John laid his head on Jesus&rsquo;s breast at the Last Supper. Five times in his gospel, John calls himself the one whom Jesus loved. It was his identity. And in this gospel, we have the most intimate glimpse of Jesus. About 80 percent of the material is also unique, telling us things the other three gospels don&rsquo;t. We get an in-depth, transparent picture of Jesus&mdash;aside from what we see in the incredible (and terrifying) book of Revelation, which begins with a vision of Jesus in crazy power and glory.


It&rsquo;s easy to hear all that and think Goody for John. Must be great. So&hellip;what am I supposed to do? Here&rsquo;s what: Start by understanding that Jesus desires closeness and intimacy with you. Understand that, through the Holy Spirit, that kind of relationship is possible, and that just as in relationships with friends and spouses, that relationship can grow in intimacy.


If that&rsquo;s true, then there&rsquo;s hope for each of us to learn how to hear what God is truly saying. We can understand. He wants us to. But don&rsquo;t take my word for it.


To begin with, read the Acts passage that opens this chapter. Jesus, resurrected, reveals Himself to the disciples and hangs out with them over a period of forty days, speaking about the kingdom of God (Acts 1:3). Don&rsquo;t you wish they had recorded that discussion? Think about it. The risen Jesus is doing some crazy explaining to the disciples, filling in the gaps of what they didn&rsquo;t understand about His death and resurrection. Not only has He been with these guys for more than three years&mdash;healing people, walking on water, showing them unparalleled signs, and telling secrets about Himself&mdash;but now He&rsquo;s just been raised from the dead. He is Next-Level Jesus; He is Death-Defying Jesus; He is Walk-Through-Walls Jesus. And He&rsquo;s explaining both Himself and the kingdom of God to them in a fuller, more robust way. All this is amazing, but what happens next is mind blowing.


Here&rsquo;s how the Finochio Amplified Version tells the story:


They&rsquo;re all at some secret, Jesus-followers-only location, and Jesus is thinking, Perfect&mdash;I&rsquo;ve just come back from the dead and have spoken to my future church planters about the kingdom at length. They get it! Now I&rsquo;m gonna go to the Father. Everything is perfect&mdash;mission accomplished.


Jesus looks down at the ground, about to engage thrusters and blast off into the clouds, but just as He says Launch! internally and begins to lift into the air, the disciples grab His ankles and yell, &ldquo;Wait! We have one more question!&rdquo; Jesus is four feet off the ground, and they&rsquo;re holding Him like small children gripping clusters of helium-filled balloons.


Okay&mdash;so maybe it wasn&rsquo;t quite like that. Just humor me for a minute.


Hovering above the sand, Jesus answers, &ldquo;What is it? What could I have possibly left out?&rdquo;


The disciples answer, &ldquo;Lord, will You at this time restore the kingdom to Israel? Is that what You&rsquo;re floating off to do? Destroy the Romans and Herods in an air assault? Should we meet You at the palace or temple, where You&rsquo;ll assume command of the country and sit on the throne of Israel as the rightful heir of the Davidic dynasty? And do we all get sweet rings of power and large country estates from which we rule and reign over our beloved country with You?&rdquo;


Jesus sinks down like a deflated balloon and somewhat impatiently exclaims, &ldquo;Look, it&rsquo;s not for you to know what the Father is doing with respect to all that stuff. And yes, you&rsquo;ll receive power&mdash;when the Holy Spirit has come upon you. Then you&rsquo;ll be My witnesses in Jerusalem and throughout the world. Like I said before, it&rsquo;s better that I go so that you have the Paraclete with you. He&rsquo;s going to help you understand all this stuff you&rsquo;re a bit hazy on, and even more! I&rsquo;m out of here, guys. Peace!&rdquo;


After Jesus whips up into heaven, the disciples are all looking up like children who lost balloons, in a mix of befuddlement and grief. Two angels appear immediately as the guys are gazing into the distance, wondering what just happened.


&ldquo;Guys? Um, Jesus is gone. What are you staring at? Jesus will return the same way, so maybe stop staring so hard at the clouds, &rsquo;cuz He isn&rsquo;t coming back right this moment. Go chill in Jerusalem and wait like He said.&rdquo;


The Gospels culminate in the total victory of Jesus and the almost-total failure of His disciples. The beginning of the book of Acts continues that narrative: Jesus is constantly explaining Himself and the kingdom of God to the disciples, and the disciples are constantly missing everything He&rsquo;s communicating. But that same book of Acts shows this formerly wavering, dense, and impulsive group transformed into bold leaders and witnesses through the power Jesus promised. God&rsquo;s fullest revelation of Himself is given to His friends, to those with whom He has close relationship. They are then asked to take it to others&mdash;everywhere. But it doesn&rsquo;t get off to the smoothest start, does it?