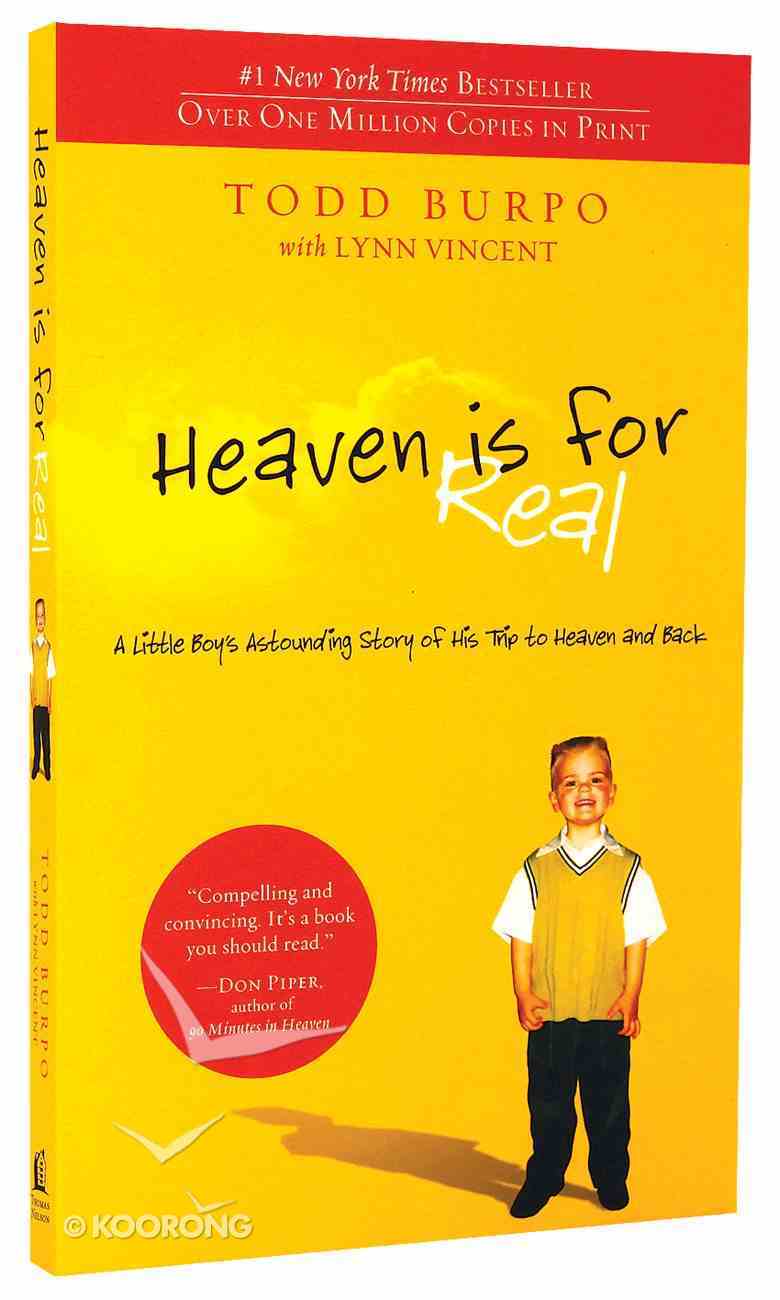 Heaven is For Real

A young boy emerges from life-saving surgery with remarkable stories of his visit to heaven. Heaven Is for Real is the true story of the four-year old son of a small town Nebraska pastor who during emergency surgery slips from...

God is For Real: And He Longs to Answer Your Most Difficult Questions
Todd Burpo, David Drury
Paperback

My Journey to Heaven: What I Saw and How It Changed My Life
Marvin J Besteman, Lorilee Craker
Paperback

A young boy emerges from life-saving surgery with remarkable stories of his visit to heaven.

Heaven Is for Real is the true story of the four-year old son of a small town Nebraska pastor who during emergency surgery slips from consciousness and enters heaven. He survives and begins talking about being able to look down and see the doctor operating and his dad praying in the waiting room. The family didn't know what to believe but soon the evidence was clear.Colton said he met his miscarried sister, whom no one had told him about, and his great grandfather who died 30 years before Colton was born, then shared impossible-to-know details about each. He describes the horse that only Jesus could ride, about how "really big" God and his chair are, and how the Holy Spirit "shoots down power" from heaven to help us.Told by the father, but often in Colton's own words, the disarmingly simple message is heaven is a real place, Jesus really loves children, and be ready, there is a coming last battle.

"A beautifully written glimpse into heaven that will encourage those who doubt and thrill those who believe."

Ron Hall, coauthor of Same Kind of Different as Me

"Do you remember the hospital, Colton?" Sonja said. "Yes, mommy, I remember," he said. "That's where the angels sang to me."

When Colton Burpo made it through an emergency appendectomy, his family was overjoyed at his miraculous survival. What they weren't expecting, though, was the story that emerged in the months that followed a story as beautiful as it was extraordinary, detailing their little boy's trip to heaven and back.

Colton, not yet four years old, told his parents he left his body during the surgery and authenticated that claim by describing exactly what his parents were doing in another part of the hospital while he was being operated on. He talked of visiting heaven and relayed stories told to him by people he met there whom he had never met in life, sharing events that happened even before he was born. He also astonished his parents with descriptions and obscure details about heaven that matched the Bible exactly, though he had not yet learned to read.

With disarming innocence and the plainspoken boldness of a child, Colton tells of meeting long-departed family members. He describes Jesus, the angels, how "really, really big" God is, and how much God loves us. Retold by his father, but using Colton's uniquely simple words, Heaven Is for Real offers a glimpse of the world that awaits us, where as Colton says, "Nobody is old and nobody wears glasses."

Heaven Is for Real will forever change the way you think of eternity, offering the chance to see, and believe, like a child.

Lynn Vincent is the New York Times bestselling writer of Same Kind of Different as Me, the story of the unlikely friendship between a wealthy white art dealer and a homeless African-American man; and Going Rogue: An American Life, the memoir of former Alaska governor and vice presidential candidate Sarah Palin.The author or coauthor of nine books, Vincent worked for eleven years as senior writer, then features editor, at the national news biweekly WORLD Magazine where she covered politics, culture, and current events. A U.S. Navy veteran, Lynn is also a lecturer in writing at the World Journalism Institute and at The King's College in New York City. She lives in San Diego, California.

Todd Burpo is the pastor of Crossroads Wesleyan Church in Imperial, Nebraska (Population: 1,762) where his sermons are broadcast locally every Sunday via the local radio station. He volunteers at Chase County Public Schools as wrestling coach for Junior high school students, as well as serving as a member of the school board. In emergencies Todd can be found working shoulder-to-shoulder with the Imperial Volunteer Fire Department as a fire fighter. He is also the chaplain for the Nebraska State Volunteer Firefighter's Association. To support his family, Todd also operates a company called Overhead Door Specialists. Todd graduated from Oklahoma Wesleyan University in 1991 with a BA in Theology. He was ordained in 1994.