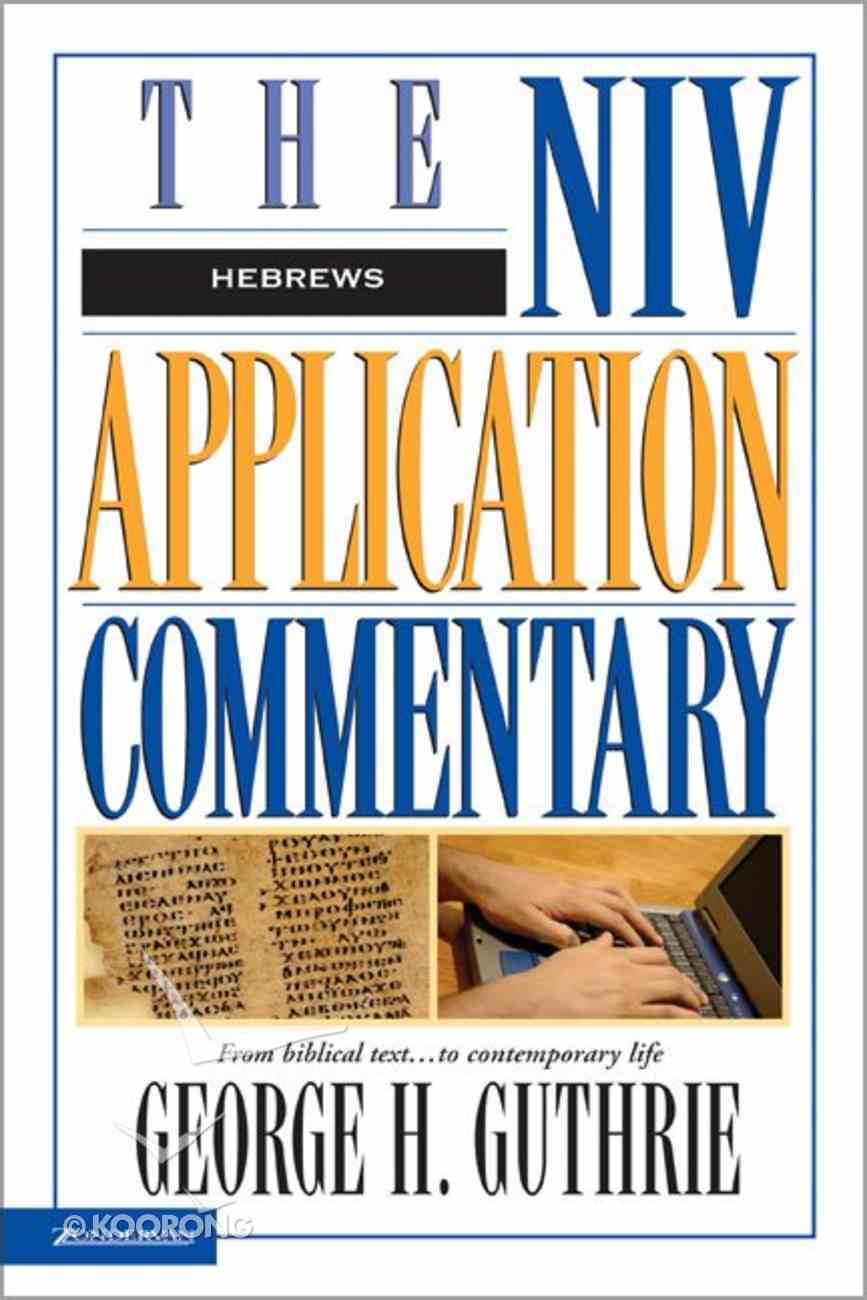 The book of Hebrews resonates with power, beauty, and theological depth. Though it may seem enigmatic upon a surface reading, it has much to offer the modern church. This commentary clarifies the author of Hebrews' own conventions in crafting the...

14 available
Expected to ship within 1 hour from Australia.
Learn More
Free Shipping
for orders over $99.

The book of Hebrews resonates with power, beauty, and theological depth. Though it may seem enigmatic upon a surface reading, it has much to offer the modern church. This commentary clarifies the author of Hebrews' own conventions in crafting the work to help readers learn how the message of Hebrews can have the same powerful impact today that it did when the author first wrote it. 468 pages, from Zondervan

Hebrews, which is part of the NIV Application Commentary Series, helps readers learn how the message of Hebrews can have the same powerful impact today that it did when the author first wrote it.
-Publisher

Most Bible commentaries take us on a one-way trip from the twentieth century to the first century. But they leave us there, assuming that we can somehow make the return journey on our own. In other words, they focus on the original meaning of the passage but don't discuss its contemporary application. The information they offer is valuable -- but the job is only half done! The NIV Application Commentary Series helps us with both halves of the interpretive task. This new and unique series shows readers how to bring an ancient message into modern context. It explains not only what the Bible means but also how it can speak powerfully today. The NIV Application Commentary series helps with both halves of Bible study. It builds a bridge from the past to the world we live in -- explaining not only what the Bible meant, but also how it can speak powerfully today.
-Publisher

George H. Guthrie (PhD, Southwestern Baptist Theological Seminary) serves as the Benjamin W. Perry Professor of Bible at Union University in Jackson, Tennessee. As a specialist in New Testament and Greek, he is the author of numerous articles and four books including the volume Hebrews in the NIV Application Commentary series.

Hebrews 1:1 -- 4 In the past God spoke to our forefathers through the prophets at many times and in various ways, but in these last days he has spoken to us by his Son, whom he appointed heir of all things, and through whom he made the universe. The Son is the radiance of God's glory and the exact representation of his being, sustaining all things by his powerful word. After he had provided purification for sins, he sat down at the right hand of the Majesty in heaven. So he became as much superior to the angels as the name he has inherited is superior to theirs. Because Hebrews begins like a sermon, without any mention of sender, addressees, or words of greeting, the author opens with a majestic overture, rhetorically eloquent and theologically packed. This beautifully constructed opening statement begins by contrasting the revelation given under the older testament economy with that given under the new. This contrast focuses on and climaxes in the person of God's Son --- heir, agent of creation, sustainer of the universe, Savior, and sovereign --- who now sits at the right hand of God. Although most translations, including the NIV, present this introduction in several sentences, Hebrews 1:1 -- 4 in Greek forms a single, multi-clause sentence, built around the main clause 'God . . . has spoken.' Thus God and his communication to humanity through the Son engage the author's attention from the first. These beautifully crafted verses fall into two main subdivisions, the first addressing divine revelation (1:1 -- 2a) and the second the person, work, and status of God's Son (1:2b -- 4). The Climax of Divine Communication (1:1 -- 2a) The author begins by presenting divine revelation in parallel contrasts between the 'older' communication during the time of the prophets and the 'newer' communication through the Son. He contrasts four areas: the era of the revelation, the recipients, the agents, and the ways in which the revelation was manifested. Older Communication -- Newer Communication Era -- in the past -- in these last days Recipients -- to our forefathers -- to us Agents -- through the prophets -- by his Son Ways -- in various ways -- in one way (implied) The eras mentioned contrast two time frames. The time 'in the past' (or 'formerly') refers to the time prior to the coming of Messiah, and correspondingly, the coming time was seen as initiating 'the last days.' The author uses the adjective 'these' (touton) in verse 2, expressing the Christian conviction that the last days have been initiated already. Divine revelation came 'to our forefathers [i.e., those under the older covenants] through the prophets.' The latter phrase should not be understood as narrowly referring to those designated as the 'major' and 'minor' writing prophets of our Old Testament. Rather, the author considers all through whom God manifested his will as owning the prophetic mantel, although the manner of these prophesies varied considerably. As to the manner of the divine revelation, it was 'at many times' (polymeros) --- that is, it was temporally fragmented rather than in a complete package --- and 'in various ways' (polytropos), a word that suggests the diversity of forms of that revelation. The suggestion brings to mind Old Testament commands, exhortations, stories, visions, dreams, mighty acts, breathtaking theophanies, and a still small voice, to name a few. This older revelation was expansive but incomplete. By contrast, the revelation of these last days has come 'to us,' the receptors of the Christian message. It constitutes God's climactic communication to humanity and has been brought via God's Son; that is, rather than being fragmentary and varied, it may be considered whole, focused in the person and work of Christ. The author included no article prior to the word 'Son' (huio). Whereas in many languages this may suggest that Jesus is merely one son in a crowd of sons, the emphasis here is on the unique relationship of Jesus with the Father --- one who relates to him as son. Whereas the prophets of old were many, the bearer of God's word for the last days was uniquely qualified for the responsibility. The author's statement should not be understood as concentrating only on the teachings of Jesus, although the words of Christ are vitally important to him (2:3 -- 4). Rather, the whole of the incarnation --- person, words, and acts --- should be understood as communicating God's ultimate word to his new covenant people.

Hebrews For You: Giving You An Anchor For the Soul (God's Word For You Series)
Michael J Kruger
Paperback