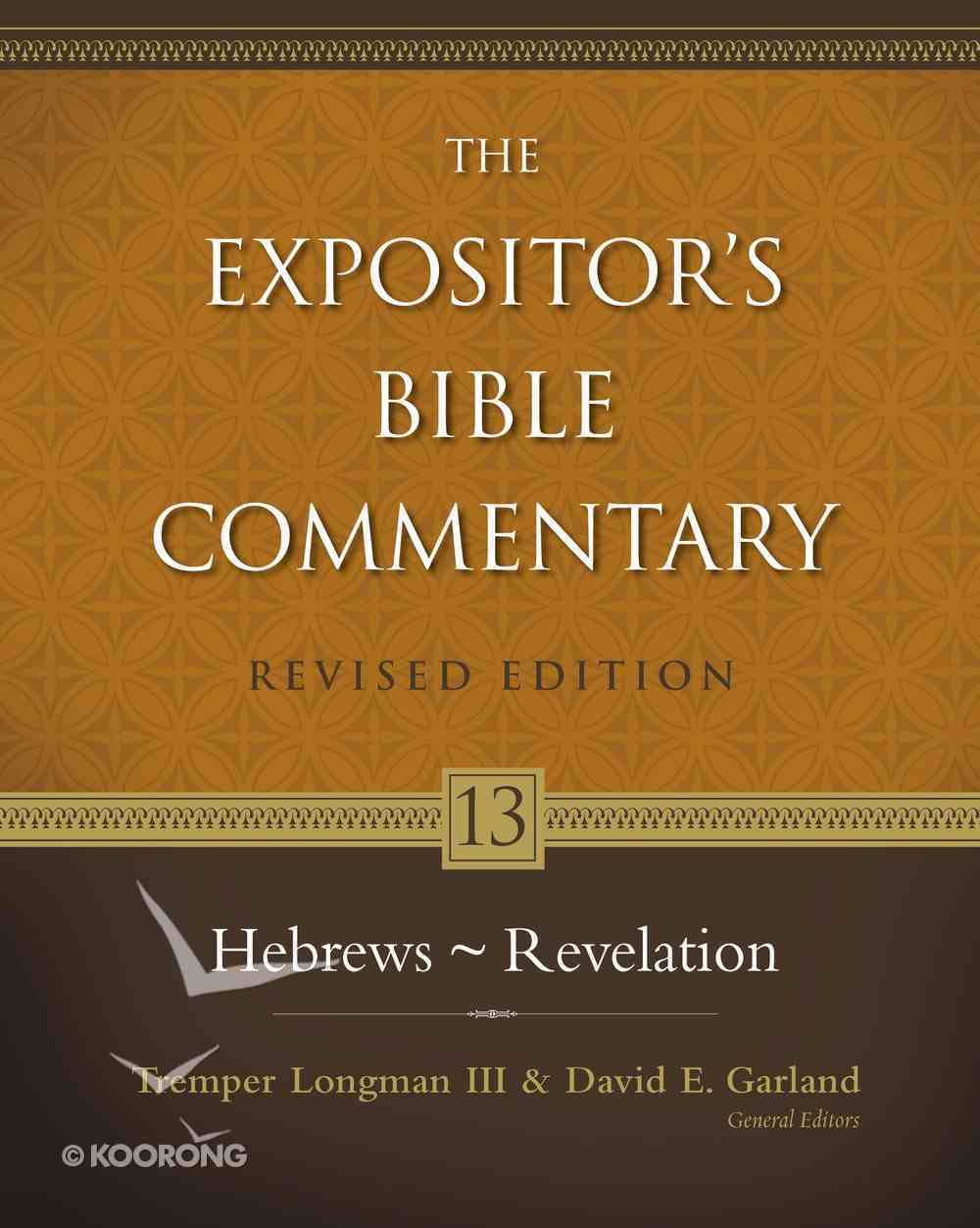 Continuing a Gold Medallion Award-winning legacy, this completely revised edition of The Expositor's Bible Commentary series puts world-class biblical scholarship in your hands. Based on the original twelve-volume set that has become a staple in college and seminary libraries and...

Continuing a Gold Medallion Award-winning legacy, this completely revised edition of The Expositor's Bible Commentary series puts world-class biblical scholarship in your hands. Based on the original twelve-volume set that has become a staple in college and seminary libraries and pastors' studies worldwide, this new thirteen-volume edition marshals the most current evangelical scholarship and resources. You'll find up-to-date information grounded in the same unchanging commitment to the divine inspiration, complete trustworthiness, and full authority of the Bible. Of the fifty-six contributors, thirty of them are new. Reflecting the Expositor's Bible Commentary international and cross-denominational approach, they come from the United States, Canada, England, Scotland, Australia, and New Zealand, and from a broad diversity of churches, including Anglican, Baptist, Brethren, Methodist, Nazarene, Presbyterian, and Reformed. The Expositor's Bible Commentary uses the complete New International Version for its English text, but it also refers freely to other translations and to the original languages. For each book of the Bible, the thoroughly revised features consist of:

- A comprehensive introduction
- A short and precise bibliography
- A detailed outline
- Insightful exposition of passages and verses
- Overviews of sections of Scripture to illumine the big picture
- Occasional reflections to give more detail on important issues
- Notes on textual questions and special problems, placed close to the text in question
- Transliteration and translation of Hebrew and Greek words, enabling readers to understand even the more technical notes
- A balanced and respectful approach toward marked differences of opinion.

This is a complete revision of the Gold Medallion-winning commentary series. It is up to date in its discussion of theological and critical issues and thoroughly evangelical in its viewpoint.
-Publisher

The Expositor's Bible Commentary: Hebrews-Revelation Copyright 2006 by the Zondervan Corporation Requests for information should be addressed to: Zondervan, Grand Rapids, Michigan 49530 Library of Congress Cataloging-in-Publication Data The expositor's Bible commentary / [general editors], Tremper Longman III and David E. Garland.-Rev. p. cm. Includes bibliographical references. ISBN-10: 0-310-26894-X (hardcover) ISBN-13: 978-0-310-26894-9 (hardcover) 1. Bible. N.T.-Commentaries. I. Longman, Tremper. II. Garland, David E. BS2341.53.E96 2005 220.7-dc22 2005006281 This edition printed on acid-free paper. All Scripture quotations, unless otherwise indicated, are taken from the Holy Bible: New International Version. NIV. Copyright 1973, 1978, 1984 by International Bible Society. Used by permission of Zondervan. All rights reserved. Scripture quotations marked NASB are taken from the New American Standard Bible, Copyright 1960, 1962, 1963, 1968, 1971, 1972, 1973, 1975, 1977, 1995 by The Lockman Foundation. Used by permission. All rights reserved. No part of this publication may be reproduced, stored in a retrieval system, or transmitted in any form or by any means-electronic, mechanical, photocopy, recording, or any other-except for brief quotations in printed reviews, without the prior permission of the publisher. Interior design by Tracey Walker Printed in the United States of America 06 07 08 09 10 11 12 - 10 9 8 7 6 5 4 3 2 1 The first four verses of Hebrews form a single Greek sentence. By the end of the sentence,we have already been introduced to the theme of the superiority of the Son to angels, which will remain in focus throughout the rest of chs. 1-2.To impose a section break between vv.3 and 4 is therefore to favor a thematic analysis of the text over its grammatical form. My reason for doing so is that the contrast with the prophets with which the sentence opens (and which will not be made explicitly again in the rest of the letter) serves to set the scene more broadly than just in relation to angels and provides our author with the cue for his most powerful christological statement-indeed one of the three or four most striking accounts in the NT of the incarnate Son of God. The theme and indeed much of the language of vv.2-3 is closely parallel to what is said about the role of the Word/Son in creation and revelation in John 1:1-18 and especially Colossians 1:15-20. Text and Exposition I. Better Than the Prophets (1:1-3) Overview 1In the past God spoke to our forefathers through the prophets at many times and in various ways, 2but in these last days he has spoken to us by his Son, whom he appointed heir of all things, and through whom he made the universe. 3The Son is the radiance of God's glory and the exact representation of his being, sustaining all things by his powerful word.After he had provided purification for sins, he sat down at the right hand of the Majesty in heaven. Commentary 1-2a One of the chief glories of OT religion was its prophetic tradition. Israel lived not by human insight but by divine revelation as God "spoke through the prophets." Our author has no wish to belittle this privilege, and he will quote from those same prophets later in the course of his argument. But now God has provided something even better. The prophets were many and varied, and their revelations came to the forefathers sporadically over a considerable period. But now their place has been taken by a single spokesman, whose message has been delivered once-for-all "in these last days" (lit., "at the end of these days," echoing the OT formula "in the end of the days," Ge 49:1; Isa 2:2; etc.).The period of preparation is over, and all that the prop
-Publisher

David Garland, Ph.D. (Southern Baptist Theological Seminary) is William B. Hinson professor of Christian Scriptures and associate dean for academic affairs at George W. Truett Seminary, Baylor University. He is the New Testament editor for the revised Expositor's Bible Commentary and the Zondervan Exegetical Commentary of which he is writing the inaugural volume on The Gospel of Luke. He is the author of various books and commentaries, including Mark (an award winner) and Colossians/Philemon in the NIV Application Commentary, the article on Mark in the Zondervan Illustrated Bible Backgrounds Commentary, 2 Corinthians in the New American Commentary, 1 Corinthians in the Baker Exegetical Commentary of the New Testament which was highly awarded. He and his wife, Diana, with whom he has co-authored a number of titles on family and ministry, reside in Waco, Texas.


Longman is the author of How to Read Genesis, How to Read the Psalms, How to Read Proverbs and Literary Approaches to Biblical Interpretation, and co-editor of A Complete Literary Guide to the Bible and co-author with Dan Allender of Bold Love, Cry of the Soul, Intimate Allies, The Intimate Mystery and The Intimate Marriage Bible Studies.

Hebrews For You: Giving You An Anchor For the Soul (God's Word For You Series)
Michael J Kruger
Paperback