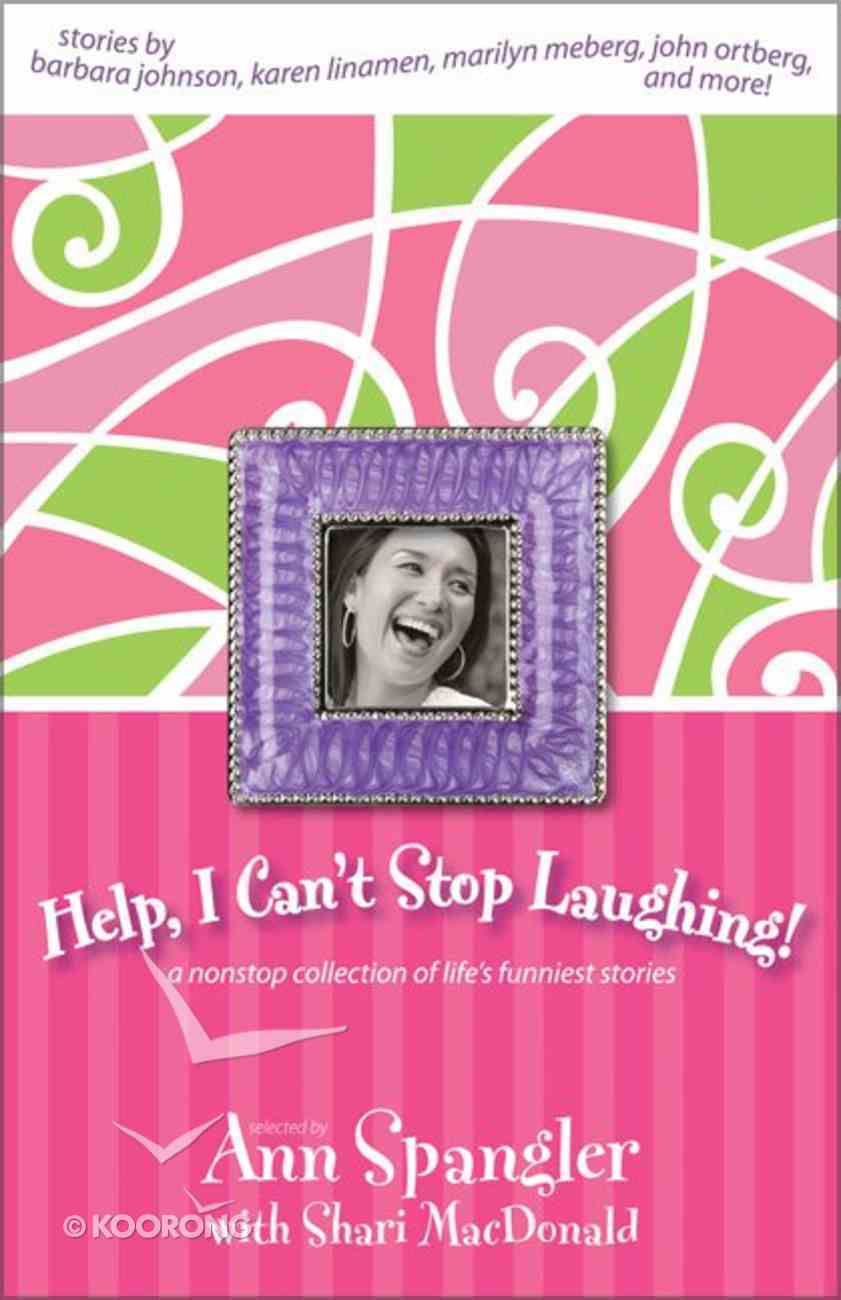 But be forewarned, once you start, you may not be able to stop! Help, I Can't Stop Laughing! offers a collection of nonstop fun, foibles, and rib-tickling humor for those who know that laughter is the best medicine. Contributors like...

Stick a Geranium in Your Hat and Be Happy! (2004)
Barbara Johnson
Paperback

But be forewarned, once you start, you may not be able to stop! Help, I Can't Stop Laughing! offers a collection of nonstop fun, foibles, and rib-tickling humor for those who know that laughter is the best medicine. Contributors like Barbara Johnson, Martha Bolton, Mark Lowry, Patsy Clairmont, Becky Freeman, and Chonda Pierce share their most hilarious and embarrassing moments to remind you that God's love and a little laughter will keep you smiling no matter what curves life throws you. This cheerful collection of quips, stories, anecdotes, and quotes offers a continual source of refreshment in the midst of life's struggles and stresses. Let the laughter begin!
-Publisher

ContentsPreface / 11Chapter One: If Image Were Everything, We''d Be in Big TroubleWild Mama by Rachael Phillips / 15Maybe They''re Just Young at Heart by David L. Reese / 17The Truth Hurts by Various Authors / 18Adorable, Schmorable! by Julie Ann Barnhill / 19Oh, Baby! by Rachael Phillips / 22"Pledging" Her Love by Michele Howe / 24The Spitting Preacher by Mark Lowry / 25People in Glass Houses... by Connie Pettersen / 27Chapter Two: Church ChucklesI Just Dropped Back In to Mention One Last Thing / 31by Brandon MoodyBulletin Bloopers by Anonymous / 32Fuel for Faith by Dan Clark / 34To Tell the Truth by Gracie Malone / 35Distracted by Mark Buchanan / 36What Do They Say When They''re Playing "House"? / 37by Kathleen EakinWe''re More Divided Than We Thought by Anonymous / 38Church Feuds by Anonymous / 39Laughter Isn''t the Only Thing That''s Contagious / 40by Clara NullWe Thought It Was the Holy Spirit by Harry Grob / 41"Dear Lord..." by Anonymous / 42Chapter Three: Fun with Furry and Feathered(Even Scaly and Creepy) FriendsKitty Flight by Anonymous / 45Where Did Mama Go? by Karen Scalf Linamen / 46Dogs and Cats by Anonymous / 49The Well by Anonymous / 51Rules for Cats by Anonymous / 52Unwelcome Guests by Mark Buchanan / 54The Difference between Dogs and Cats by John Ortberg / 57Dead Duck by John William Smith / 58Chapter Four: Just for Kicks and GigglesFunny Bumper Stickers by Anonymous / 63Speeding by Anonymous / 64How to Get Time Off from Work by Anonymous / 66Insurance Claims - Short Responses by Anonymous / 67Kids and Science by Anonymous / 68Things You''d Rather Not Hear During Surgery / 69by AnonymousTrue Comments from Actual Employee Performance Reviews / 70by AnonymousChapter Five: The Mind Is a Terrible Thing to Waste"Mentalpause" by Mary Pierce / 73He Could Have Just Said, "And Now, Ladies, Praise . . ." / 79by John OrtbergA Gentle Answer by Marsha Marks / 81Living at Geriatric Junction by Barbara Johnson / 82Prayers of a Passenger by Barbara Johnson / 85Chapter Six: It''s All in How You Look at It (and Laugh at It)Deception in the Perception by Gwendolyn Mitchell Diaz / 89Let''s Face It by Marilyn Meberg / 91Don''t Push the Button by Patsy Clairmont / 93Truck-Stop Rose by Chonda Pierce / 94Plane Perception by Dan Clark / 97If You''re Happy and You Know It...by Barbara Johnson / 98Ghost Story by Anonymous / 99Chapter Seven: Kid StuffThe Toddler''s Diet by Anonymous / 103Things I''ve Learned from My Children by Anonymous / 105Keeping Her Focus by Arnell Arntessoni / 107Alterations by Hester Jones / 108When Laughter Stings by Mark Twain / 109Are We There Yet? by Martha Bolton / 111Labor Intensive by Shirley Clutter / 113It''s Been an Even Busier Week Than He Thought / 114by Stella Ward WhitlockSide by Side by Sharon K. / 115Church Kids by Various Authors / 116Chapter Eight: Dad''s a Hoot!Laughing Matters by Phil Callaway / 121The Car of My Schemes by Dave Meurer / 122While You Were Away by Anonymous / 125Alien Impostor Boys by Dave Meurer / 126Like Father, Like Son by Reverend Ronald B. Hughes / 130What a Character! by Dave Meurer / 131Easy-to-Clobber by John Ortberg / 133Too Many Questions by Brenda Nixon / 134Chapter Nine: Mom''s Always Good for a LaughPick Your Battles . . . Veeery Carefully by Julie Ann Barnhill / 137A Mother-Mortification Moment by Marti Attoun / 138Sprinkles of Grace by Carol Kuykendall / 140Heir-Conditioning by Barbara Johnson / 142Check, Please! by Marti Attoun / 144The Strong-Willed Mother by Kim Wier / 146Attention, Children: The Bathroom Door Is Closed! / 148by Becky FreemanInjured Innocence by Mark Twain / 149A Mother Can''t Help Worrying by Mark Twain / 150Chapter Ten: Adventures in MatrimonyNuptial Humor by Various Authors / 153Mom''s Last Laugh by Robin Lee Shope / 157Get on Your Trike and Ride by Ken Davis / 159Chapter Eleven: Laughter: The Secret to a Good MarriageOops! by William Ritner / 163She''s Got Her Bases Covered by Dan Clark / 164Five Golden Decades...Give or Take a Day or Two / 165by Ursula Turner
-Publisher

Help, I Can't Stop Laughing! Honest criticism is hard to take, particularly from a relative, a friend, an acquaintance, or a stranger. --- Franklin P. Jones I refuse to think of them as chin hairs. I think of them as stray eyebrows. --- Janette Barber Clothes make the man. Naked people have little or no influence on society. --- Mark Twain If Image Were Everything, We'd Be in Big Trouble Wild Mama Rachael Phillips Sleeping in --- an unknown luxury, a fairy-tale fantasy that inevitably dissolved in a shower of Cheerios and the wiggles and jiggles and messy, precious kisses of my preschoolers. Sleeping in existed in a different solar system --- or perhaps in a different galaxy far, far away. But those thoughts evaporated as I lay in a bed I wouldn't have to make, savoring the ecstasy of a quiet --- yes, quiet --- sixteenth story hotel room. My husband had already left for his conference, and I indulged in forbidden pleasures: a cup of real coffee (double cream) in bed, steaming hot from the first mellow sip to the very last; a television program in which most people already knew how to count to ten; and a long, sinful bath filled to the top, with no Mr. Bubble or rubber duckies in sight. After bathing, I ignored my ratty plaid bathrobe hanging on the hook. I didn't decide what to wear. Instead, I wandered around the room, carefree and content as Eve in the Garden of Eden, unhampered by diaper bags, car seats, nap times, or must-have blankies. I pondered how I would spend an entire day without children or Happy Meals. Intoxicated with my liberty, I forgot my mother's advice to always close the drapes and faced the room-sized picture windows. The panoramic view of city streets and smaller buildings far below dazzled my eyes, my soul. Embracing the endless azure sky, I sang, 'I'm free! Free!' 'Chuk-chuk-chuk-chuk-chuk!' A dragonfly the size of a sixties Cadillac suddenly hovered by the window. I hit the floor as if attacked by enemy fire, yanking the bedspread (too late!) across my naked, prostrate form. The traffic helicopter pilot waved. Then he and his mighty machine swept off to corners of the universe where other derelict mothers in need of reform might lurk. I pulled the blanket over my head and groaned. Mortification stuffed my throat like a giant spoonful of crunchy peanut butter. I felt a hot strawberry flush from my toes to my eyebrows. Not counting God, only my husband and my doctor had seen me in the buff; now a nameless helicopter pilot in Cleveland shared that...er...privilege. Him and who else? I grabbed my heart and my ratty plaid bathrobe and edged toward the window. Praise be. No Blue Angel precision jet formations screaming into view, scouting for the Miss Thunder Thighs competition. I closed the drapes, then donned a pair of khakis and my highest-necked sweater. I started my makeup routine. No blush needed today! I didn't dare turn the radio on as usual. Couldn't bear to think of that friendly pilot's nine o'clock traffic report. 'Great view over the city,' he'd say. 'Why, I can see clear to next Tuesday. No accidents downtown, but hey, cover up --- er, buckle up! --- for safety, and slow down for those curves!' Or maybe he'd give a few cute weather tips: 'Sunny, but chilly. Dress in layers. At least one.'