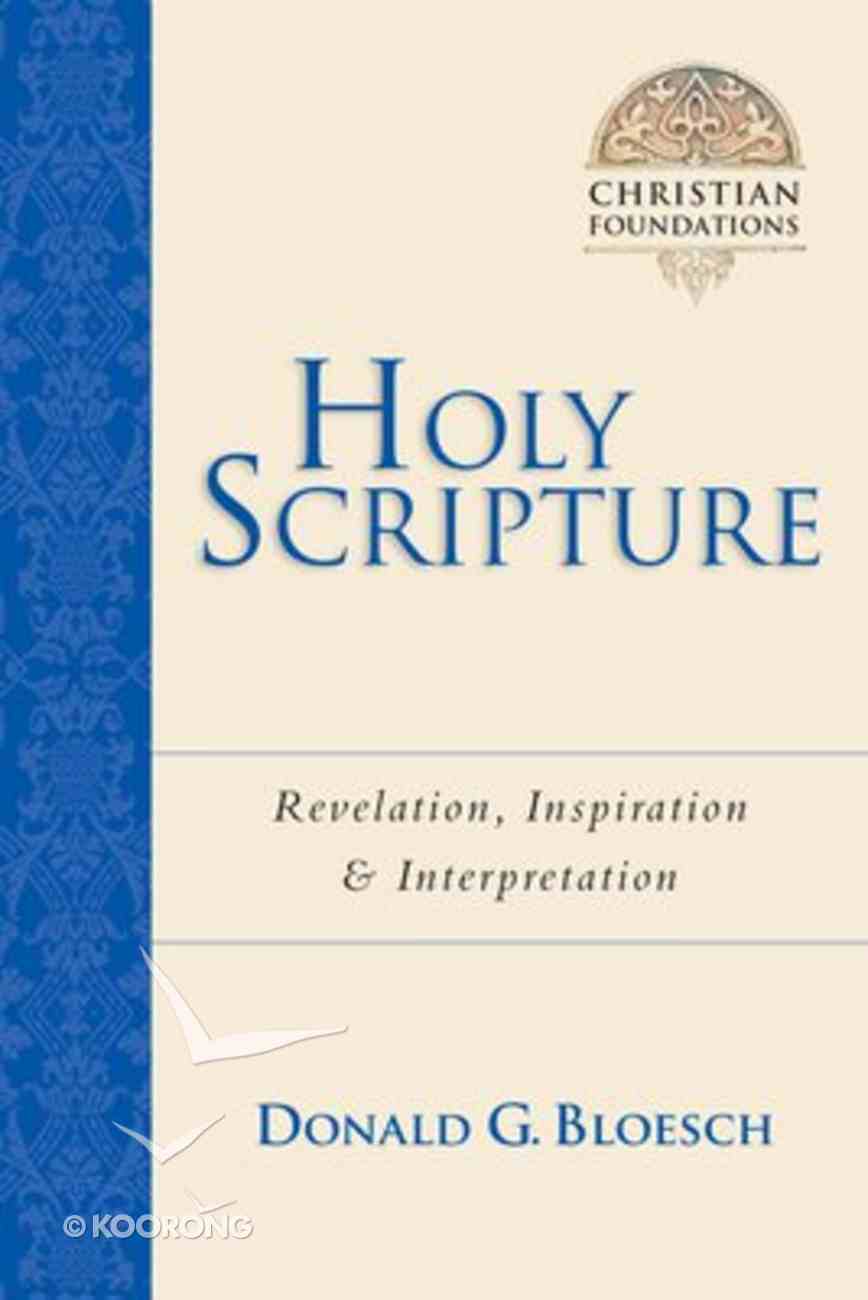 In Holy Scripture, Donald G. Bloesch sets out the pivotal evangelical doctrines of the Bible's revelation, inspiration and interpretation. Wishing to "defend the orthodox evangelical faith from its friends as well as its enemies," Bloesch provocatively argues against...

In Holy Scripture, Donald G. Bloesch sets out the pivotal evangelical doctrines of the Bible's revelation, inspiration and interpretation.

Wishing to "defend the orthodox evangelical faith from its friends as well as its enemies," Bloesch provocatively argues against both evangelical rationalism and liberal experientialism. And he proposes the alternative of biblical evangelicalism--which sees Scripture as the written Word of God but stresses that it becomes the living Word of God only through the illumination of the Holy Spirit.

In dialogue with Martin Luther, John Calvin, P. T. Forsyth, Karl Barth and Emil Brunner, Bloesch's Holy Scripture examines the implications of biblical authority for the twenty-first century. It surveys the role of the Bible as seen within the Bible itself and as that role has unfolded through centuries of Christian tradition. It also explains and critiques many highly contested issues, such as the value of biblical criticism, the meaning of myth, the plethora of hermeneutical options and the nature of truth.
-Publisher.

In The Holy Spirit: Works & Gifts Donald Bloesch aptly brings his grasp of historical and systematic theology together with his deep concern for spirituality. The fruit of a lifetime of study and devotion, this work masterfully interweaves biblical study, historical overviews, and reflection on contemporary developments and issues to shed light on faith in God the Holy Spirit. On a topic that sadly threatens to divide the church, Bloesch strives to build bridges between the various traditions of Christian faith, especially between Reformed theology and the Pentecostal movement.^Building on the inaugural volume of the Christian Foundations series, A Theology of Word & Spirit, Bloesch guards against the equal dangers of a subjective spiritualism and a cold formalism. He speaks out of the perspective of the Protestant Reformation with its emphasis on the complementarity of Word and Spirit and the priority of grace over works. But he also acknowledges the Pentecostal perception that the
-Publisher

Donald G. Bloesch (Ph.D., University of Chicago) is professor of theology emeritus at Dubuque Theological Seminary in Dubuque, Iowa. He has done postdoctoral work at the universities of Oxford, Tubingen and Basel and has written numerous books, including Faith and Its Counterfeits, Christian Foundations Series, Evangelical Theology in Transition, Theological Notebook Volume 3, Essentials of Evangelical Theology, The Future of Evangelical Christianity, The Struggle of Prayer and Freedom for Obedience. He is also a past president of the Midwest Division of the American Theological Society.